The increase in crypto-assets prices at the beginning of the week, the uncertainty related to the Ukraine-Russia war and the overall current macroeconomic picture continue to negatively affect the market. However, investors’ market sentiment is slowly improving, or at least not losing ground.

The Crypto Fear & Greed Index was mostly neutral over the course of last week until this Wednesday, when the index scored 52/100. On Thursday, the index was indicating more fearful crypto market sentiment at 34/100, which remained fearful but slightly improved on Friday with 37/100.

The crypto market has managed to recover well from the uncertainty and fear of the past four months, but it’s still far from the high values of its all-time highs. The war in Ukraine is still ongoing and inflation keeps giving cause for concern to companies and consumers in Western nations. 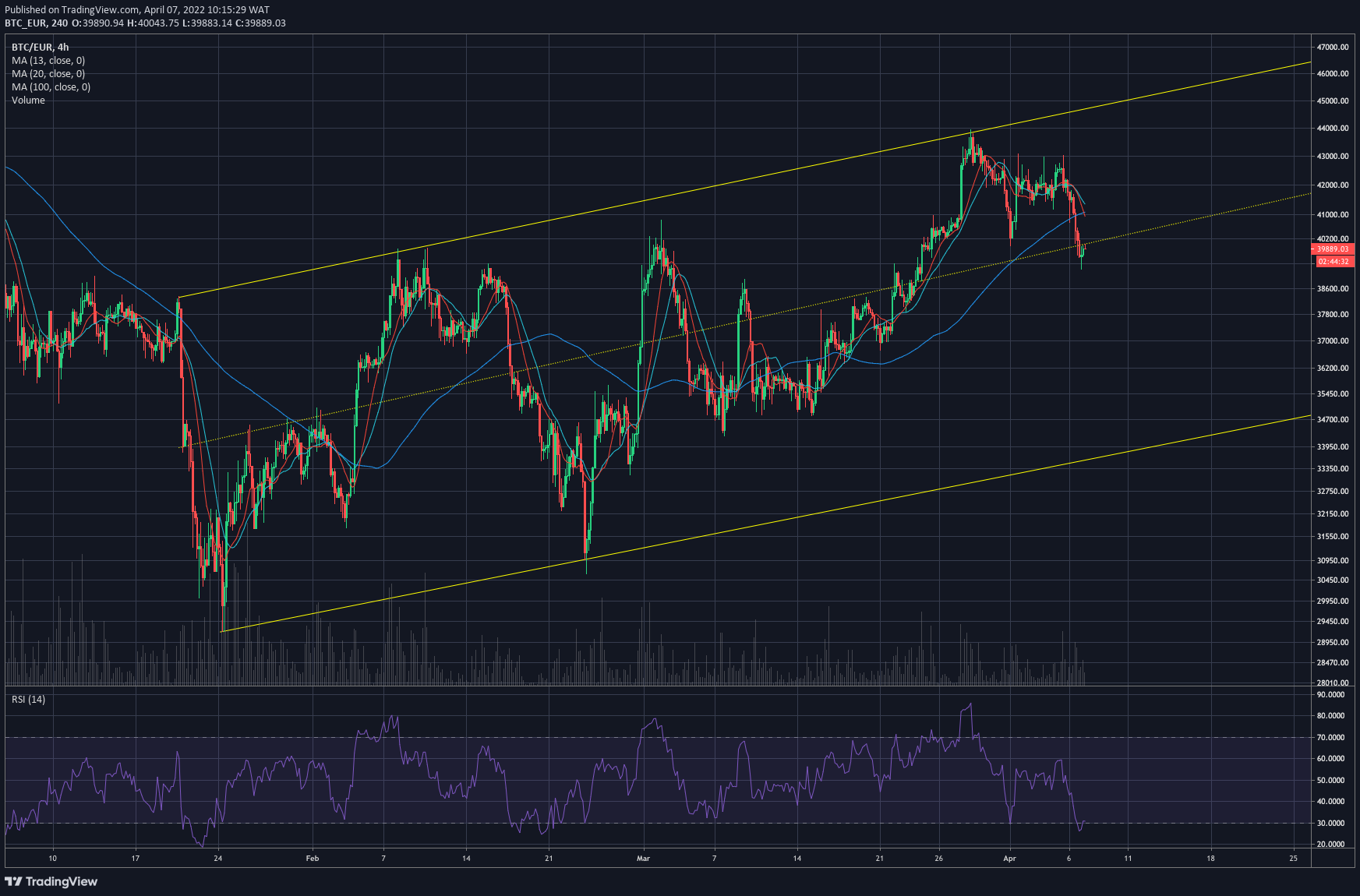 Some bumps on the road for Bitcoin’s uptrend

Bitcoin closed in the green on the weekly chart and posted bullish candles over the weekend. However, the uptrend reversed in the middle of the week after multiple members of the Federal Reserve suggested that fighting inflation would require harsh raises in interest rates and cuts on bond purchases. BTC and several altcoins dropped below their strong support levels, a sign that the recent bullish momentum has lost some of its strength, though price action still represents a pullback in the recent rally and does not represent bearish market movement. 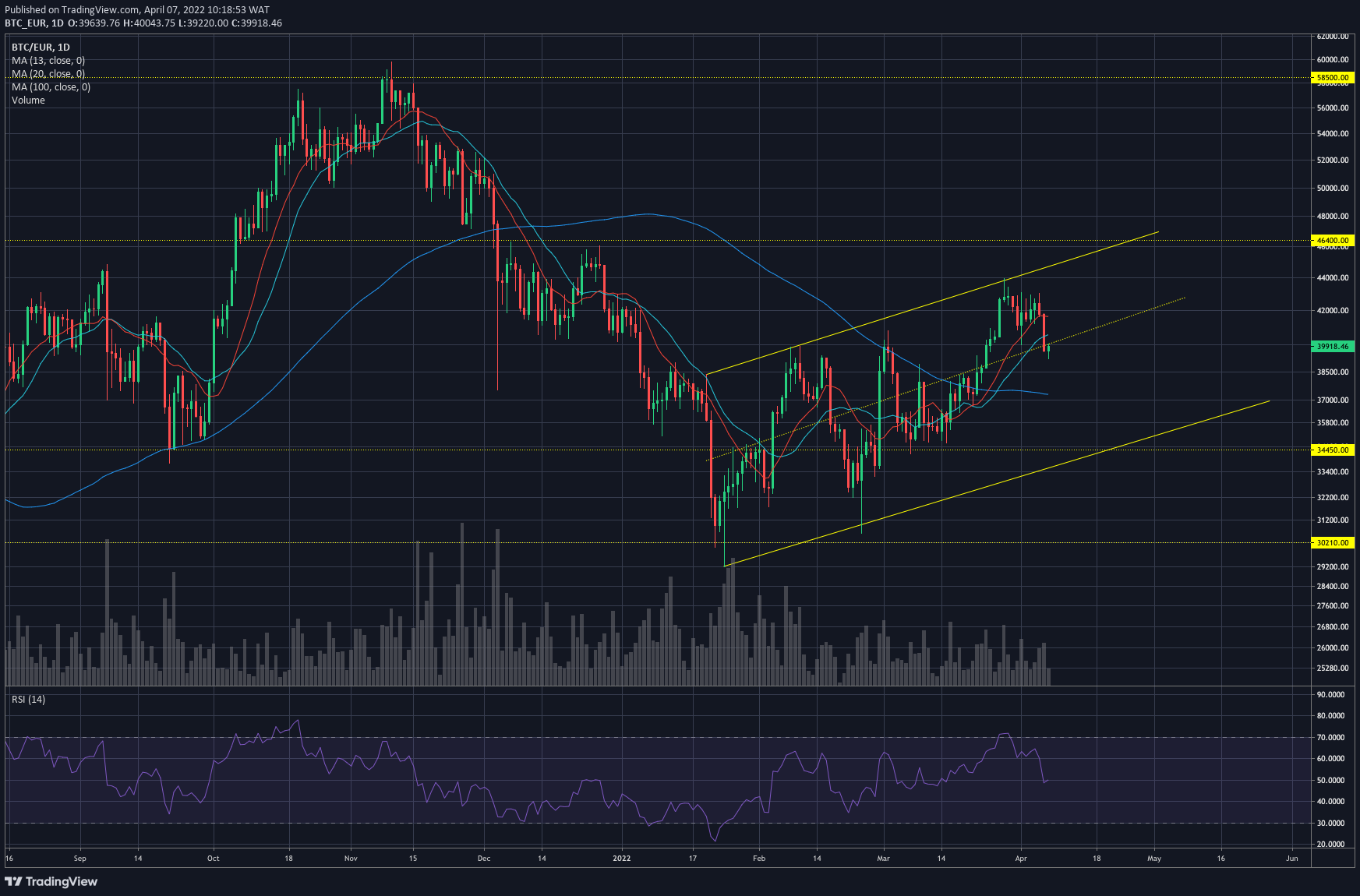 On a higher time frame, Bitcoin is still maintaining a higher-low, higher-high formation, indicating that the upward trend is still prevailing.

Statistically, April tends to be a bullish month for the crypto market. In fact, April’s returns have historically had the best performance of any other month in the year on average in the financial markets. With the season on the bullish side, investors are hoping for Bitcoin to close April with a higher candle than March.

Ethereum trading near its year high

This new quarter started well for the bulls as all major altcoins moved positively. Ethereum touched the €3,200 level, trading just under its highest price for this year. ETH price action looks bullish in all higher time frames, but some uncertainty appears in the lower time frames. 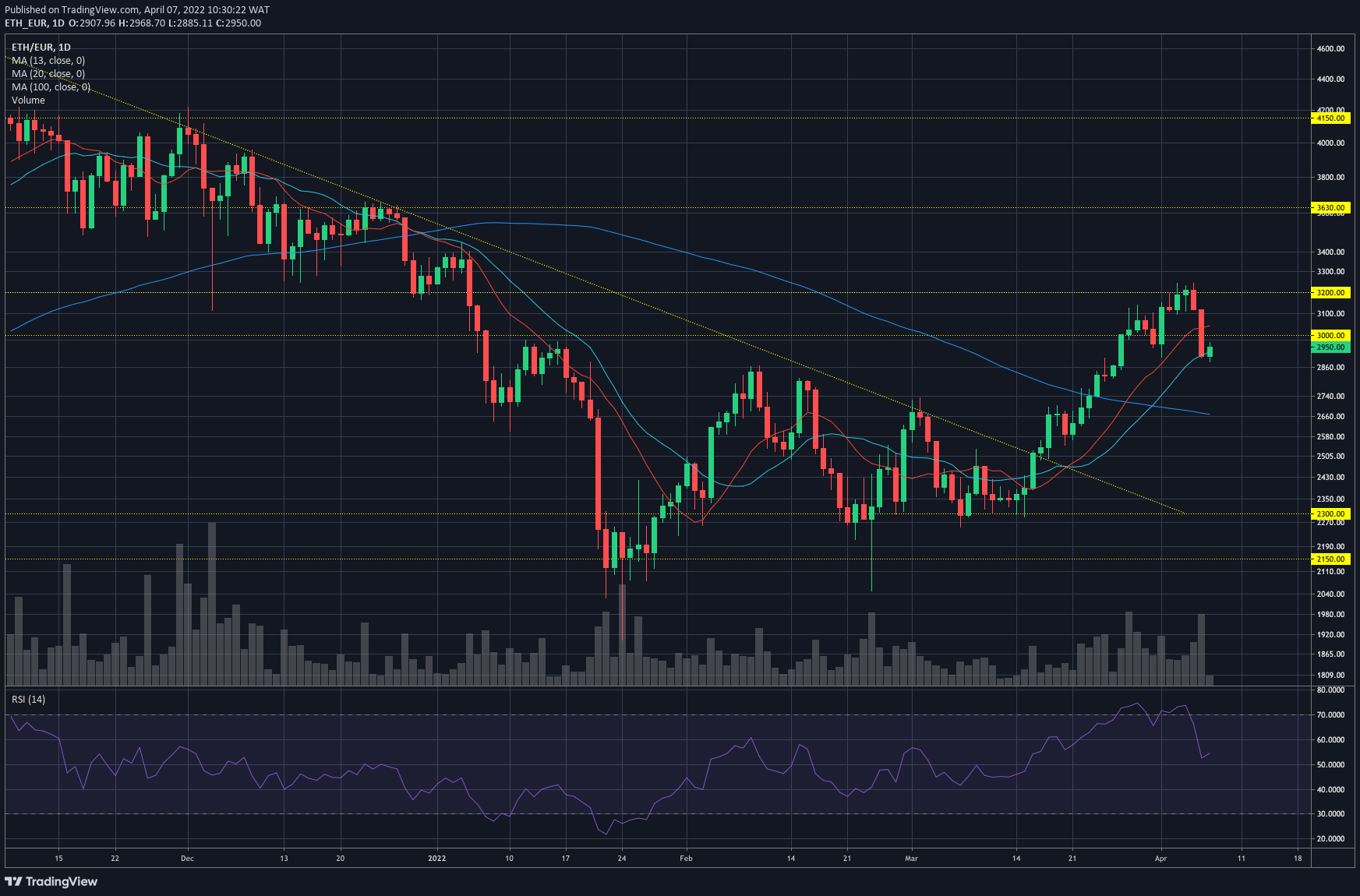 Ethereum formed a local top and started a decline below the €3,200 level where bears gained momentum for an attempt to move below the €3,000 level. The RSI is in oversold territory in the intra-day chart and bullish swings from this region are a possibility.

BEST successfully broke out from its falling wedge pattern and surged around 10% in the last seven days.

The falling wedge is a bullish pattern that begins wide at the top and contracts as prices move lower. This price action forms a cone that slopes down as the reaction highs and reaction lows converge. 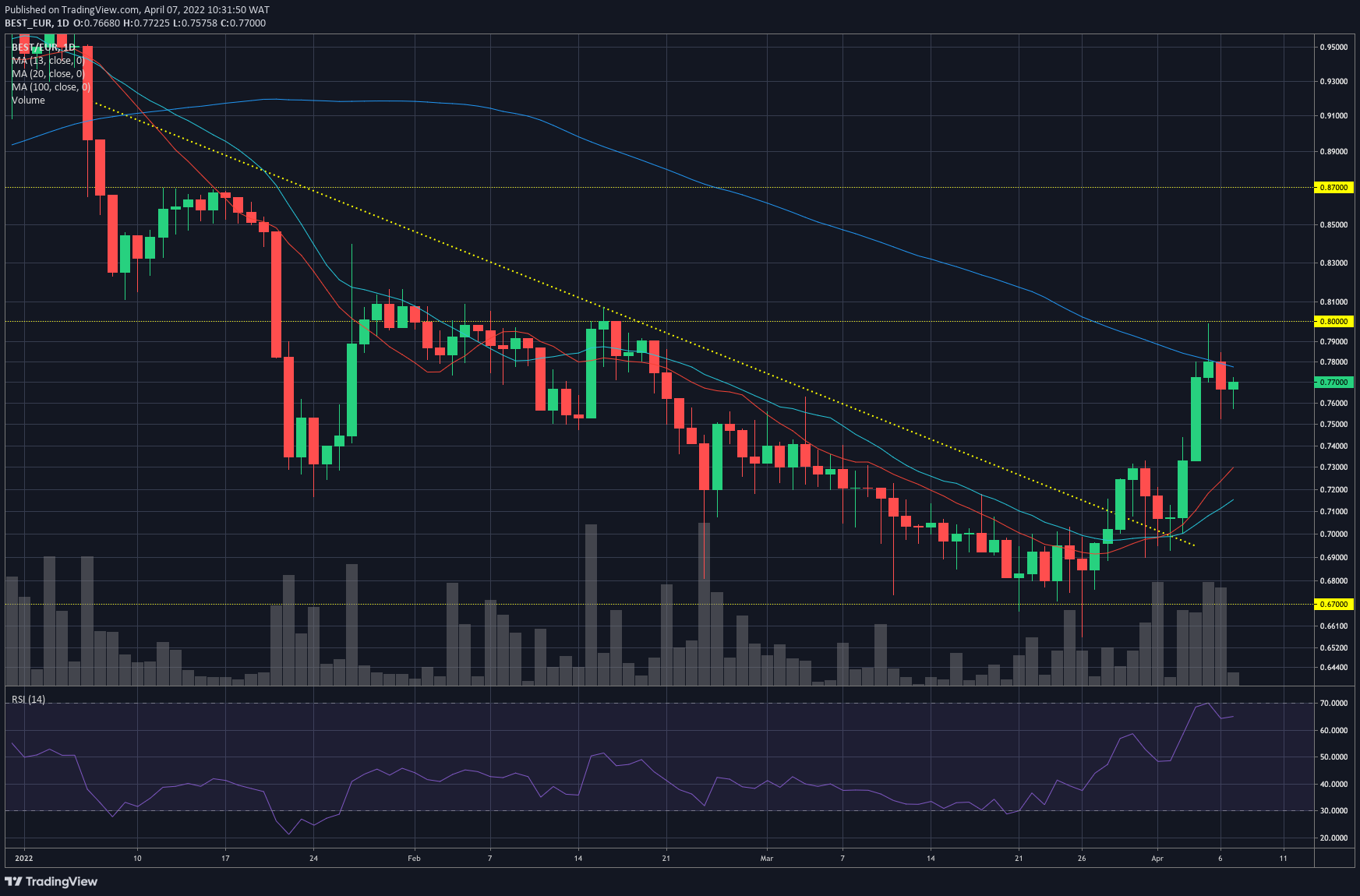 The pattern is considered a reversal pattern, as the contraction of the range indicates the downtrend is losing steam. BEST touched a resistance level of €0.8, but failed to cross it this time. Momentum indicators are still pointing upwards with the RSI trending well above 50 level.

ApeCoin is trading in a channel pattern and trying to find some support levels after the initial token launch last month. The price is moving down the channel and under the resistance point at €10.5 and is approaching the €9.6 support level. Volatility created large wicks in the daily chart. 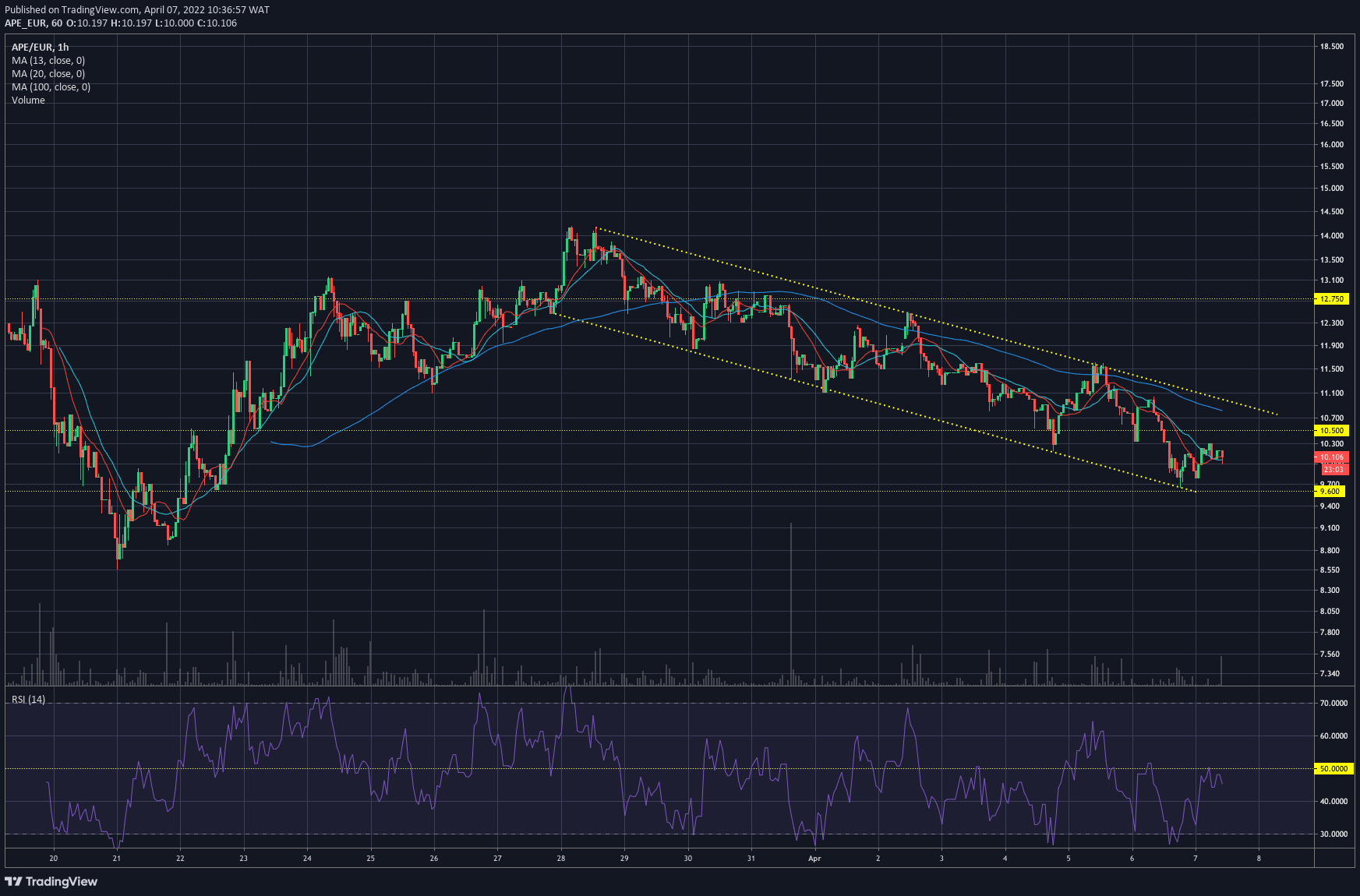 ApeCoin is a decentralised project inspired by Yuga Labs’ Bored Ape Yacht Club project. It is an ERC20 governance and utility token used within the APE ecosystem to empower a web3 decentralised community.

DOGE rallied almost 30% after Tesla CEO, Elon Musk, announced he will be joining Twitter's board of directors. Data shows DOGE gained approximately 50% in the last 30 days, but failed to sustain the rally. The price dropped to the support zone near €0.12. 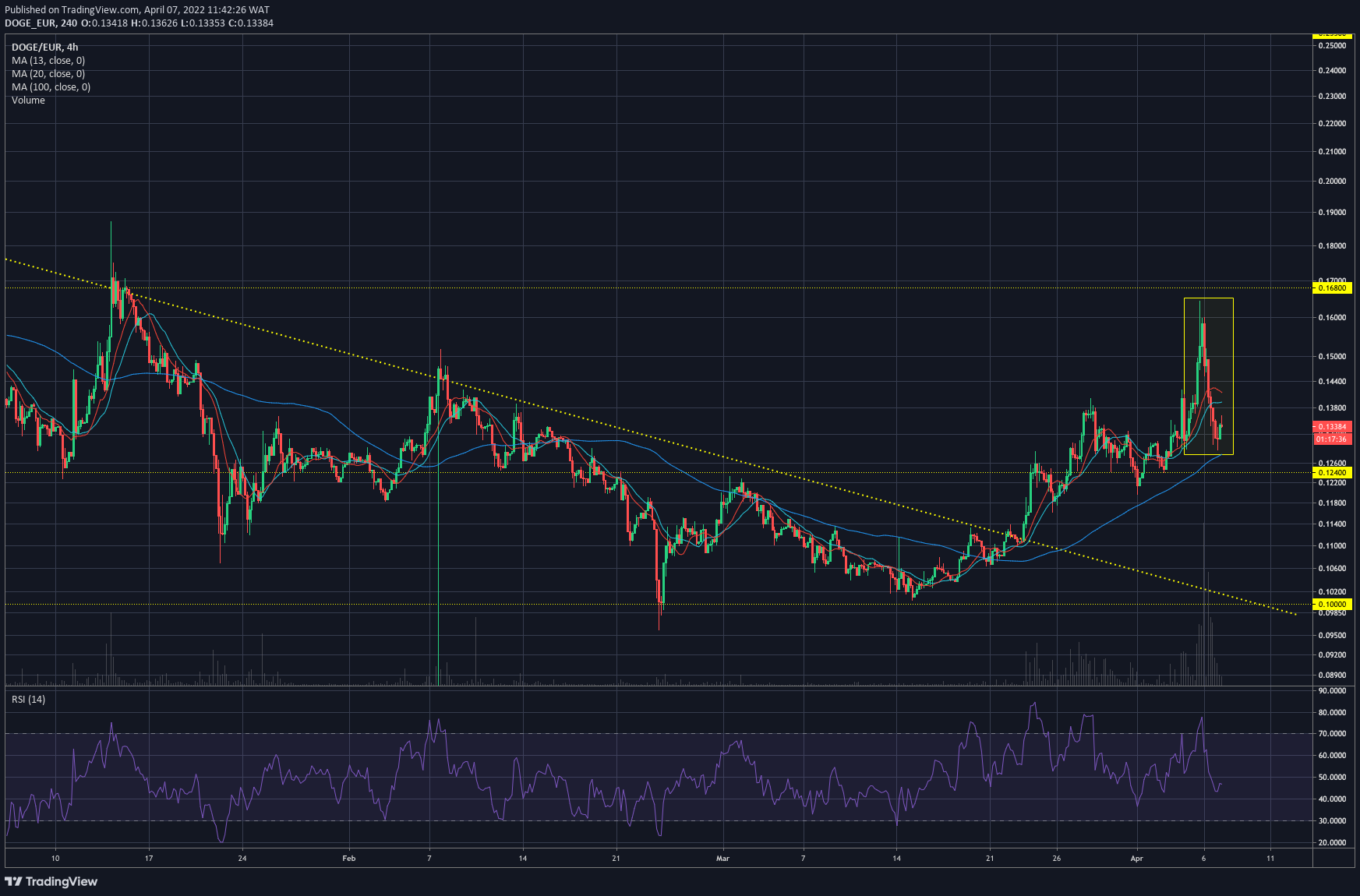 Elon Musk bought a 9.2% stake in Twitter, making him the largest shareholder in the company with more than four times the stake of the platform’s founder, Jack Dorsey, with a stake of 2.25%.

ADA’s price is holding the support level above the falling trendline after breaking out from the descending wedge. The recent price increase is supported by large volumes. The 13- and 20-day moving averages are acting as the first layers of support on the daily chart, where bulls will try to defend the price levels. 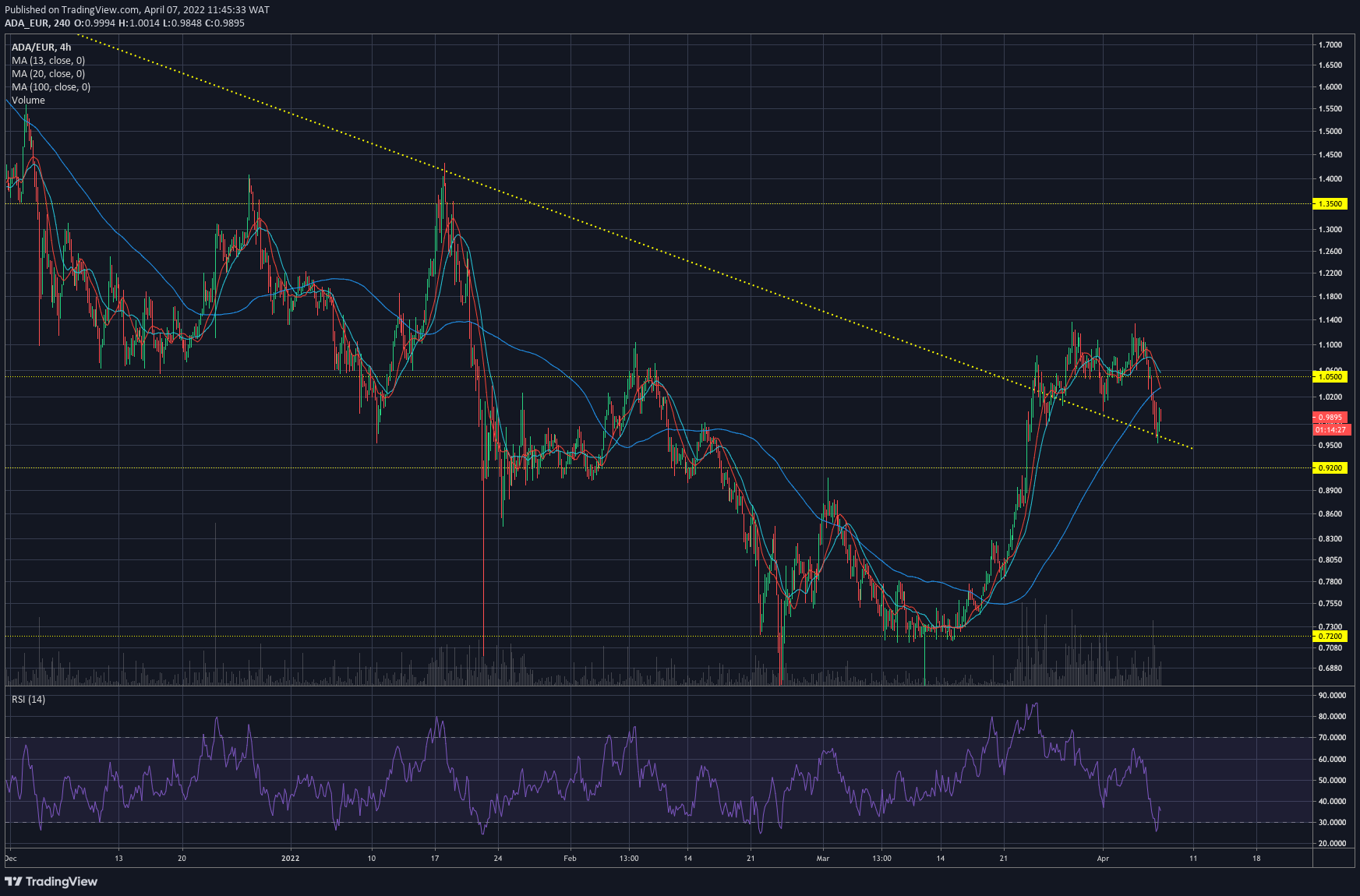 Cardano’s network reached a new milestone with over five million addresses functioning on the network with a year-to-date increase of 48%.

Have you been following the Bitcoin price developments or the smaller caps’ formations and want to act on the market moves on the go? Make sure you trade using our Bitpanda Pro iOS and Android apps. For a convenient trading experience from your computer, you can also rely on the traditional Bitpanda Pro crypto exchange.