The crypto market took quite a hit over the past week, with several factors giving investors cause for concern. Among other sources, the Consumer Price Index (CPI) reported extraordinarily high headline inflation, which is expected to have an effect on interest rates hikes and ultimately on all financial markets. In addition, energy, living expenses and costs have been rising as the war in Ukraine continues. The Coronavirus situation in China is also fuelling pessimistic investor sentiment.

The unhappy macroeconomic picture of the past few weeks has been affecting investors: especially when talking about the average crypto investor, this pessimistic sentiment is reflected by the Crypto Fear & Greed Index, which turned from “greed” to “extreme fear” within just two weeks. Times of fearful market sentiment are historically recognised as better buying opportunities rather than selling.

Bitcoin posted losses for around 10% over the last seven days and its price is currently at around €38,000. 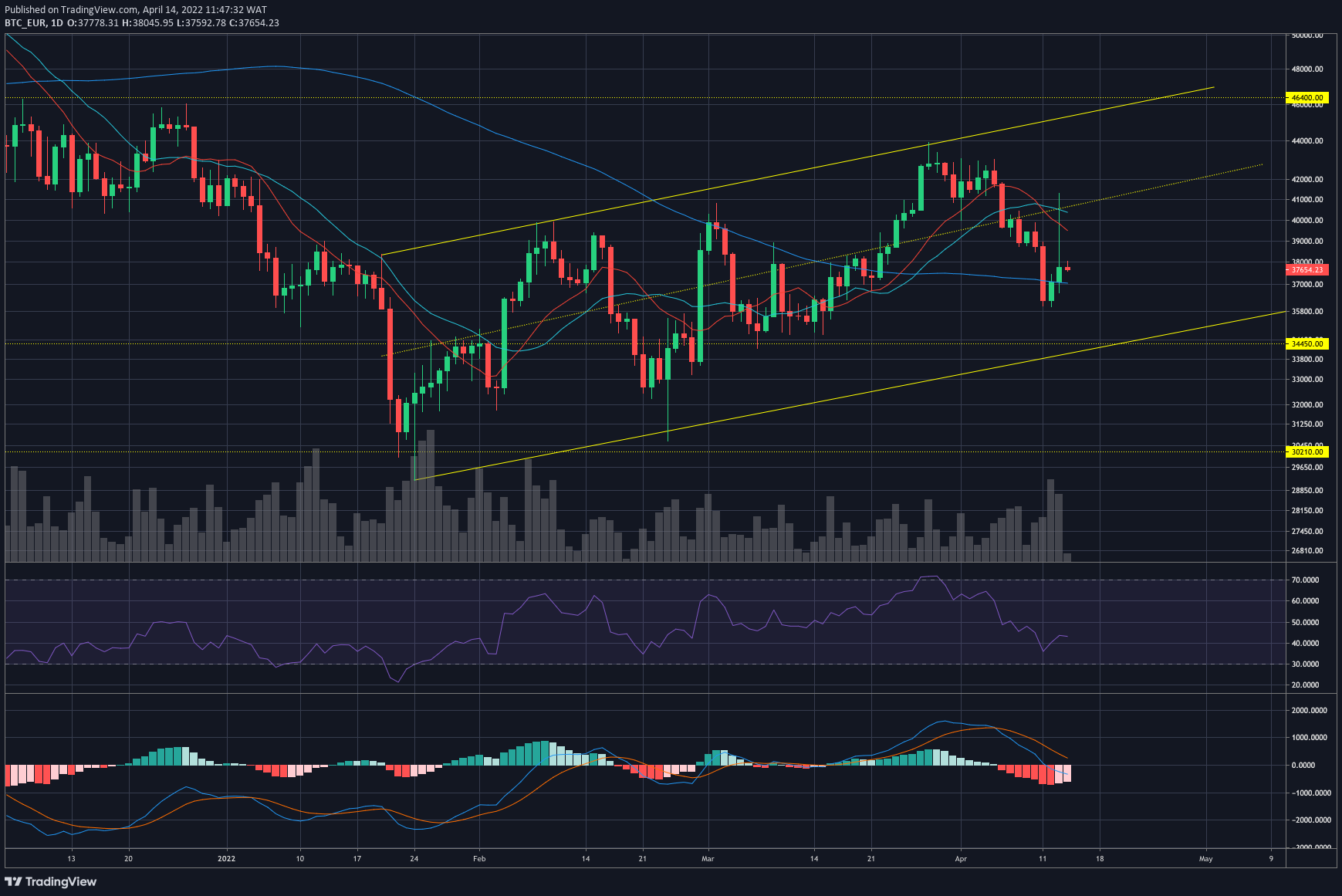 Another week of choppy price action for Bitcoin: last week, the price of the biggest crypto by market cap dropped and BTC closed with a bearish candle in its weekly chart. The price is moving inside of the trend channel and is now looking for higher-low support. Most m altcoins followed similar price movements.

The Ethereum Merge, a key part of the upcoming Ethereum 2.0 upgrade, has been delayed until the second half of 2022. The Ethereum Foundation hasn’t announced a set date yet but the upgrade seems to be in its final stages.

Ethereum is moving inside a descending channel on the lower time frame and is currently trading just under the upper resistance line of €2,900. The MACD momentum indicator is picking up, but remains in negative territory, while the RSI indicator is trying to turn the neutral 50 line to bullish. 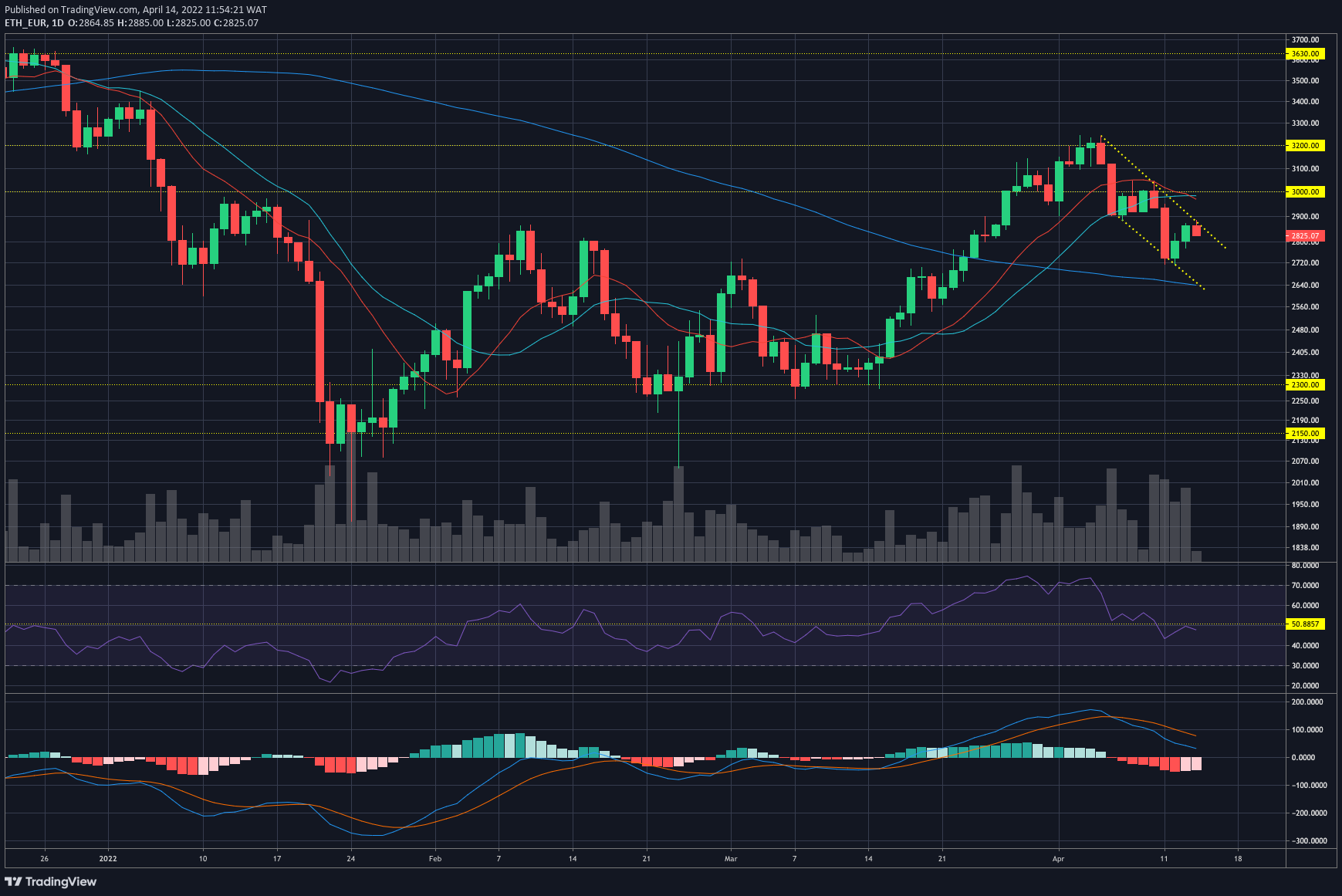 Close to 300B losses for the crypto market in two weeks

Other major altcoins are following Bitcoin price action and closed the week mostly in the red. The whole cryptocurrency market cap fell to €1.74T, down from the €2T it reached at the beginning of April. Bitcoin’s market dominance stands at 41% while Ethereum’s is at 19.5%. The ETH/BTC ratio hasn't changed much in April and is moving in a range between 0.0735 and 0.076.

Following comments from Tesla CEO, Elon Musk, DOGE has seen another spike and reached €0.165, its highest value since January 15. After acquiring a 9.2% stake in Twitter and thus becoming the largest single shareholder in the social media company, Musk has just offered to acquire all the shares of Twitter. DOGE trading was filled with volatility, with large candle wicks closings, but the price seems to be still holding bullish momentum above important SMA levels. 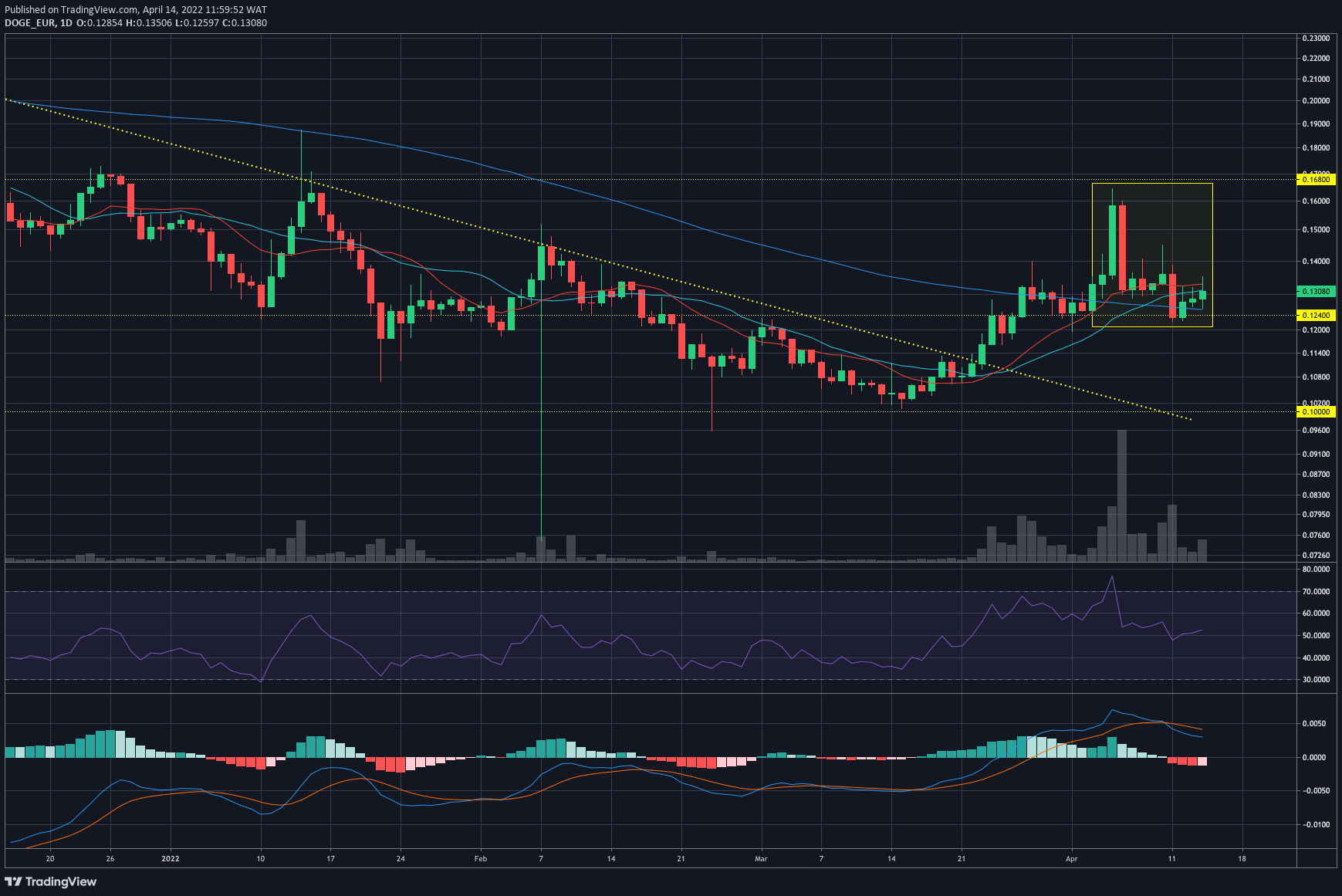 While there is no direct correlation between Elon Musk’s Twitter deal and Dogecoin, the recent growth of DOGE is linked to the fact that Musk has often strongly supported the adoption and development of the coin. In fact, Musk is one of the most famous celebrities who openly backs cryptocurrencies, with Tesla currently holding around €2B worth of crypto-assets.

A few altcoins are attempting to recover but the bulls are likely to encounter stiff resistance at higher levels. However, some managed to surge and posted double-digit gains. 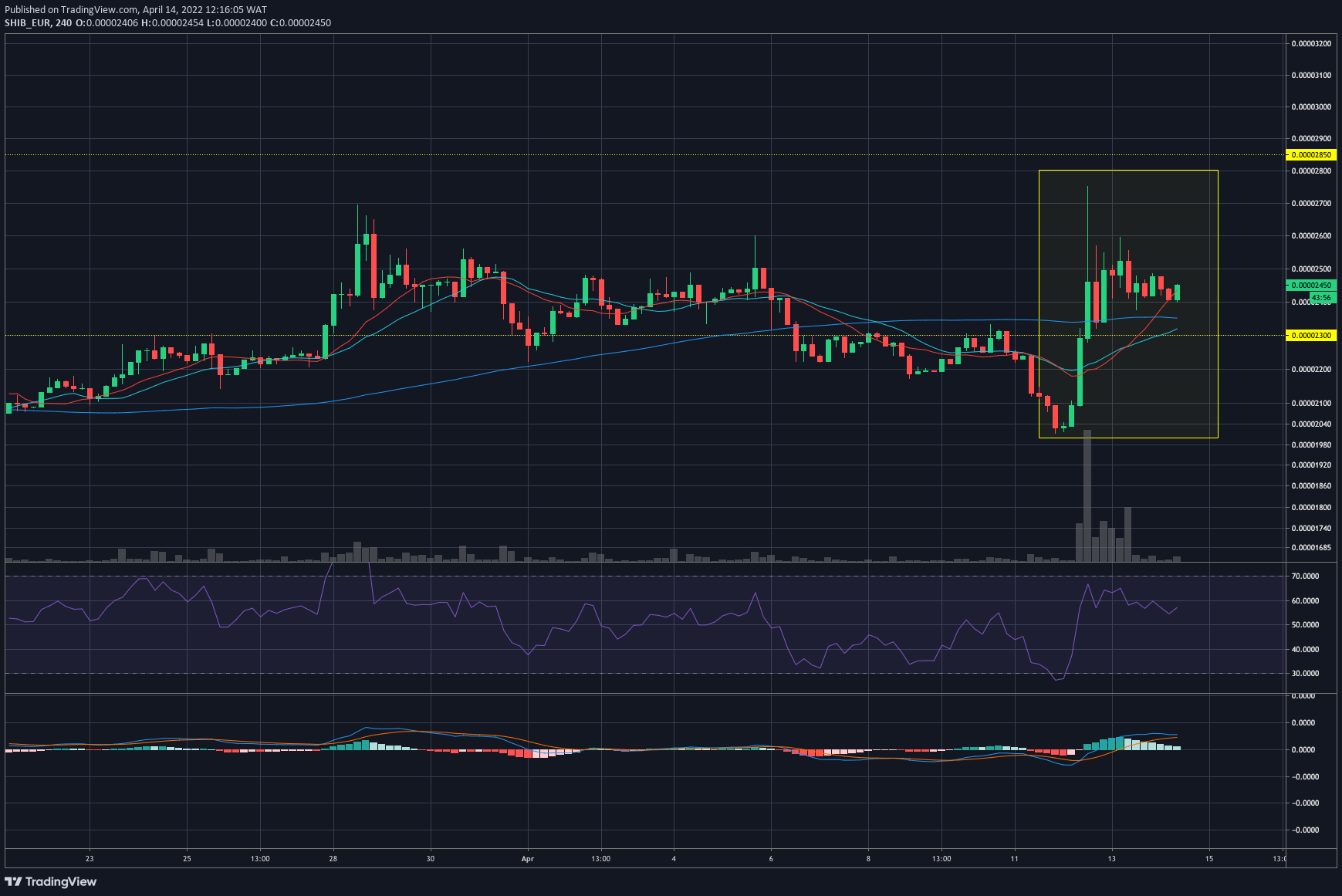 APE is moving very bullishly after the retest of the descending trendline. The RSI and MACD momentum indicators are rising and in bullish territory. The price rose by 20% in the last seven days and is trading just under the resistance level of €12.75. 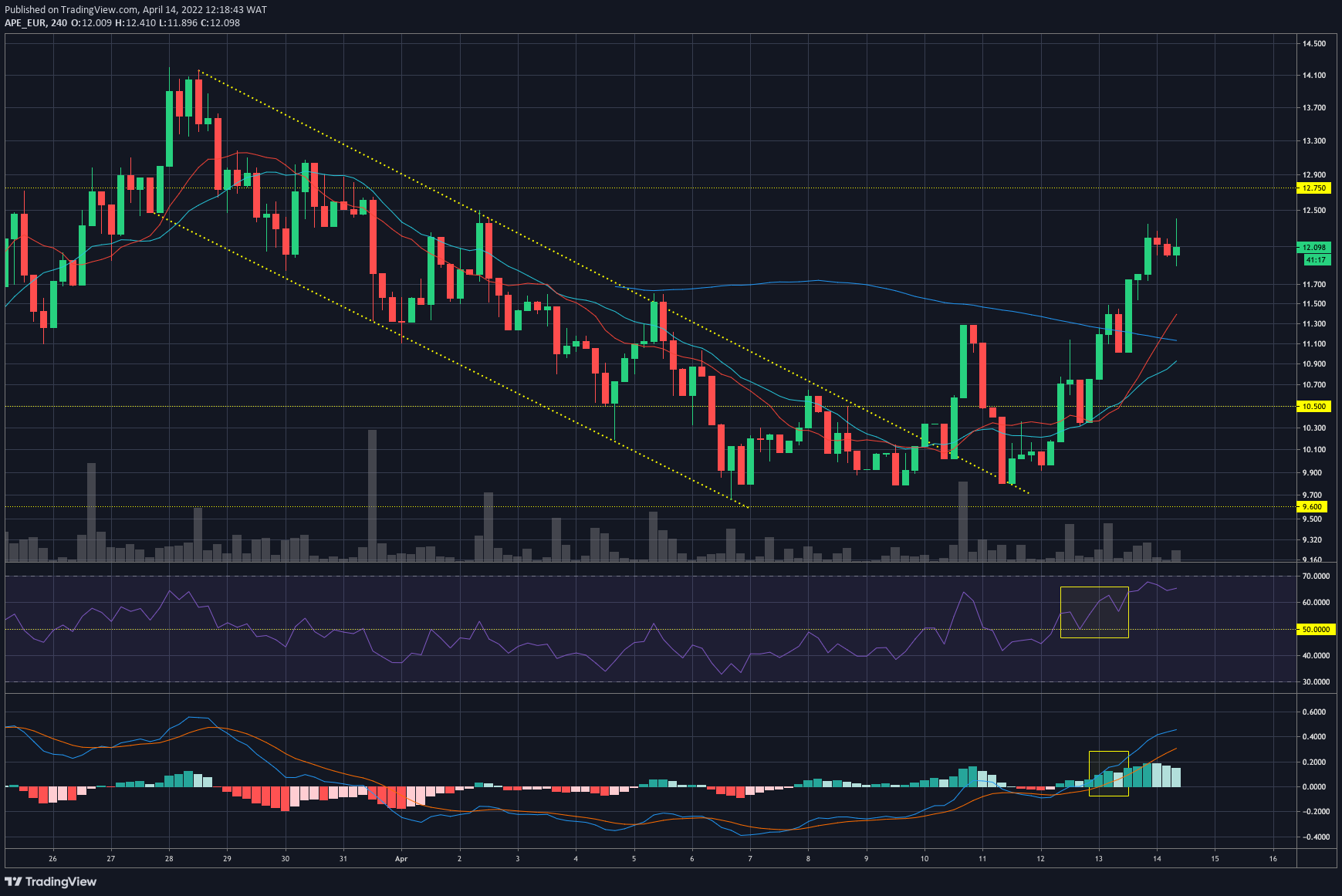 Have you been following the Bitcoin price developments or the smaller caps’ formations and want to act on the market moves on the go? Make sure you trade using our Bitpanda Pro iOS and Android apps. For a convenient trading experience from your computer, you can also rely on the traditional Bitpanda Pro crypto exchange.