The crypto market encounters some difficulties

Over the last seven days, the cryptocurrency market has gone through some turbulence, as prices for the largest coins by market cap continued to trade in range with large candle wicks, indicating nervousness among traders.

The Crypto Fear & Greed Index indicates that pessimism among investors is still onoing at 21. The bearish expectations of small investors took a toll on the crypto market sentiment last week. These tumultuous market dynamics ultimately resulted in the total crypto market cap losing around €15B. Crypto bulls showed strong hands at the beginning of the week when we saw the overall market bouncing back up, but the pressure on US equities continues to weigh it down. Since the correlation coefficient of Bitcoin and US equities is at all-time highs, bears might be maintaining their grip on the crypto market as long as stocks are selling off.

Unsurprisingly, Bitcoin kept leading the market. BTC managed to stay above trendline support on the daily chart and is now moving inside of a smaller falling wedge on a lower time frame.

Despite the somewhat neutral price action, technical indicators are showing several bullish signs. This is evident by the bullish divergences that have developed in the RSI and the MACD histograms. The RSI divergence is especially notable as similar readings have previously led to significant upward movements. 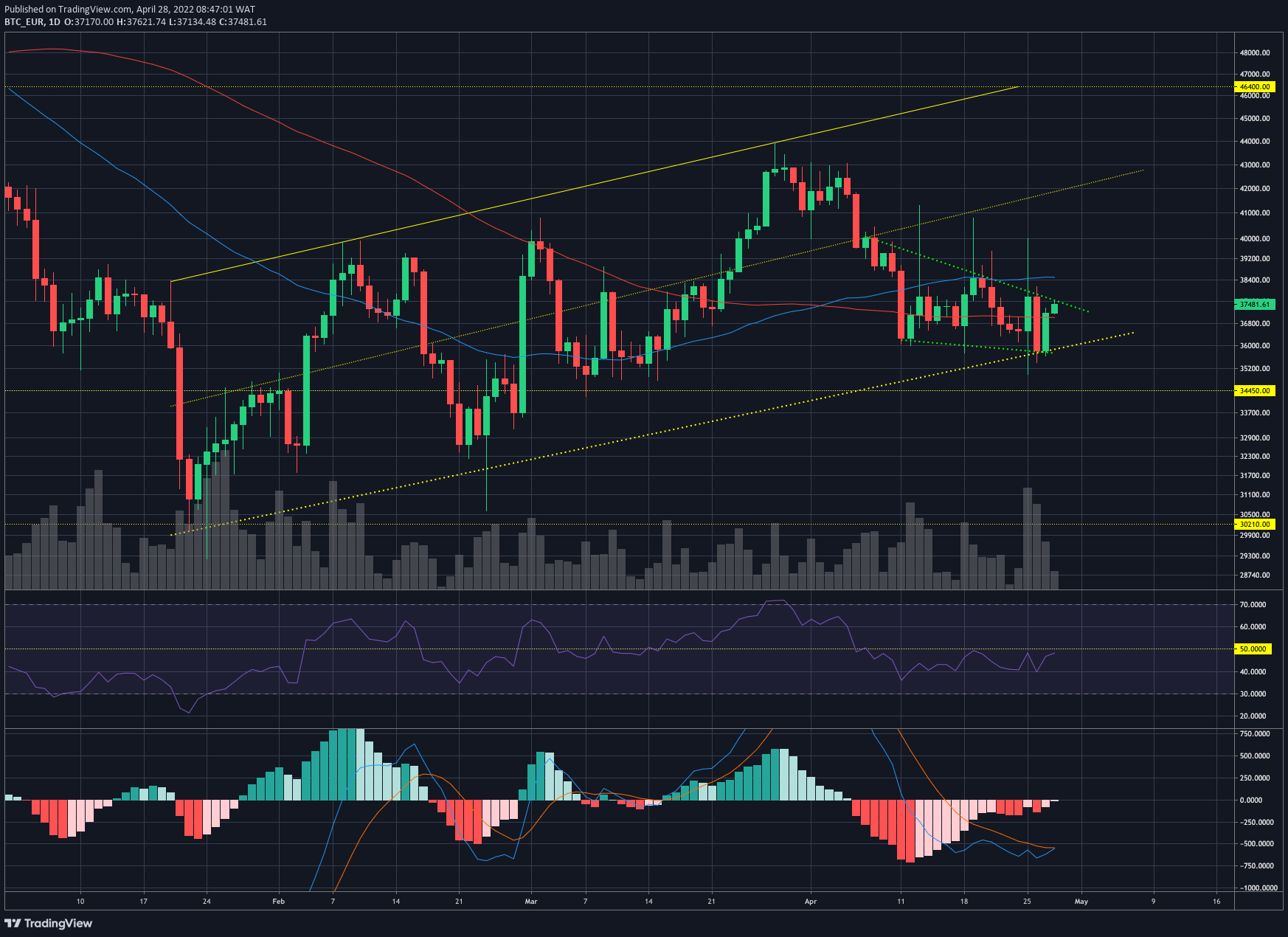 Bitcoin has been growing above an ascending support line since January 22. The line was validated several times and the subsequent bounces created several long lower candle wicks and bullish candlesticks. The exact direction of the trendline can’t be accurately determined due to the presence of those wicks but a break below it would indicate bearish development that could lead to lower prices, while a break out from it could lead to higher prices.

The weekly chart closed with new lows after a false breakout in the intraweek session, which means the breakout failed to continue over a certain level. However, BTC’s higher highs and higher lows from the last year and a half are still in place, meaning the latest price action could be the sign of an overall long-term retracement, rather than of a bear market. As Bitcoin keeps trading inside of this larger ascending chart pattern with no follow-through to either side, its overall price action can be considered more neutral than bearish. 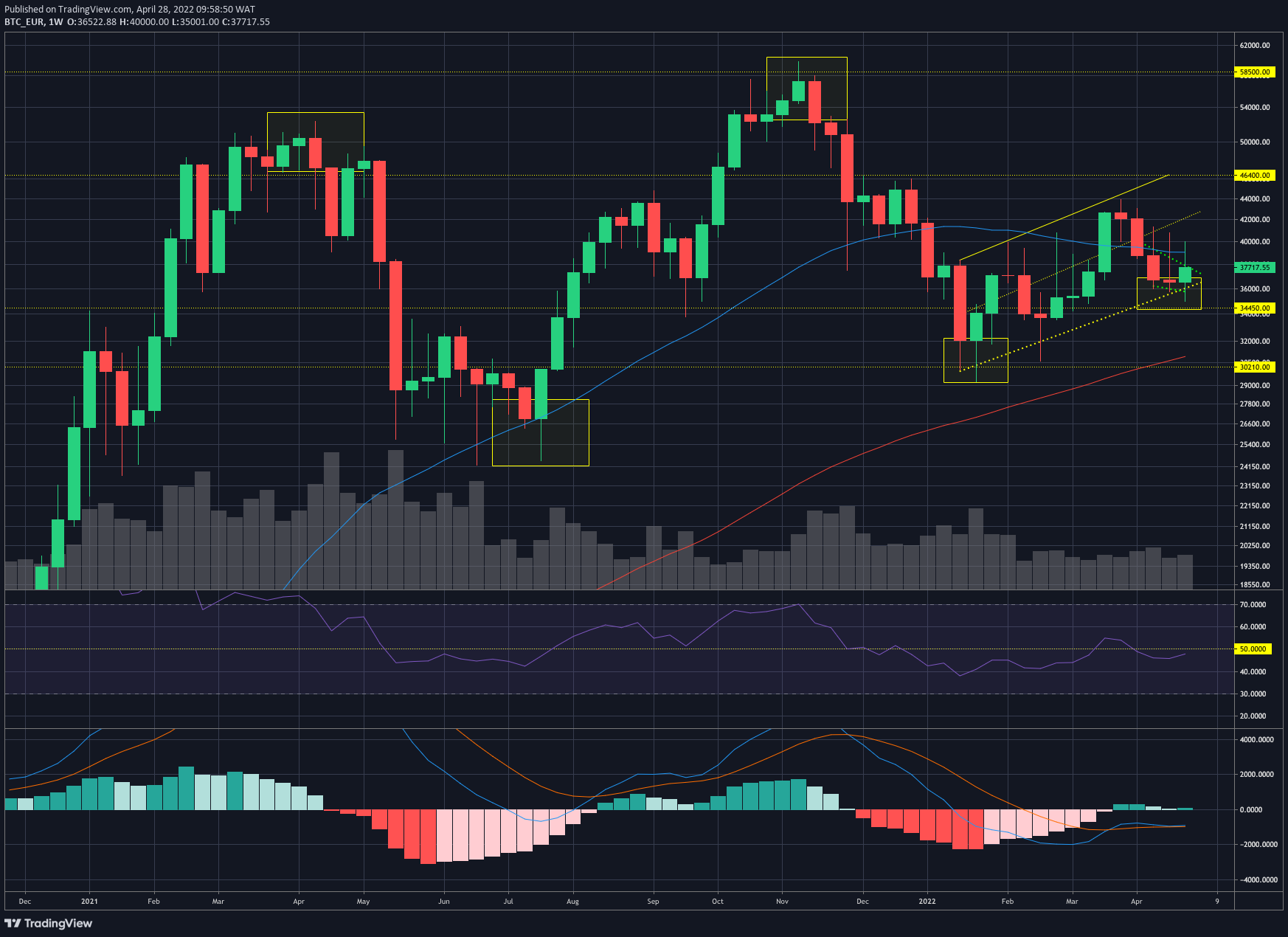 As shown by the changes in price seen this week in many altcoins’ charts, (with relatively minimal losses or gains) the crypto market keeps following Bitcoin. Major altcoins closed the week slightly in the red, while some small-cap coins outperformed the market - similarly to what happened last week.

Ethereum has been trading in a wedge pattern moving between the key levels set earlier this month. Momentum indicators are giving mixed signals as the trend in a higher time frame is not clear yet. The MACD dropped to negative zones, while the RSI is still under 50, indicating bears are in control. 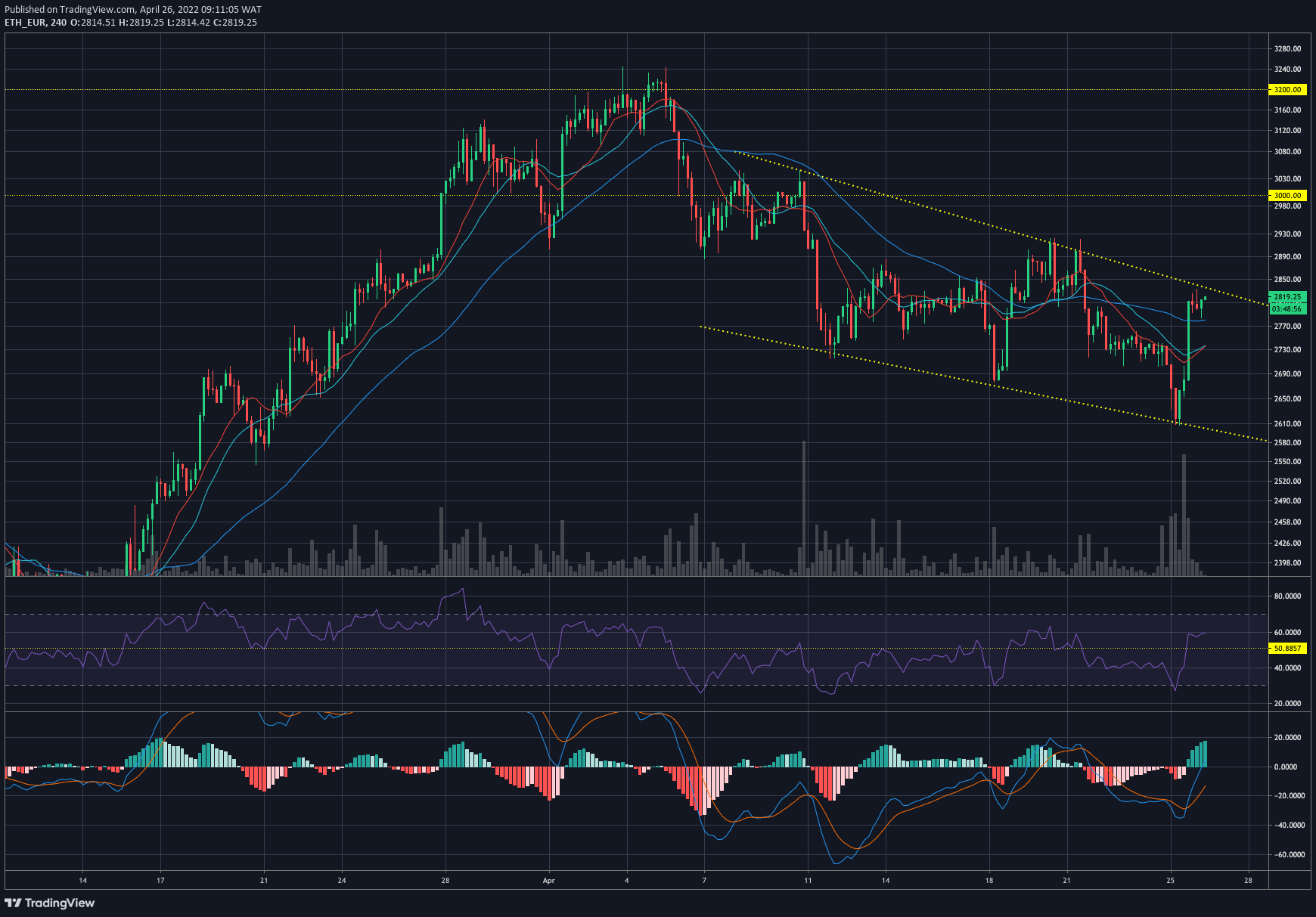 The consolidation likely to take place now could lead to a significant breakout. ETH’s price may continue to range but the next breakout will determine the next of the trend.

DOGE surged by around 40% after news of Twitter accepting Elon Musk’s buyout deal got public. According to the press release, the deal is valued at around €41B. Dogecoin traded at around €0.16, up 60% since its March low. However, after the initial price increase, bears pushed the price back to €0.13. 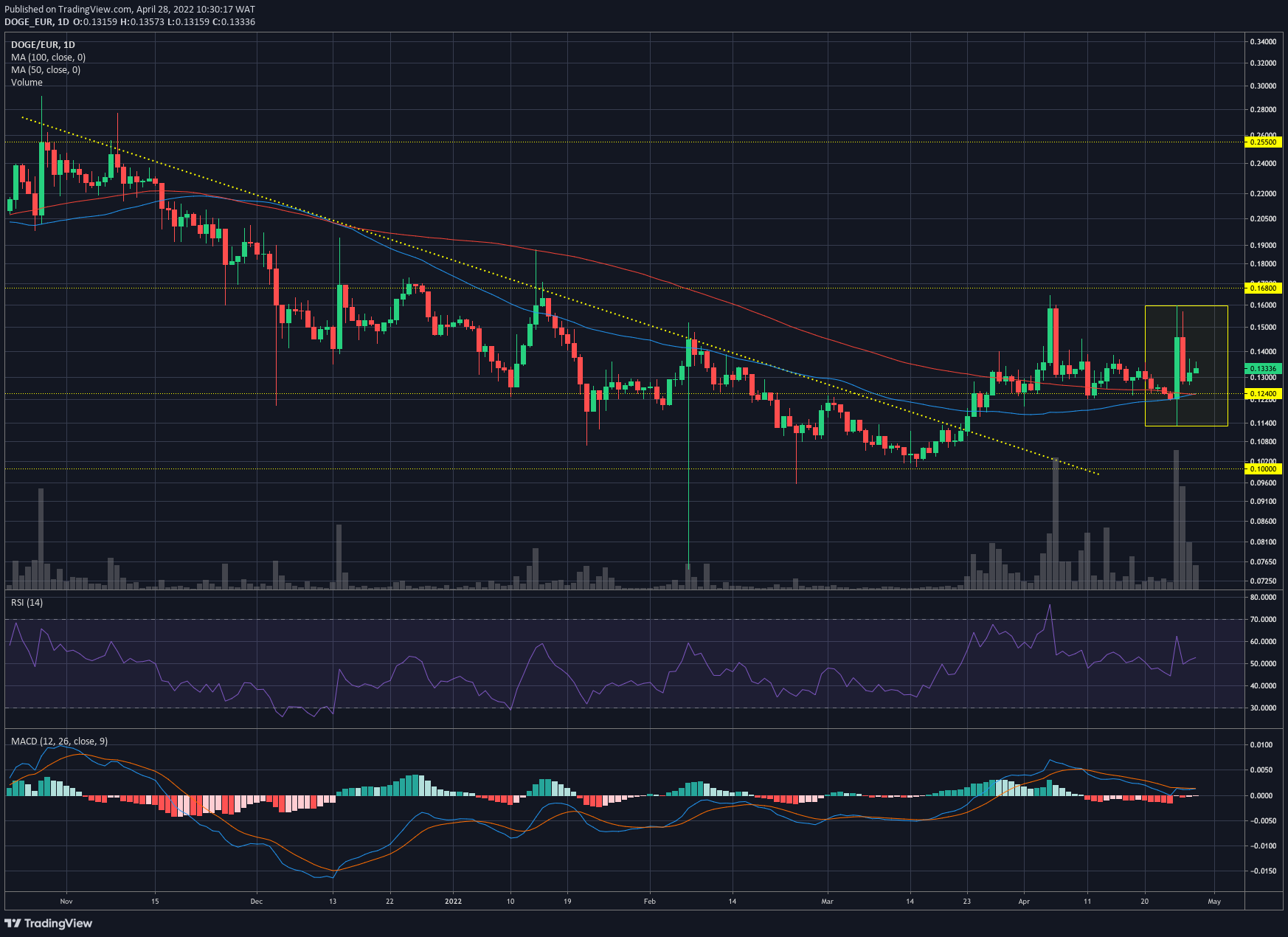 Though there is no direct link between Dogecoin and Twitter, some speculate that Musk, Tesla’s CEO, might decide to use his influence to add DOGE as a payment method on the social media platform. These rumours are based on the fact that Tesla accepts payments in DOGE for its merchandise.

Though bears maintained their grip on the broader crypto market, some altcoins outperformed others. ZRX, the native token of DEX protocol (0x), is up some 25% since April 25 after 0x Labs raised €65 million in a Series B funding round. 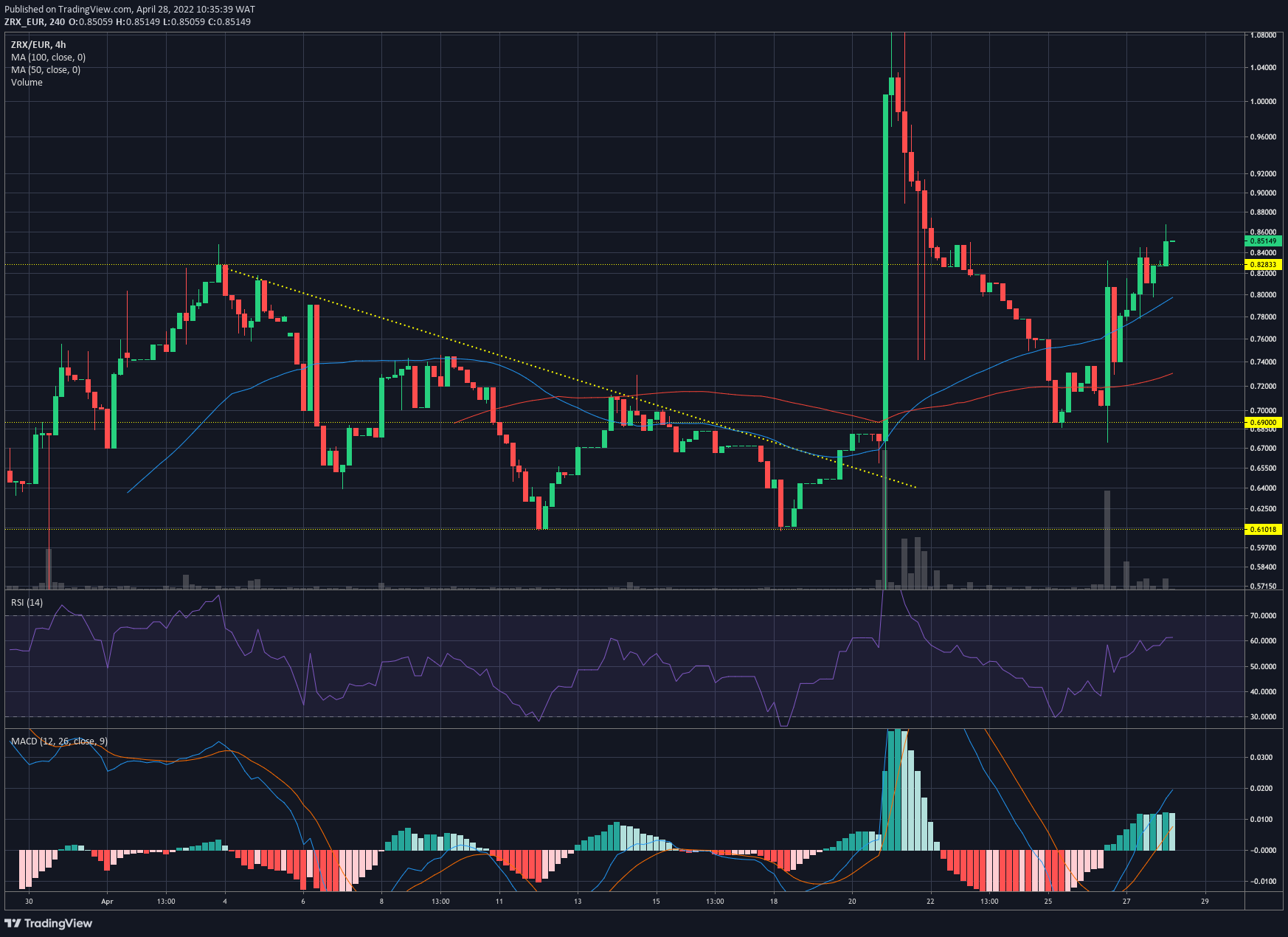 The 0x ecosystem has been rapidly expanding and it now supports seven major blockchains: Ethereum, Polygon, Fantom, Avalanche, Optimism, BNB Chain and Celo. At the time of writing, 0x has enabled over €150B in tokenised value across 43M+ trades, with 3.5M+ users across all wallets and app integrations.

ApeCoin continues to move bullishly and is up some 50% in the last 7 days as Yuga Labs prepares to release its new metaverse, Otherside, very soon. 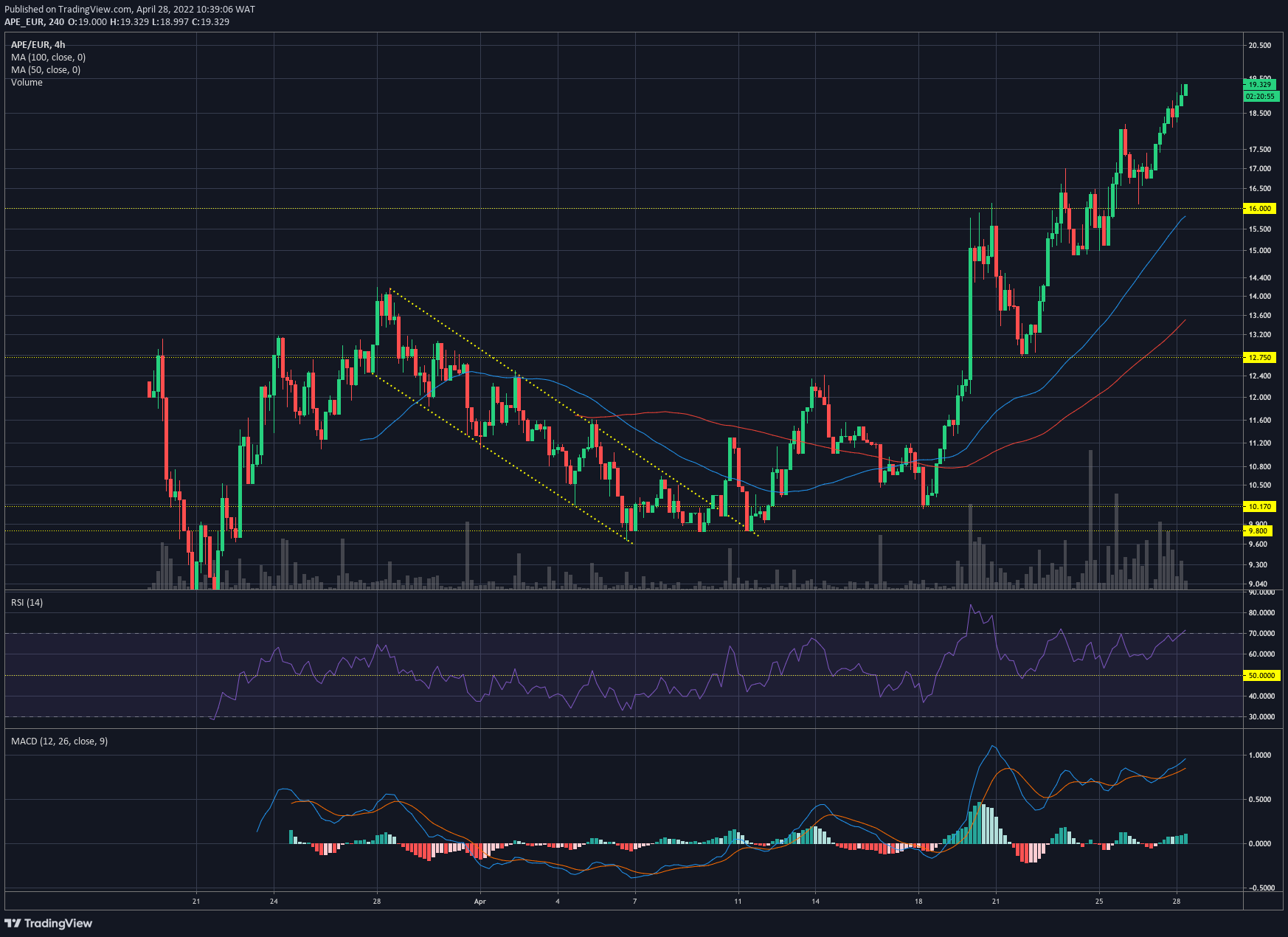 APE’s performance has been exceptional this month and the altcoin has almost doubled in price in less than 3 weeks.

KNC, the native token of Kyber Network, also outperformed the average crypto market this week. In the past seven days, the token grew approximately by 30% and almost by 350% since the beginning of the year. 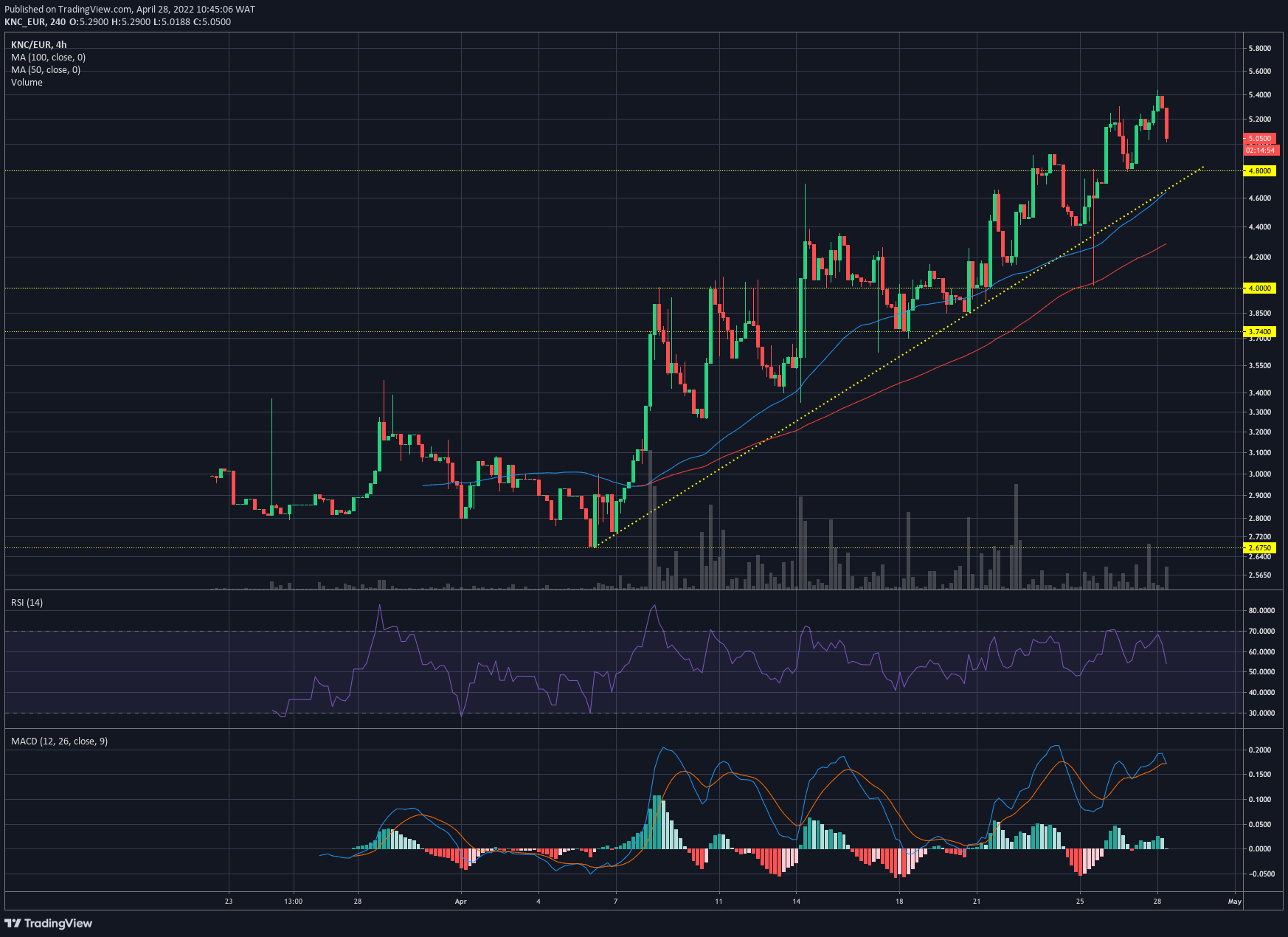 Kyber Network is a multi-chain crypto trading and liquidity hub that wants to enable trades at the best rates.