The wider crypto market took an early nosedive on Sunday morning and the crypto futures market experienced its highest number of liquidations in history. The sudden Bitcoin price drop might be due to over €8 billion overleveraged traders liquidating their assets.

-Reasons behind the great dip this weekend

-BTC and ETH leading the market

The wider crypto market took an early nose dive on Sunday morning and the crypto futures market experienced its highest number of liquidations in history. The sudden Bitcoin price drop might be due to over €8 billion overleveraged traders liquidating their assets, topping the previous market record of almost €5 billion registered liquidations on the 23th of February, 2021. The forced closure of long positions and bullish trades accounted for over 90% of the total liquidations, indicating that leverage was excessive and bullish amongst traders.

Speculations as to what could have caused the sudden dip

Various reasons could have caused the sudden dip, two of which are worth highlighting. First, rumours say that the U.S. Treasury is investigating several corporations who they suspect are involved in money laundering using cryptocurrency. The second reason might be connected to the BTC mining blackout in China. Some of the country’s largest Bitcoin mining zones experienced a huge blackout. Consequently, the hash rate (mining speed) plummeted, causing a panic on the market while Asian markets were open. This might have led to BTC’s price dropping by more than 15%, its biggest intraday drop since February. 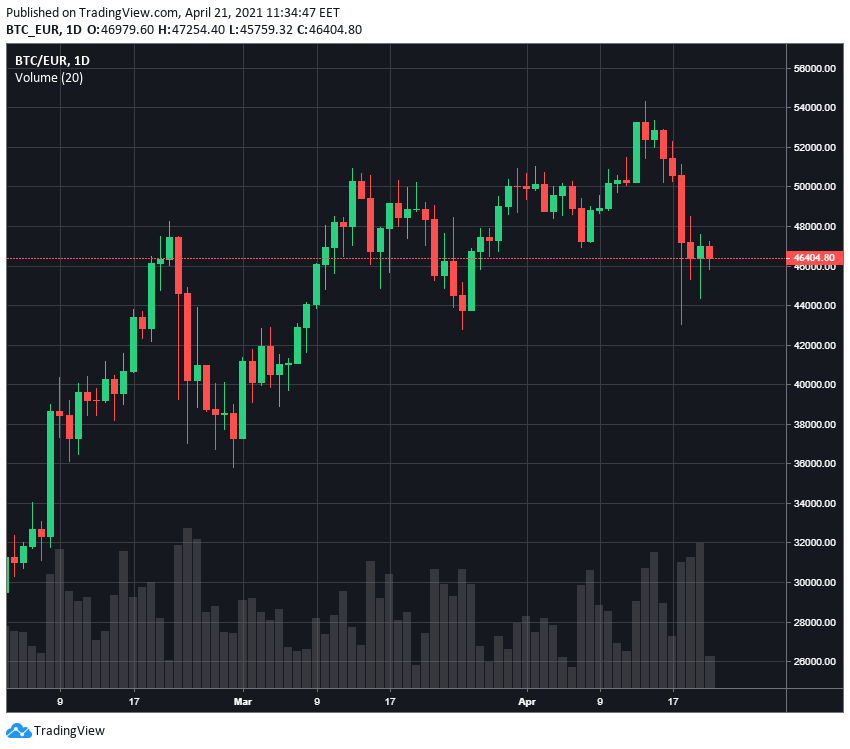 Did BTC drag the market down?

The weekend market usually has lower liquidity, meaning that it either moves slowly, or that it moves very fast and is volatile. The latter is mostly due to retail traders being the main movers. BTC likely dragged the whole market down, with most altcoins losing even more value.

The second biggest cryptocurrency, Ethereum, also experienced a significant price correction. A similar drop happened in February, when ETH quickly rebounded, and reached a new all-time-high. Losing bullish momentum is usually only short-term in a bull market, especially if the triggering events do not influence the fundamentals. 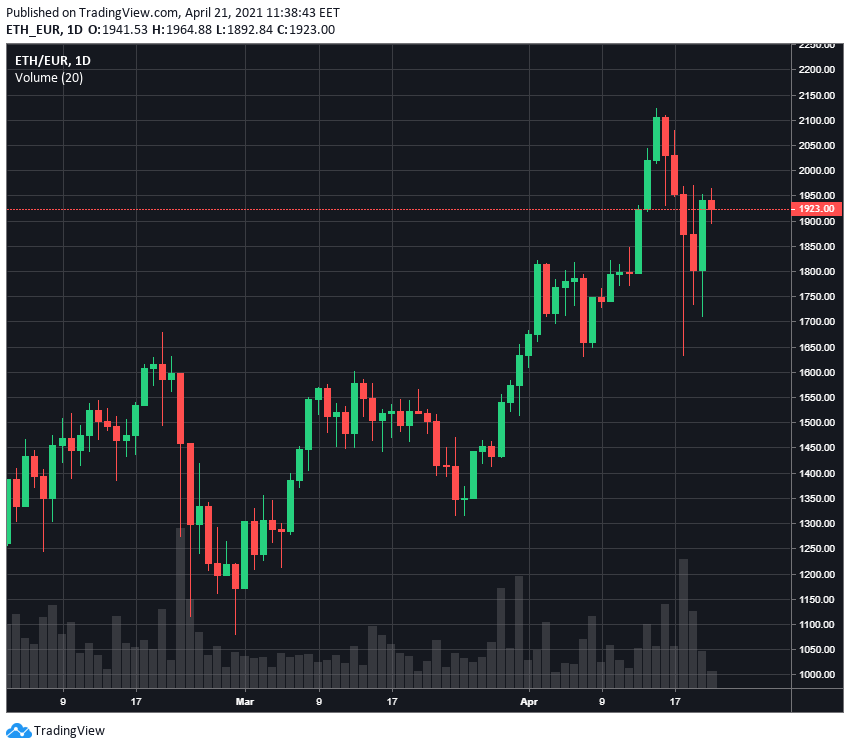 DOGE again was the star of the week

Aside from the wild ride of crypto prices, the star of the week was Dogecoin (DOGE). Even before the 20th of April, which is titled by some as “Doge Day”, the meme cryptocurrency was up by more than 300% in the past week and had briefly replaced XRP as the 4th largest cryptocurrency in terms of market capitalisation. Dogecoin has seen an impressive 2021 so far, thanks to support from followers and influencers like Elon Musk, who have driven a social media frenzy over the coin. 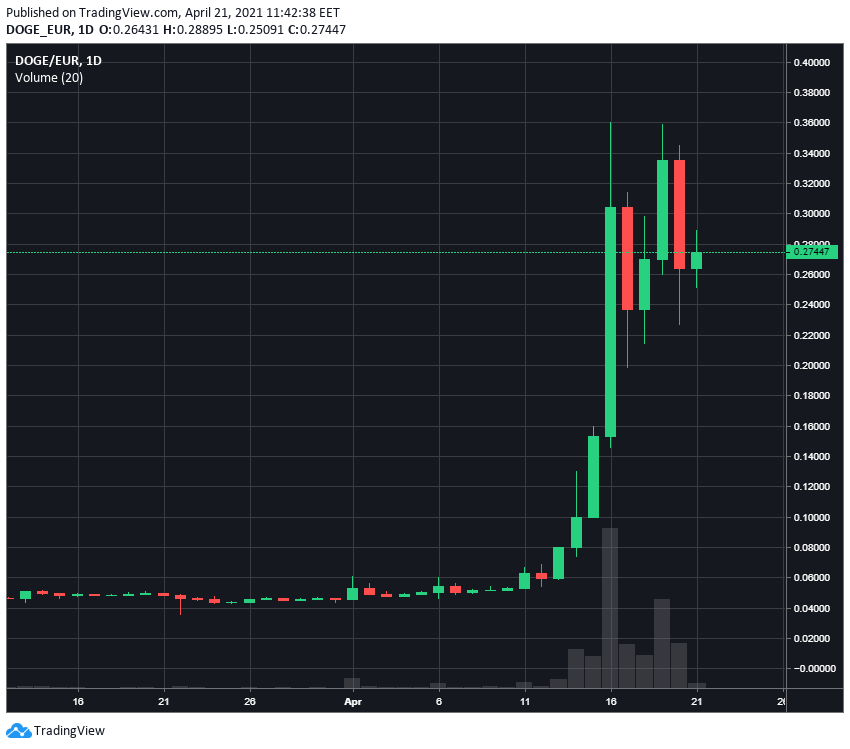 Doge has been trading in a wide range from €0.24 to €0.30, peaking briefly at €0.35. High volatility is causing huge candle spikes on charts, which indicate there is a lot of noise and emotion behind the trading.

The week was full of positive news regarding crypto adoption and new financial instruments. Time Magazine will accept cryptocurrencies for digital subscriptions. Global access to this subscription is expected to be rolled out during the next months and will allow all major cryptocurrencies to be accepted, like BTC, ETH, DOGE, XRP and LTC, as well as DeFi tokens, such as Uniswap, Aave, Balancer, and Compound.

Capital markets will get a new investment vehicle, as asset manager VanEck has launched a new exchange-traded fund (ETF) on Nasdaq that aims to track companies working in the digital asset space or those that have exposure to the nascent asset class. The fund, however, will not invest in cryptocurrencies directly, nor indirectly through derivatives, but will seek to track the performance of the MVIS Global Digital Assets Equity Index. The index would include companies that generate or have the potential to generate at least 50% of their revenues from projects centred around digital assets, or have at least 50% of their assets invested directly in digital asset holdings.

Another big name, Canadian-based Purpose Investments’ (BTCC) ETF has already surpassed $1 billion in assets, only two months after launching. There are now 9 different companies in the U.S. who have handed in applications to the SEC for a U.S.-based Bitcoin ETF. The growing assets might be a sign of institutional inflows as they seem to seek crypto exposure.

To conclude, after six consecutive bullish months, the crypto market is trading sideways on the weekly chart, which is completely normal March’s great run. Keep in mind that Bitcoin closed with its biggest monthly bullish candle in history, which pushed the price up by €13,000 to finish just above €50,000.