The crypto market continued to struggle in the first week of May. Major altcoins are far from the peaks they formed in 2021 and are now grappling to find the bottom.

In recent months, the rate hikes by the Fed, the US Federal Reserve System, seem to have been increasingly affecting the cryptocurrency market. The Fed’s meeting scheduled for this Wednesday played a major role in overall volatility with many investors expecting even more aggressive rate hikes than before. The Fed raised the interest rates by 0.50%: though it is the largest hike of this kind in the past two decades, it was still in line with investors’ expectations. The increase creates a target range of between 0.75% and 1% following a 25-basis point increase in March. Just a few hours after the Fed announcement, BTC started approaching €38,000.

Bitcoin may be on the verge of a breakout

Bitcoin is building a falling wedge formation inside of an ascending channel and the price is forming a base on the resistance zone. However, the eventuality of a bearish move has not disappeared just yet. Momentum indicators are posting mixed signals, with the RSI reporting neutral values at 50 and the MACD still hovering in negative territory. 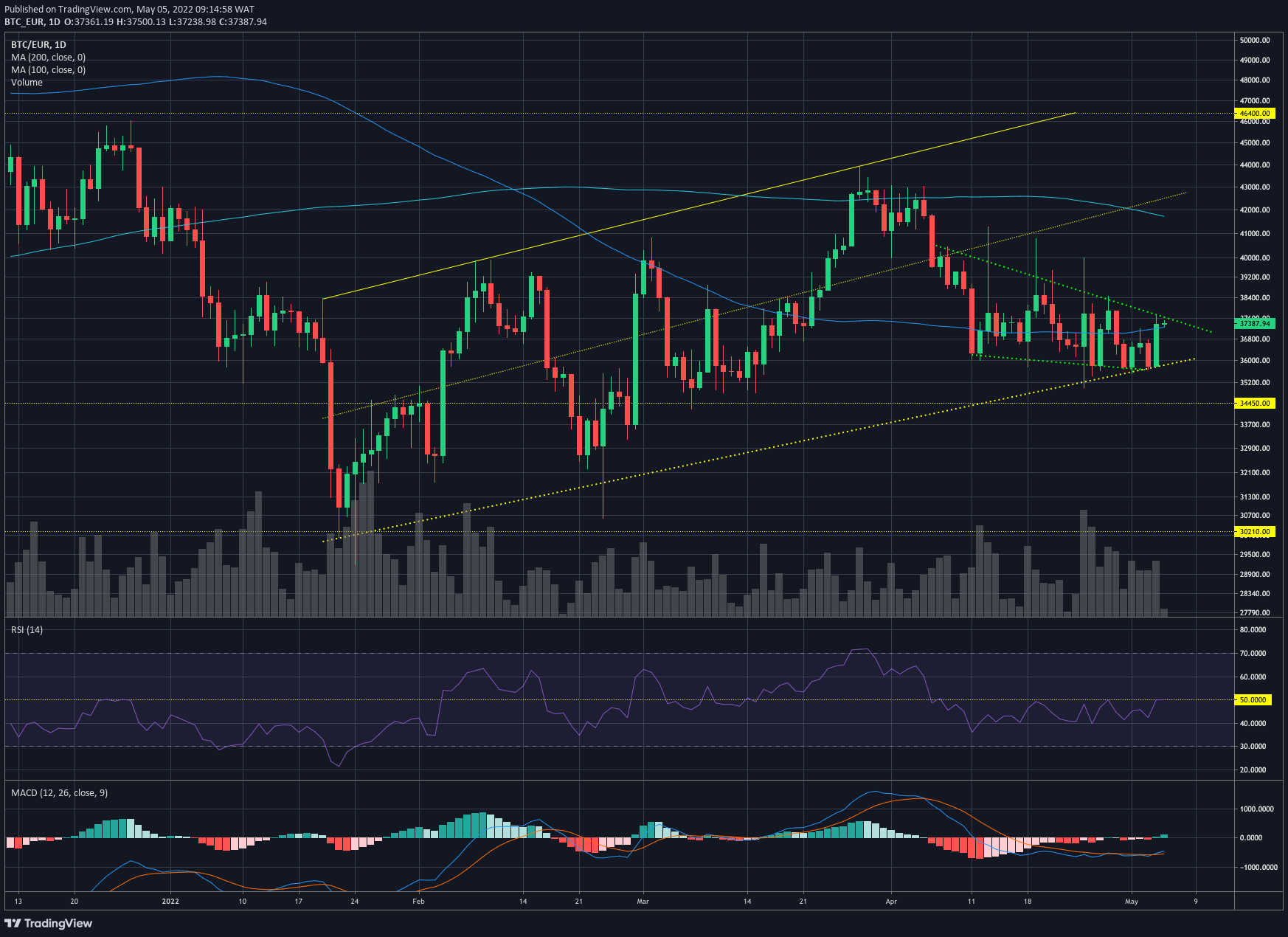 Large candle wicks are marking dynamic levels of resistance. Bitcoin is forming its local low in the ascending channel but only a breakout will confirm bullish price action. Altcoins can likely be anticipated to follow Bitcoin’s moves.

According to the Crypto Fear & Greed Index, the crypto market sentiment among investors remains pessimistic. This week, the index indicated a fearful and at times extremely fearful market sentiment, hovering around 20/100 and 25/100.

An overly pessimistic approach to the markets typically leads to sell-offs right into the bottom-price regions. Historically, searching for buying opportunities during times of pessimistic market sentiment has often led to positive returns.

Ethereum is following almost the same price movements as Bitcon and is moving inside of a falling wedge formation. The price bounced from the lower support line and is now trying to follow Bitcoin in a possible breakout, which could push the price higher over the €3,000 barrier. However, if a failed bullish confirmation were to happen, it could push ETH’s price towards the retest at the €2,300 support zone. 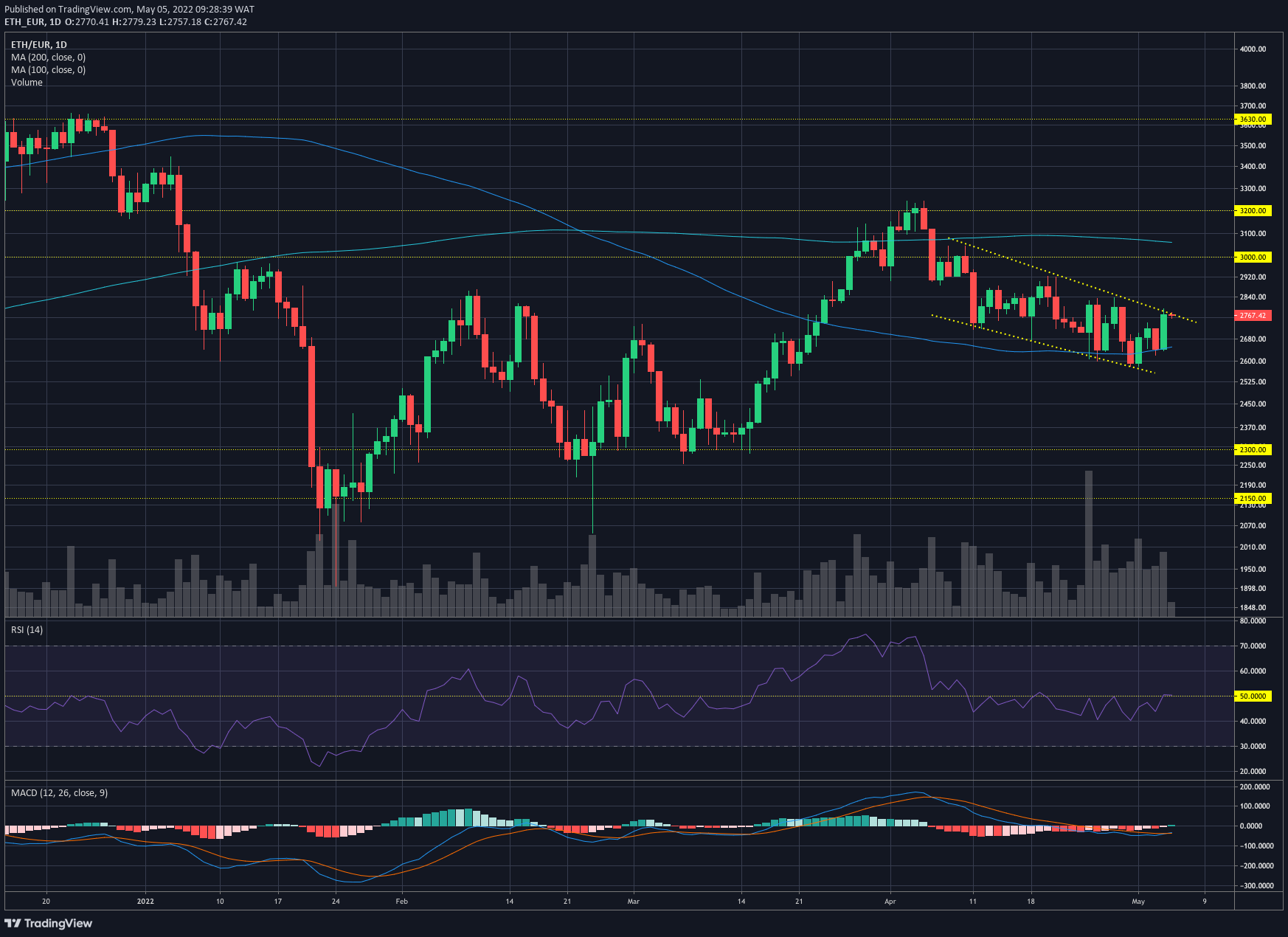 Solana fell to the €80-level, marking its lowest level since March 15 and considerably down from the €124 it reached around a month ago. On Sunday, the Solana network was down for seven hours after an increased number of transactions by the Candy Machine NFT bots caused significant congestion. 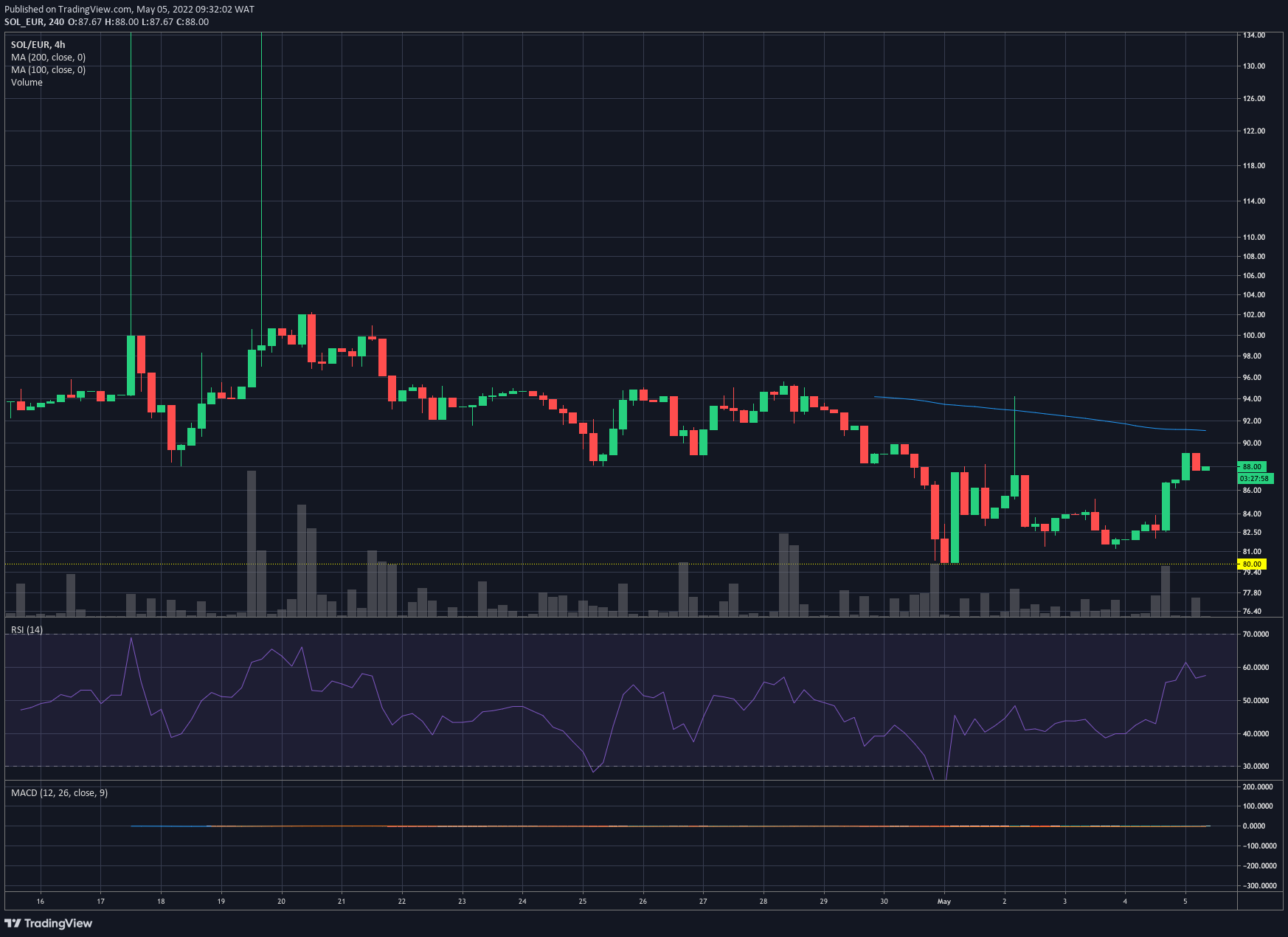 According to Solana’s report about the outage, the network had been flooded with six million transactions per second by bots, causing validators to run out of memory and the network to crash, although there was no proof of a denial-of-service (DDoS) attack.

SOL, the sixth-biggest coin for market cap, is now struggling, as is ADA, which has even dropped from the third place last year to eighth place now. After seeing a high at €2.60, Cardano is now trading around the €0.80 mark. The price has been dropping since September 21 and moving under a descending trendline. 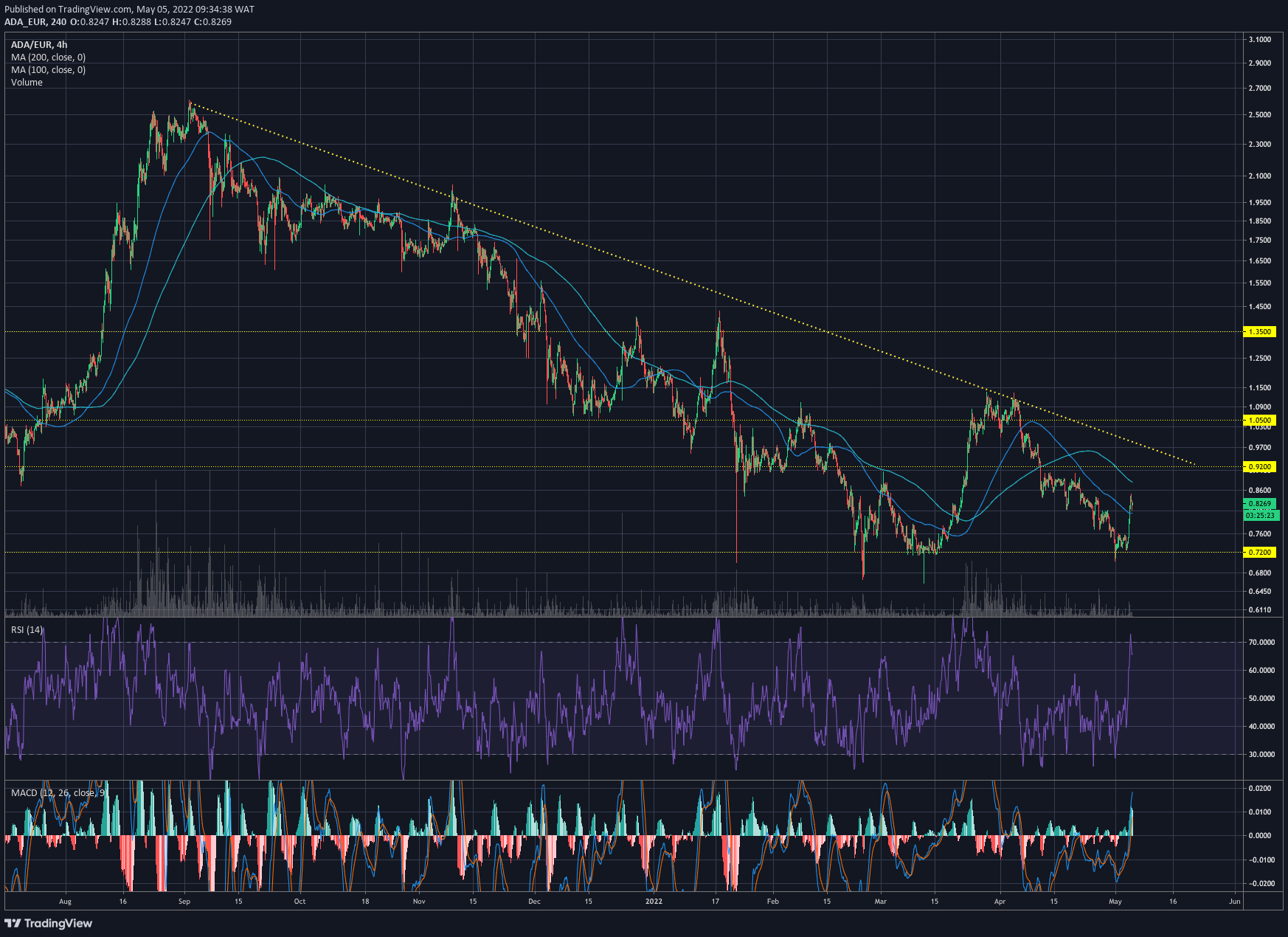 Another coin that saw major losses is IOTA, whose price dropped below €0.50 and has broken down from an horizontal support area, which had previously been in place for more than a year. On the daily chart the price is decreasing alongside a descending support line, with TA indicators still flashing bearish momentum. 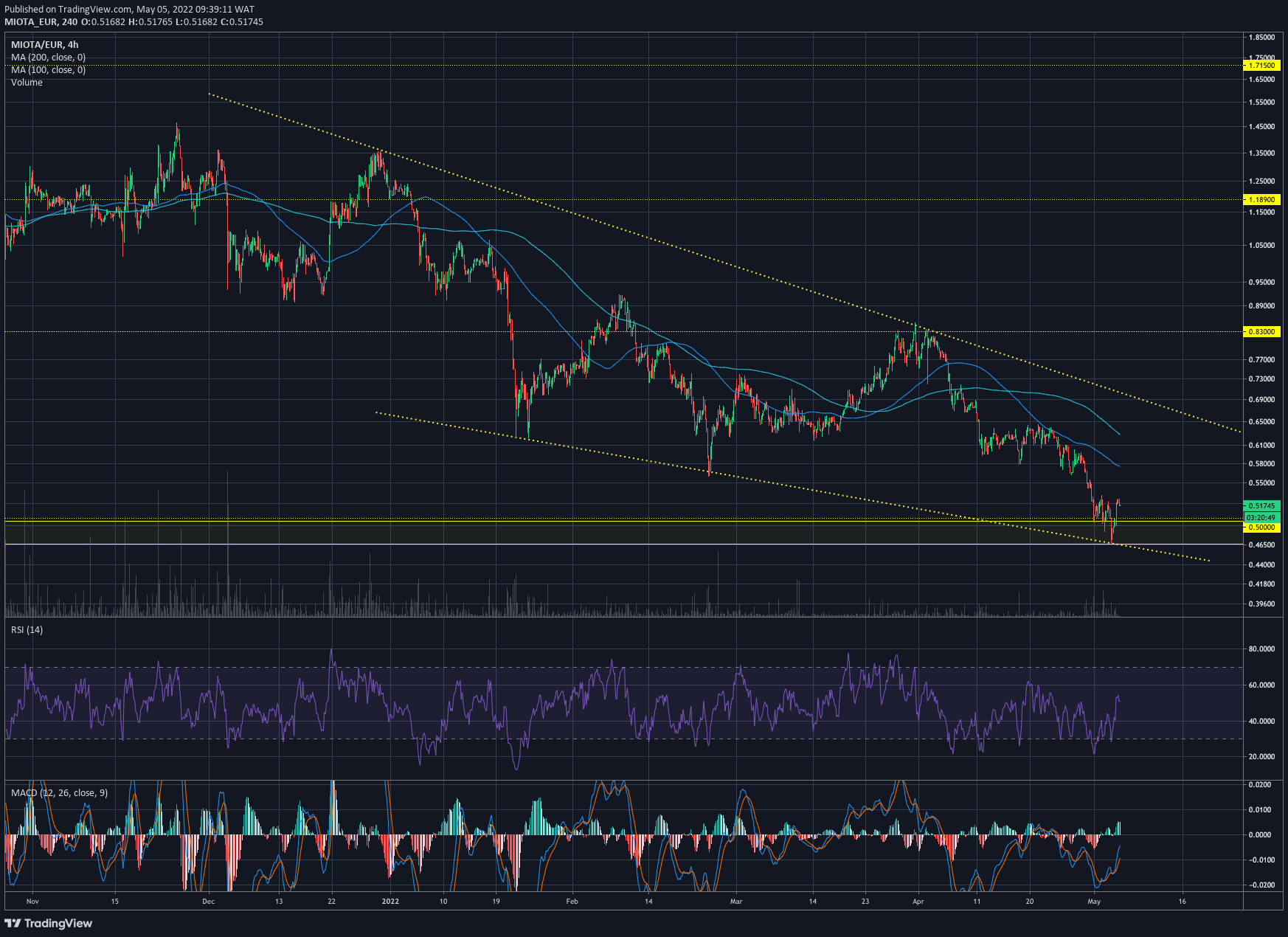 The daily chart shows IOTA price has been decreasing alongside a descending support line since the beginning of the year. While the line has been validated three times, its slope is not certain due to the presence of many long lower wicks. Only a breakout from the upper descending line could lead to a reversal of the bearish trend.