One of the most severe weeks in the history of crypto

This week will probably make history as one of the worst weeks in crypto. The crypto market plunged together with the global financial markets in a massive sell-off that resulted in double-digit drops for every major coin in the market. Bitcoin fell by almost 23% in the last seven days, while some of the top 10 major altcoins saw losses of over 50%. Between inflation and the geopolitical tensions, the macroeconomic picture could hardly be worse for risk assets. The Crypto Fear & Greed Index is a crypto market sentiment indicator, which showed at 10/100 that there is extreme fear on the market, a level previously seen in January.

The crash of the Terra ecosystem added to the already severe situation when its token LUNA and stablecoin TerraUSD (UST) plummeted. TerraUSD, the world’s third-largest stablecoin, collapsed as it decoupled from the U.S. dollar, plunging below $0.30, while LUNA fell by over 95%.

Sixth weekly bearish close for Bitcoin in a row

Bitcoin has closed with six red candles in a row, marking six weeks of bearish closing. It’s the first time in eight years that a bearish trend like this has been recorded for Bitcoin. The bearish mood translated on longer timeframes as global events continue to put pressure on the markets. Bitcoin closed with a doji candle and a large down wick on the daily chart, marking a possible reversal area. BTC found support above €27,450 and appears to have started an upside correction. 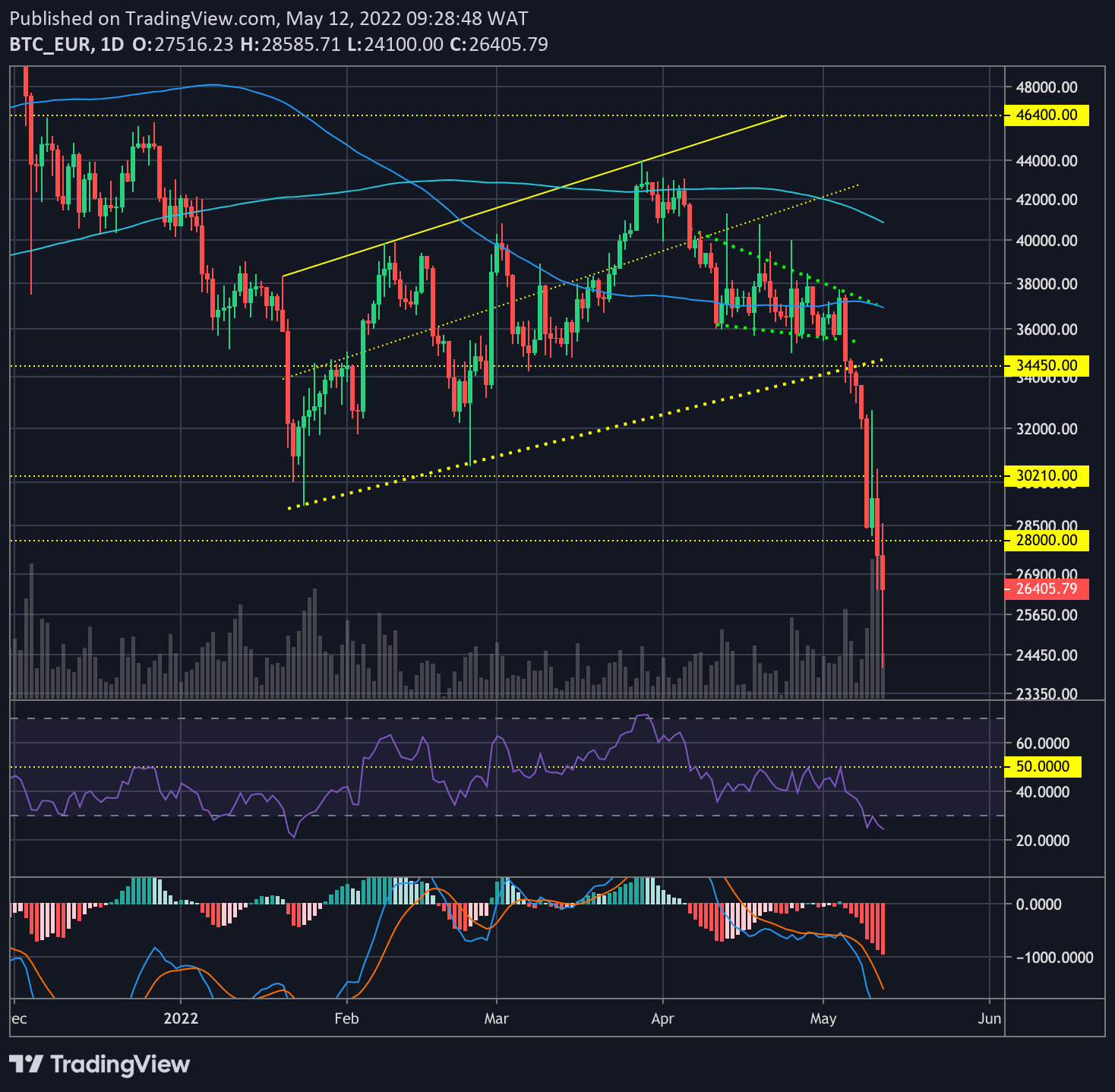 The capitulation phase is typically the phase that follows after the market has found a bottom. It usually involves a surge in selling pressure and price downturns.

The total value of all cryptocurrencies has dropped some 60% since November 2021. At that time, the total crypto market cap reached €2.7 trillion while now it is at €1.5 trillion. All things considered, the cryptocurrency market is reaching the opposite end of an “euphoric” phase, where there seems to be a panic climax, which could lead to a reversal soon after.

Altcoins down alongside Bitcoin

The market crash took down every major altcoin alongside Bitcoin and altcoins posted even larger losses than BTC overall. Ethereum broke below the descending wedge pattern which had been in play since the beginning of April and is now trying to form a new local bottom near the levels of the beginning of the year. 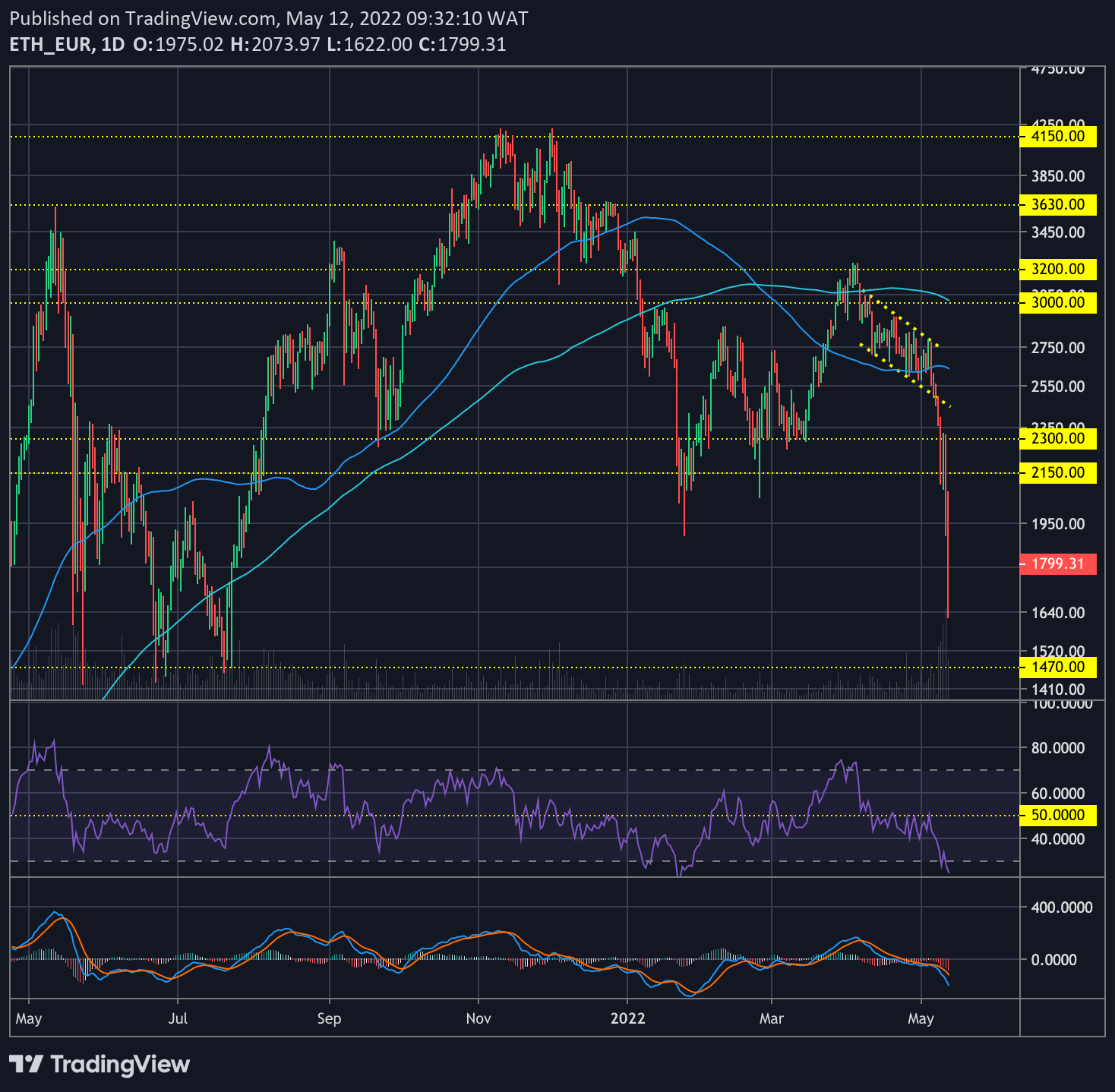 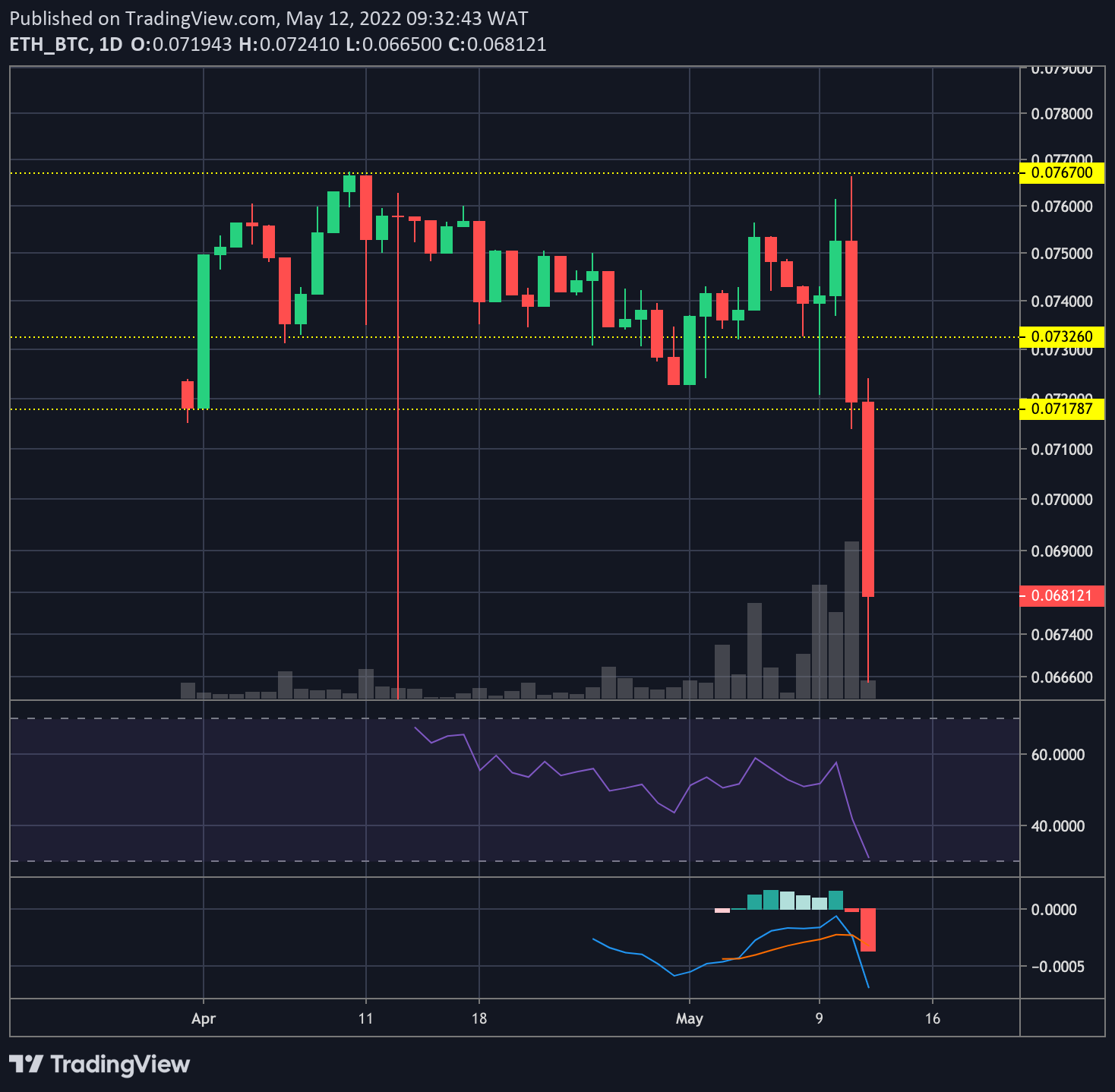 Other major altcoins such as Cardano, Polkadot, Chainlink, Avalanche, Ripple and Solana lost more than 50% of their values during the sell-offs. ADA fell beneath €0.45, its lowest level since February 2021, down more than 80% from its all-time high at €2.97 last September. 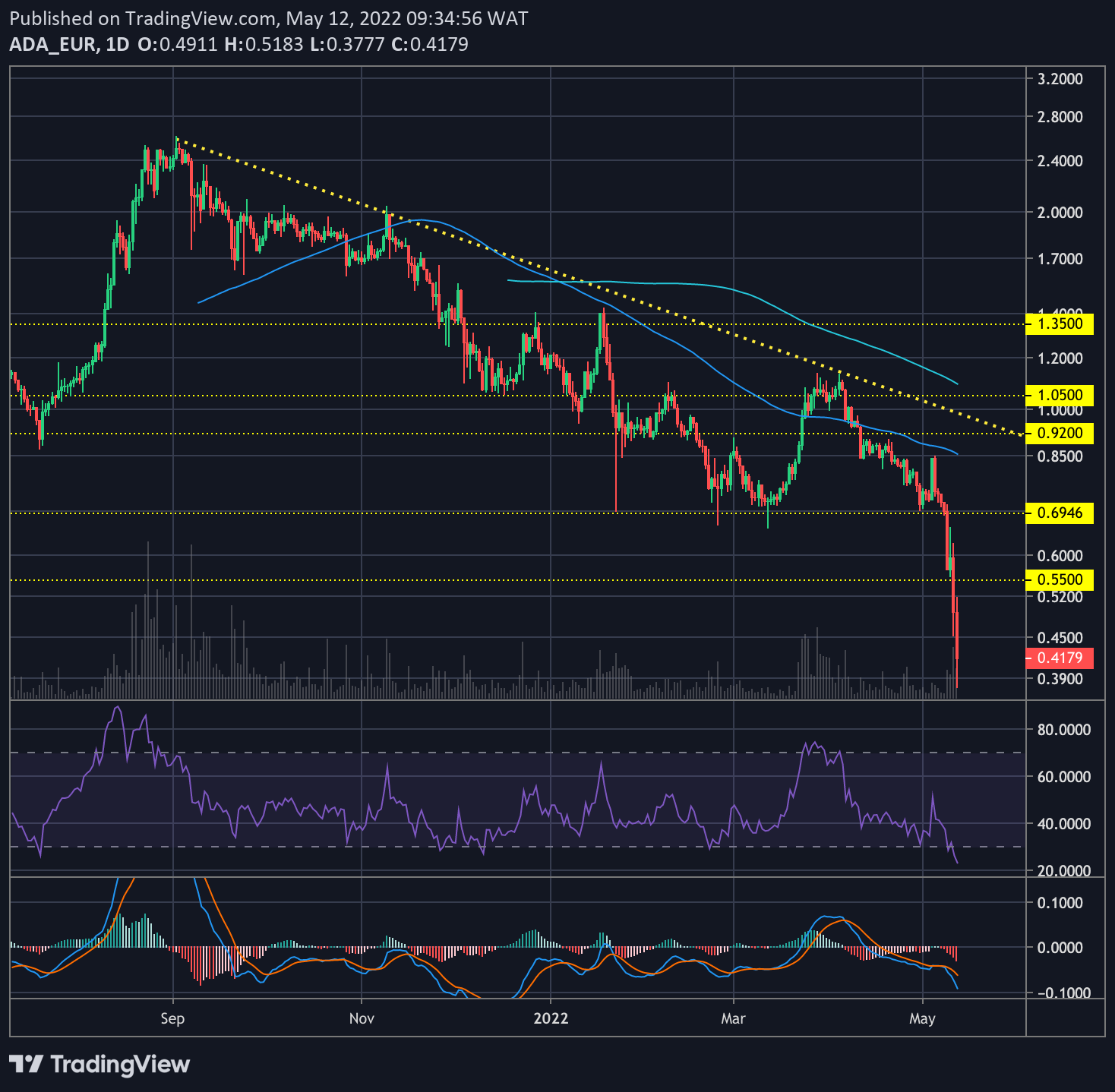 Strong selling pressure pulled the price of DOT below several support lines and down to €7, the lowest level since summer last year. DOT had reached an all-time high price of almost €50 in November last year. 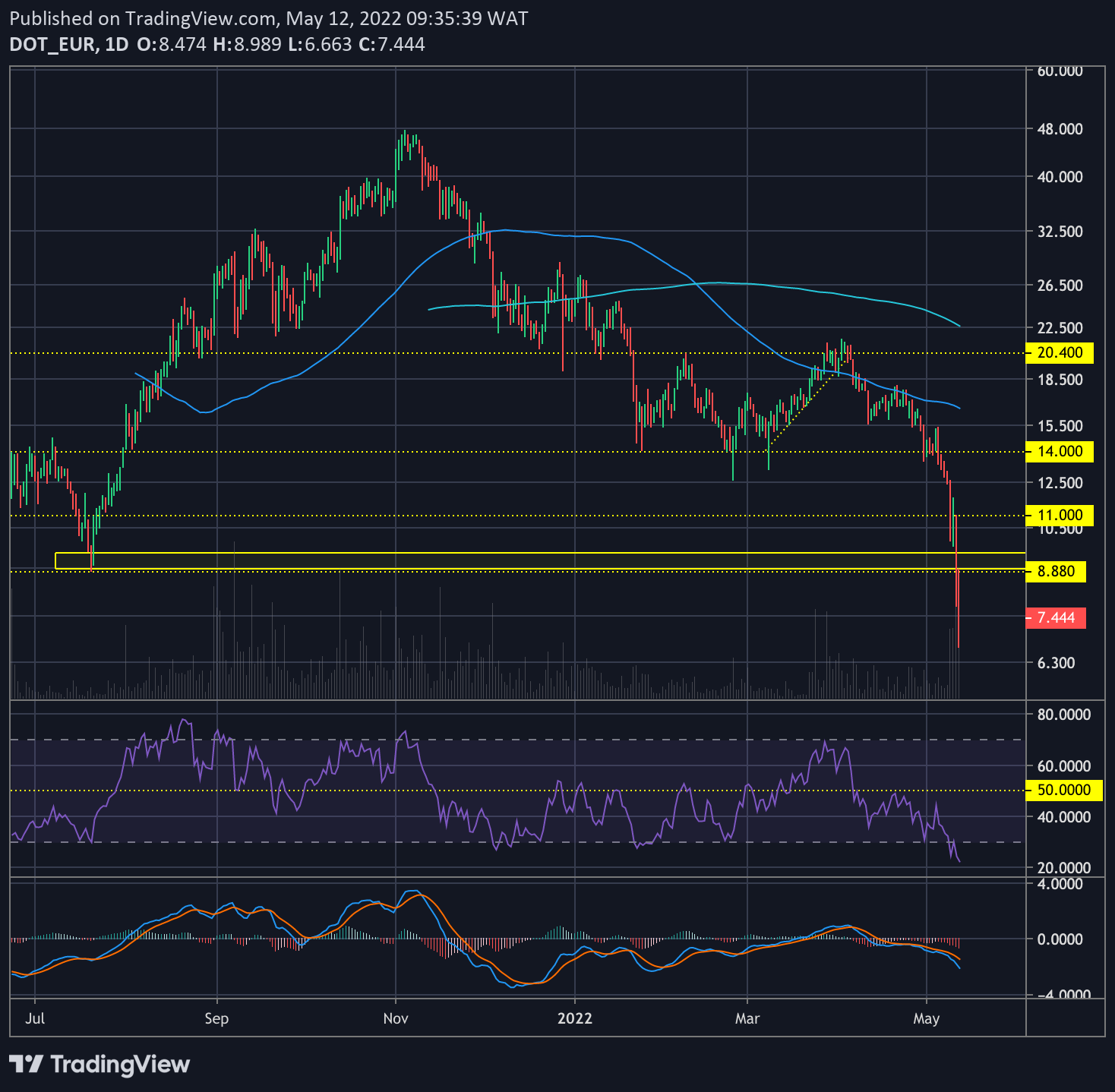 LINK moved lower together with the market as the token collapsed to €5, posting losses around 85% since its all-time high in 2021. 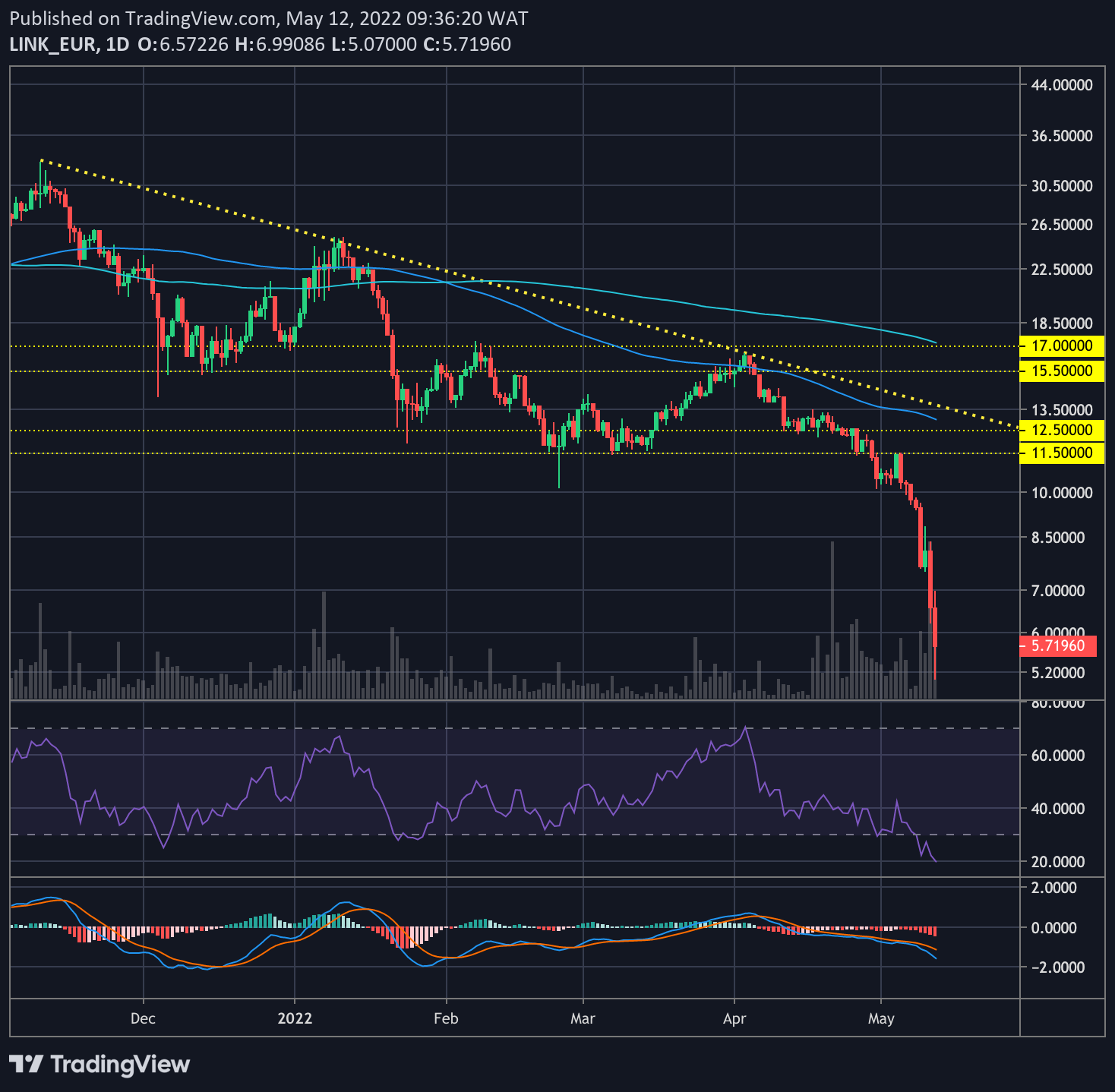 XRP is another coin that suffered major losses but managed to rise to the top 10 cryptocurrencies by market cap after LUNA exited from the list. XRP is now the 6th biggest coin by market cap, valued at €21 billion. Its price fell beneath €0.4, levels last seen in March last year. 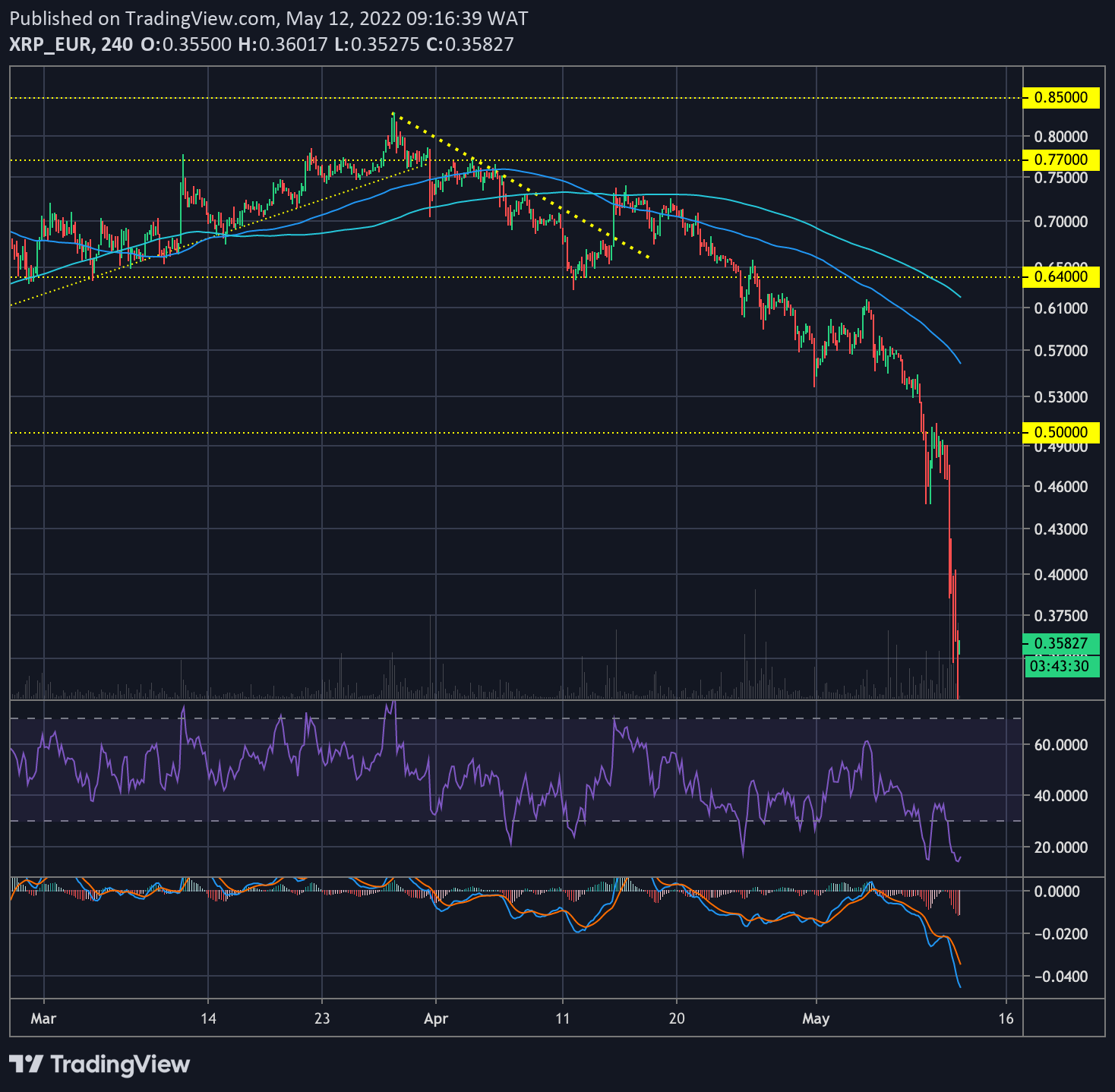 SOL and AVAX were among the biggest losers, falling by more than 50% in a week. AVAX dropped to €20, while it had been trading above €60 at the beginning of May. 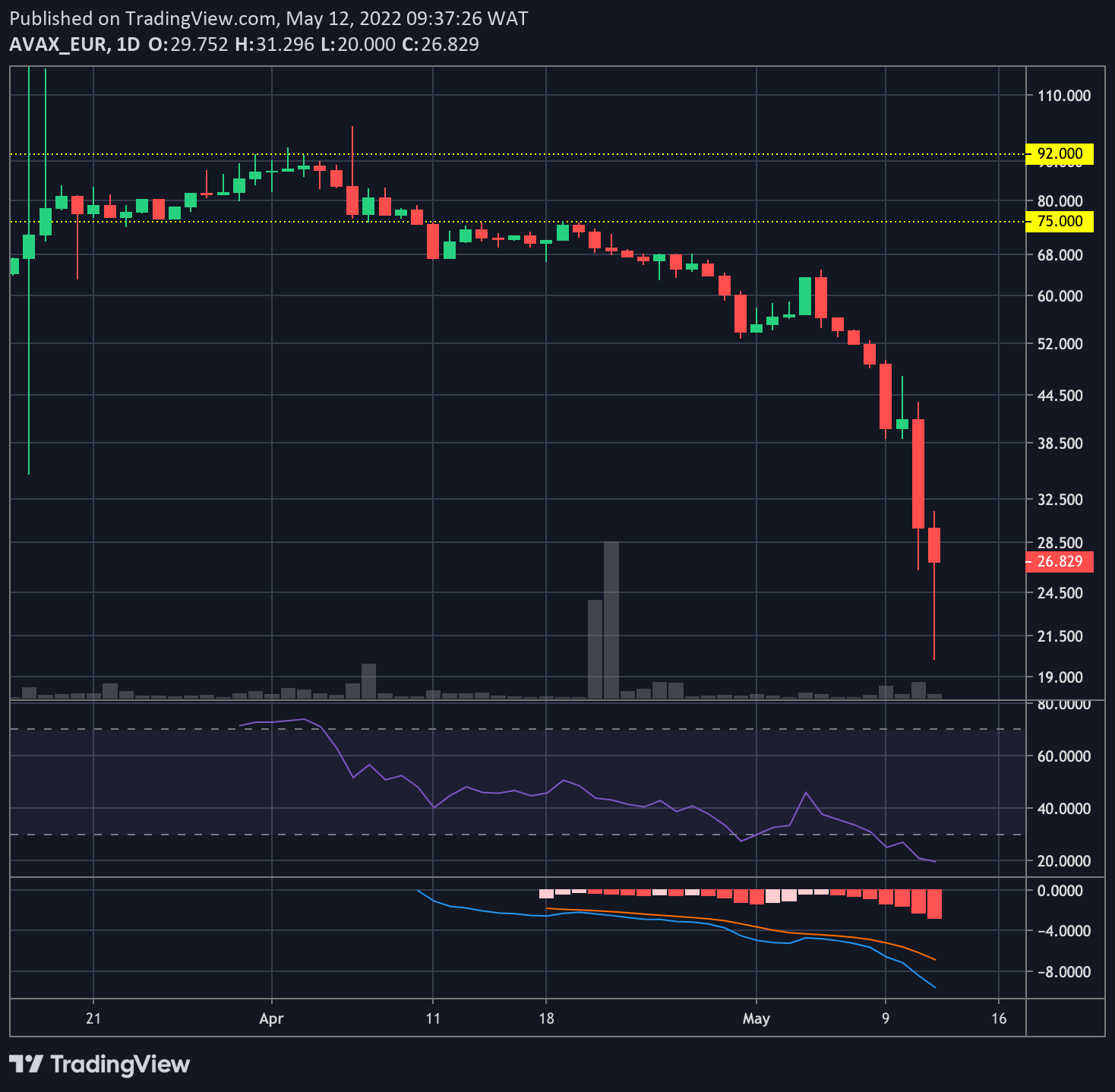 SOL traded slightly under €90 during the first days of May but dropped to €40 this week. Despite the massive plunge, SOL is still the 8th biggest crypto by market cap, valued at around €16.7 billion. 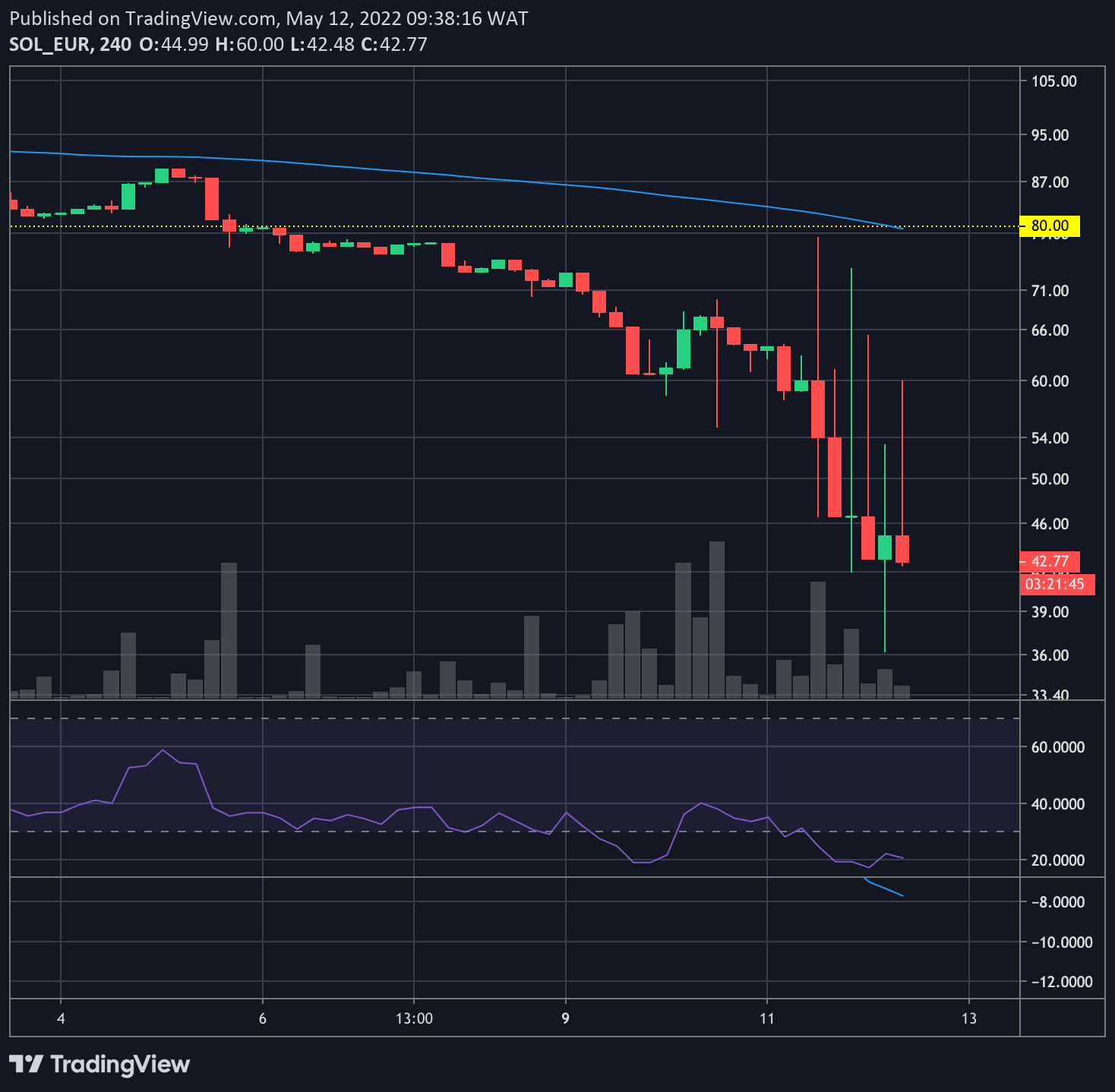