One week has passed since the crash of the Terra ecosystem and the Bitcoin and broader crypto market are trying to bottom out and find stability.

The crash of UST and LUNA has been one of the biggest events in the recent history of crypto, akin to the collapse of Mt. Gox in 2014. LUNA fell to almost zero and the algorithmic stablecoin UST lost its peg to the dollar.

This event constituted a major setback for investors, especially for those who were storing their savings in UST and also led to doubts about other stablecoins. Investors moved around €6.6 billion out of the leading stablecoin Tether (USDT). As a result, Tether’s circulating supply dropped some 10% and USDT briefly dropped from its dollar peg as well. However, USDT remains the 3th biggest coin by market cap, after Bitcoin and Ethereum. Theoretically, stablecoins such as USDT and similar competitors are meant to keep enough fiat currency in their reserves to allow users to exchange their stablecoin holdings for fiat currencies. These reserves are kept in cash and cash equivalents, including treasury bonds.

The case of LUNA was different as their UST held reserves in Bitcoin and other major cryptocurrencies.

Bitcoin is potentially forming a bottom

Usually, after major crashes, some time is needed for the market to stabilise and for investors to digest the news and data. At the moment, technical indicators are showing mixed signals, while the cryptocurrency markets move in sync with the traditional financial market, especially US major stock indices. The traditional stock market is moving bearishly as well, with all the macro factors contributing to increased downward pressure.

Last week, Bitcoin closed with a somewhat bullish weekly candle, which can be interpreted as a bullish hammer formation, with the real body standing at 30% of the total candle range. This formation, combined with a weekly breakout failure pattern, may imply a reversal is pending. 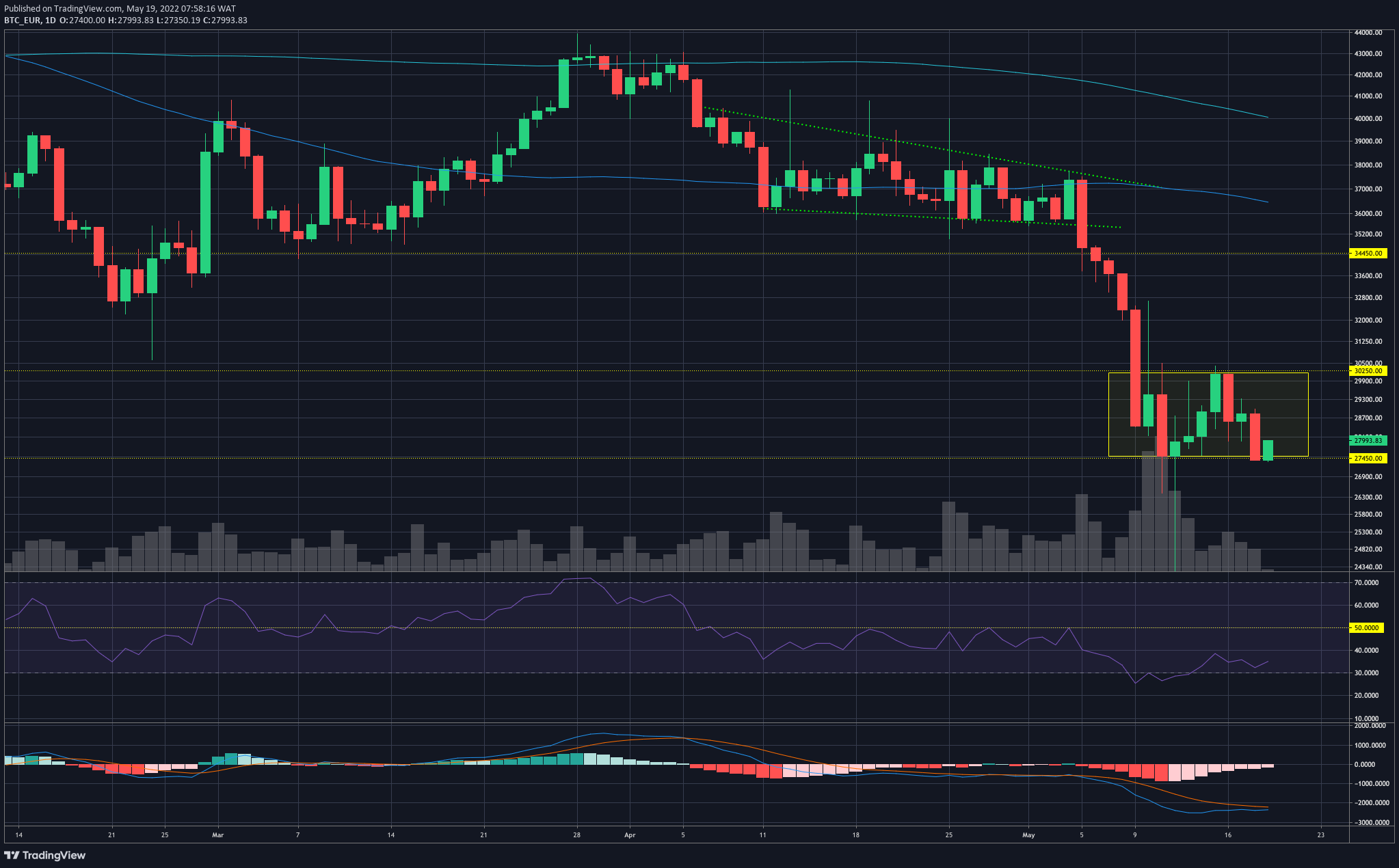 Bitcoin’s daily chart shows a trading range between the €27,400 and the €30,250 region, in the same area of the support levels of summer 2021. A breakout above or below this range may show the direction of the next price movement.

The collapse of UST and LUNA has likely represented a fundamental capitulation event, which marked off selling and panic reactions. Traders' emotional bias is driven by fear and greed, which is currently pointing at levels of extreme fear for the second week in a row. Last week, the Crypto Fear & Greed Index moved up slightly and is now standing at 13/100.

Historically, buying into extreme fear regions has been more profitable than selling off or short selling in deep bearish phases. However, the bottoming process after a major crash can take a long time to absorb all the negativity.

Ethereum and other major altcoins are showing signs of recovery, though the situation still is uncertain. ETH’s price saaw a local bottom at €1,760 and is now moving inside of a trading range. The first degree of major overhead resistance can be found at the €2,300 level, while downside support is located at €1,760. 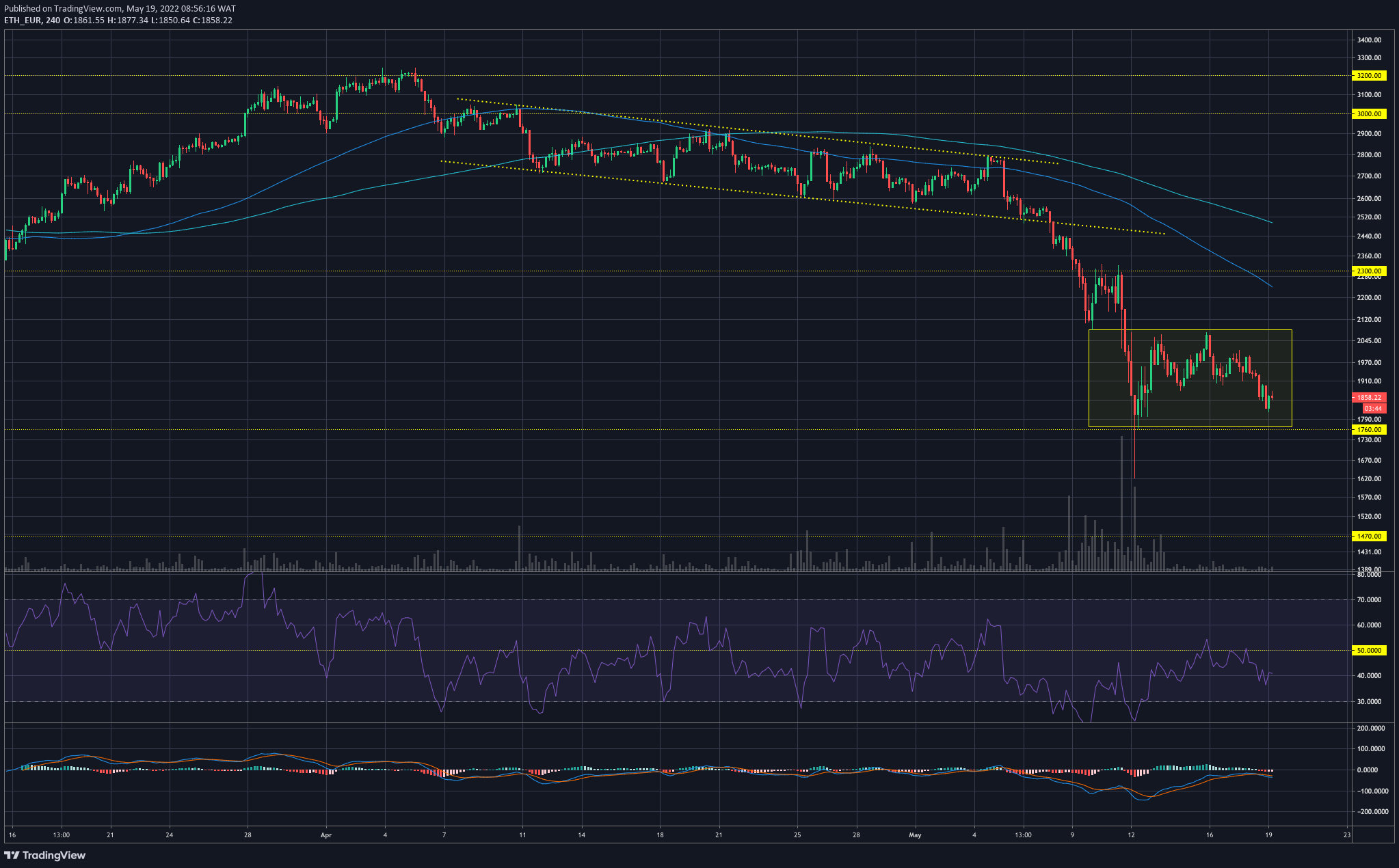 Even though May was an unfortunate month for Ethereum in terms of price, it proved to be a good one when it comes to mining. After a steady increase during April, Ethereum’s mining hashrate touched a high of 1,126,674.2703 GH/s on May 13.

Solana has been one of the best performing crypto projects during the last 18 months, but it also took one of the hardest hits last week, as nearly all smart contract tokens plummeted. SOL’s price dropped by around 50% in just 7 days and found a local bottom at €40. 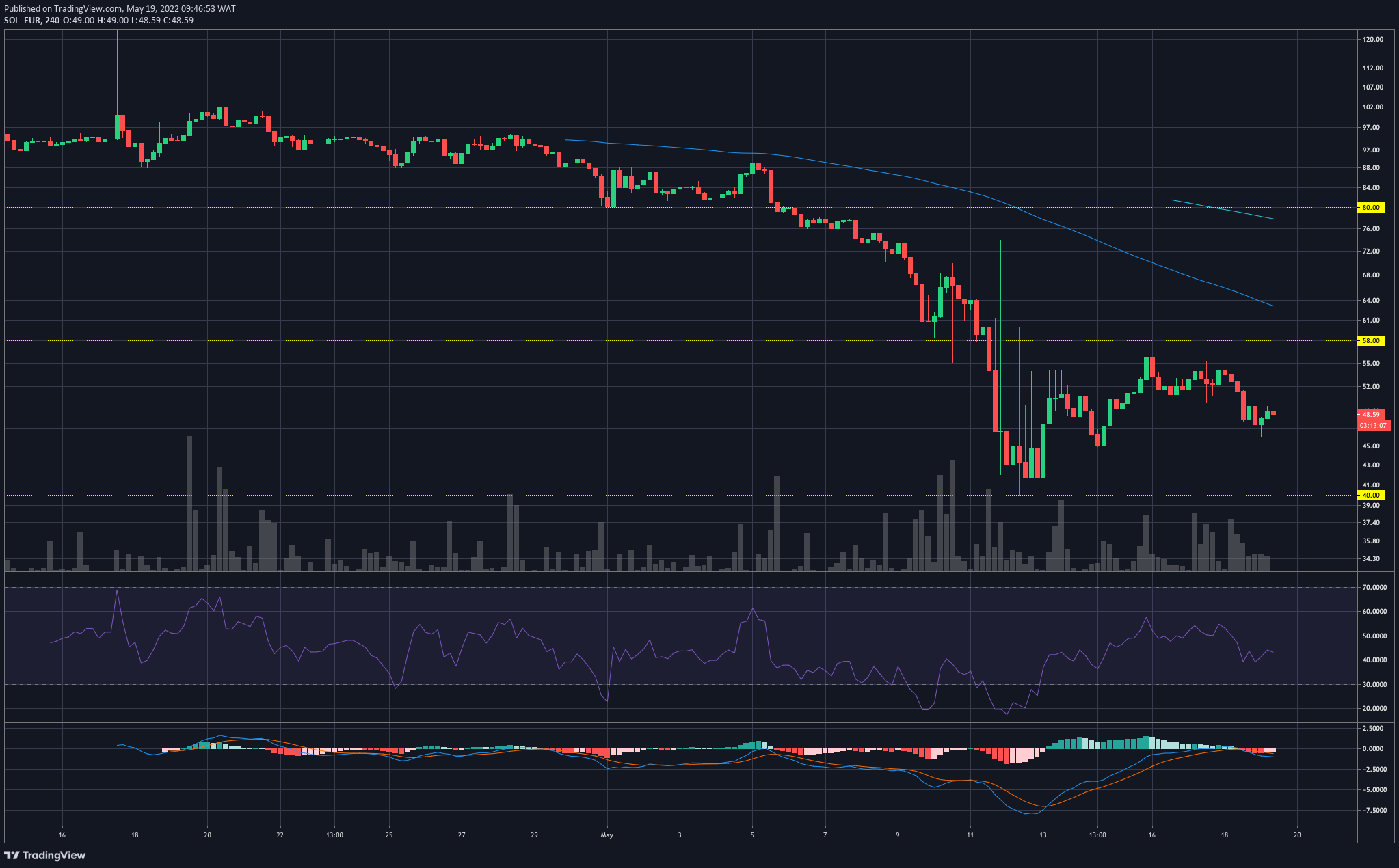 Solana’s Total Value Locked (TVL) continued to plunge during the third week of May due to bearish trends in the market that have seen declining interest in decentralised finance (DeFi).

IOTA managed to bounce back over the important support level at €0.32. This jump comes after a dip to the €0.22 level, its lowest since January 2021. Indicators are still bearish, with IOTA trading under important MA lines. 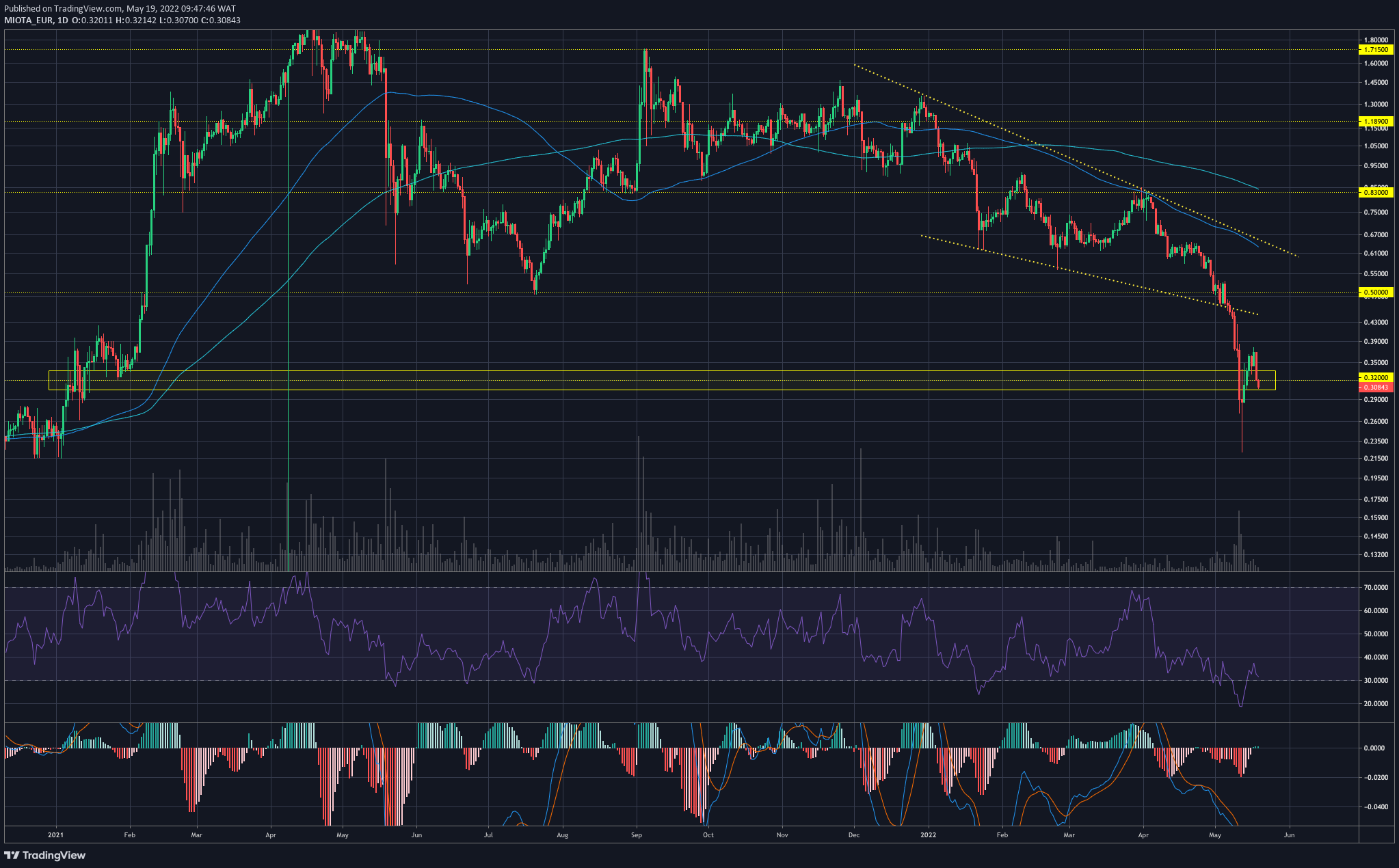 DOT touched a bottom at €6.6 and made a rebound back above the resistance zone. It is now testing again the €9 level, which has been acting as a support level since July 2021. TA indicators like the RSI and MACD are still in bearish territory. 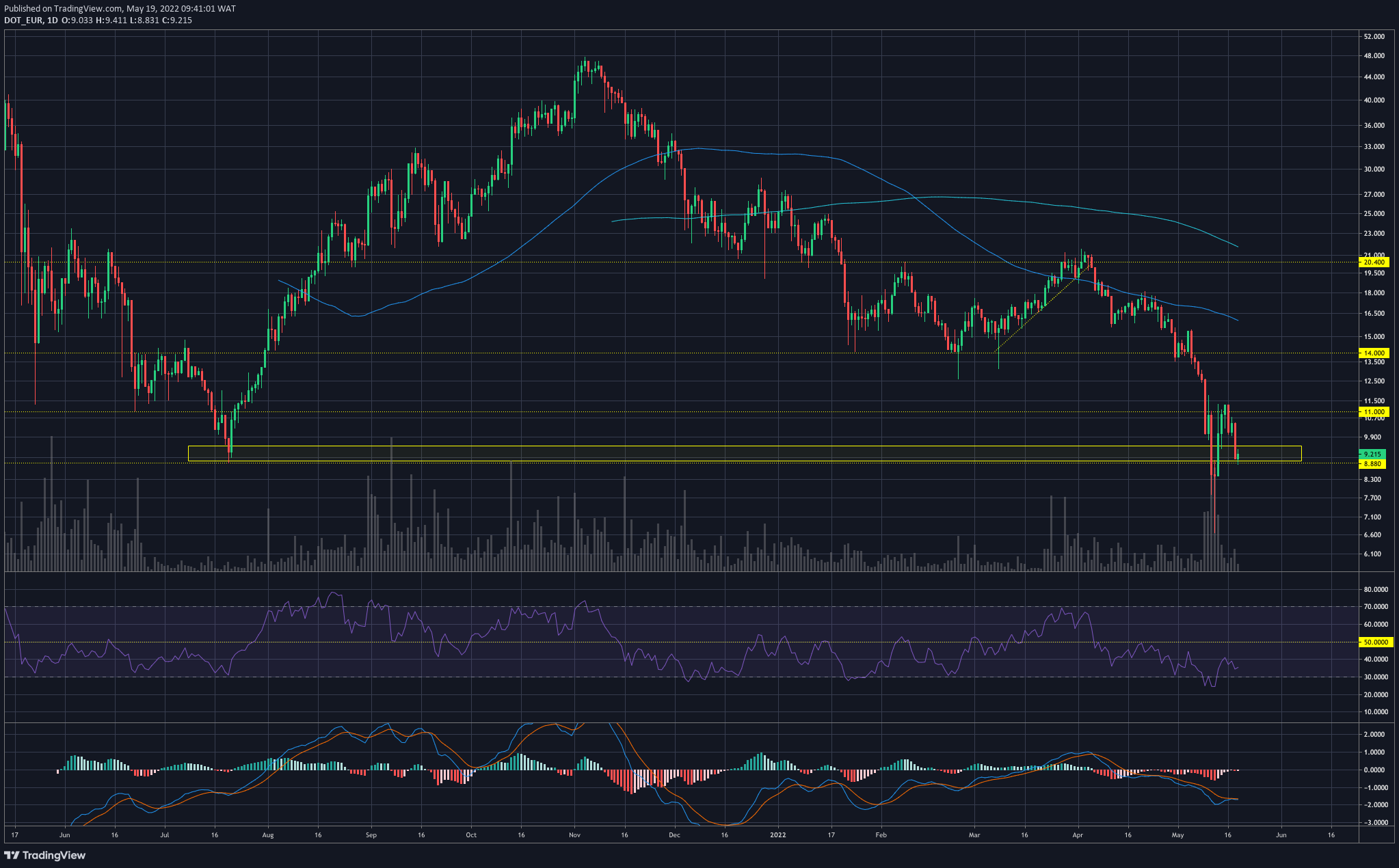 XRP touched a long support trendline and is now trying to reverse from its bearish trend. Long wicks suggest buyers are aggressive at these levels but the price is still trading deeply under important moving averages. 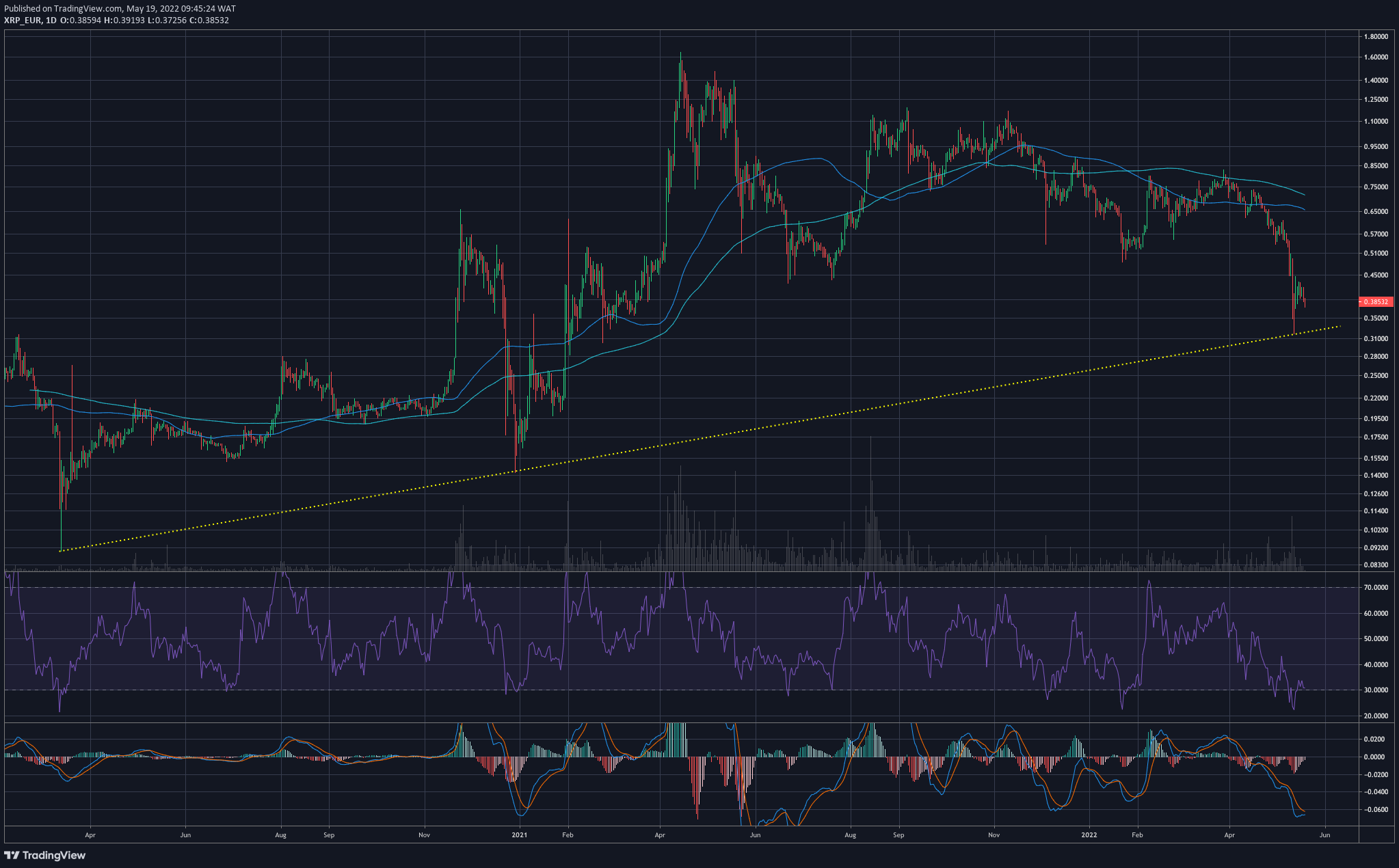 Several indicators show that XRP is oversold which means it may be able to push in the direction of an upward trend in the short term. However, to validate that reversal, the price must move towards a higher-high and onto a higher-low formation.

The current selling pressure in the crypto market is showing no sign of diminishing any time soon, with Bitcoin’s price decreasing for seven straight weeks for the first time ever. This momentum still favours the bears.