The past few months have been rough for the flagship cryptocurrency, but Bitcoin has managed to break the negative trend by marking its first green weekly candle since late March. Breaking free from its longest-ever negative period potentially indicates that BTC might finally be coming out of the other side and forming a bottom at these levels.

The past seven days have seen little action in the cryptocurrency market with Bitcoin mostly moving in range and the bulls being able to hold the significant €27,450 support level. Bitcoin struggled to climb over the resistance level of €30,250 as sellers stepped in and pushed the price back to the wide range, which it has hovered around for the past month. 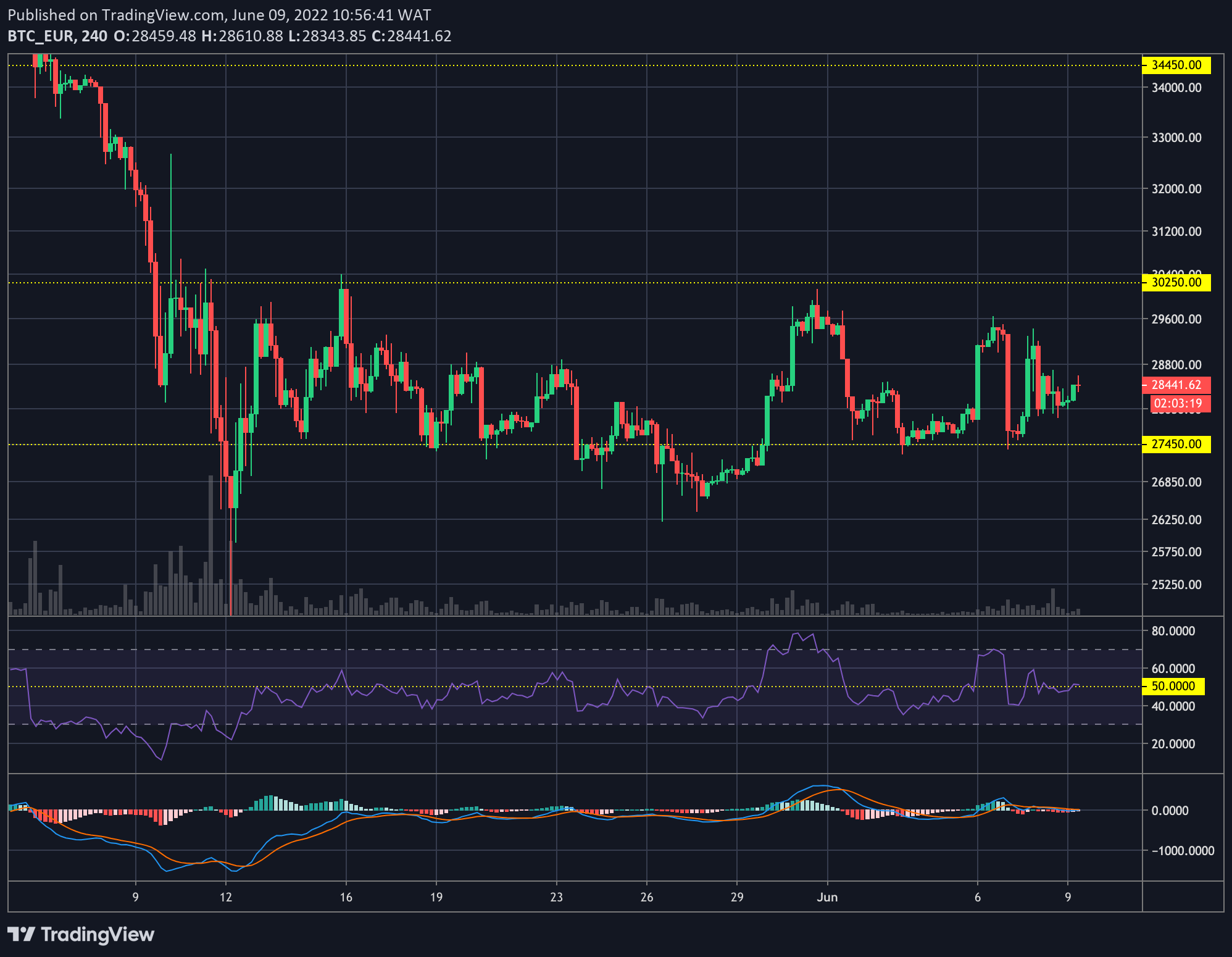 The long wicks indicate there are still some large sellers remaining at a higher level with momentum indicators also showing mixed signals. The price is under important moving averages that need to flip in order to reverse the bearish trend. The feeling of extreme fear is still elevated with the index readings at historical lows of 13 out of 100. Although the price might be forming a bottom, it may take longer for bulls to return to the floor at full scale.

Intraday charts are volatile, but showing early stages of recovery

Bitcoin’s move to green has brought some much-needed optimism to the overall market. The major altcoins are also showing the early stages of recovery, but intraday charts remain volatile. Ethereum is trading inside of a falling wedge pattern and under a descending trendline, which acts as the first major resistance level. The falling wedge pattern is a continuation pattern formed when the price bounces between two downward sloping, converging trendlines. It is considered a bullish chart formation but can indicate both reversal and continuation patterns – depending on where it appears in the trend. 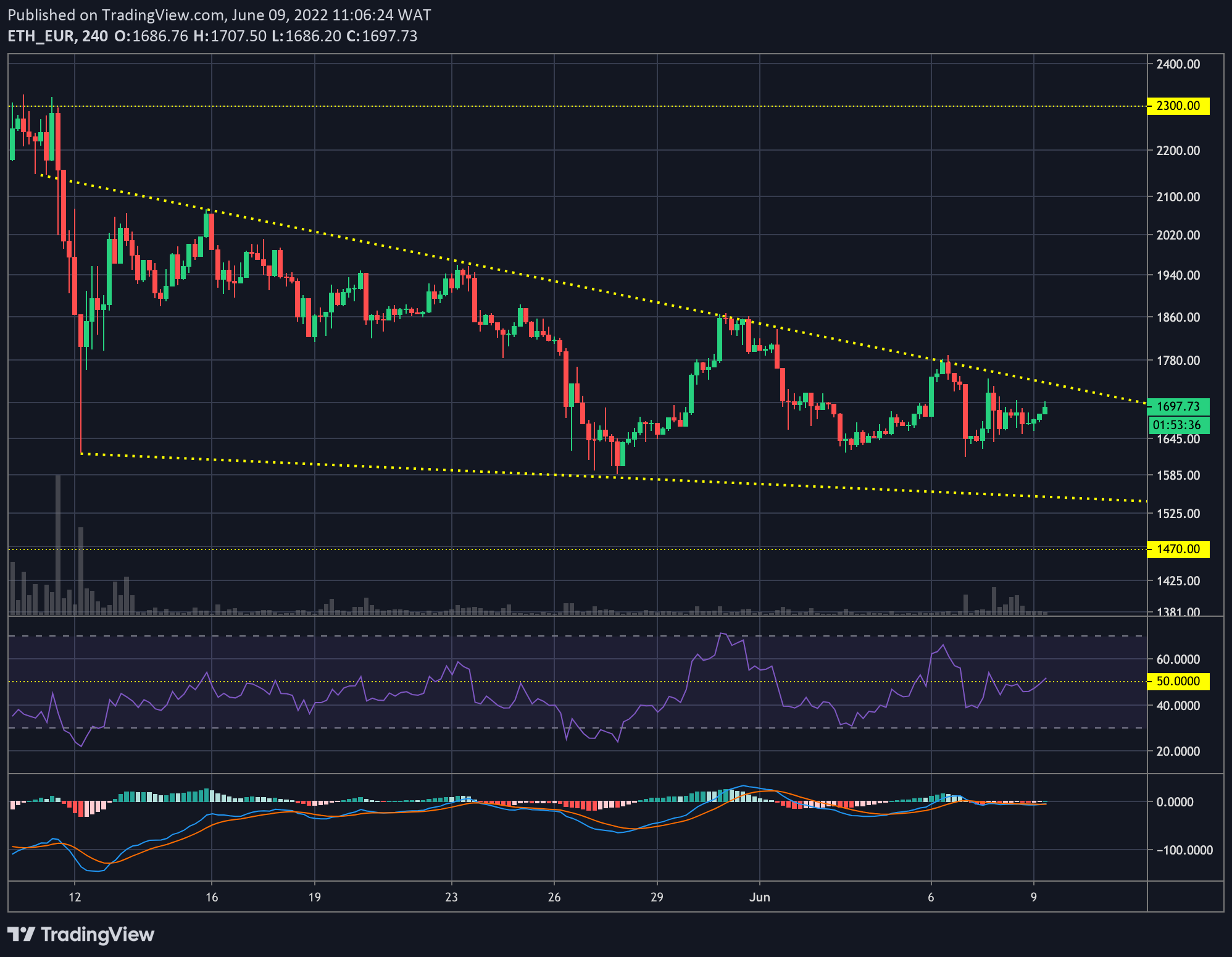 Ethereum’s Ropsten testnet has successfully merged its Proof of Work execution layer with its Proof-of-Stake Beacon Chain in a process that’s identical to the one that the main Ethereum network will undergo later this year. The Ropsten testnet was created in 2016 and is seen as one of the best replications of the Ethereum mainnet. Its resemblance to the ETH blockchain allows developers to conduct realistic tests before implementing changes to the Ethereum network.

Cardano has surged around 20% since the start of June, marking one of the best performances among major altcoins. The price is moving above the trendline support level, with the RSI teasing bullish territory and indicating a possible shift in favour of a bullish recovery. 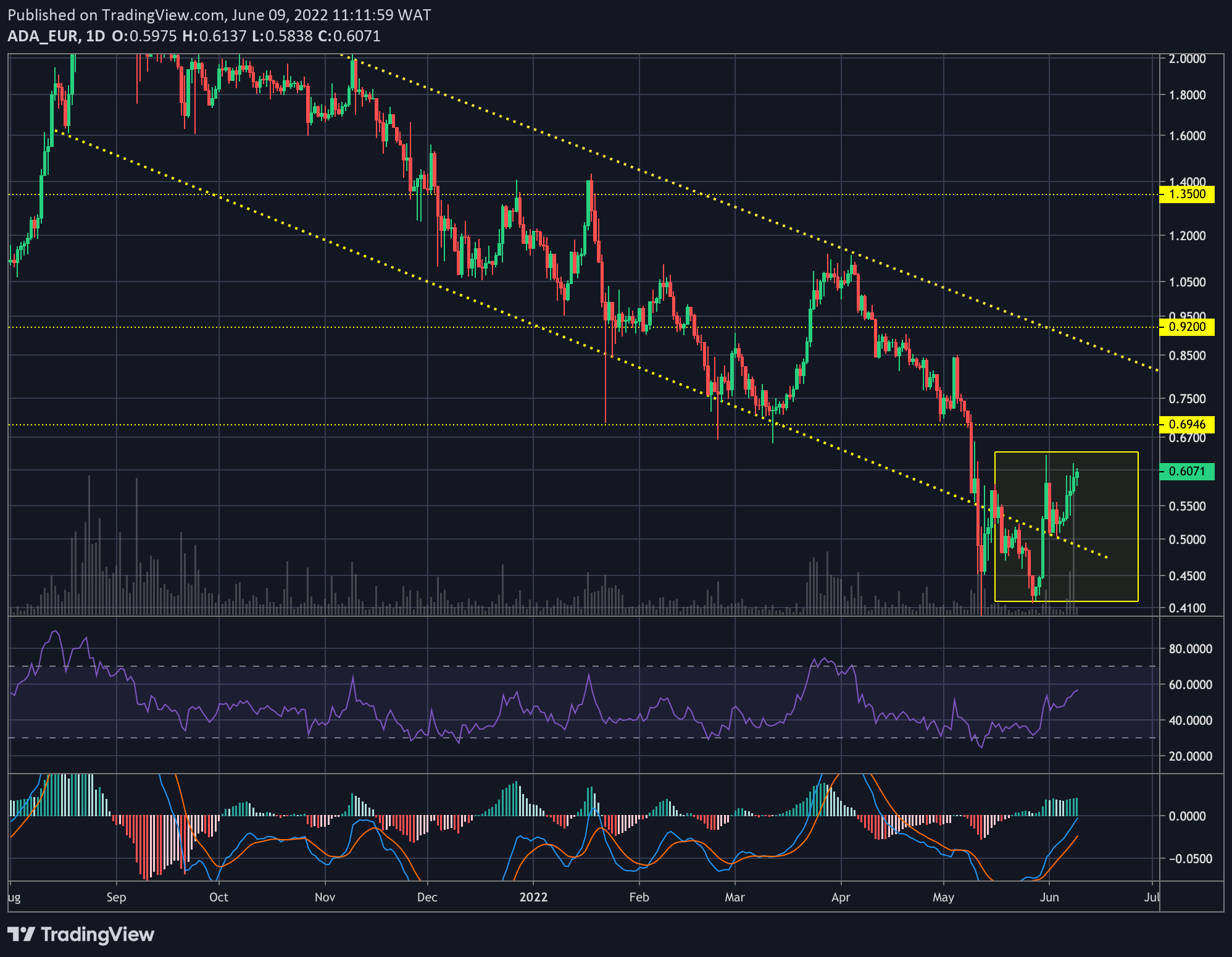 The surge in price is likely connected to the upcoming Vasil Hard Fork, which is scheduled to take place on June 29. This aims to improve the network’s performance and make it easier for developers to use the Cardano blockchain to create applications and the upgrade is expected to substantially improve the Plutus smart contract platform.

Ripple bulls are holding their positions above the long-term support trendline on the higher time frame. The support was already tested three times in the past. On the lower time frame, XRP is forming a wedge pattern, with support around €0.36 and resistance at the €0.38 level. 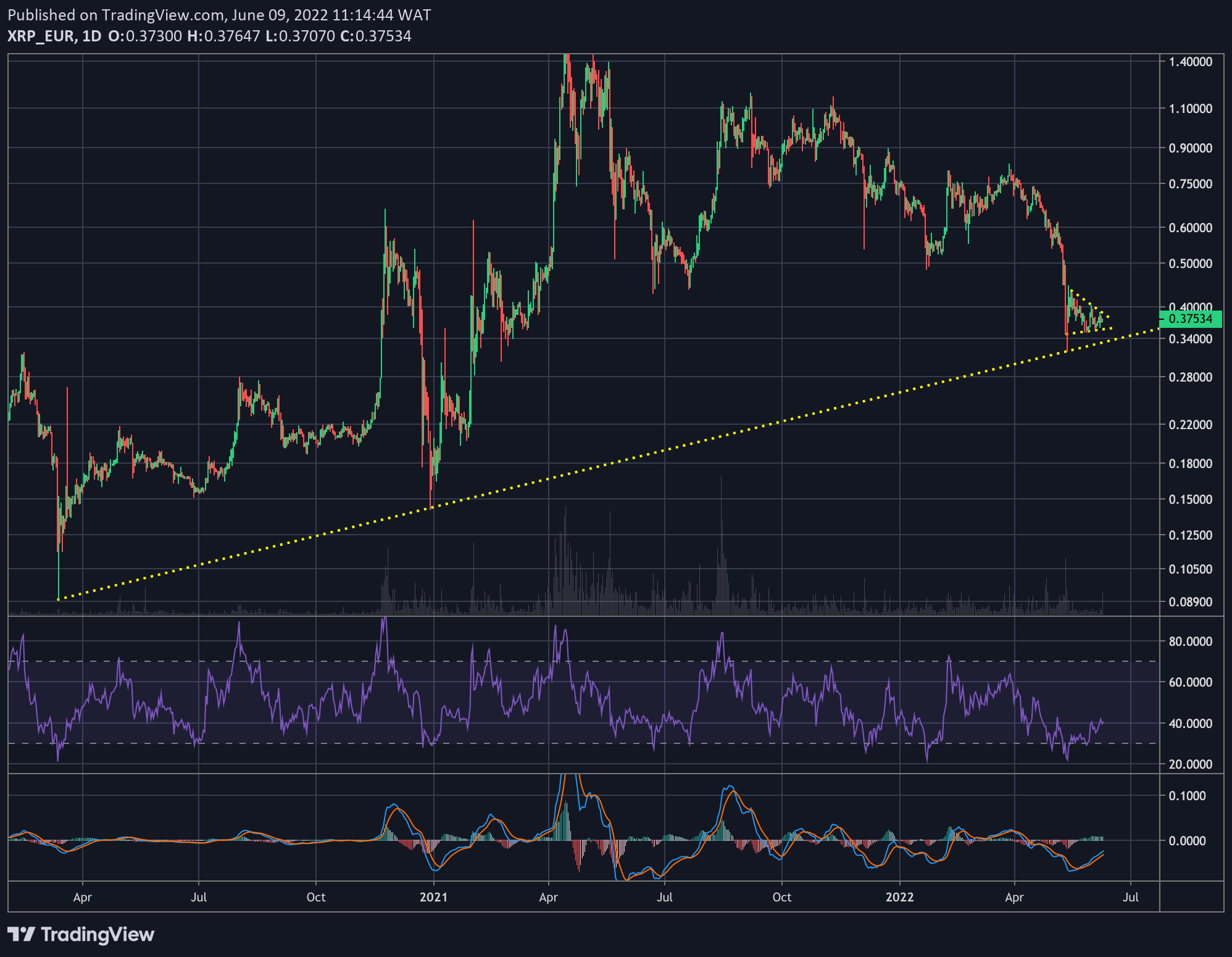 Solana plunged below the support level of €36 on the daily chart, but bulls managed to push the price back up, printing a long tail on the candlestick. Bulls are holding the support level for now and the RSI has formed a positive divergence, indicating that bearish momentum may be reducing. However, SOL still trades under a descending trendline, which is acting as a major resistance level for now. 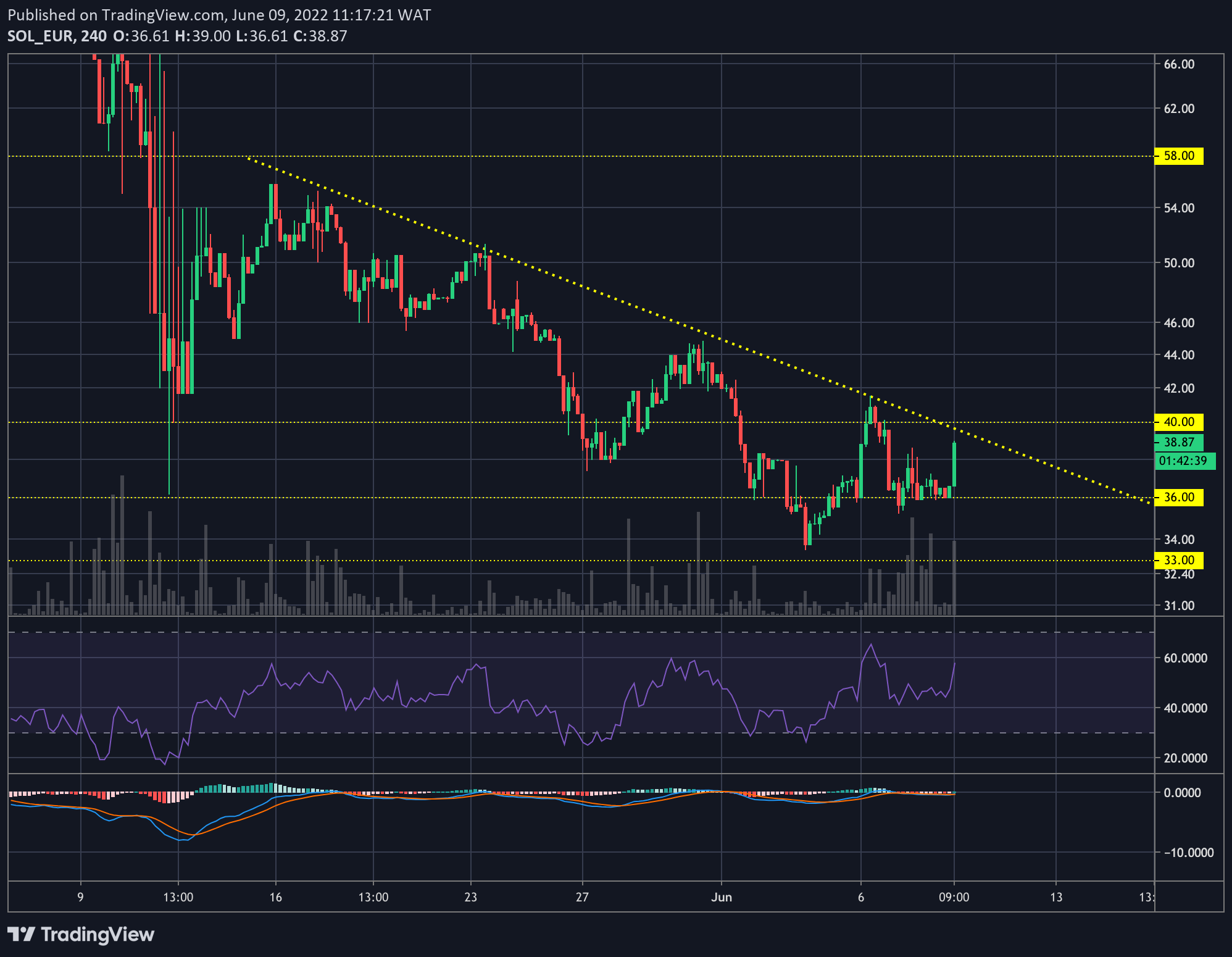 Solana Ventures and the Solana Foundation launched a €100 million investment and grant fund to support crypto projects and other initiatives based on Solana in South Korea.

Polkadot has formed a symmetrical triangle, which usually acts as a continuation pattern. The price is currently bouncing off the lower support level as buyers are attempting to push the price up to the resistance line of the triangle. 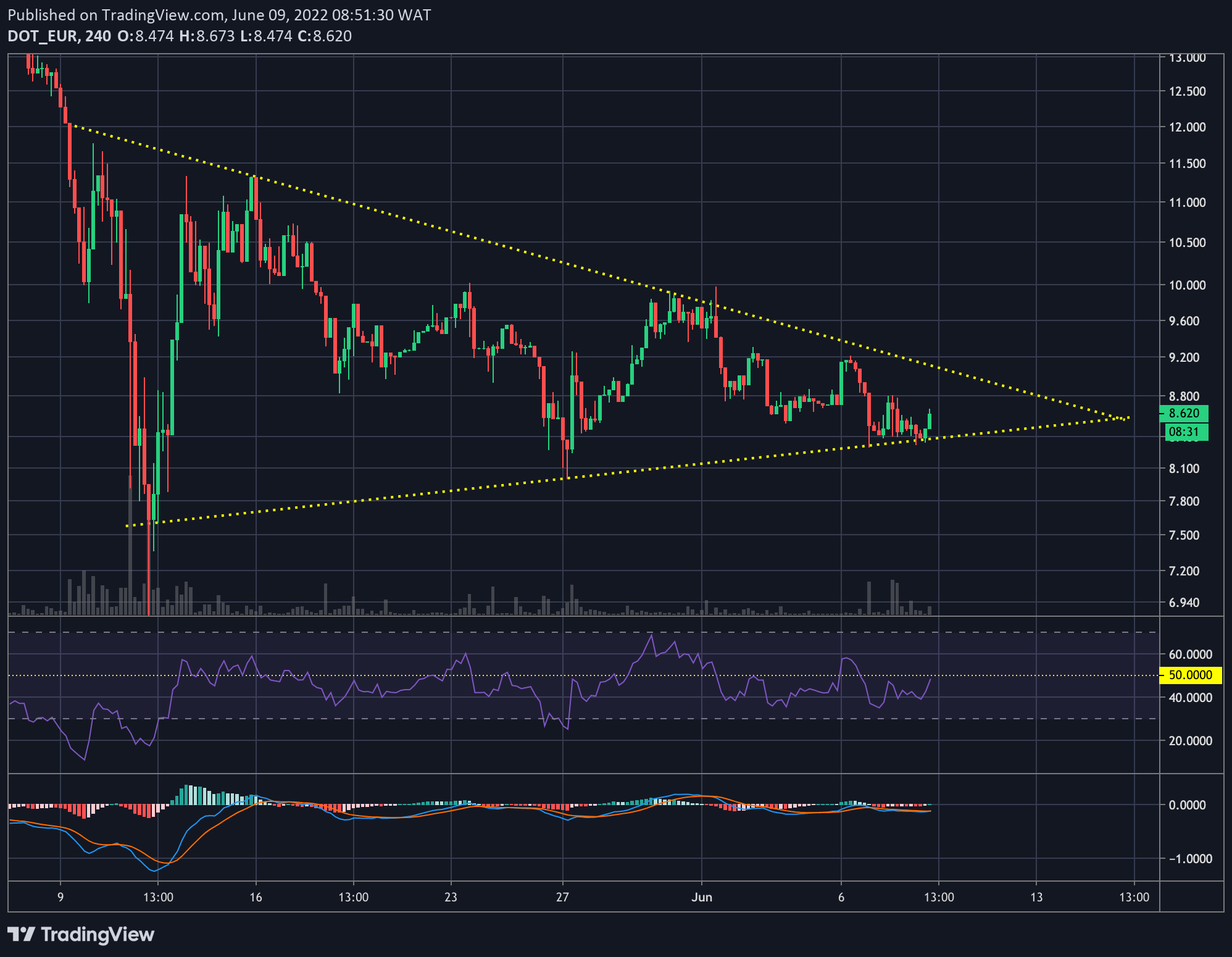 A break and close above the triangle will be the first indication of a potential trend change. Alternatively, if the price turns down and breaks below the triangle, it will suggest that bears are in control.

Avalanche bounced over the descending trendline, indicating that bulls are defending those levels. The price is now testing the trendline which, in this case, acts as a new support level. If buyers manage to hold, the AVAX/EUR pair could pick up momentum and start its northward journey. 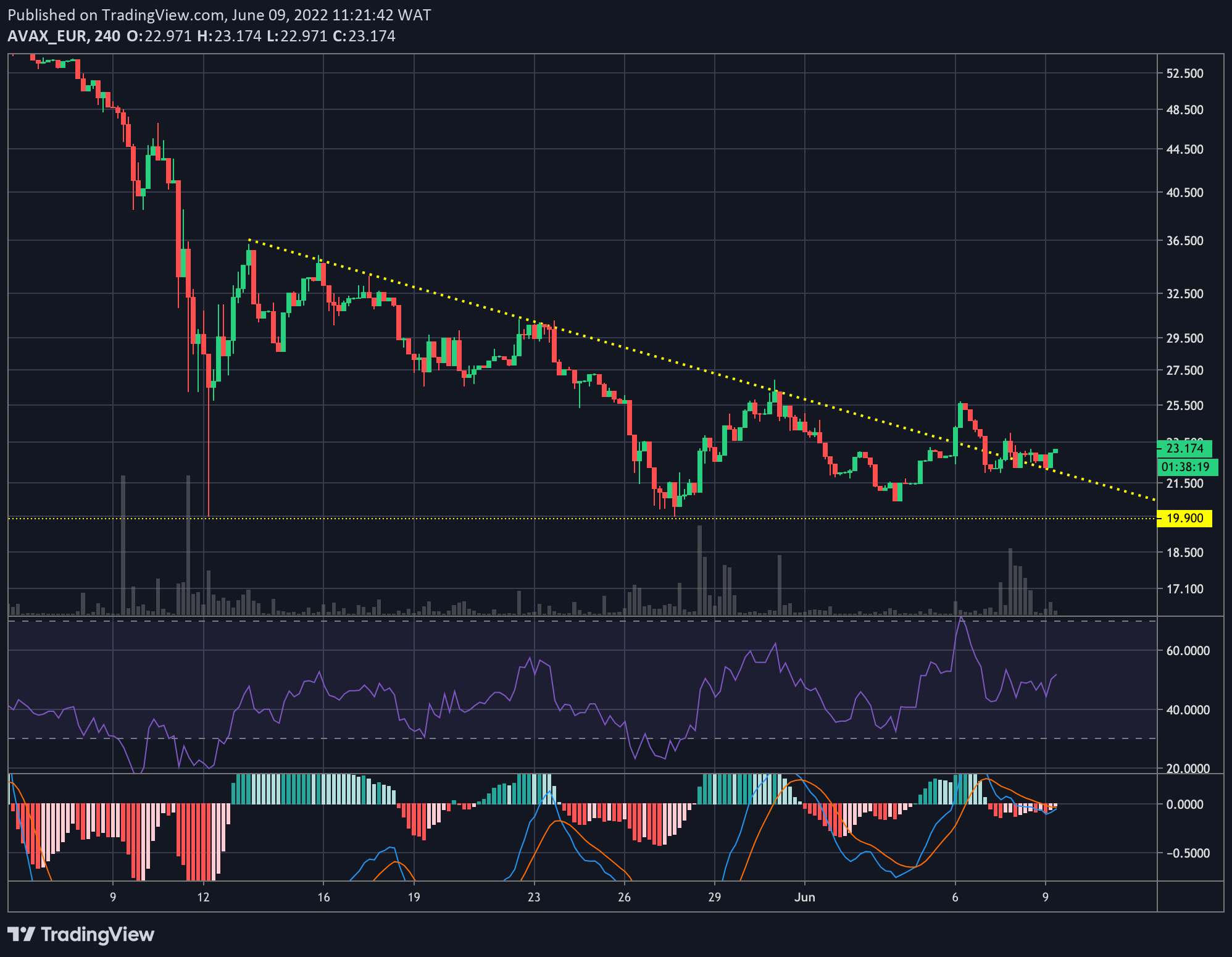 Though Bitcoin and altcoins flash green on the weekly charts, overhead resistance levels will continue to pose a challenge in the short term. The correlation with major US indexes and macro data continues to impact crypto and will also be a driving force in the future.