Crypto goes from bad to worse

The current crypto market conditions can only be described as extreme as ongoing corrections saw the price of all major cryptocurrencies tumble to levels not seen in almost two years. During this economic downturn, the total market cap has dropped below €850 billion, which is down more than €2 trillion from the peak. Selloffs were also seen across traditional financial markets, driven by fears of rampant inflation, imminent interest rate hikes and the prospect of recessions in major economies. The Crypto Fear & Greed Index, which takes several factors into account to determine overall conditions among traders, plummeted to 7/100. The last time it was this low was in August 2019. At that time, Bitcoin was struggling to stay above the €10,000 level and the indicator bottomed at 5/100, which was the absolute all-time low ever tracked by this index.

The current drawdown in price is largely driven by changes in the macroeconomic situation and geopolitical tensions. Increases in interest rates, coupled with quantitative tightening, have driven correlations across assets towards a level of 1 and we are seeing asset price selloffs across all of the financial markets. Europe has registered record inflation levels and inflation in the United States was reported at 8.6%, the fastest year-over-year growth in more than 40 years.

Adding oil to the fire last week was news from the crypto platform Celsius as the company suspended all customer withdrawals to stabilise liquidity and operations. Three Arrows Capital – a prominent cryptocurrency fund – is also rumoured to be facing massive liquidations as ETH prices continue to crash. The news has compounded prevailing negative sentiment in the market following the collapse of Terra in May, and a similar story is now happening to USDD which is the Tron DAO stablecoin. USDD depegged from the U.S. dollar and Tron DAO is trying to stabilise with a massive buying programme.

Bitcoin at levels from December 2020

In a dramatic week for the entire crypto market, Bitcoin has fallen below €20,000 to levels not seen since December 2020. The price touched €19,150, down almost 70% from the peak in November last year. On the downfall, Bitcoin has tested the long-term ultimate support region, defined by the 200-week moving average. Historically, Bitcoin had not stayed below this key threshold and typically brought sharp reversals soon after the retest. While the past is never a guarantee of future performance it is essential to account for this 200-week benchmark as the long-term support region, which will play a significant role in future once the market stabilises. 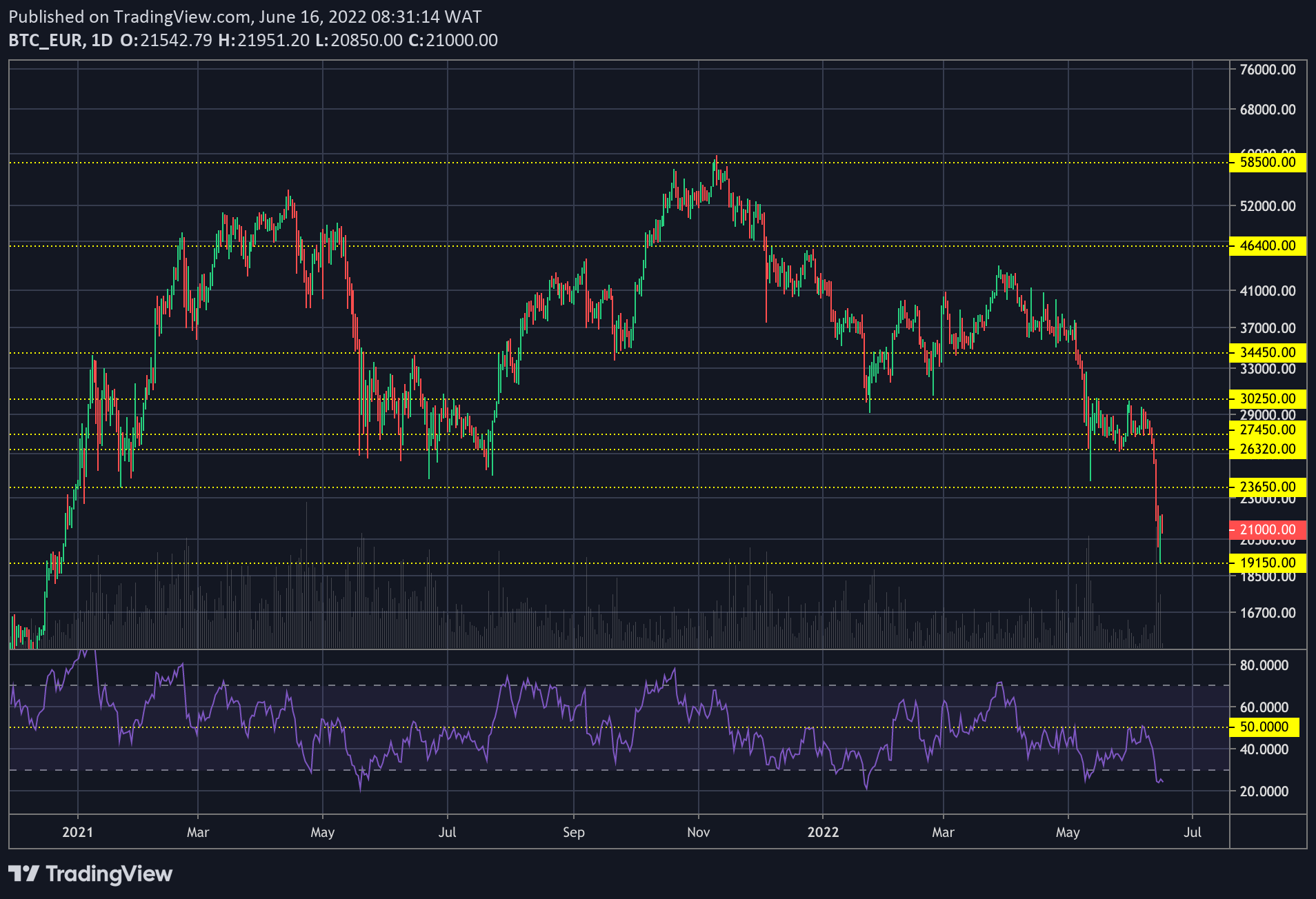 The capitulation event seems to have arrived with the Crypto Fear & Greed Index at 9, but the bottoming process will take some time. Amid escalated fears and panic selling, the charts are full of large wicks on daily candles that indicate a large amount of volatility.

Ethereum was one of the most substantial losers of the last week, dropping some 40% in just seven days to a low of €950 levels. The second-largest crypto is trading at its lowest since January 2021 and below the 2018 all-time high. 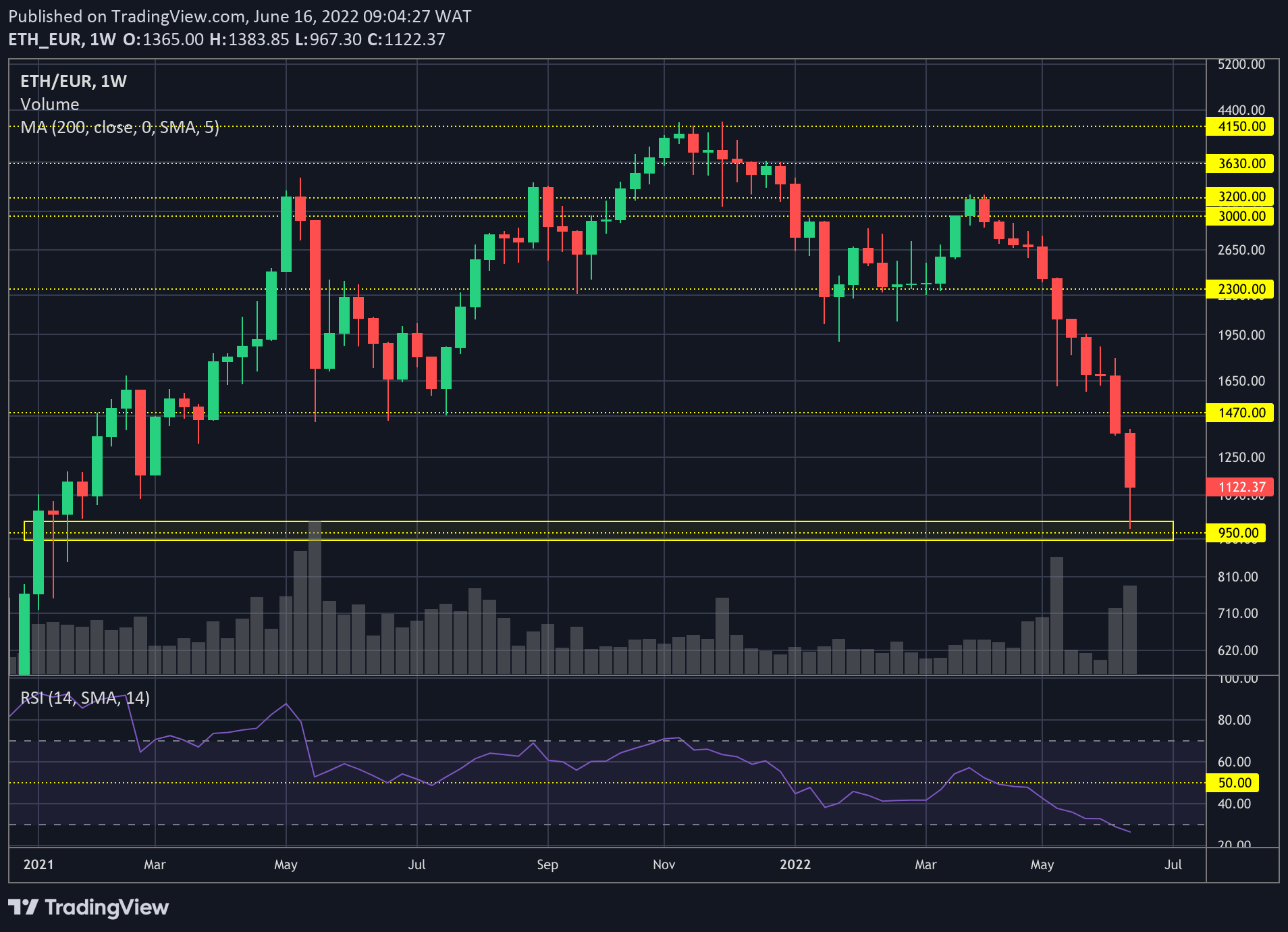 Ethereum printed 11 consecutive red candles in the weekly chart, the last positive closing was back in March.

Major altcoins are deeply in red this year as macro pressures combined with heavy sellers are pushing them into deep oversold positions.

Cardano has been following the general sentiment in the market but lost less in the recent crash compared to other larger cryptocurrencies. ADA has been outperforming Ethereum over the last few weeks and is already up over 88% against ETH after making a recent low. The price fell under the support trendline, but the bulls are now trying to push it back above. 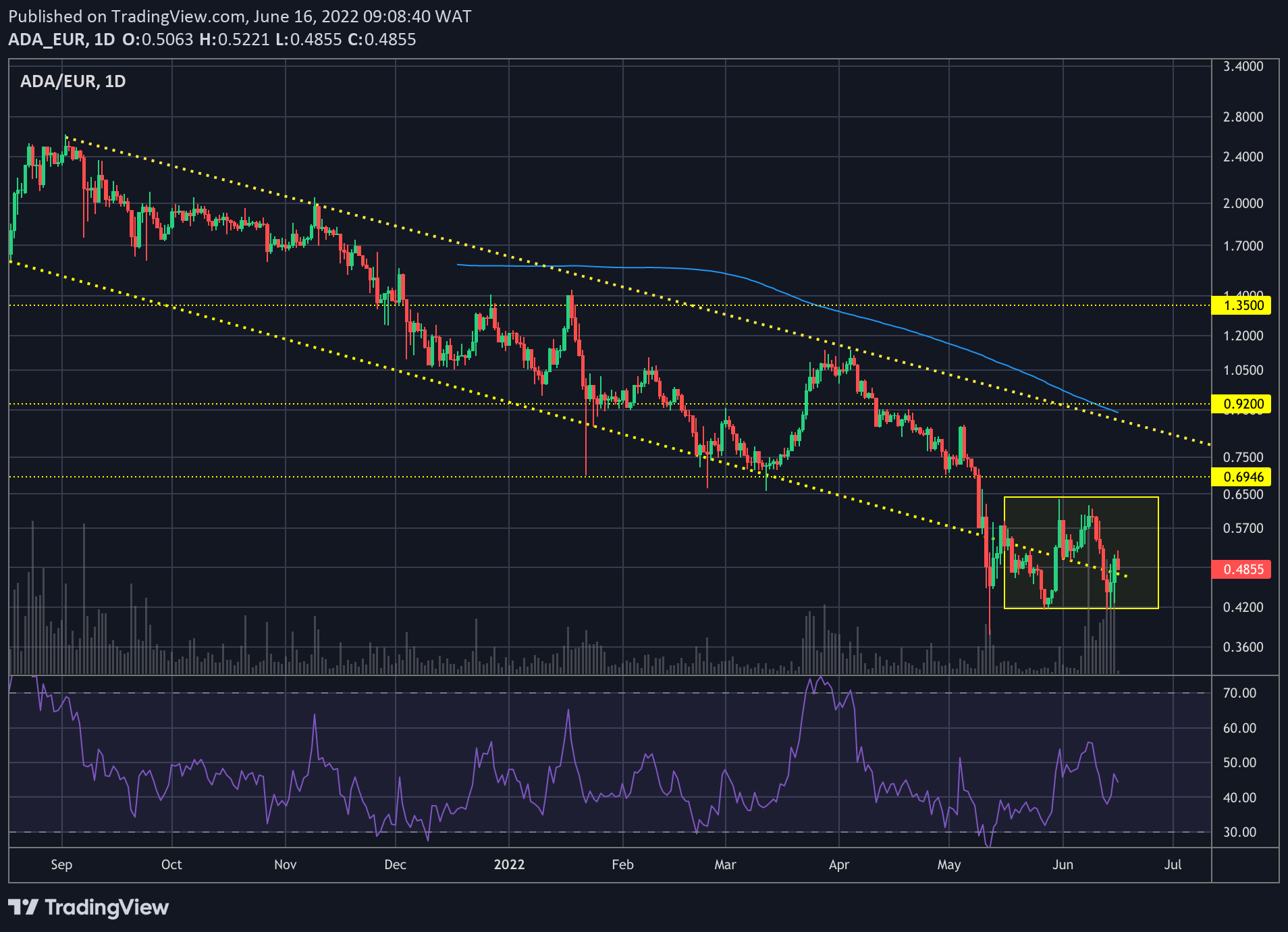 Chainlink is down 87% from its ATH and is currently holding onto its support level above €5.8. LINK lost the spot among the top 15 coins and is currently placed 21, with a market cap of around €2.6 billion. 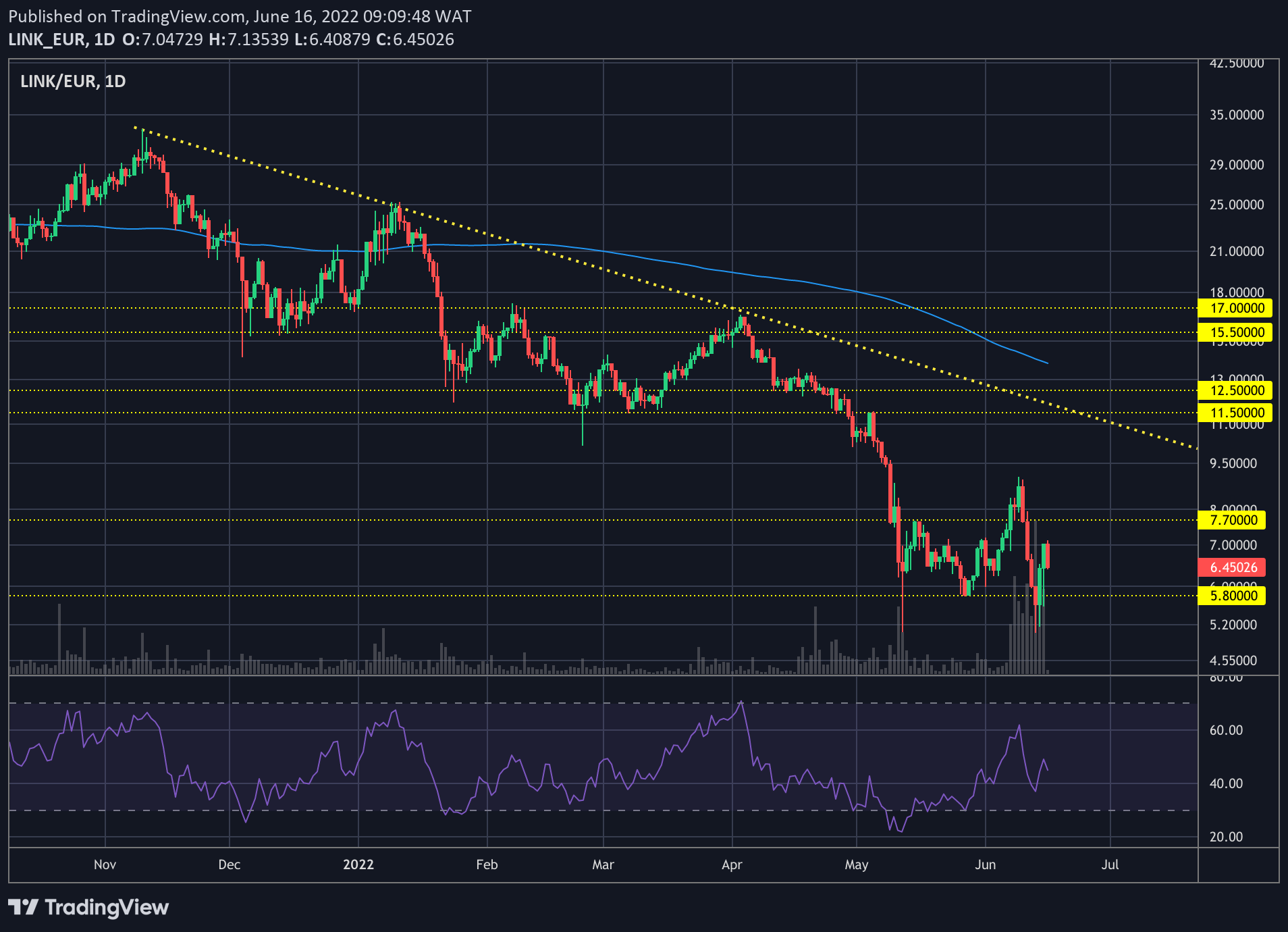 Solana was underperforming due to the number of outages so far this year and the bulls are having trouble turning the trend around. The price made a local bottom at €25 and is trading under the resistance trendline. Bulls need to flip these resistance and support levels in order to change the negative trend. 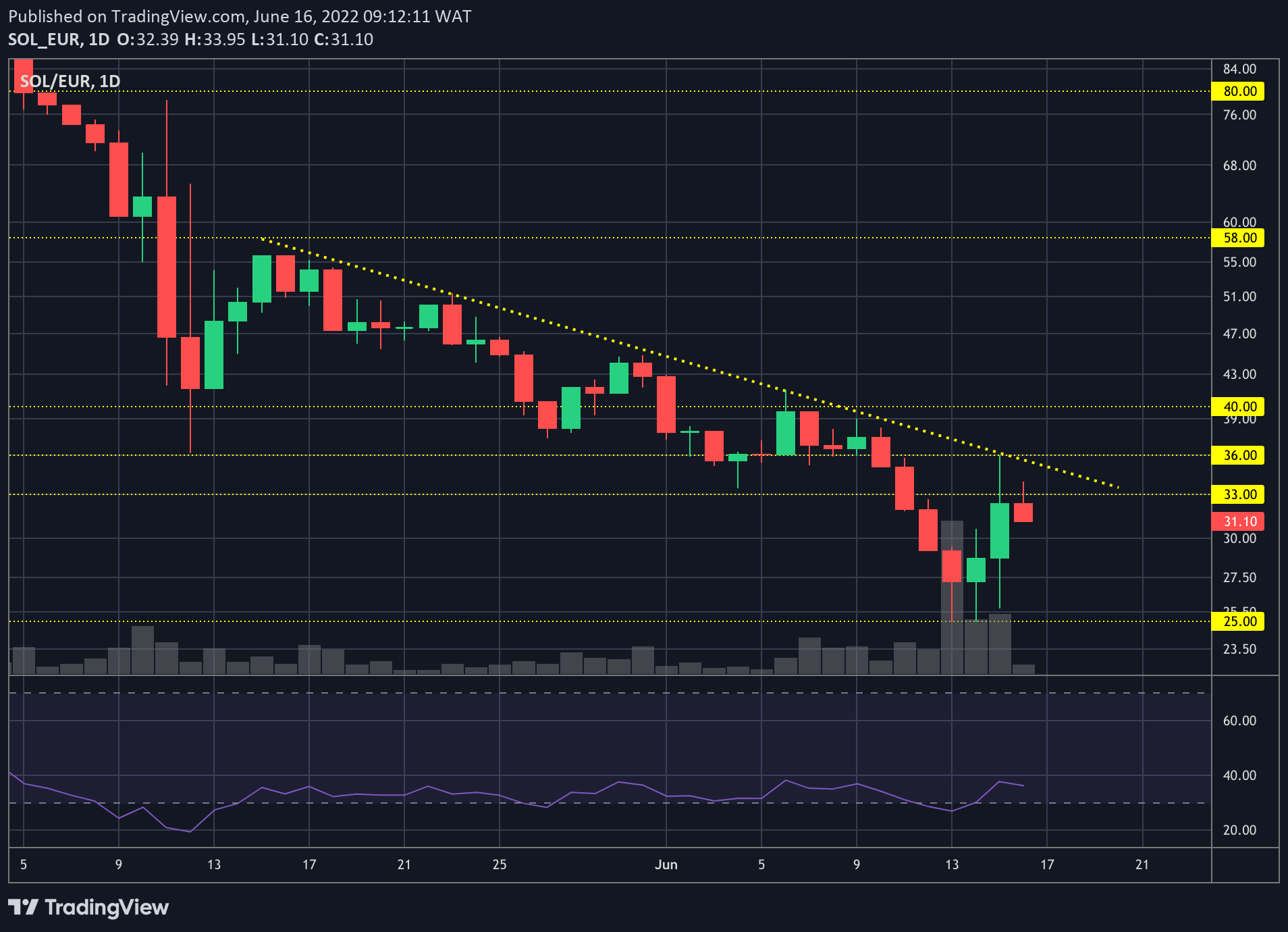 Tron (TRX) was among the biggest losers as it dropped some 25% alone on June 15 after the project’s stablecoin USDD lost its peg to the dollar. USDD uses an algorithmic mechanism to keep its dollar parity by burning its TRX cryptocurrency, a system similar to the Terra stablecoin that collapsed last month. USDD has reserves in TRON (TRX), Tether (USDT), USD Coin (USDC), and Bitcoin (BTC). 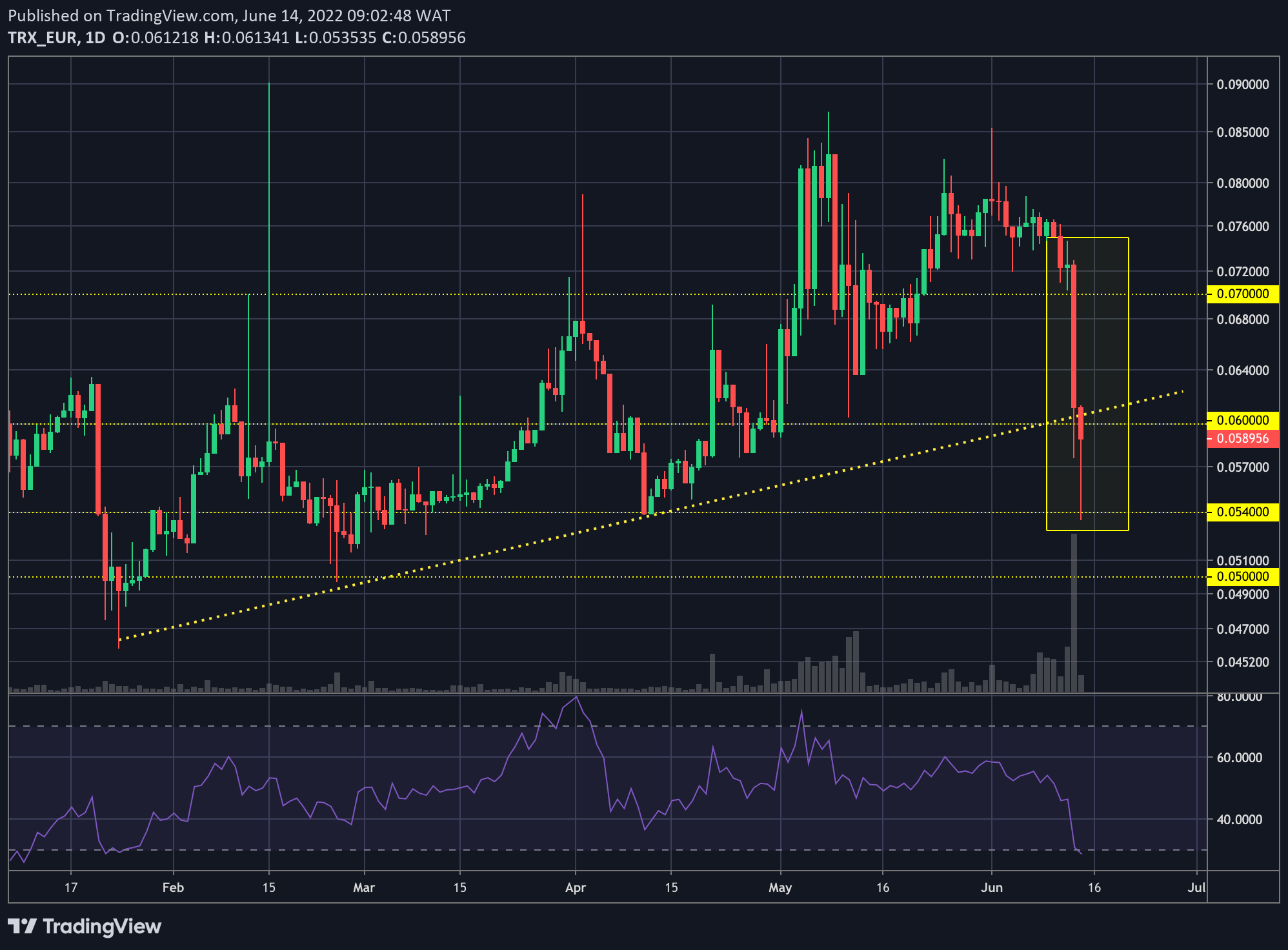 The price touched the €0.45 level, its lowest since December 2021, but quickly rebounded back to a dynamic resistance line of €0.65.