This week, the crypto market sentiment moved to an even deeper “extreme fear” zone as Bitcoin’s weekly price candle printed another negative week in a row.

Over the weekend, the Crypto Fear & Greed Index posted its second-lowest ever reading at 6/100, with Bitcoin falling sharply below the €19,150 support zone. A low was formed near the €16,765 level before the price began an upside correction.

BTC made history by crossing below its previous halving cycle’s highest price, as Bitcoin bulls are still trying to place a support level. The weekly chart printed a major break-through session for Bitcoin, ranking it among the deepest historical corrections. 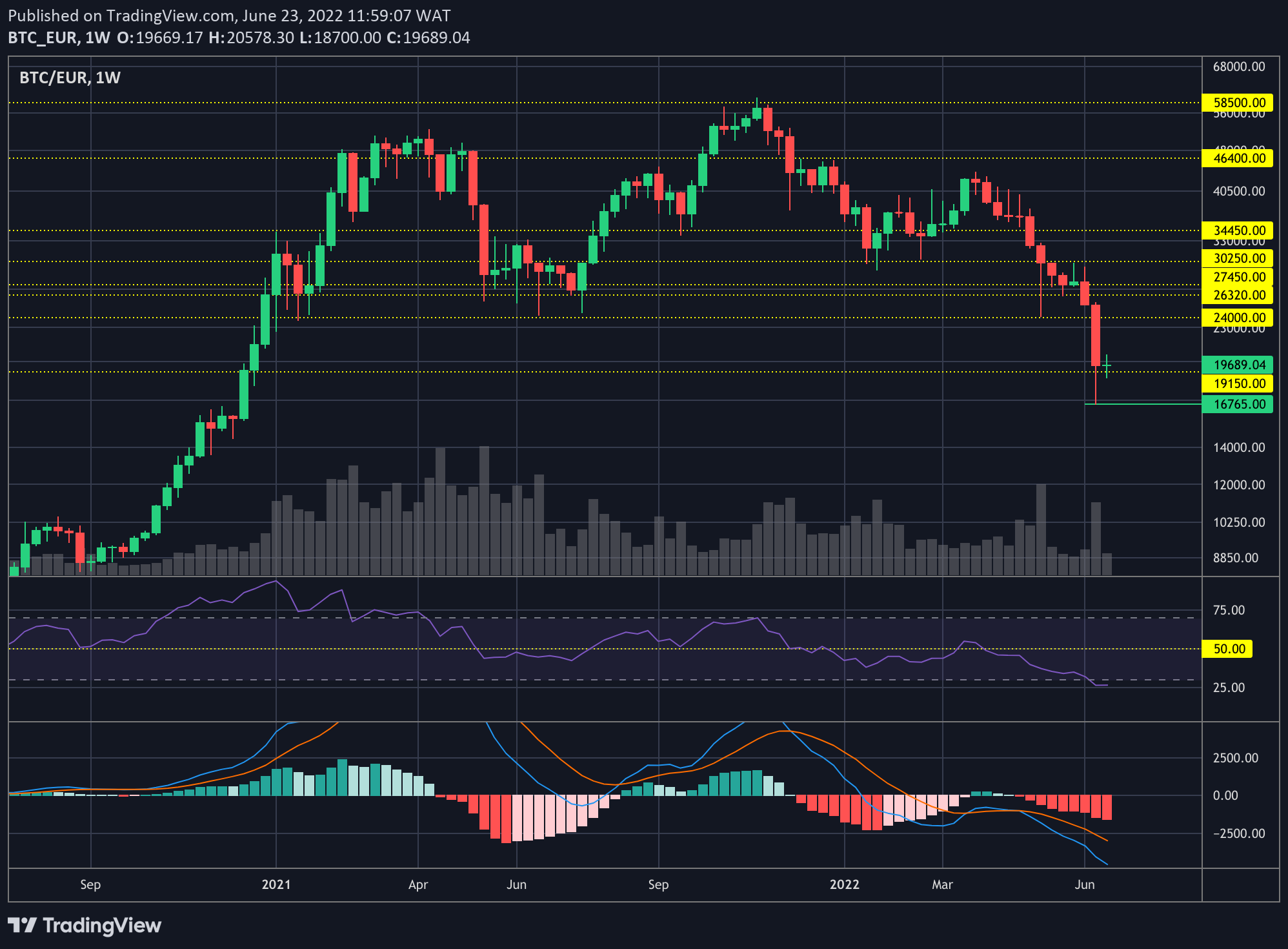 Prices on the cryptocurrencies market have been affected by a mix of bad news, growing interest rates, skyrocketing inflation and geopolitical tensions. These factors influenced activity on the trading floor, causing a major decrease in prices. Well-known crypto funds also suffered from overwhelming losses, forcing liquidations. 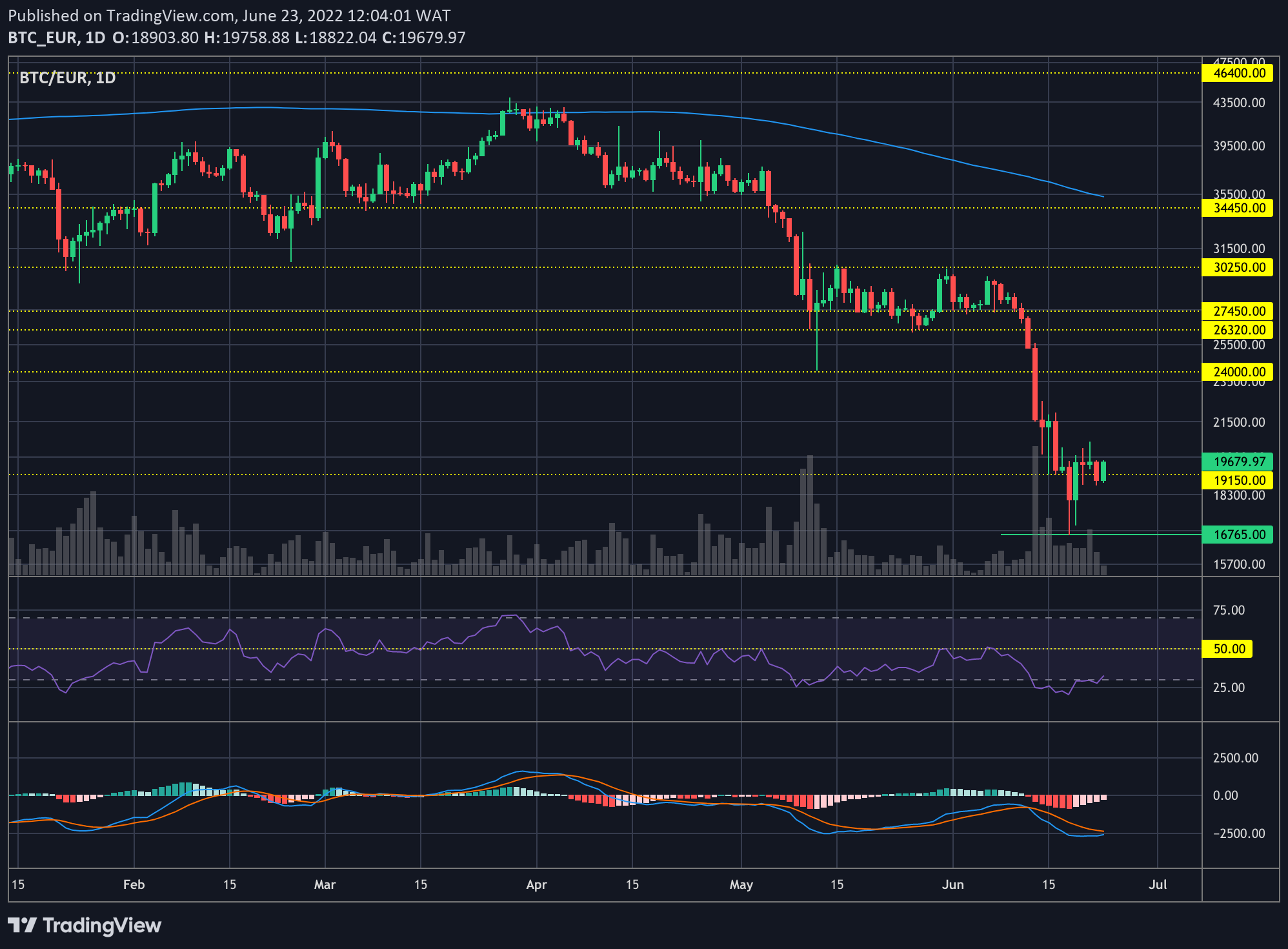 Bitcoin is down around 40% in June so far, making it the worst June in BTC’s history, while the drawdown from last November’s all-time high is approaching 80%. Historical records of bear cycles typically show 80 to 90% drawdowns off the peaks. This historical data could give some insight into the likelihood that a floor could be nearby.

Bitcoin also dipped below the 200-week simple moving average (SMA), which was a long-term support line historically. While it slipped below this average a couple of times before, it has rarely stayed under for a long time.

Ethereum’s price plummeted dramatically and fell under the €950 support level and a low formed just above the €800 level. Daily candle wicks show a great amount of volatility as the price is trying to stabilise around the €950 level, the lowest from January 2021. Ethereum is down some 80% from the top formed in December last year. 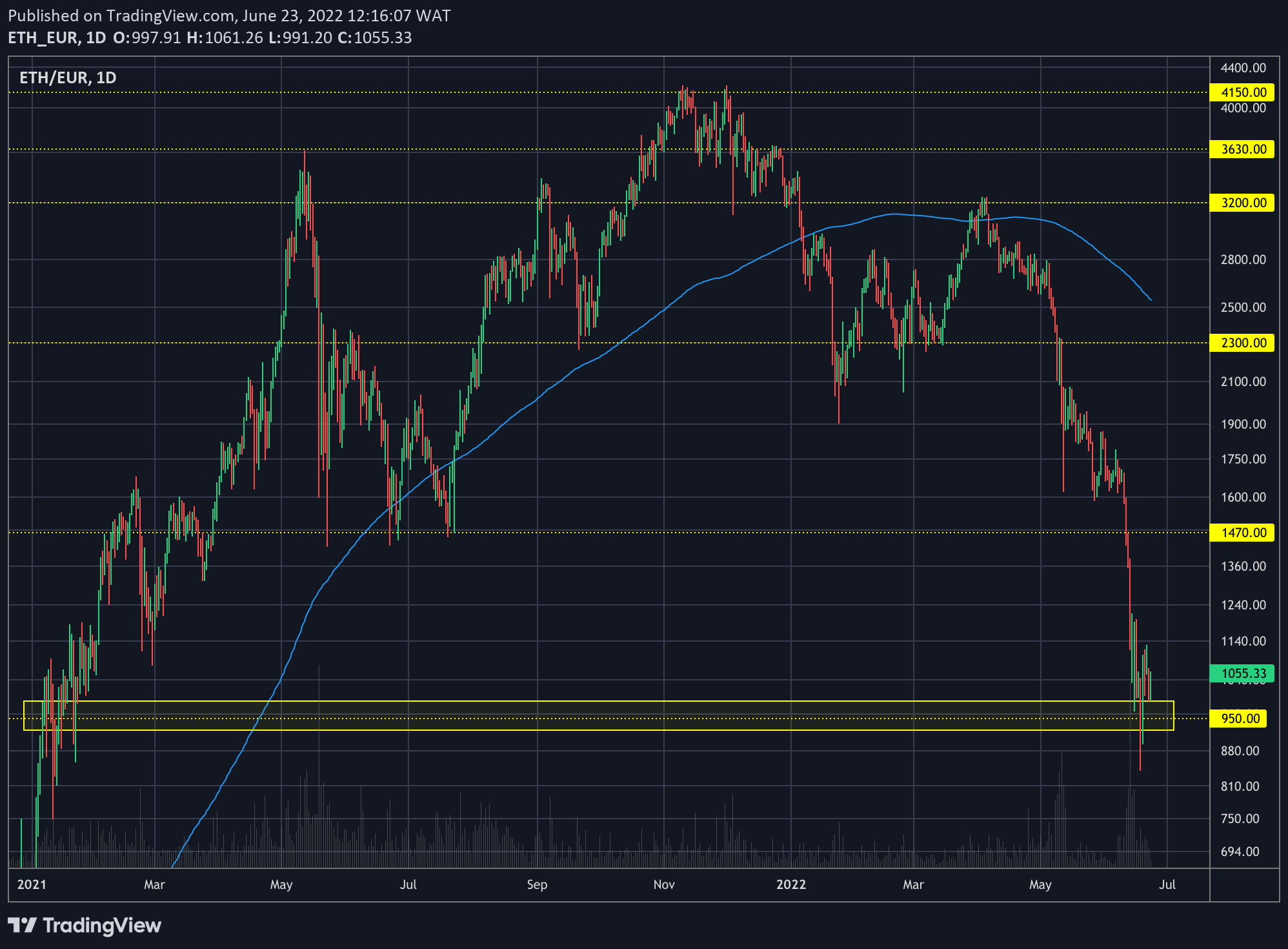 SOL has bounced back after hitting a low at €25 and is now trading close to the €36 mark. In a bullish move, the price also passed a descending trendline, which is considered very positive for the bulls. The trendline now acts as a support. 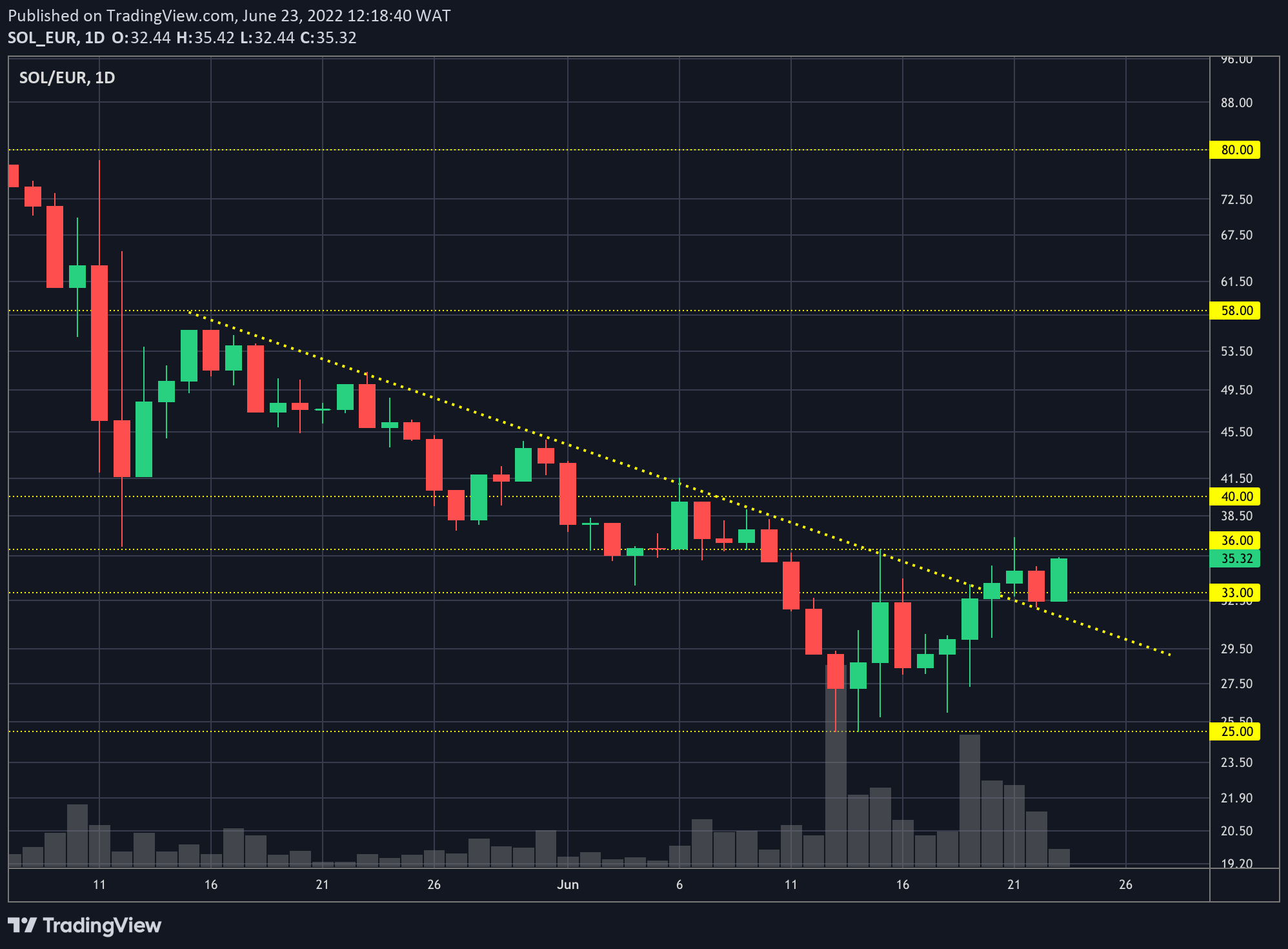 DOT bounced some 25% in the last 7 days as the wider cryptocurrency market enjoyed significant gains. The price is trading inside of a wedge pattern. A breakout from the upper resistance level could push DOT higher, while a breakdown could imply the continuation of the bearish trend. Wicks on daily charts show that buyers are strongly defending the €6 level, which is a strong support level for now. 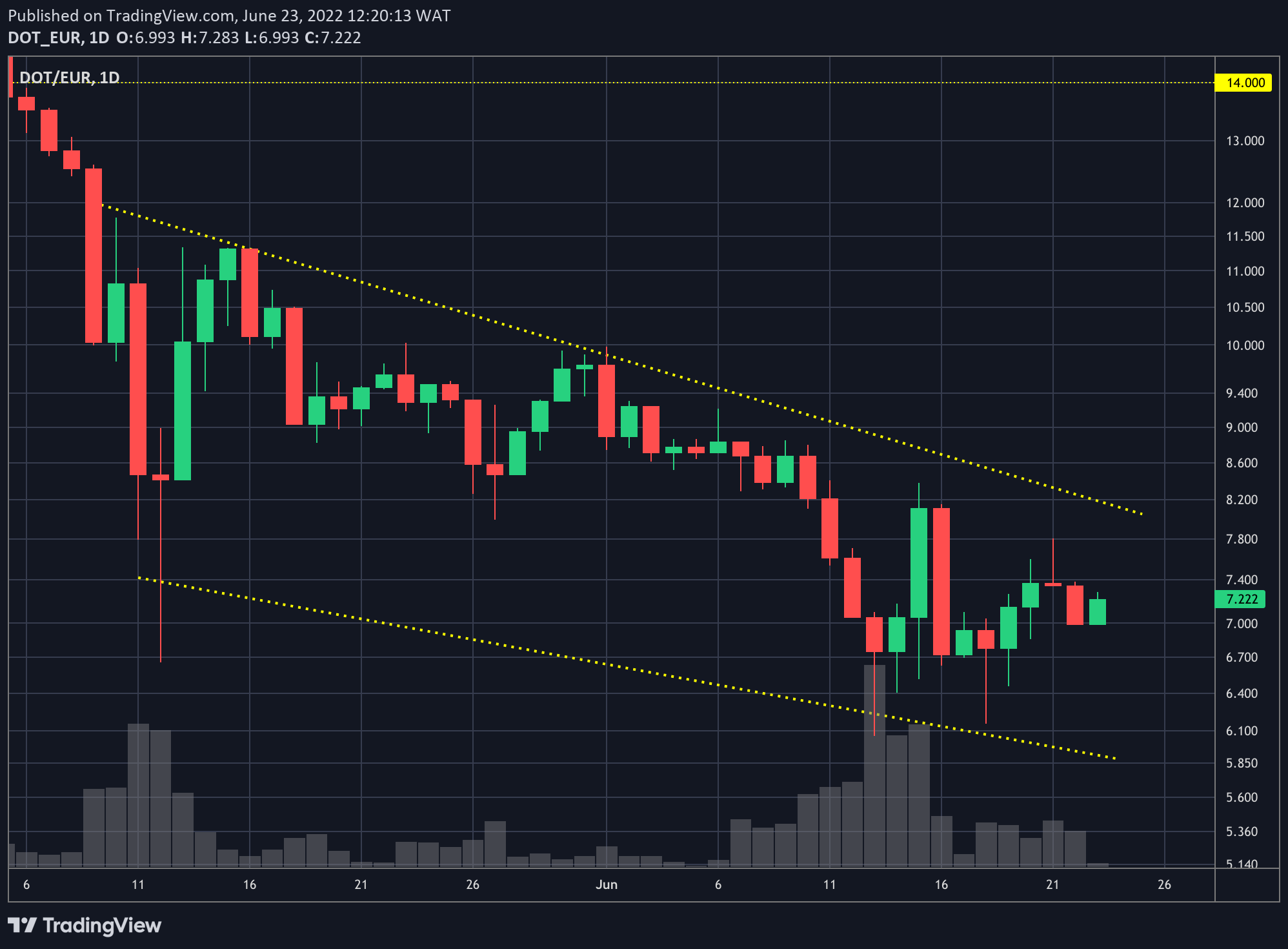 The BEST/BTC pair continues to trade inside of a triangle pattern. Bulls have managed to hold the support level at approximately the 0.000017 level. Large wicks indicate very volatile trading sessions, but for now the pattern remains unbroken. 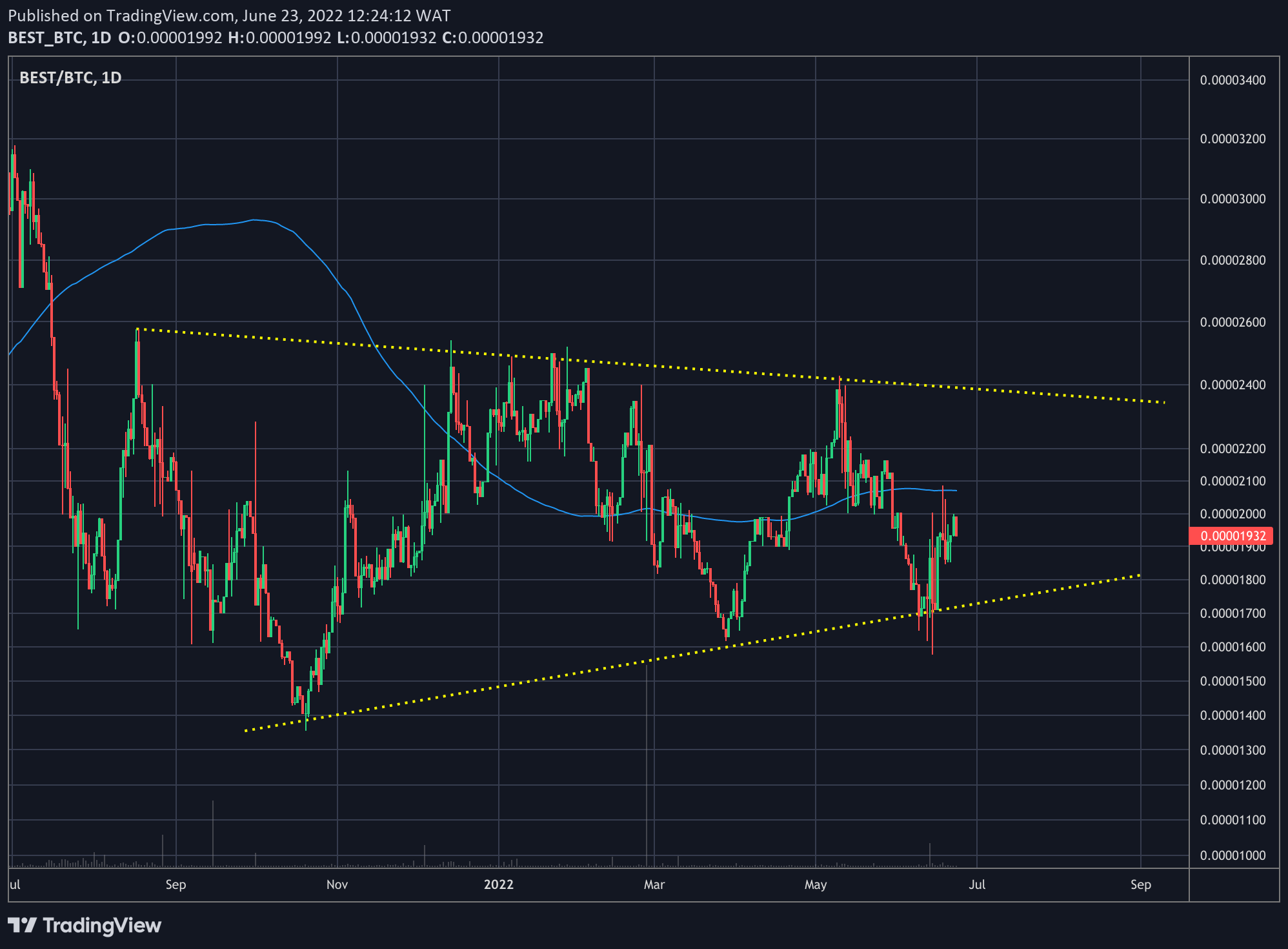 ApeCoin was hit hard during last week’s crypto crash. The token lost some 85% from the top it had reached in mid-April and is now trading inside of a falling wedge. The bulls pushed the price to the upper resistance level but were unable to flip the trend for now. 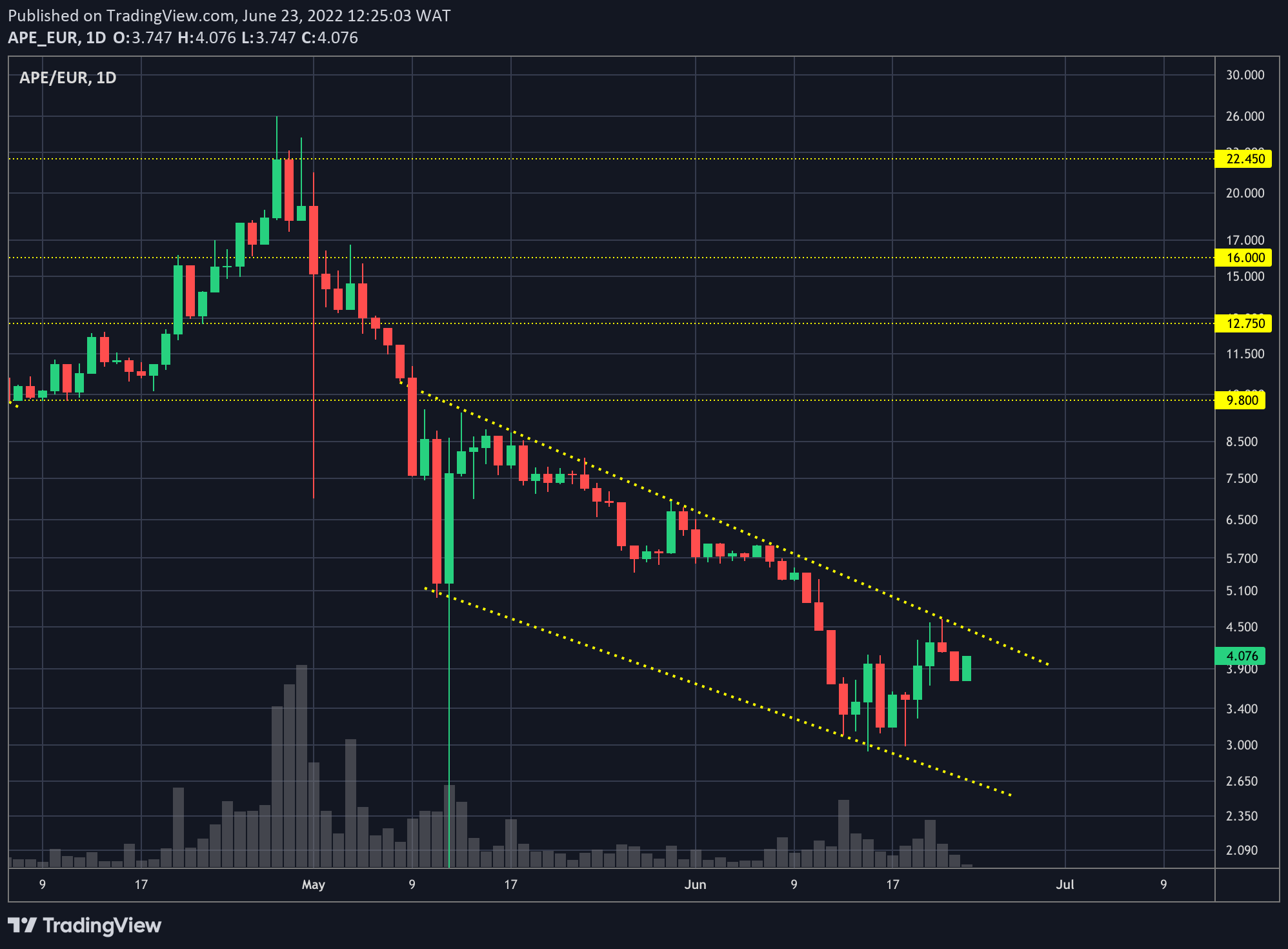 The market crash led to a sharp decline in APE market value. ApeCoin still remains a top 50 digital asset by market cap, even though it lost around €2.5 billion just in May. 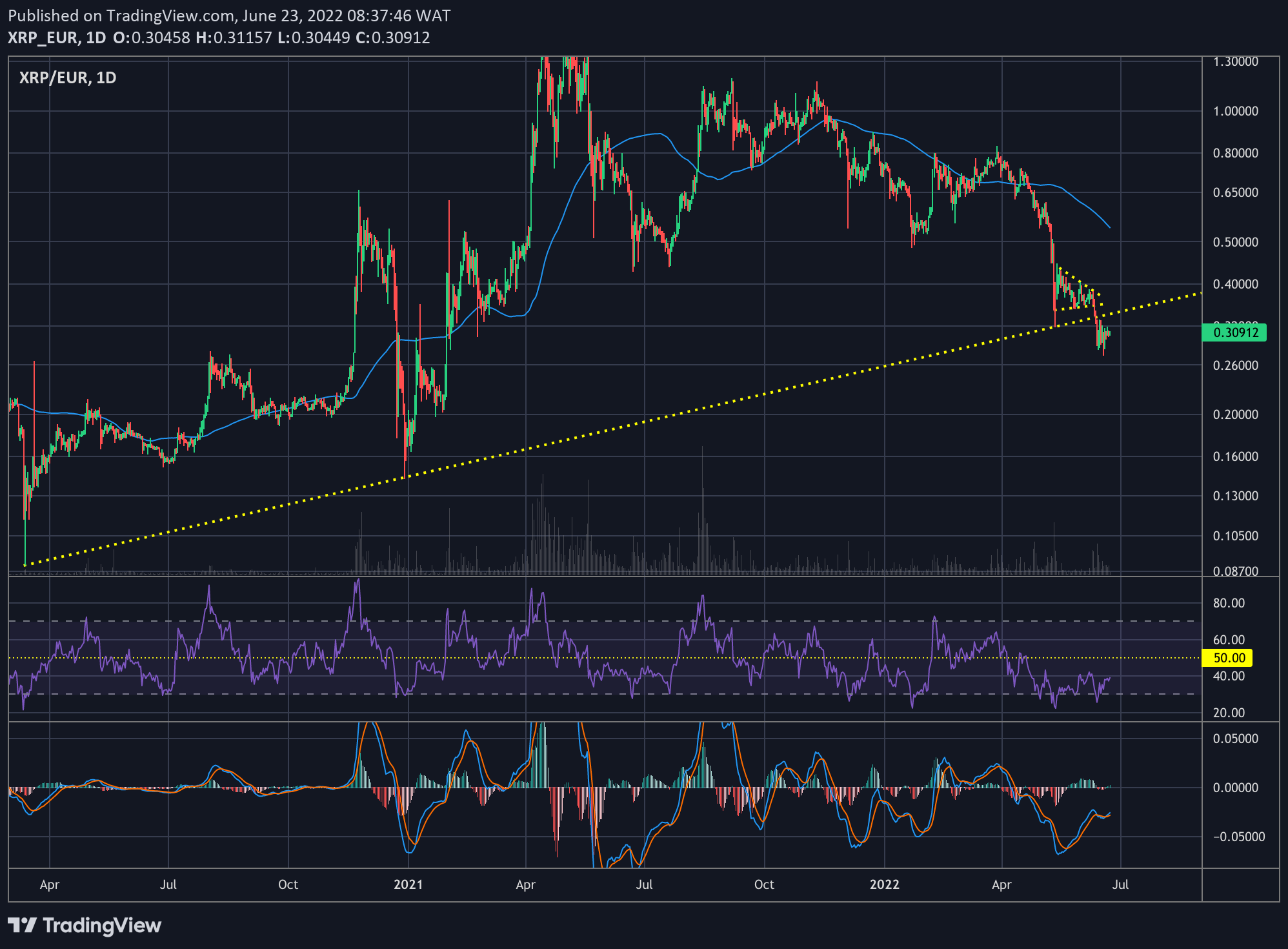 DOGE started recovery along with the broader crypto market and reached the 20-day EMA. Bulls are trying to push the price up to a descending trendline (the first major resistance level) at around €0.07. 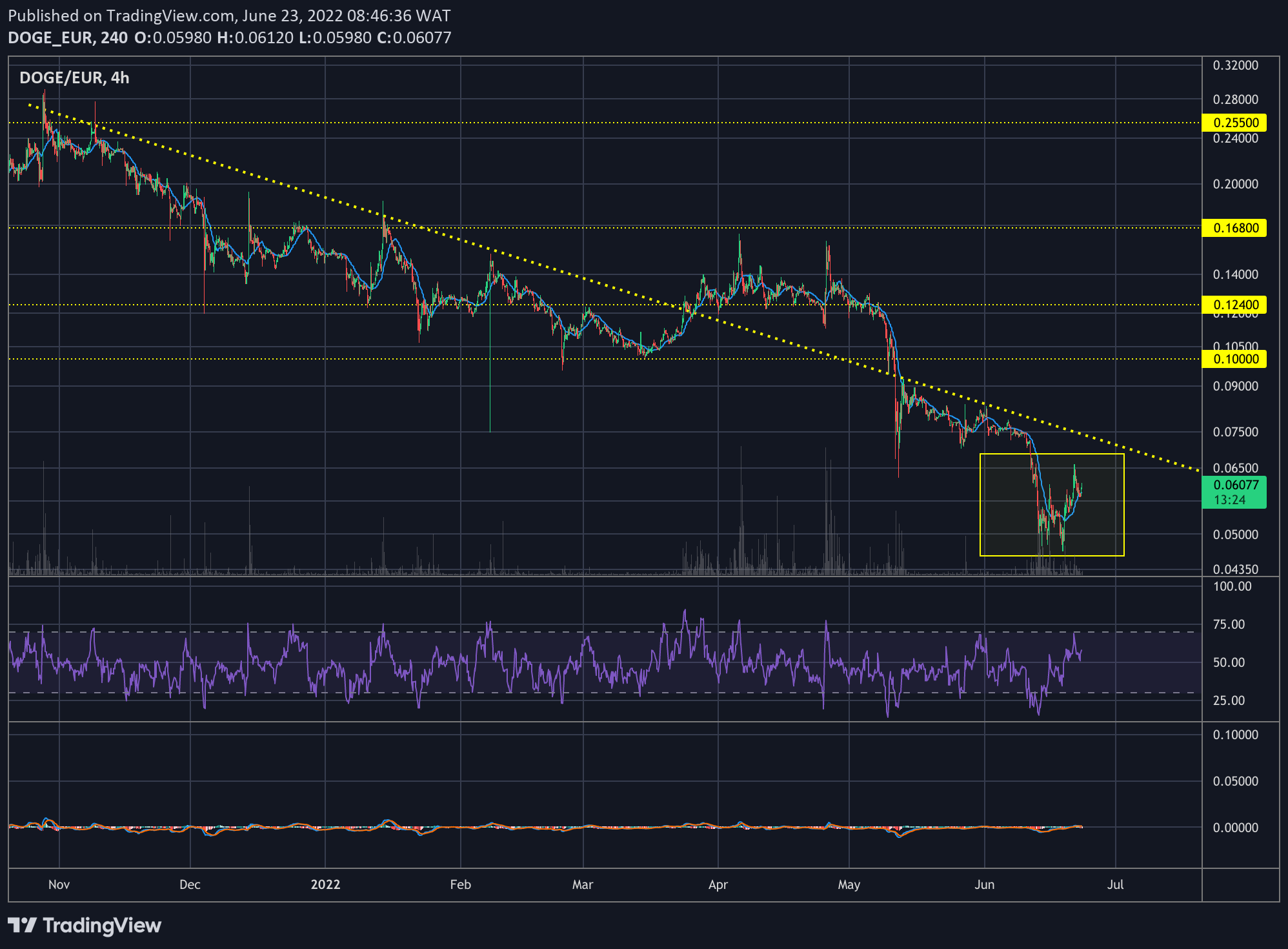