Highlights of the week

The digital asset markets were trading in the red for most of the week until the U.S. Federal Reserve's annual meeting on Wednesday. In line with many analysts' expectations, the Fed announced the fourth interest rate hike of 2022, raising interest rates by 75 basis points and bringing the target range for the federal funds rate to 2.25-2.50%. Crypto markets reacted positively to the news as Bitcoin surged around 10% in bullish daily moves after the announcement and was able to clear the €22,000 resistance level, with the price now progressing towards €24,000. Most major altcoins followed the bullish move and almost completely erased weekly losses. The total industry market cap is currently hovering just above the €1 trillion mark. 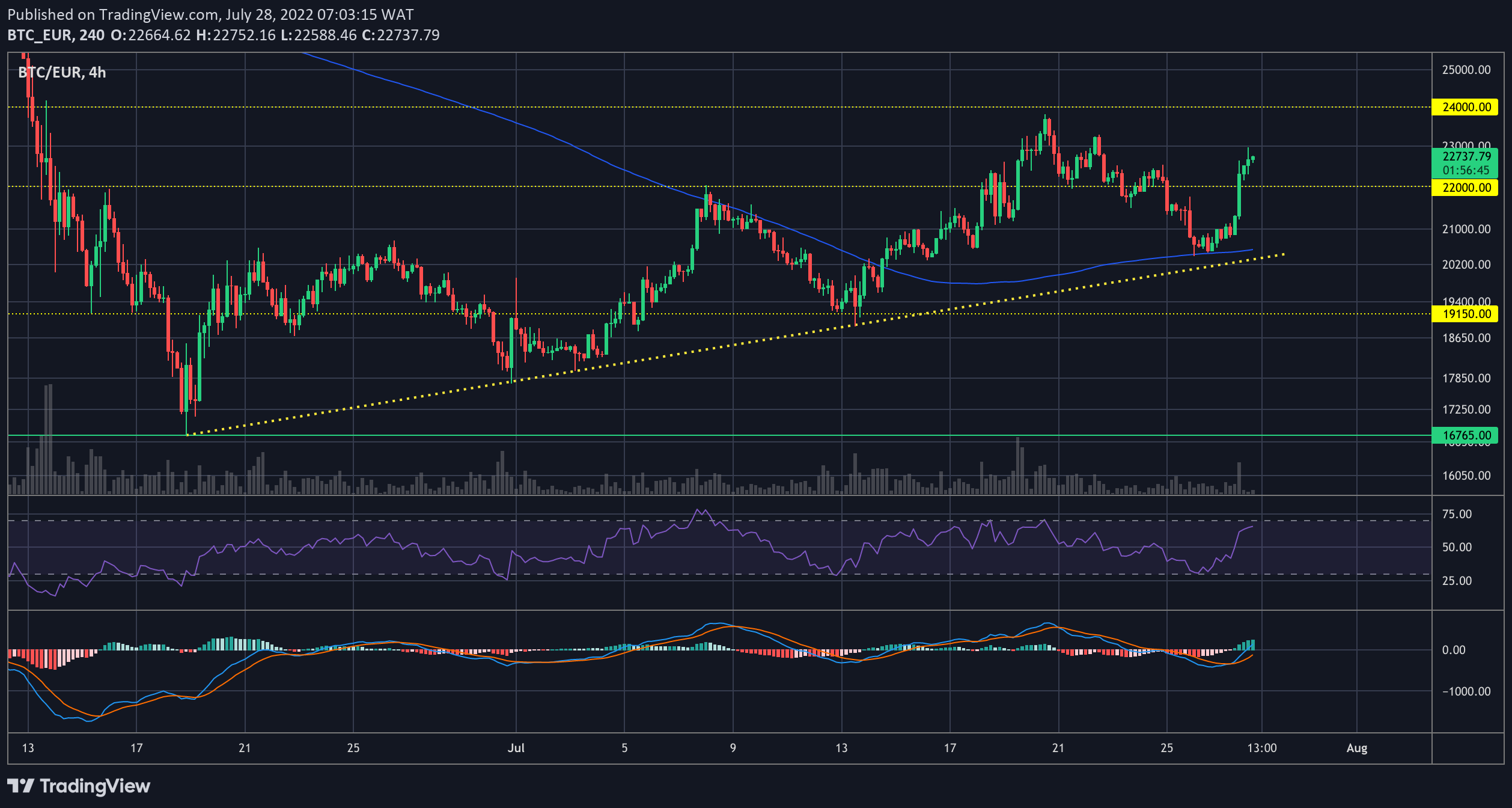 Despite its highest weekly close since the start of June, Bitcoin failed to hold the 200-week moving average, which is one of the most important indicators of a bear market. Recently the leading cryptocurrency has only teased crossing this line and has been unable to surpass it as the weekly chart added yet another candle closed under. Throughout its price history, the 200-week MA has acted as the price bottom for Bitcoin numerous times and the price did not close below this MA for a sustained period of time. So far, BTC has reached five weekly closes below this MA - which is the longest period in crypto history. 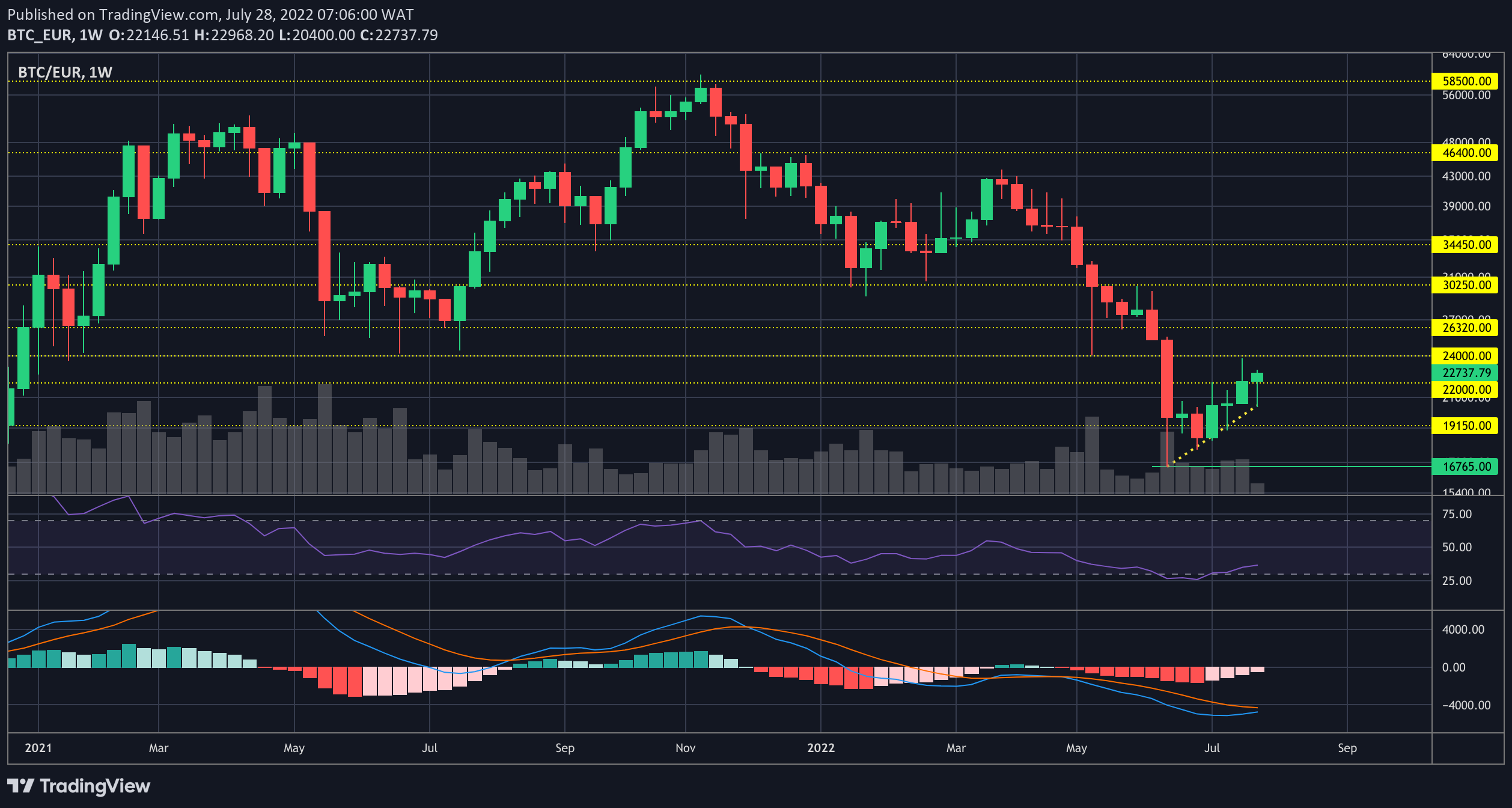 With a successful weekly close through the resistance, the next major price objective may be around €30,000.

Market sentiment has improved since last week as the Crypto Fear & Greed index rose to 32 points, up from 28 last week. Now in the fear region, the Index broke the extreme fear barrier this week by spiking at 34 points and eventually settling at 32 points as the market spurred increased optimism among investors. The fear saga continues, but the market sentiment has definitely improved from the June lows. Nonetheless, there is clearly still nervousness in the market.

Over the past seven days, most major altcoins saw double digit price declines until the mid-week bullish performance. Ethereum outperformed Bitcoin, with the ETH/BTC pair rising some 33%, meaning investors are flipping Bitcoin for altcoins and Ethereum as crypto sentiment rises. 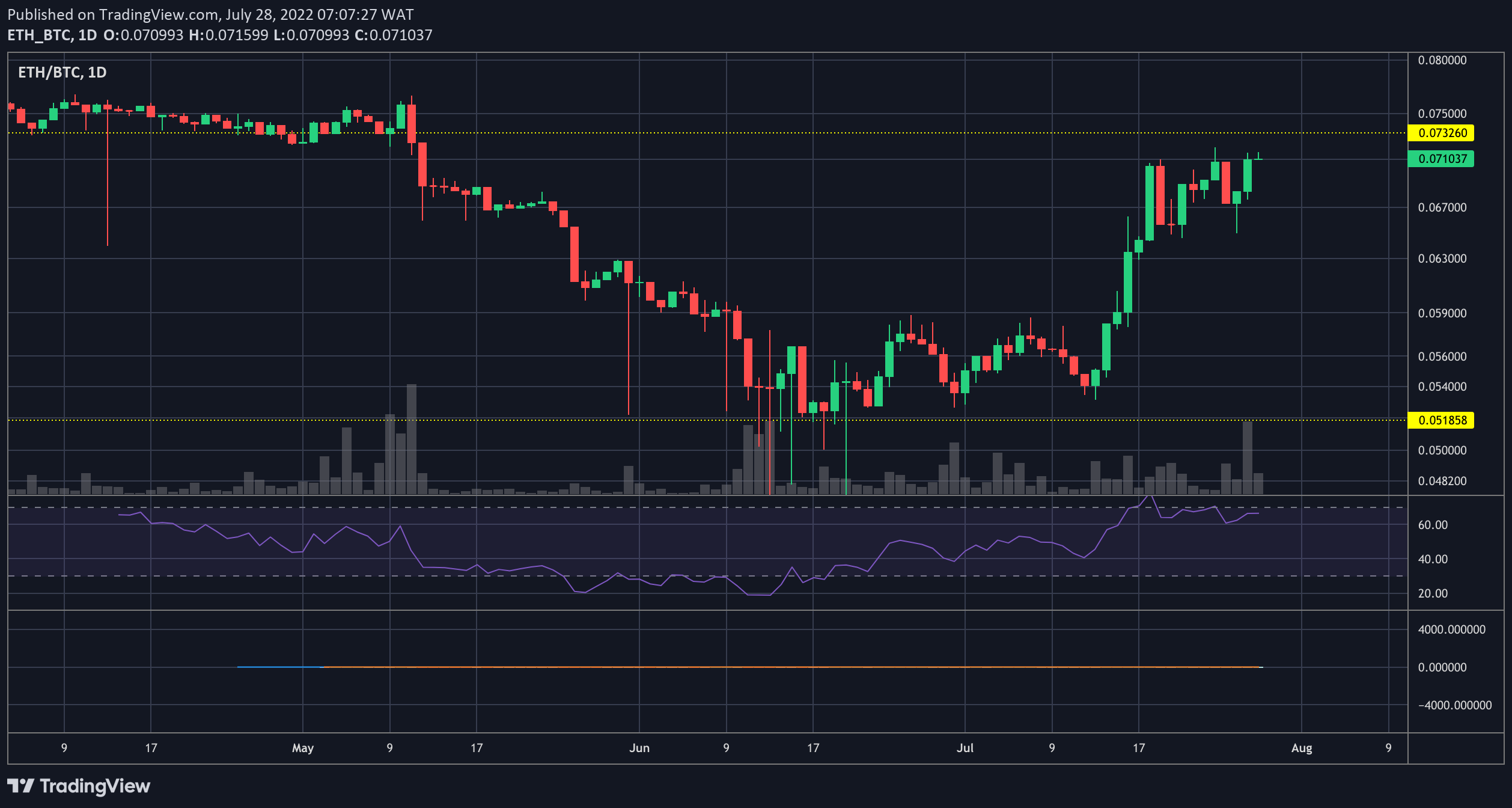 Ethereum's strength relative to Bitcoin has caused its market dominance to rise from 14% to 19% on June 13. On the other hand, Bitcoin has seen its market share decrease by some 1% to 42.5%.

ETH surged 20% in 24 hours after the Fed interest rate announcement and even surpassed the €1,600 level, the highest since the beginning of June. The price is trading above the 100 hourly simple moving average and could continue to rise if there is a clear move above the €1,650 resistance level. Since bottoming out in the middle of June, the price of Ethereum has appreciated by some 80%. 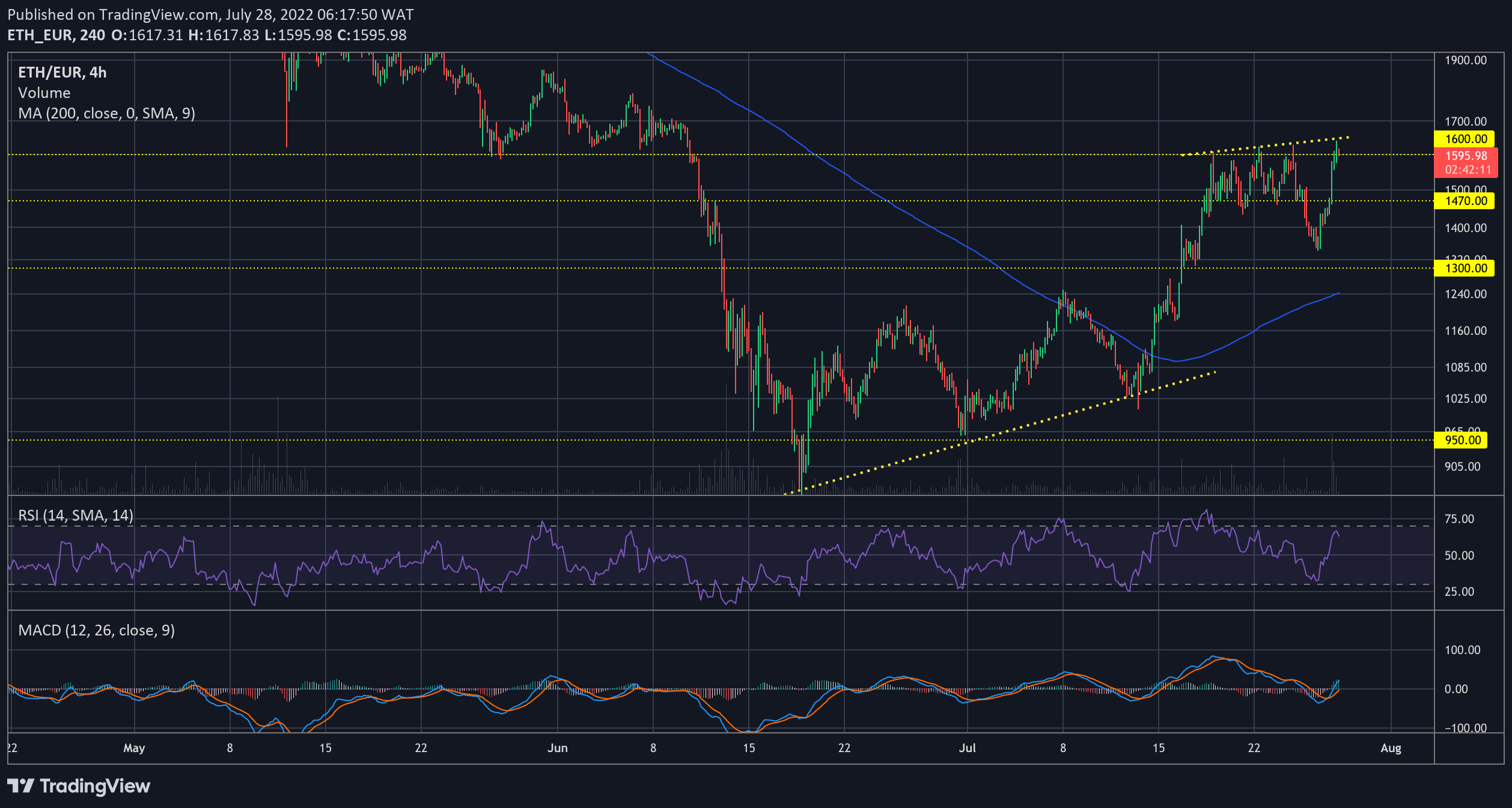 XRP’s price declined to the dynamic trendline, which is holding strong at the €0.32 support zone. RSI surged back into bullish territory after the Fed announcement, indicating that the bulls are not giving up their positions. 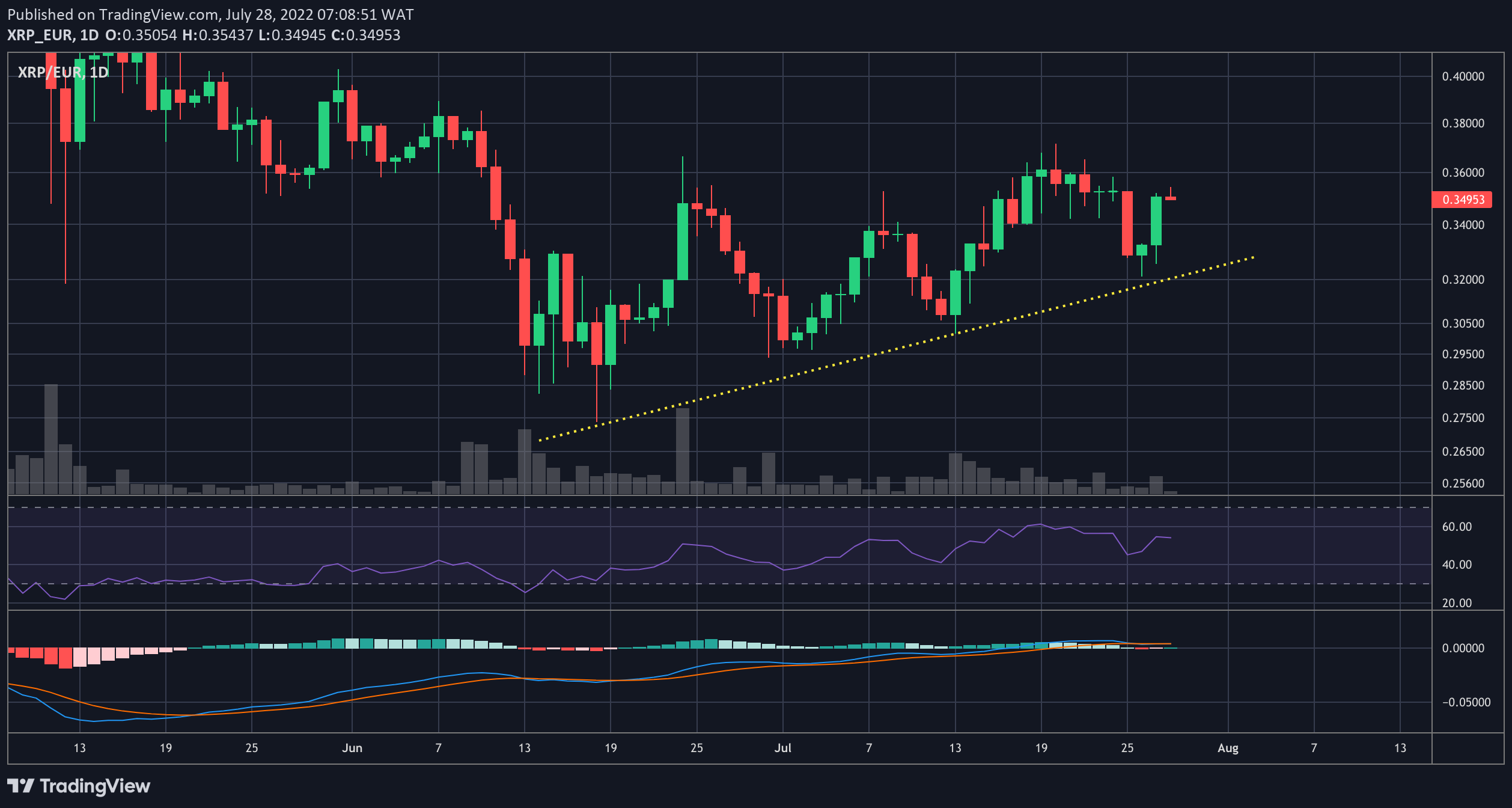 Ripple has signed a partnership with FOMO Pay, one of the leading payment institutions in Singapore. FOMO Pay will improve its treasury payments by leveraging Ripple’s On-Demand Liquidity (ODL) technology and gaining constant access to liquidity for the euro and the U.S. dollar.

SOL printed a bearish daily candle with a large overhead wick on Monday’s daily chart. The bears took control and pushed the price down to the dynamic trendline. The price gained pace below the €40 support zone but the bulls are now trying to reverse the trend. 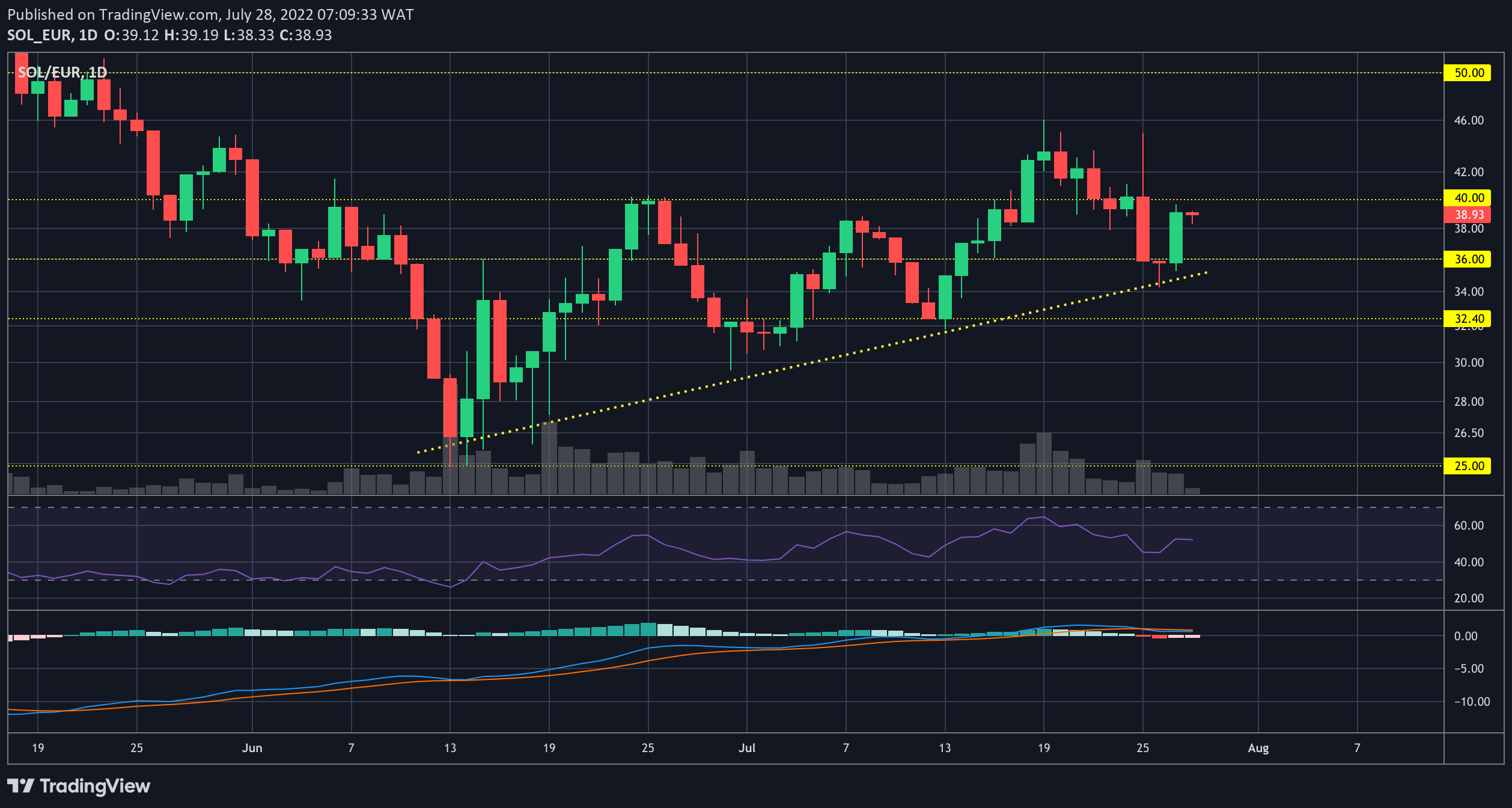 Solana’s price has managed to stay above trendline support for now and is still trading in a bullish pattern. The €40 level is the next strong resistance, followed by €50.

DOGE is potentially forming a bottom but still trading under the long-term trendline. The price accelerated lower and formed a short move below the €0.06 support. The next major support is at €0.055, while a break above the descending trendline would flip the trend to bullish. 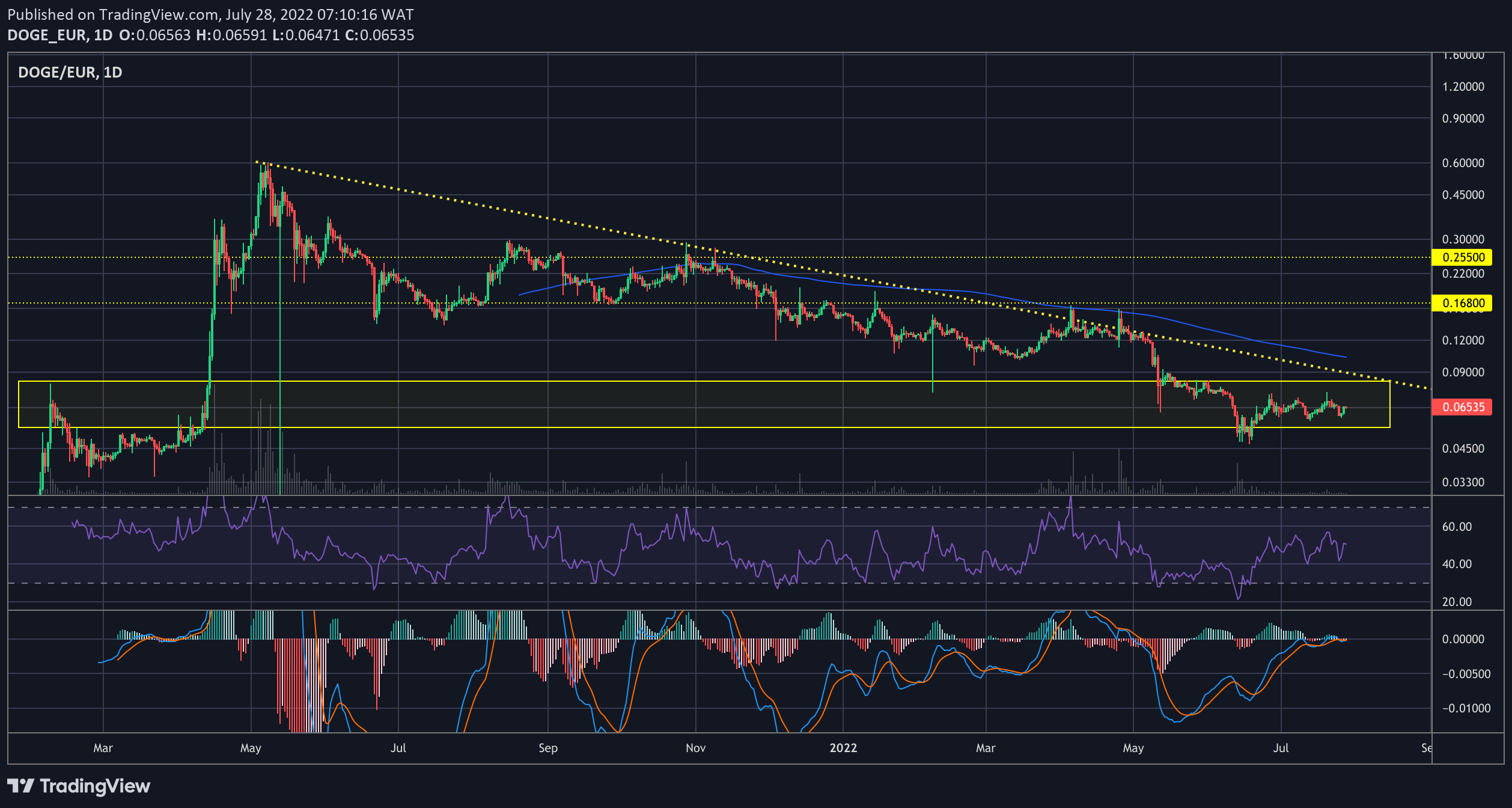