Bitcoin closed slightly bullish on the weekly chart and with candles in the green on the monthly chart, but it remains close to the 200-day moving average. While the breakout may have bullish implications, the dominant long-term trend is still downwards, while the medium-term trend is just barely curving upwards. In July the Bitcoin price ended with a massive 30% gain in the lower ends to reach €16,765, which increased positive sentiment across the board. The price has now steadily increased four weeks in a row, with the main resistance coming from the swing low support of Q321, placed just around the €27,000 – €28,000 mark. The past month saw the total cryptocurrency market add a considerable €230 billion to its total capitalisation as the majority of it was painted green. 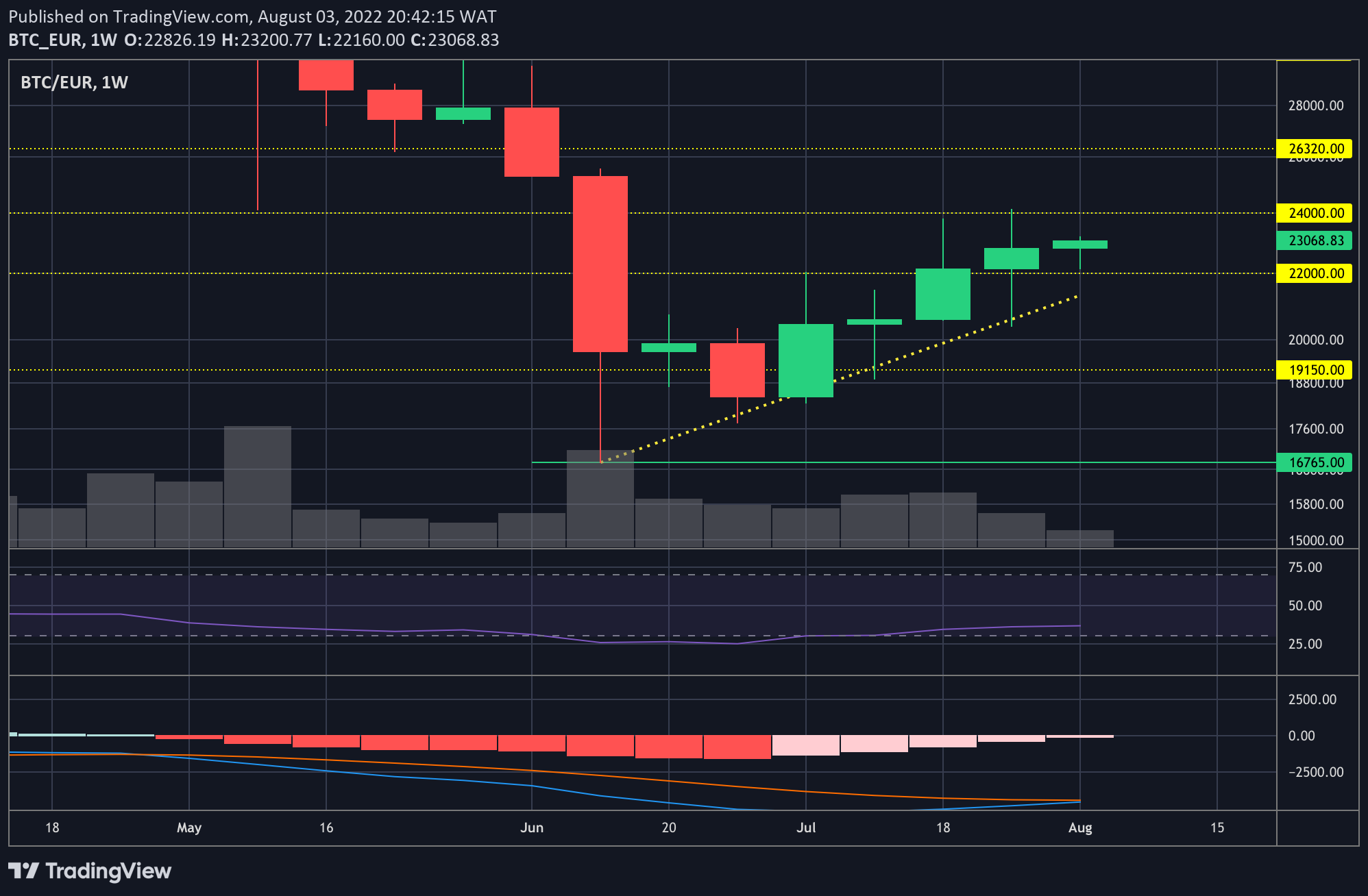 Bitcoin managed to trade around the €24,000 level during intraday sessions, but failed to progress above it. It declined to the €22,000 mark, where bulls regrouped and staged a recovery, pushing the price back towards the resistance level. 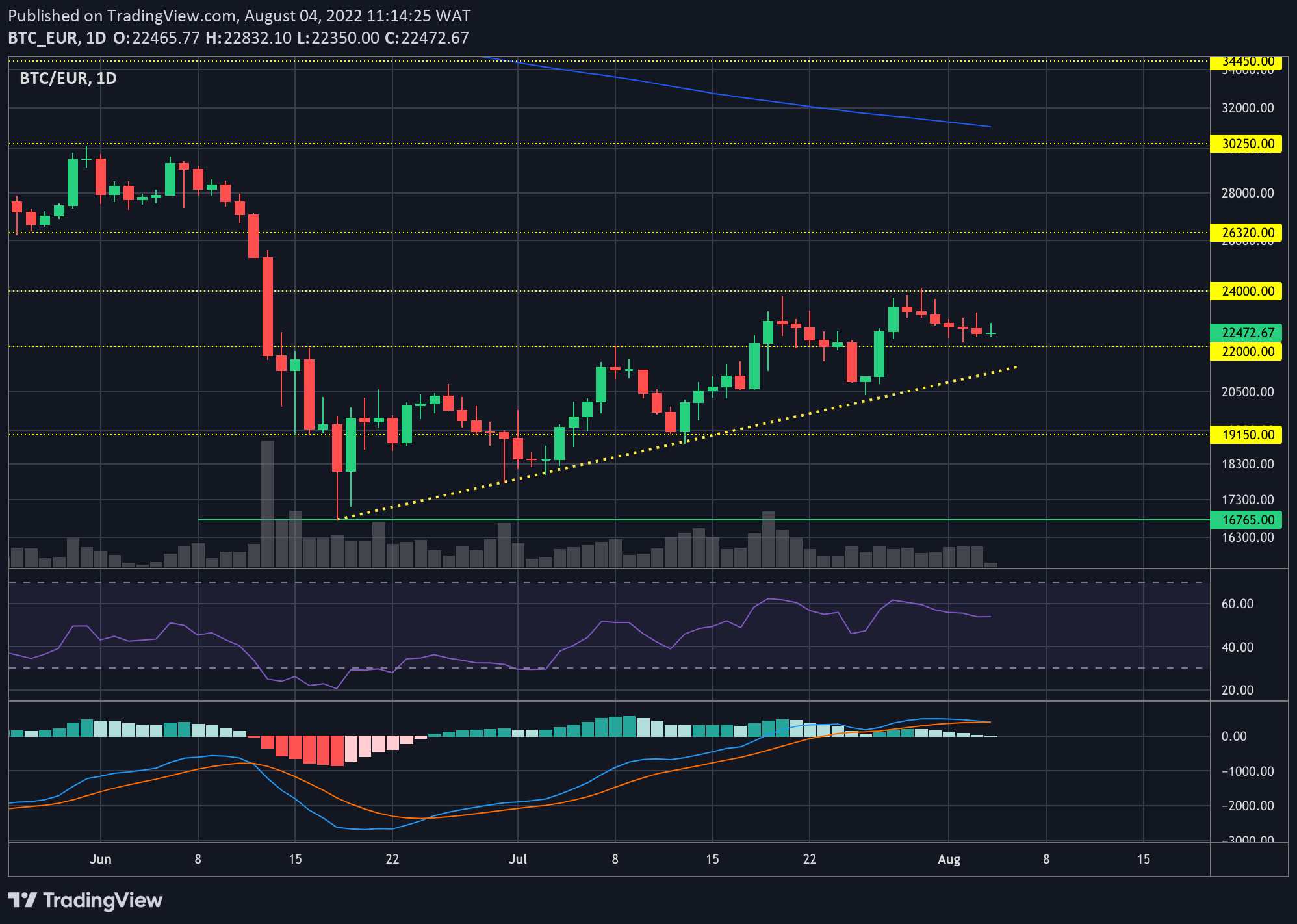 Bitcoin’s dominance, a commonly-used metric to gauge its share relative to that of the entire market, declined slightly over the past seven days and is struggling to hold on at the 42% level. Crypto sentiment is improving and investors are selling Bitcoin to buy smaller altcoins.

Ethereum closed strong and bullish in the July candle and is now consolidating around the €1,600 mark. The price is moving tightly around the resistance level, which has been in place since the start of June. Though the price remained above €1,500, it has been losing its bullish momentum in the last few days. Upper head candle wicks show some selling pressure around the €1,600 level. ETH might gain pace if there is a clear move above the €1,650 level. 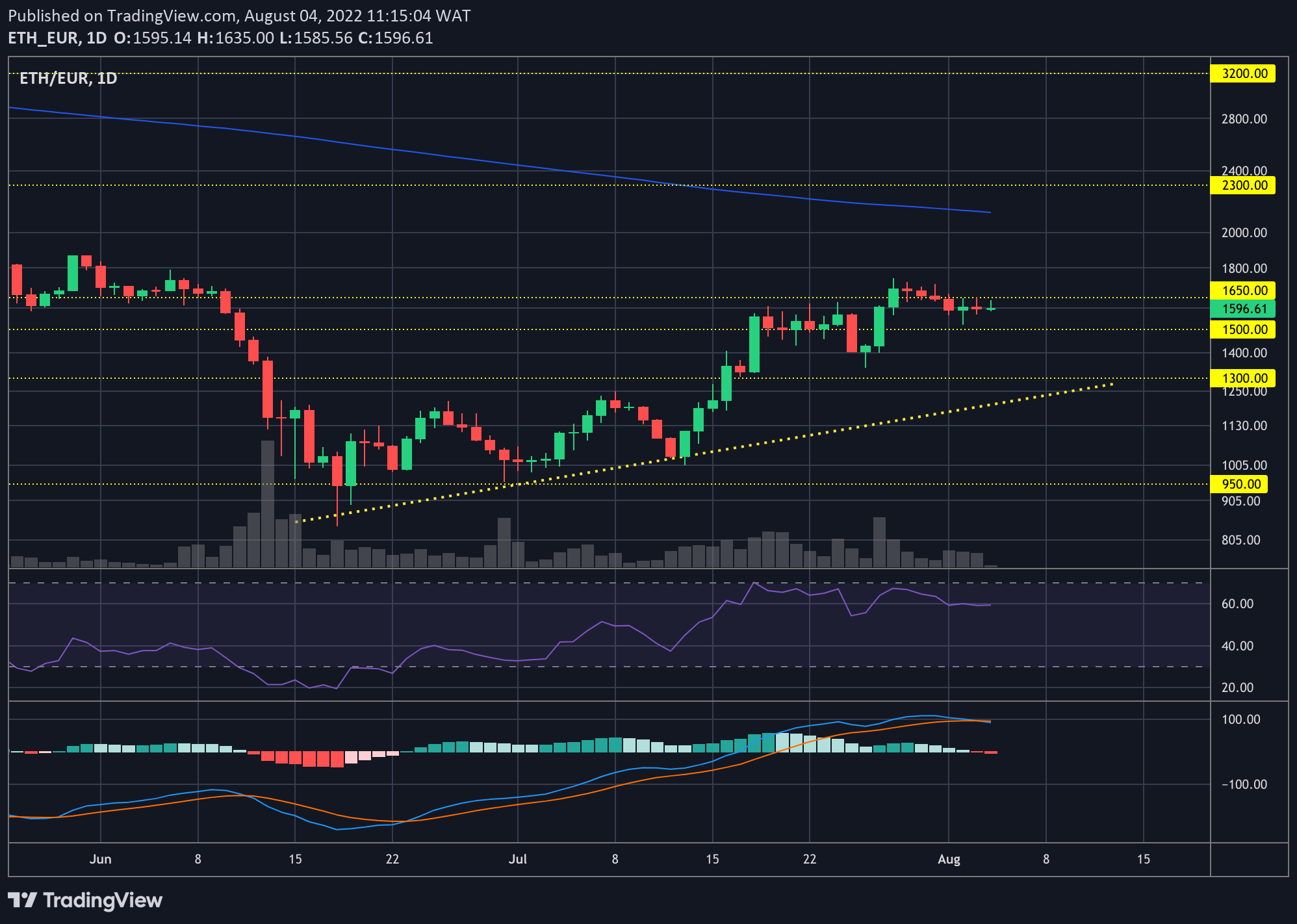 Ethereum is strong against Bitcoin and is taking part of its market share. Ethereum dominance surged to 20% on the last day in July, up from only 14% at the start of the month. Price-wise Ethereum outperformed Bitcoin and gained some 34%. The ETH/BTC pair is hovering around the 0.07 level, up from 0.05 at the start of July. 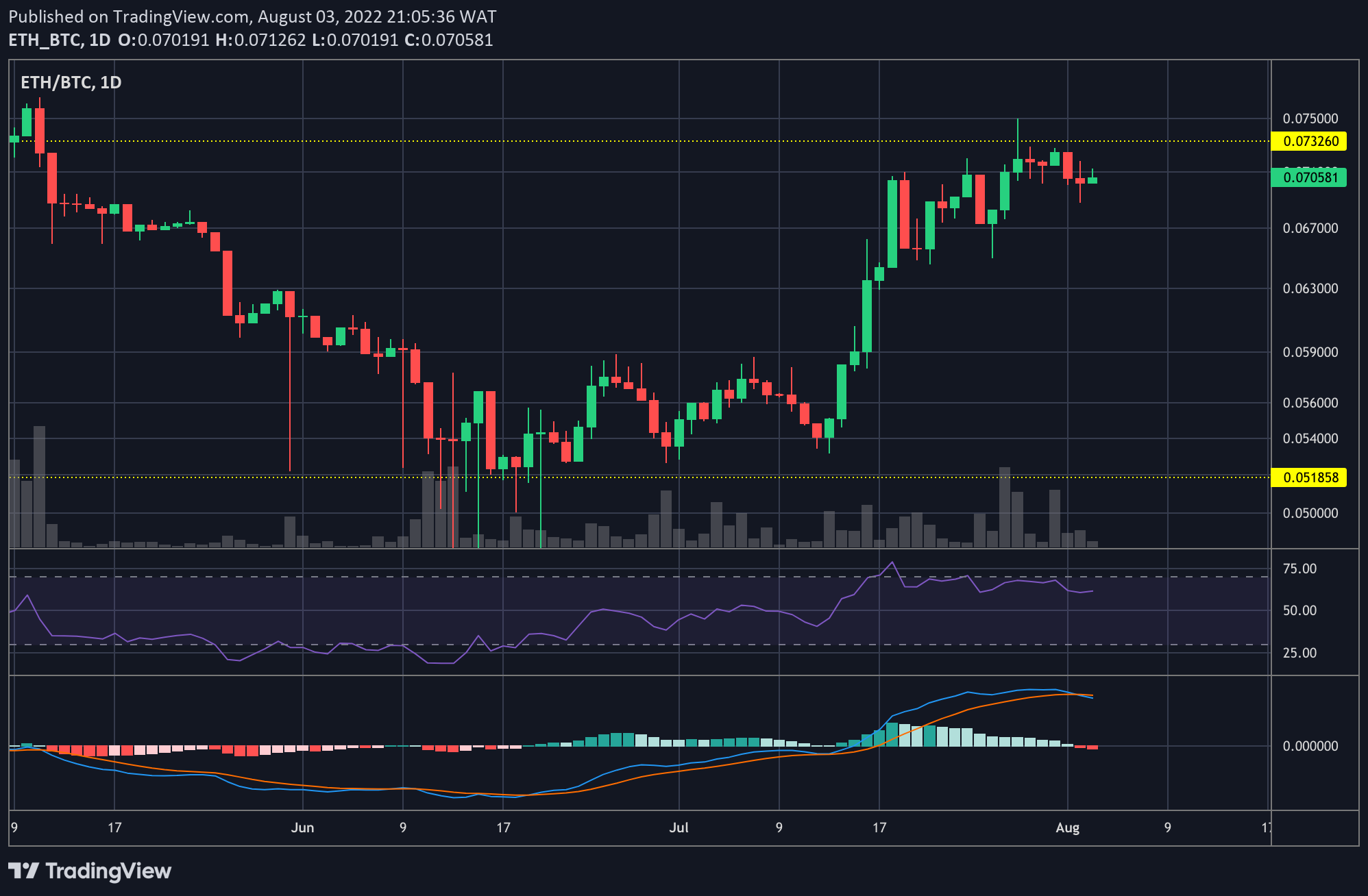 Ethereum competitor Solana has fallen below the €40 support amid an attack on the blockchain network. The price is approaching the dynamic support line with RSI and MACD in bearish territory. SOL is currently the 9th biggest crypto with a market valuation of €13.4 billion. 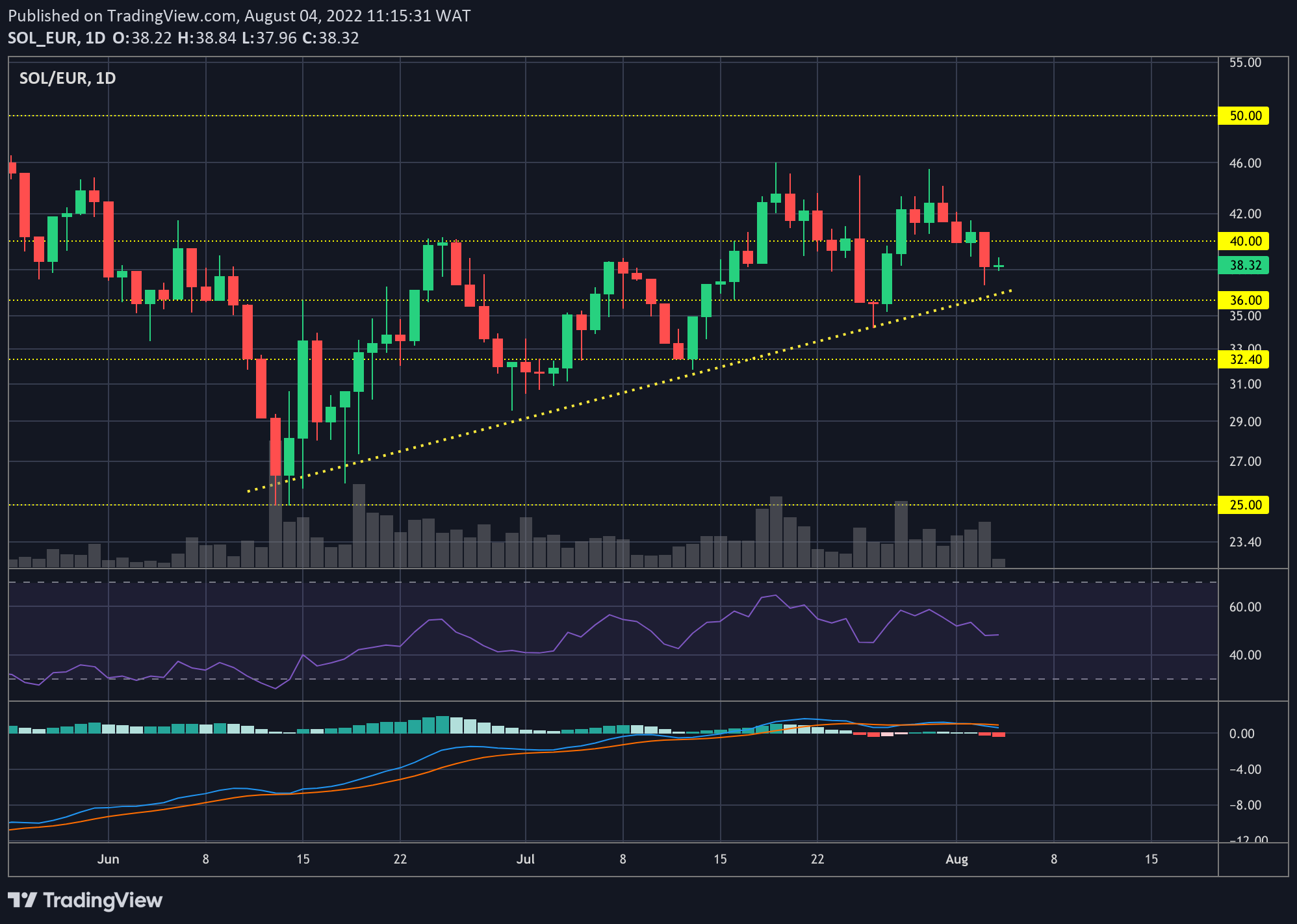 Polkadot, which is currently the 11th biggest crypto according to market cap metrics, was among the biggest gainers in the last seven days as it surged some 10% to reach its highest price since the start of June. DOT printed a massive green candle in July and gained 40%. 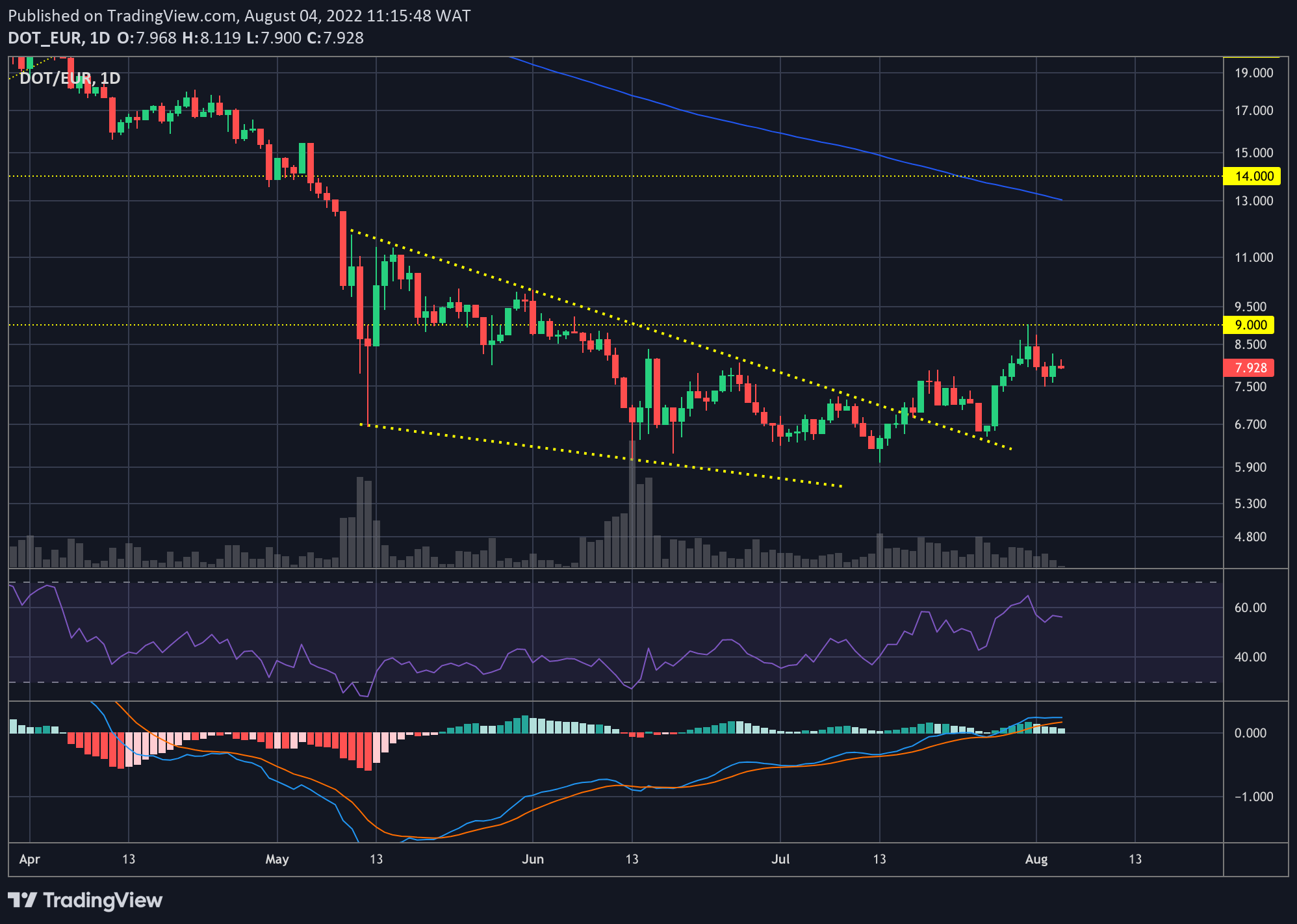 Web3 Foundation (W3F), the organisation responsible for issuing development grants on Polkadot, has passed its milestone of 400 approved projects. Since launching in December 2018, W3F disclosed that 1,054 applications for funding have been submitted, with 415 being approved. The scope of these projects varies greatly, encompassing the entire web3 stack, from the base layer to middleware and consumer applications.

The XRP price has been moving positively since mid-June, however sellers showed great resistance at the €0.40 level and pushed the price back down. Momentum is still bullish and the price could move higher once it breaks through the €0.40 level. 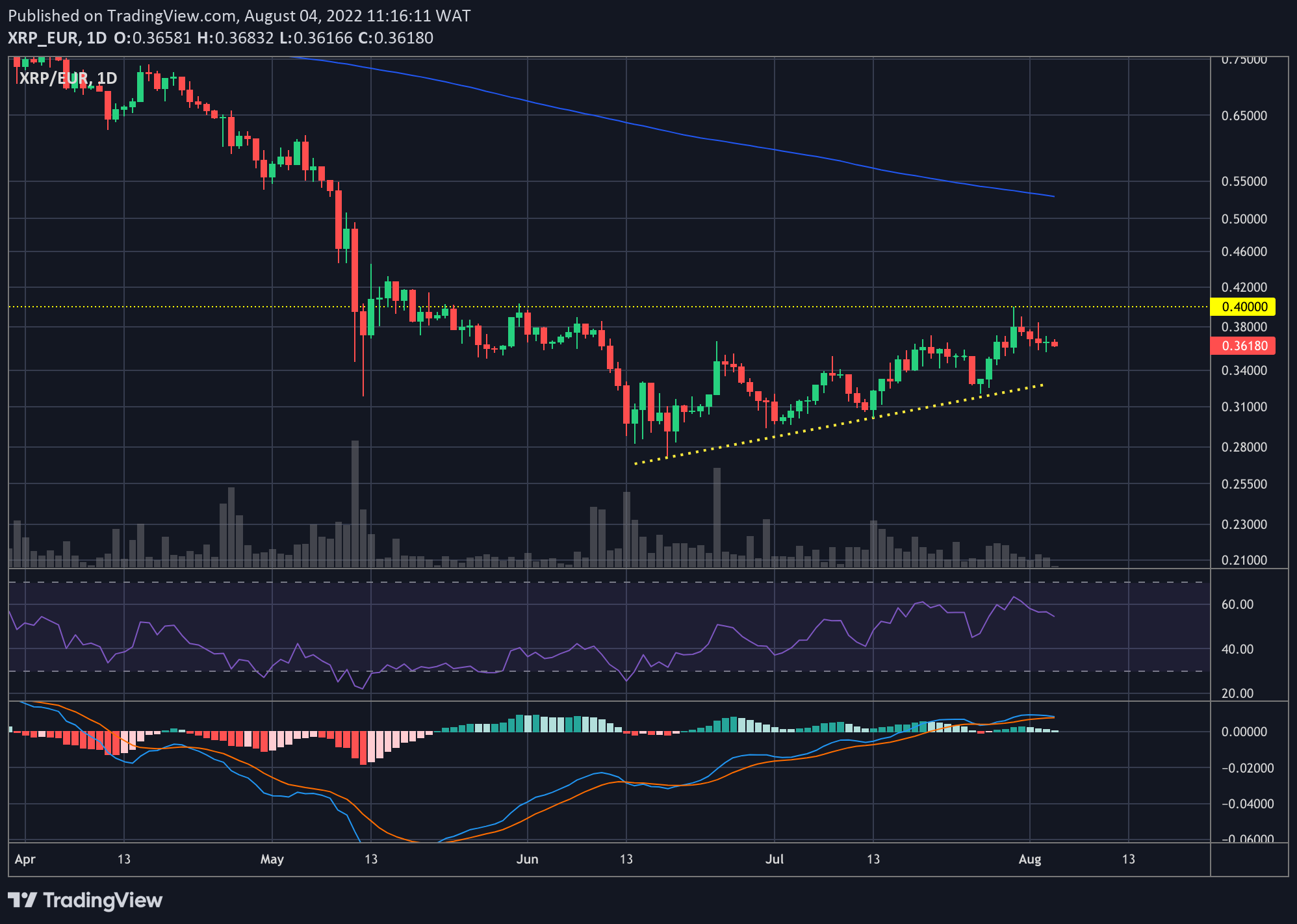 Ripple co-founder Jed McCaleb sold his remaining XRP tokens last month, which means that he will no longer be able to exert additional selling pressure on the sixth-largest cryptocurrency with a market cap of €17.6 billion.

CHZ surged some 30% in the last 48 days and has touched the 200-day moving average. Sellers are currently still showing strong hands and pressing the price below €16. Chiliz is up almost 60% in the last 7 days. 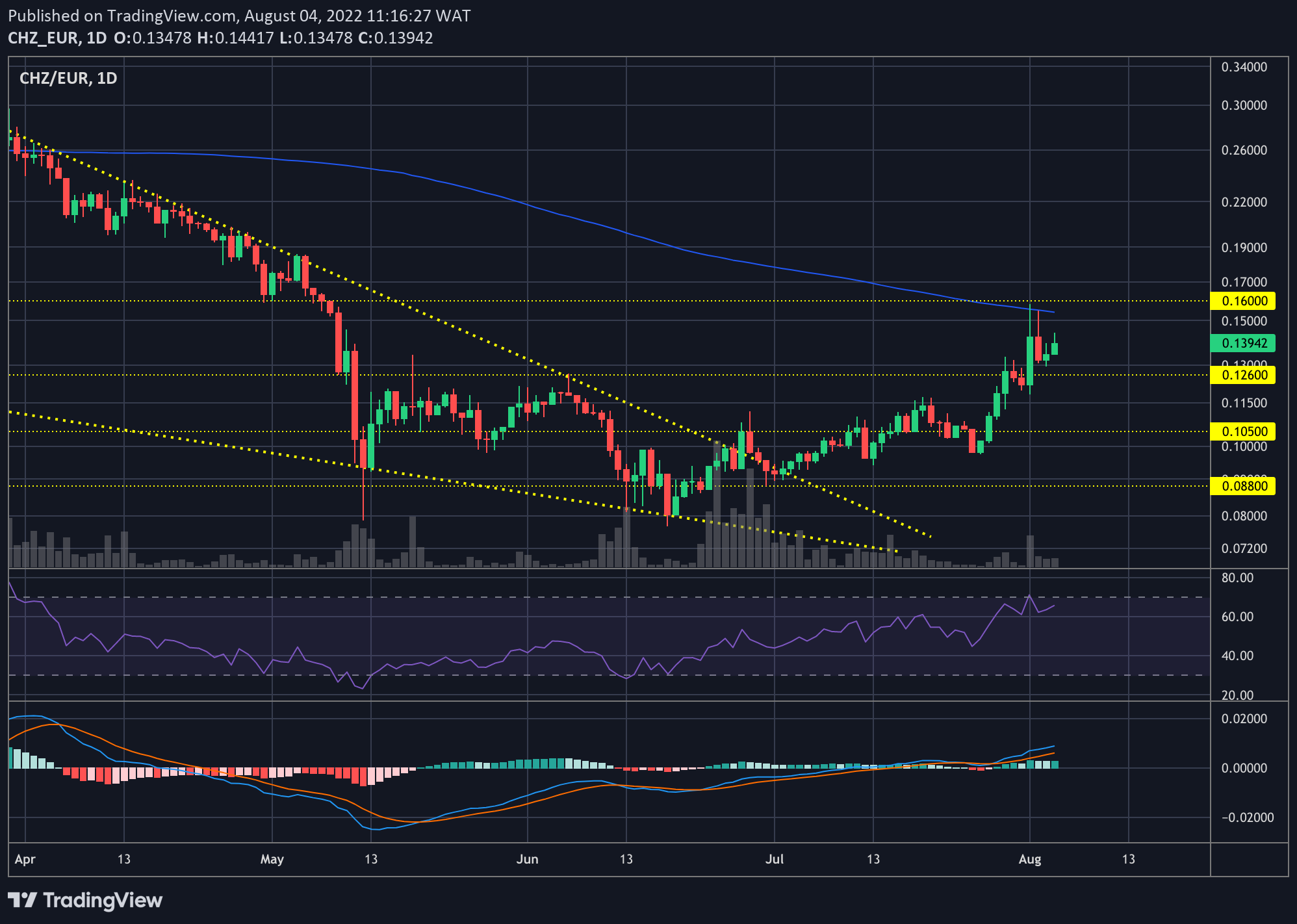 BEST is gaining ground since forming a bottom in June at the €0.325 mark. Momentum indicators, RSI and MACD started to reverse slowly from oversold positions. First resistance for bulls could be the dynamic trendline around €0.56. 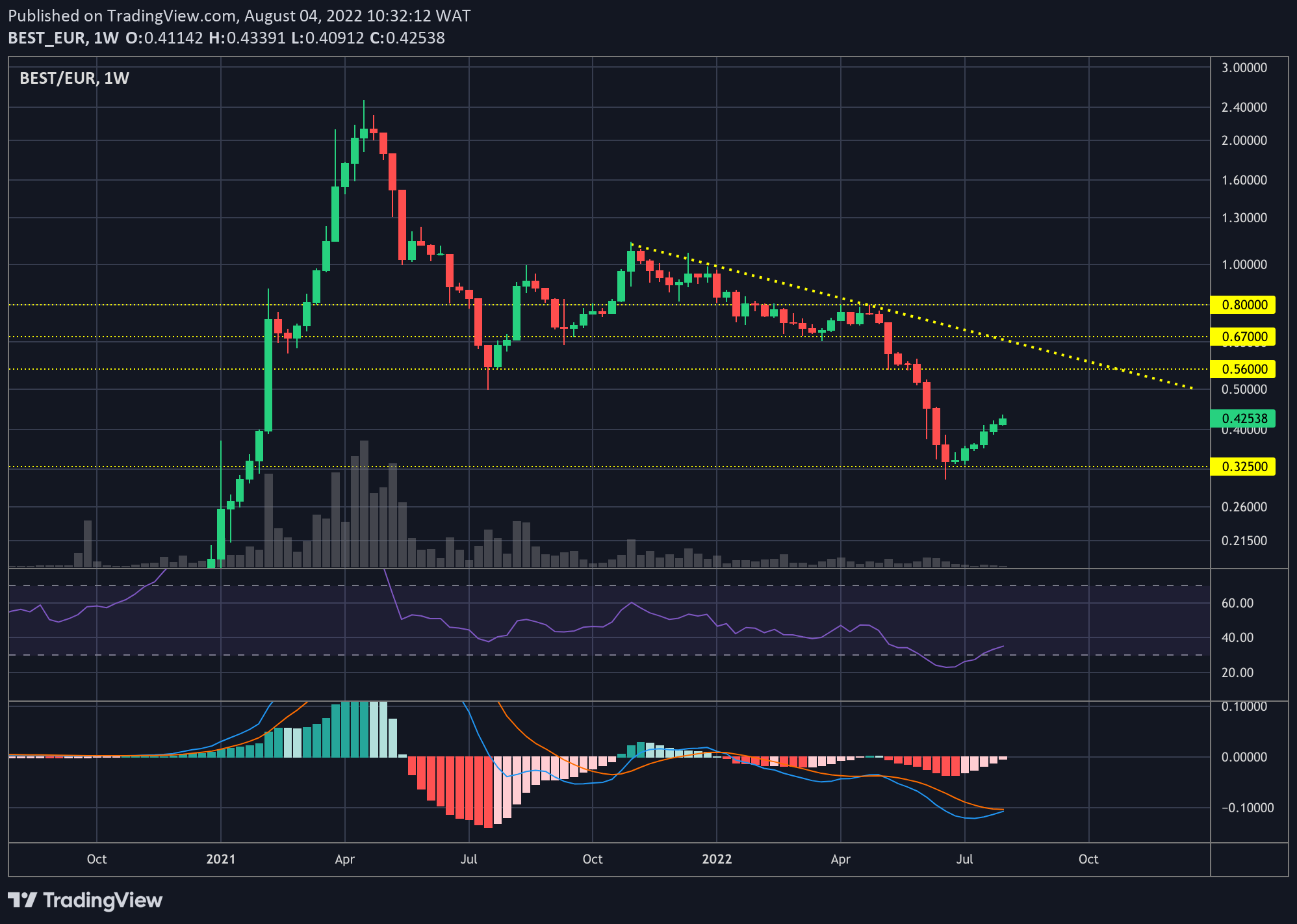 Fear and Greed Index above 30

Soaring inflation, rising interest rates and recession worries are all major driving forces of the current market. But the overall sentiment has clearly improved when compared to the index prints from just a month ago. Since recording the capitulation bottom reading in June at 6 points (out of 100), the Crypto Fear & Greed Index rose to 33 points this week. As the momentum is generated by the money moving the market, the index reading clearly shows the trend is currently pointing upwards. However, even with sentiments rising, it’s still impossible to perfectly time the market entries with sentiment indicators alone. Based on the current index reading, the market is still in the fear zone.