In the past week, the digital asset markets were mostly flat, with the total industry market cap hovering above €1.1 trillion. Bitcoin is trading above the key support trendline, attempting to break its crucial resistance level of €24,000. The weekly chart closed on yet another session performing over the 200-week average, adding a bit to the bullish side of the market. Meanwhile on the daily chart, the price was printing “doji” candles and was mostly in the €22,000 and €24,000 consolidation range. So far August has not brought any noticeable gains. In comparison, July was the best month since October 2021, with Bitcoin gaining almost 18%. 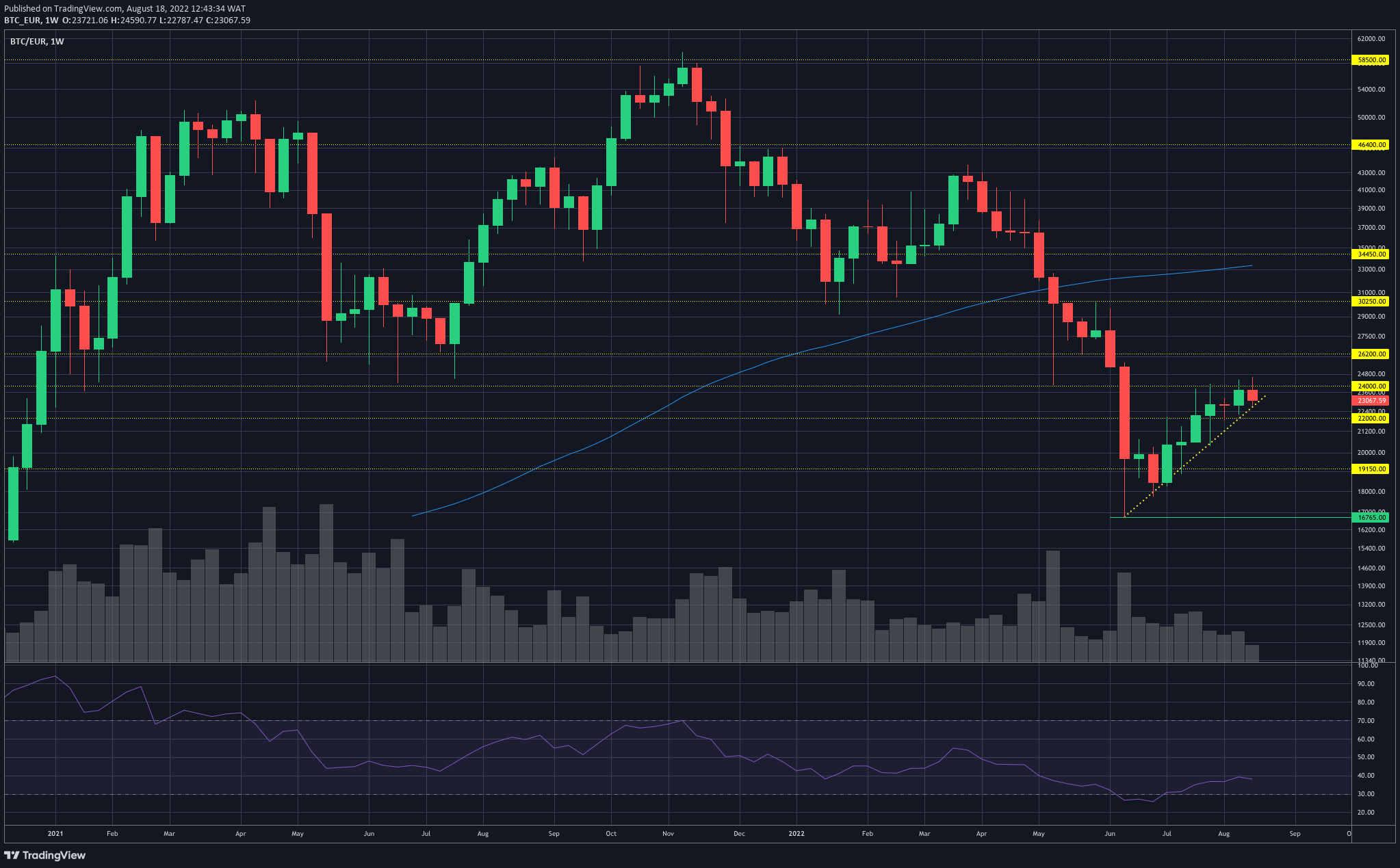 Large wicks on the BTC chart show that the bears are currently very active, holding the price under the €24,000 level. The price re-tested the trendline support, while a break above higher levels will require momentum and a sustainable trend. RSI is still above 50, marking bullish territory, but trading volumes are lower than in July, showing that the bulls are slowly getting tired. 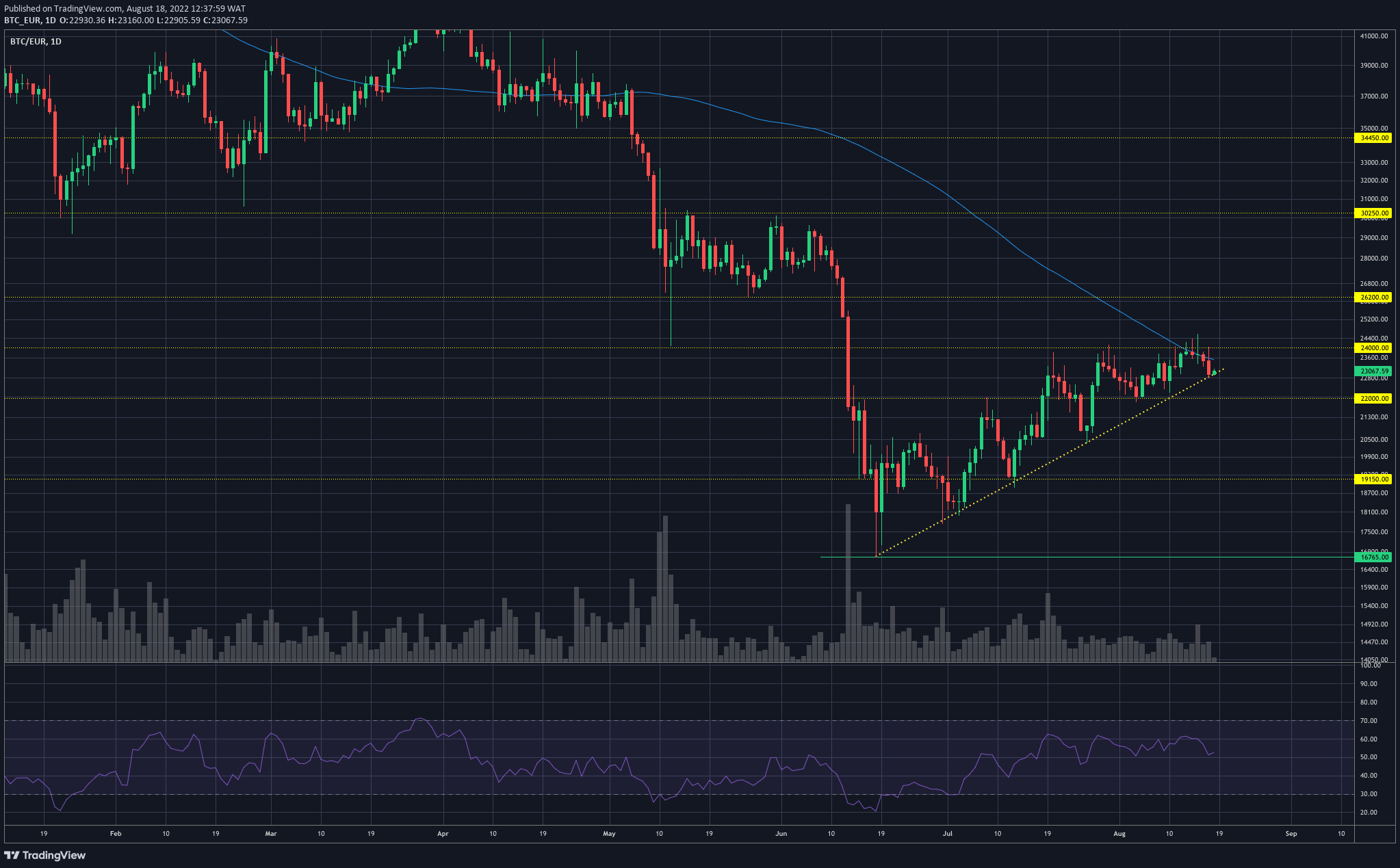 Ethereum is still outperforming Bitcoin and has gained some 4% over the past seven days, as evidenced by the ETH-BTC ratio surging towards 2021 highs. The ETH-BTC pair rose to 0,081, the highest since 5 January, 2022. This performance is even more significant when calculating the return from the bottom reached in June. BTC is up 47% at its peak while ETH was up 135% at its peak in August. 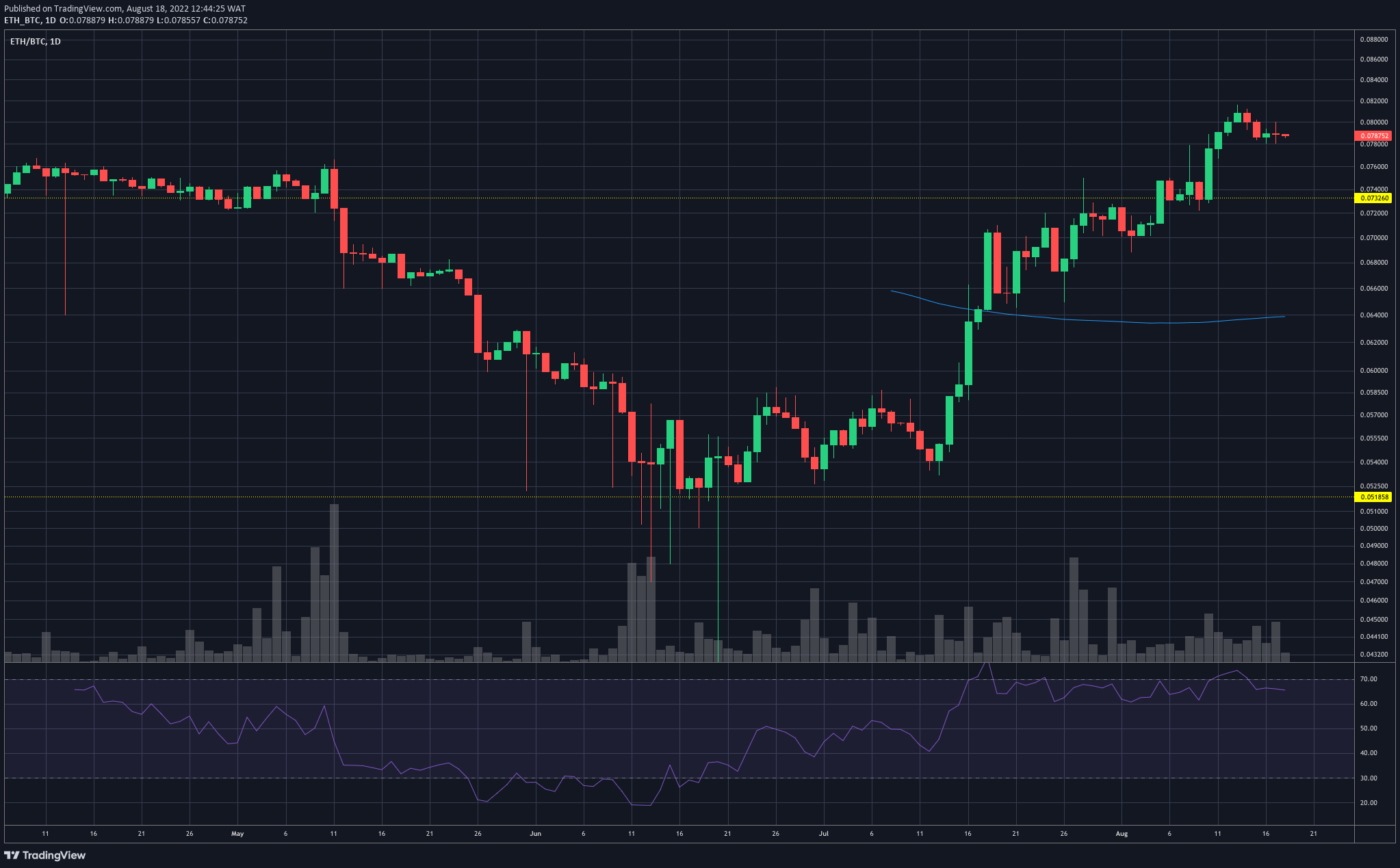 Ethereum is also outperforming the rest of the crypto market as traders are bullish on the smart contract platform’s upcoming transition to Proof-of-Stake. Ethereum has been trading below the psychological resistance of €2,000 for the past few days, but the bulls could not flip the resistance into support yet. This suggests that the bears pose a stiff challenge at this level. The up-sloping 20-day EMA and the RSI in the positive territory indicate that the bulls are in control on a lower time frame chart. 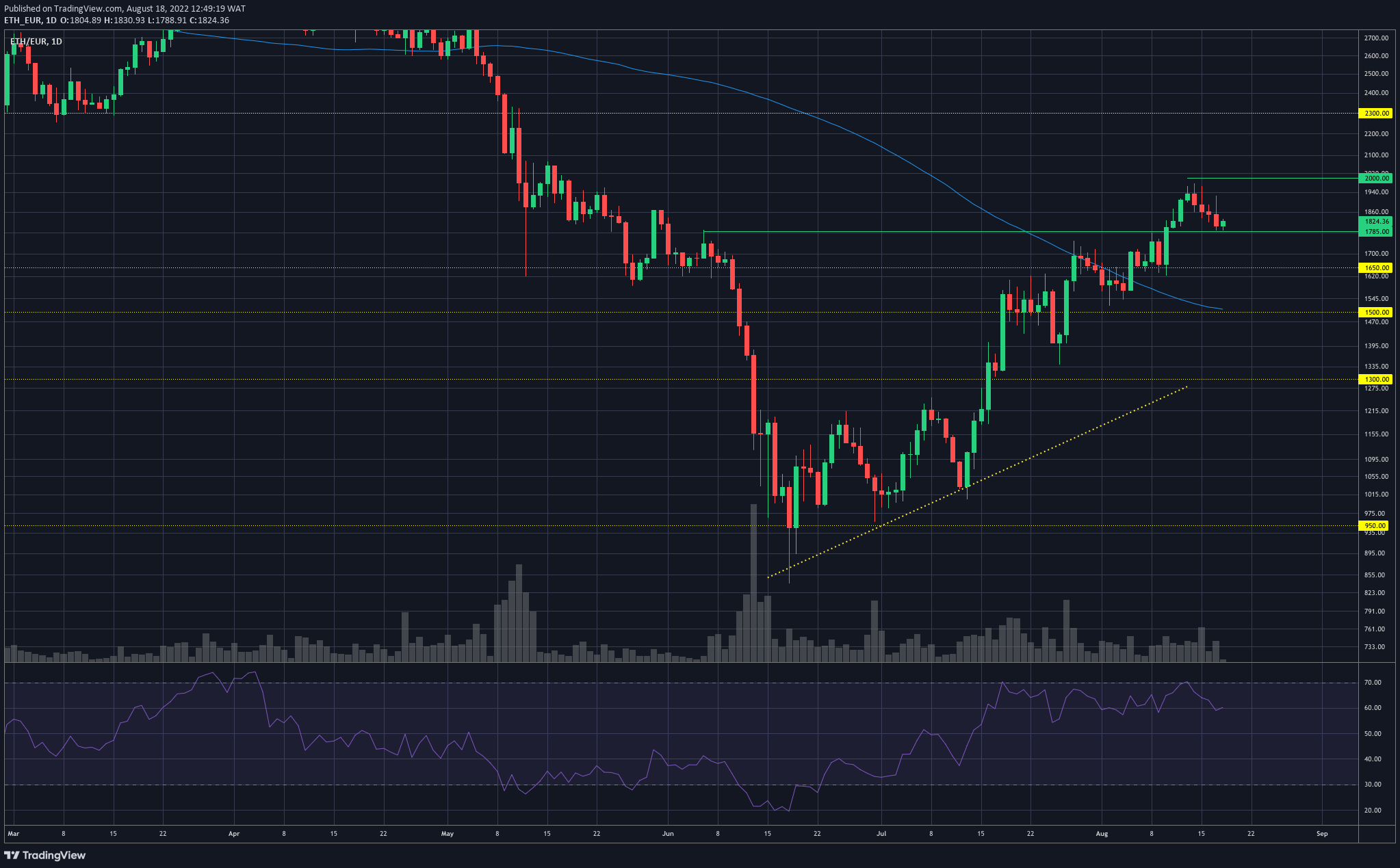 ETH revisited support at the €1,785 mark, where bulls are placing strong orders. A strong price performance lifted its share of the total crypto market cap, which surpassed 20% for the first time since December 2021. The increased bullish sentiment towards Ethereum can in part be traced back to the anticipated Merge event happening around September 15, when Ethereum will switch from a Proof-of-Work (PoW) to a Proof-of-Stake (PoS) model. The exact date depends on the hashrate. This shift will help cut Ethereum’s energy consumption thanks to ETH staking.

The crypto market sentiment seems to be relatively stable and is currently at a four-month high, as indicated by the Fear and Greed Index. The index is pointing above 40 on the daily chart, with the highest recorded number of 47 on August 14, a massive improvement since the low of 6 in June. Even though the market sentiment has vastly improved, the market is still in the “fear” zone, as it is still below 50. As the sentiment is proving to be a bit stagnant in the higher end of the fear territory, there seems to be more maturing in the bottoming and reversal process. Investors are slowly gaining confidence and are reaching towards altcoins, exposing a more aggressive stance and taking on more risk.

As Bitcoin is stagnating, major altcoins are following the same pattern. DOGE and Chiliz were exceptions and among the biggest weekly gainers.

DOGE is trading just under the long-term descending trendline resistance at €0.08. Bulls are trying to flip the resistance into support. The price gained momentum after breaking the €0.07 resistance line and a break above the descending trend line indicates that buyer demand has increased and a change in trend could be imminent. 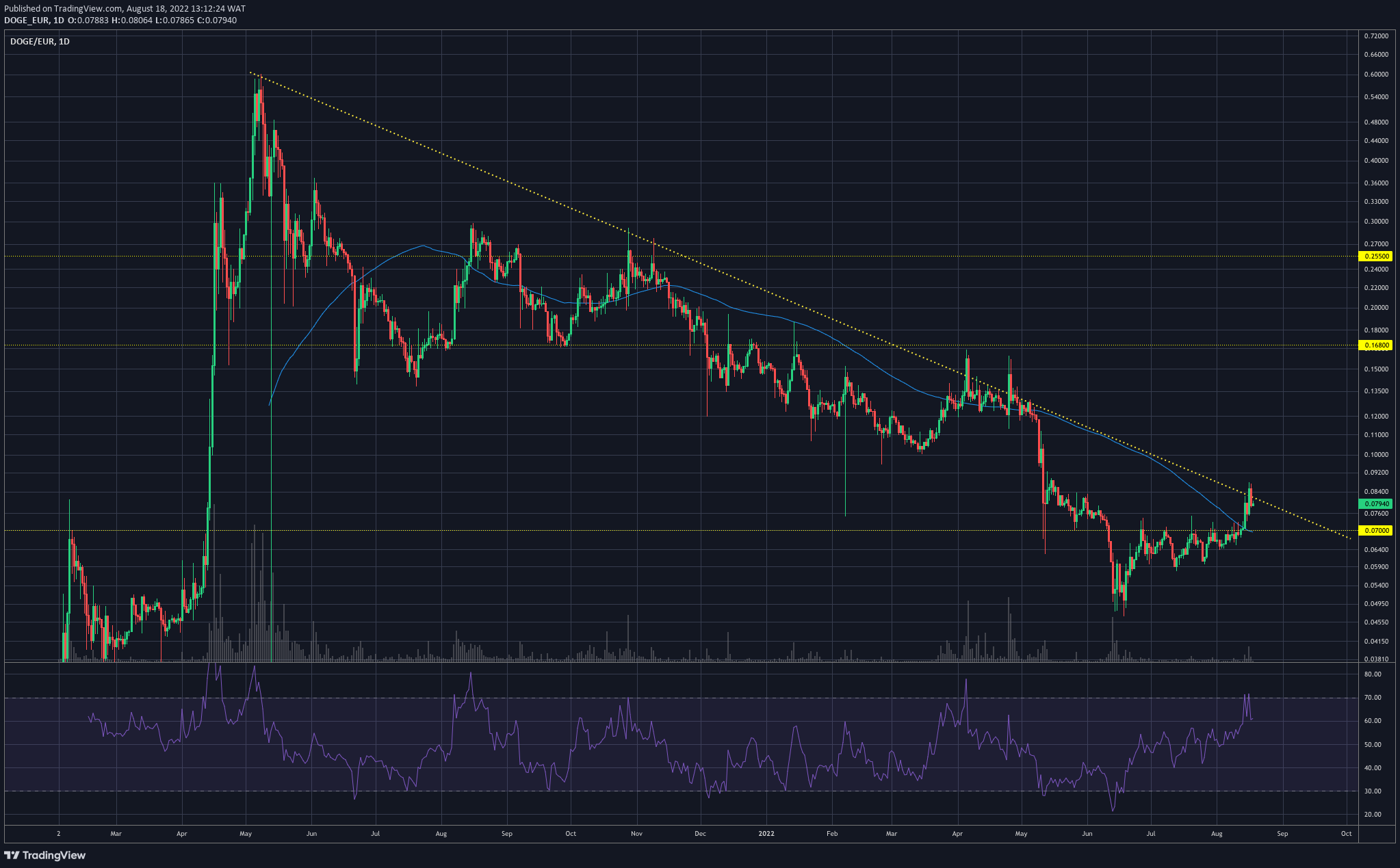 Chiliz has been in a strong recovery phase for the past seven days, surging more than 50%. The price is trading above €0.21, the highest since mid-April. In the short term, the 20-day EMA is still pointing upwards, but the RSI is high in the overbought territory. 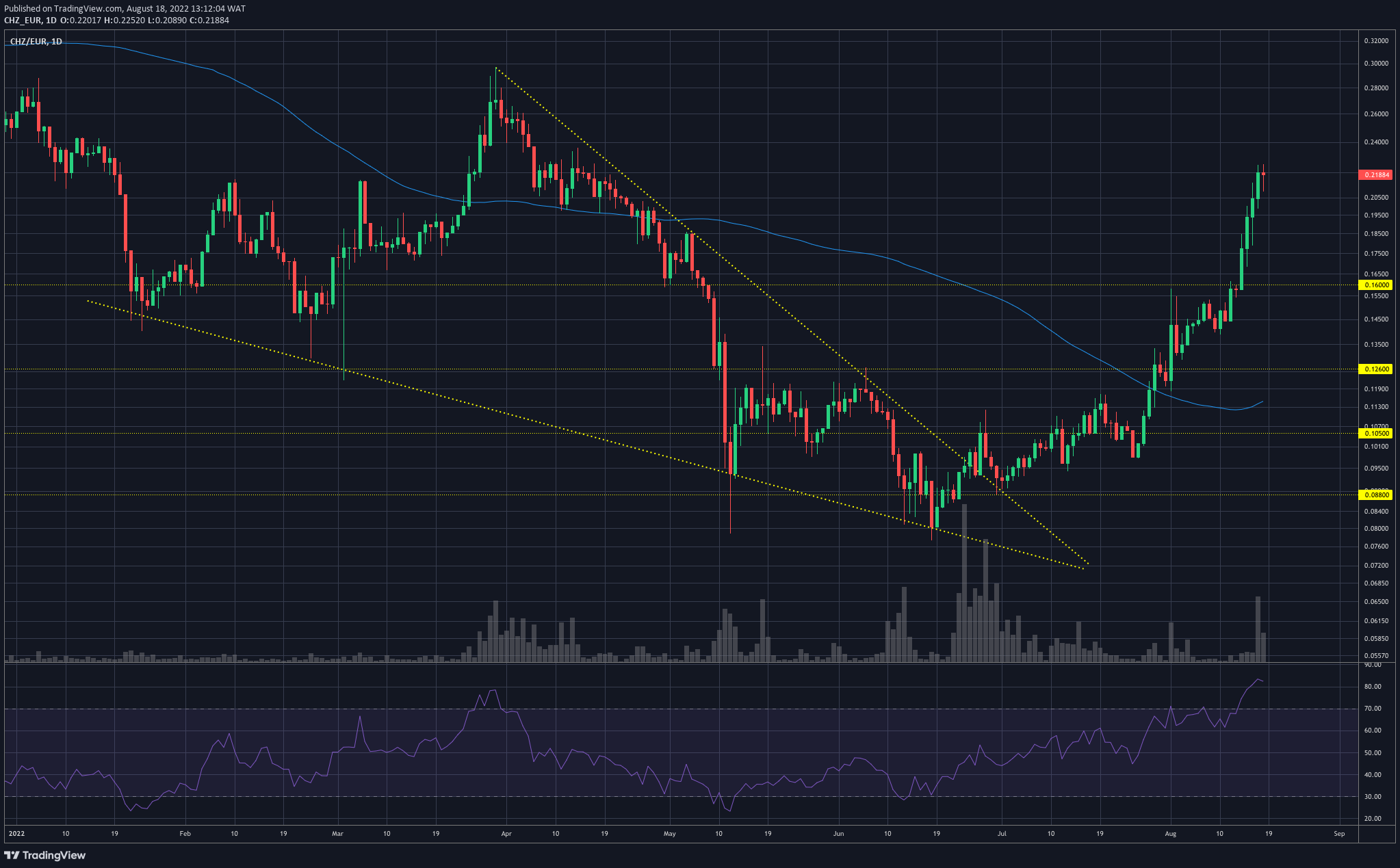 SOL rose to the overhead resistance at €46, but the bulls could not overcome this barrier yet. The price fell back to the trendline support of €40. RSI is still in bullish territory, showing that the positive trend is still in place. 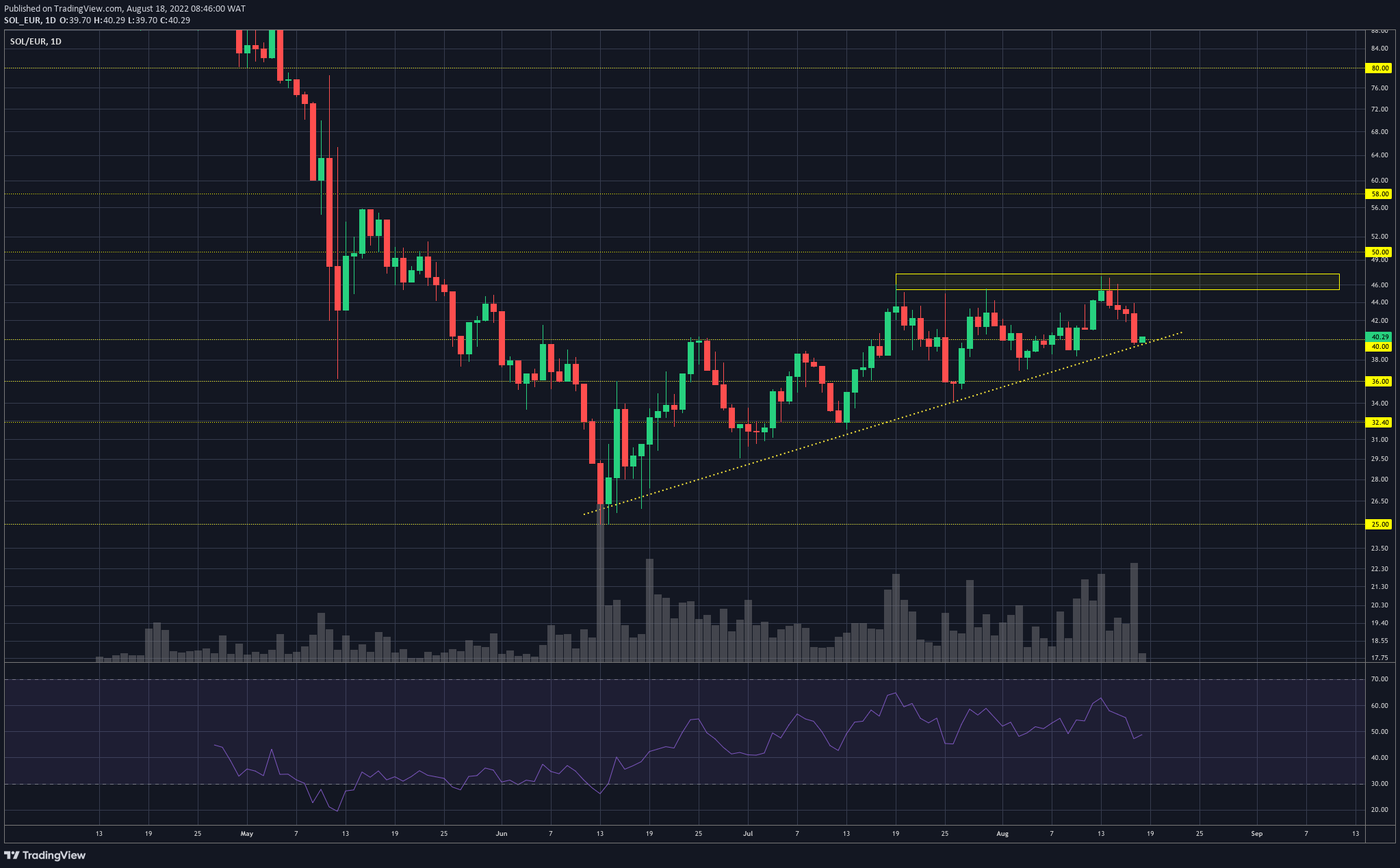 Solana hosted the second largest amount of NFT sales volume in July at €56 million, behind only Ethereum, which generated sales of some €530 million.

IOTA bulls tried to clear the overhead hurdle of the descending trendline, but the bears haven’t relented yet. The price is trading around the €0.32 support zone and just above the 100-day MA. 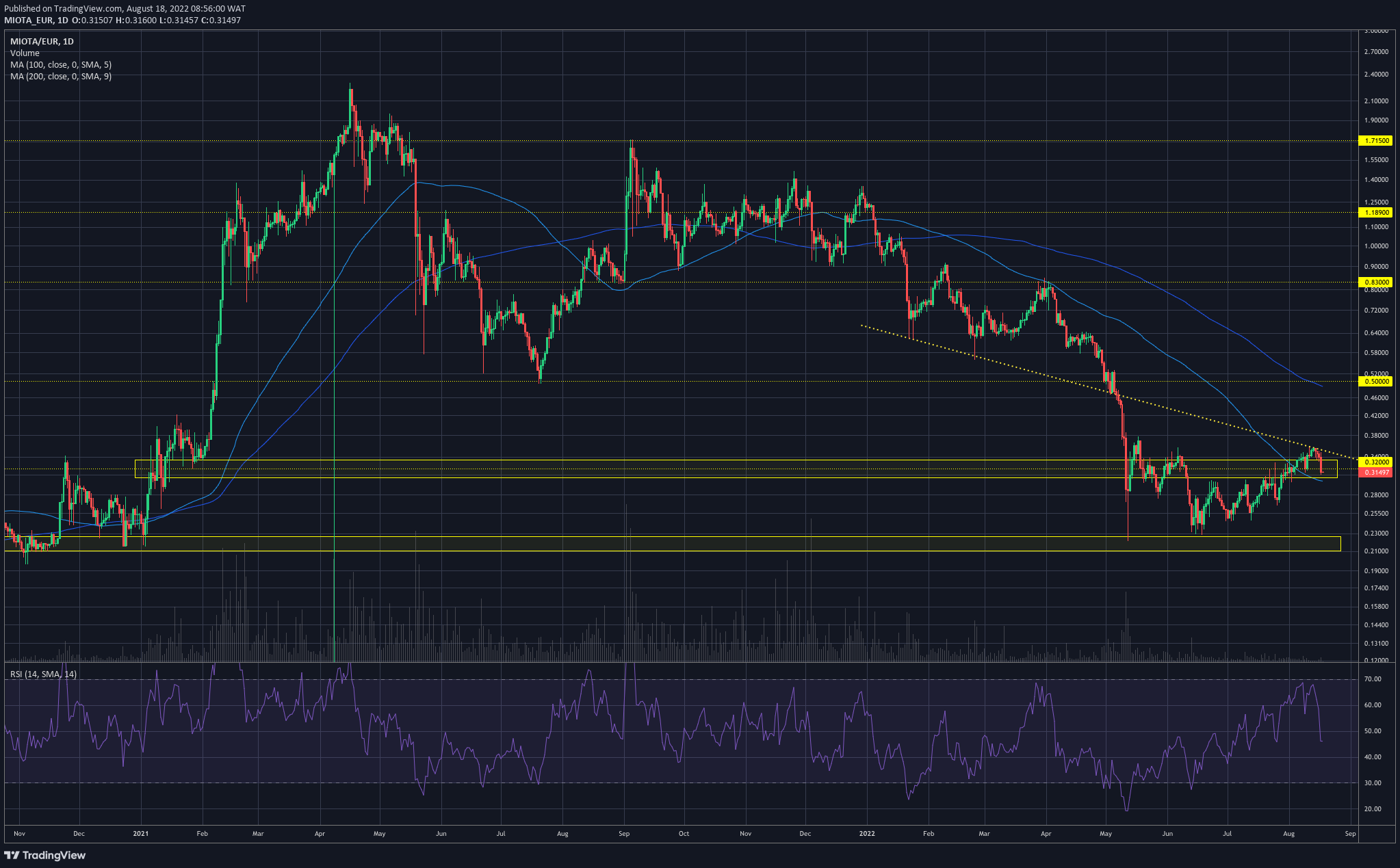 Disclaimer: This content is for informational purposes only and is not to be taken as financial advice. We highly recommend taking the time to do the necessary research before making any investment. Be aware that past performance is no indication of future results.