Bitcoin struggles to reverse its trend

The past seven days were relatively bad in terms of price development, as the total capitalisation fell under the €1 trillion mark and most of the major coins ended the week in the red. The total crypto market cap has fallen some €50 billion in the last seven days and is down almost 60% since the beginning of this year. Bitcoin closed a monthly candle on a bearish note with its price down almost 14% over the last 31-day period. In the weekly chartBitcoin closed bearish as well, meaning more downward pressure could follow, especially considering the lack of demand in the market and the global macroeconomic headwinds. The weekly chart displayed a substantial rejection of the €24,000 resistance level, which pushed the price down to the €20,000 area. Breaking away from its 200-week average, BTC seems to be struggling to maintain the support levels on lower time frames. But for now BTC is moving inside the consolidation pattern within the €19,150 and €24,000 range.

On the daily chart, Bitcoin’s price is still consolidating under the €20,000 zone and is struggling to gain pace above the resistance. On the downside, an initial support is near the €19,150 level, while the main hurdle on the upside is near the €20,600 level. Fear & Greed Index is at 20 points, extreme fear is back

The recent broad market price slide has also brought down the sentiment in the Fear & Greed Index, which is back at extreme fear levels. At 20 points on the scale, the bears seem convinced that the market will continue to decrease. The index is down 5 points from the week before and down 27 points from its high in August.

Ethereum turned bearish after reaching the €2000 level and returned to the trendline support, which is holding strong at the moment. Though the price is currently teasing the €1,400 support area, a breakout below would push the price towards the €1,300 mark, while a pullback from the higher low trendline could make it bullish at around €1,785. The price bounced back above the important 100-day MA, suggesting that the bulls are still in control.

On the lower time frame chart, ETH is forming a smaller wedge pattern. The converging trendlines are narrowing, suggesting a breakout could follow in next weeks.

The ETH/BTC pair rose above the overhead resistance of 0.78 after testing the 0.072 support level. The pair is gaining momentum and vying for some more gains ahead of the ETH Merge. 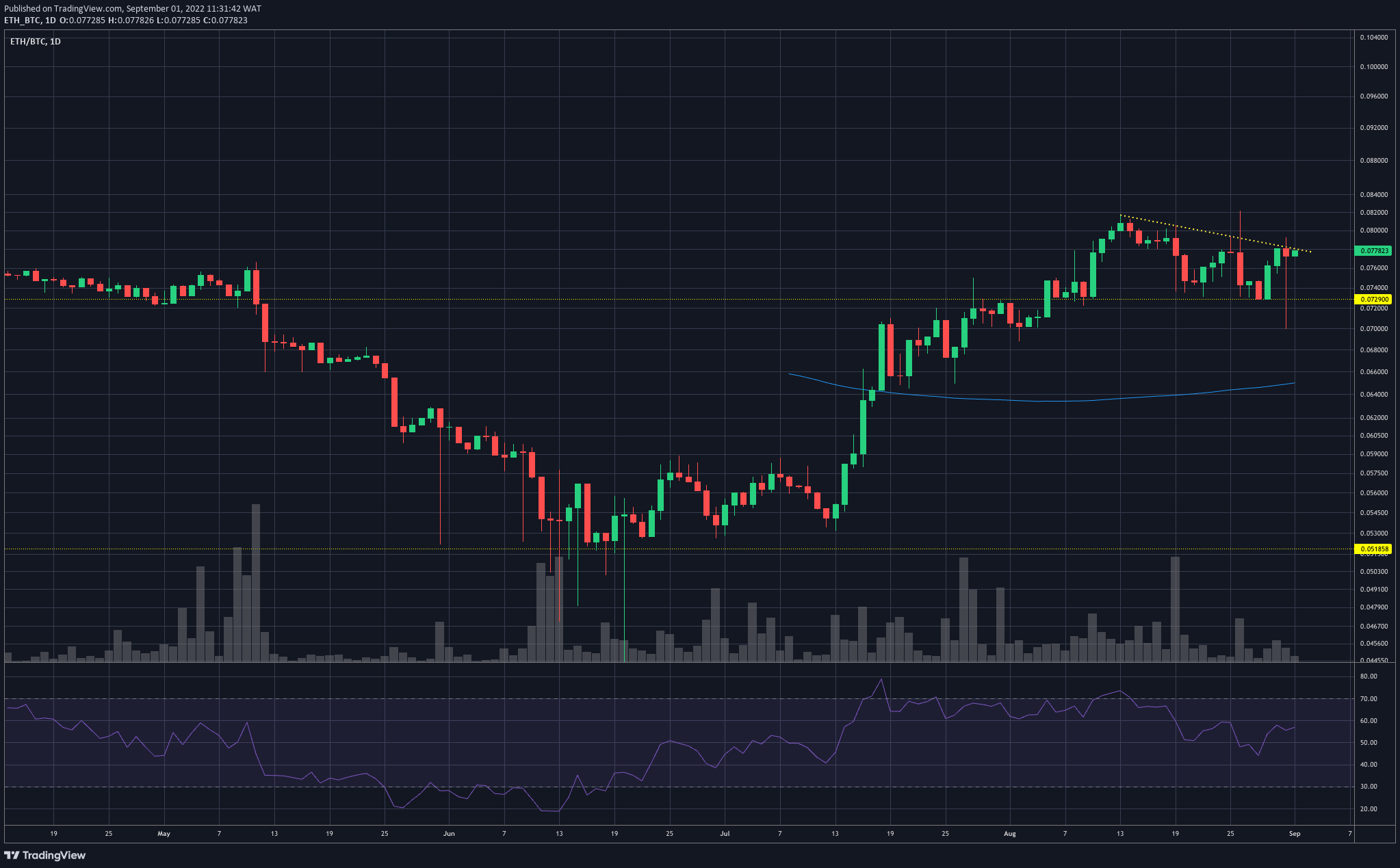 The Ethereum Foundation announced that the Merge might take place a bit earlier than previously expected. The date is now estimated to happen on 13th September, however it all still depends on the ongoing block production and the hashrate.

ADA price is consolidating ahead of Vasil Hard Fork

The ADA price is consolidating around the €0,45 level, just ahead of the much anticipated Vasil Hard Fork upgrade. According to the IOHK team, the new update may be released in the next few weeks, as long as the network does not encounter any issues. The Vasil Hard Fork is set to introduce critical advancements to the existing Cardano ecosystem. The fork will essentially improve the functioning of the overall network alongside enhancing the development of smart contracts and DApps.

The BEST/EUR pair is moving down with the rest of the crypto market. The price is trading under the 100-day moving average and under the dynamic trendline resistance, which signals a bearish trend. A break above could ignite the trend reversal, while a first strong support stands at €0.325.