Ethereum moving bullish ahead of the Merge event

Macroeconomics and geopolitical events around the globe are heavily influencing volatility in the crypto market, while price action is tightly linked to the US stock market. The past seven days have mostly been flat, with most major cryptocurrencies trending downward as the total market cap is still hovering under €1 trillion.

Most of the price action was happening around Ethereum as traders are bullish ahead of the Merge. The much-anticipated event is scheduled to take place between September 13th and 15th. Ethereum developers already activated the Bellatrix upgrade, making the Ethereum node operators technically ready for the Merge. The Bellatrix hard fork was activated at epoch 144896 on the Beacon Chain. The purpose of this upgrade is to ensure validators are producing updated Beacon Chain blocks that will set up the codebase ahead of the Merge. 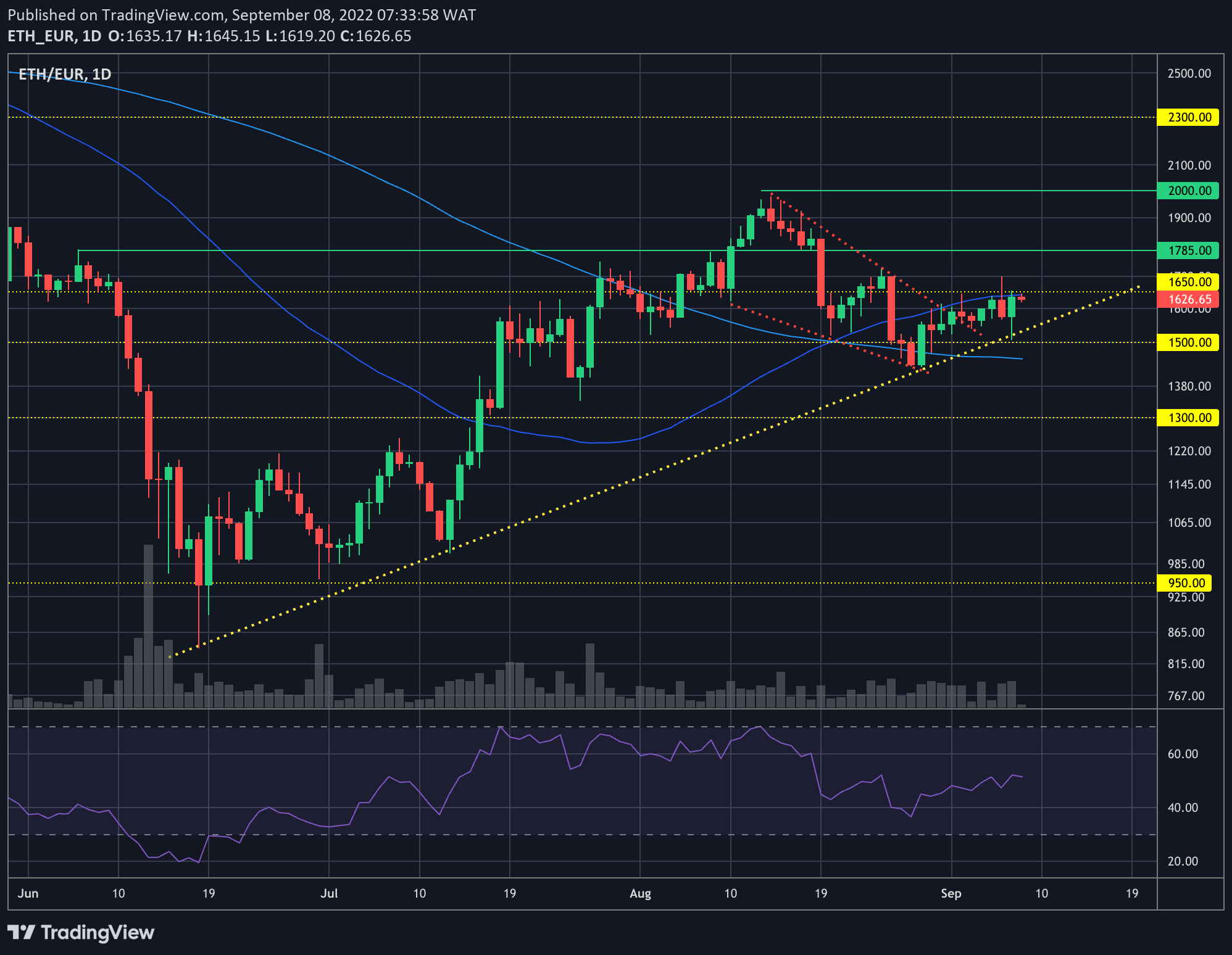 The Merge is the next step in the continued evolution of Ethereum. During the event, the existing execution layer will be merged with the recently deployed consensus layer (the Beacon Chain). The Merge will replace the Proof-of-Work consensus mechanism with a Proof-of-Stake system, while benefiting from the full history and the current state of Ethereum to enable a smooth transition.

The price broke away from the descending wedge pattern and is now showing positive signs. It might soon test the €1,785 level. There was a quick move above €1,650 earlier in the week, but the bears were stronger. The price is consolidating around this level and above the dynamic trendline support. The next major resistance is near the €1,700 level, while on the downside, an initial support is near the €1,500 level. 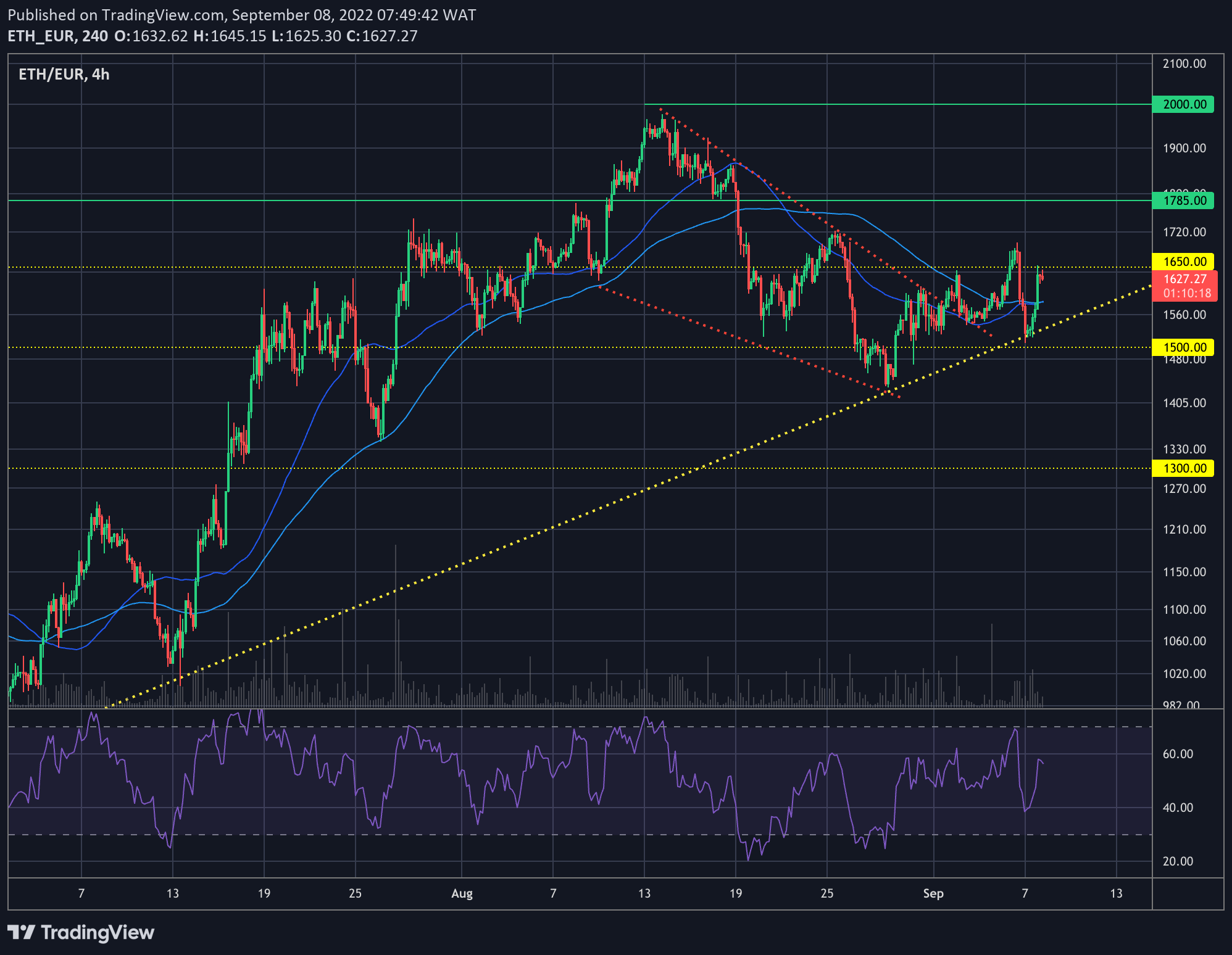 The Ethereum Merge is fuelling enthusiasm in the market as Ethereum pushes towards new yearly highs. ETH/BTC is currently trading at 0.084, a new high and up around 10% so far in September. 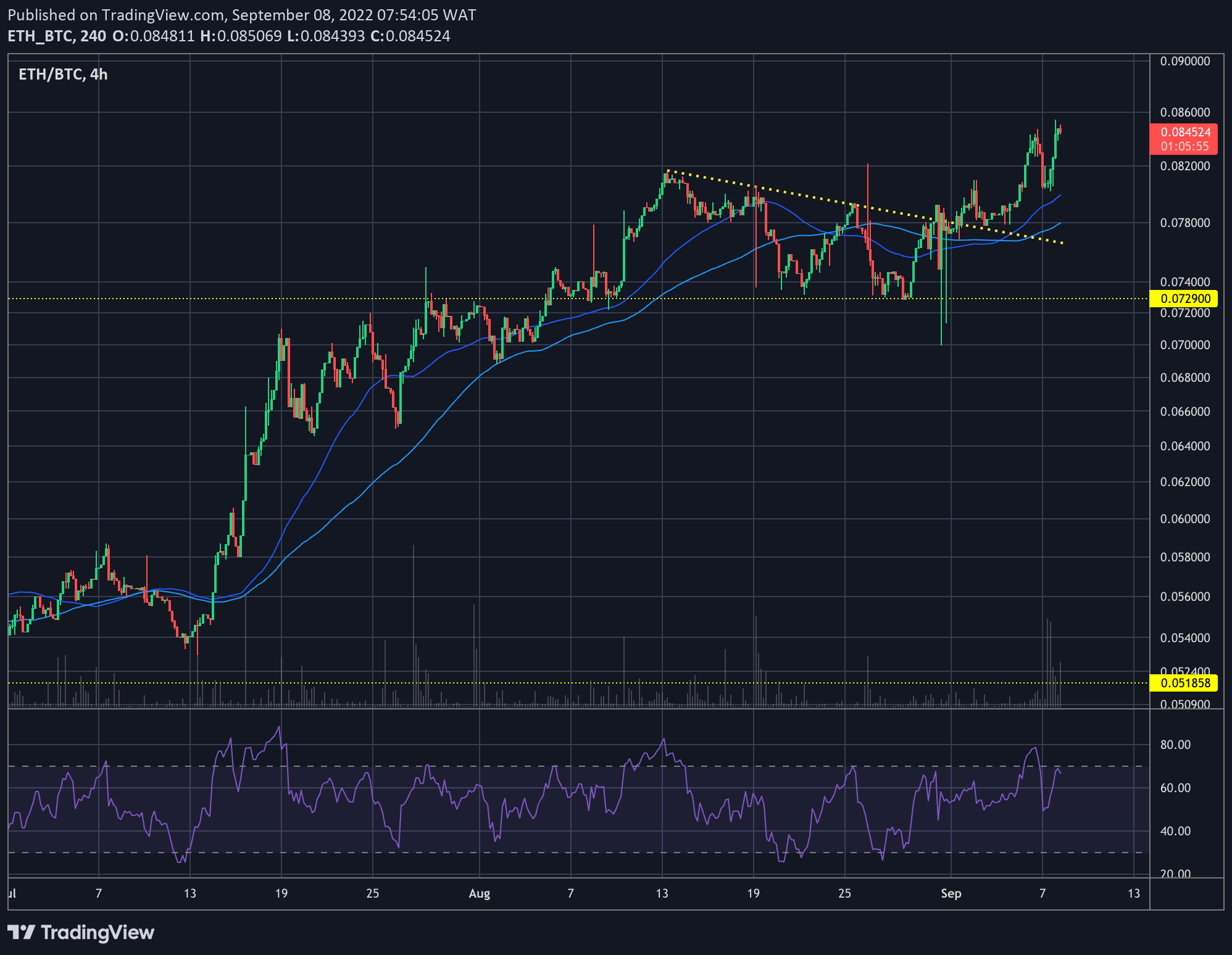 Bitcoin's underperformance relative to that of other cryptocurrencies, particularly ETH, has caused its dominance to fall to all-time lows. The BTC dominance dropped another 1% to close the week at 39%, the lowest since 15 January, 2022. On the flipside, Ethereum’s dominance increased over 21%, which is the highest it’s been all year.

Bitcoin has fluctuated in a narrow trading range, oscillating between a resistance of €21,750 and a support of €19,150 for the last ten days and trading at very low volatility. On Wednesday the Bitcoin price took a dive under the support of €19,150, marking its lowest price since mid-July. But the bulls managed to push the price back up again. This level of support is very important for the mid-term Bitcoin movement. 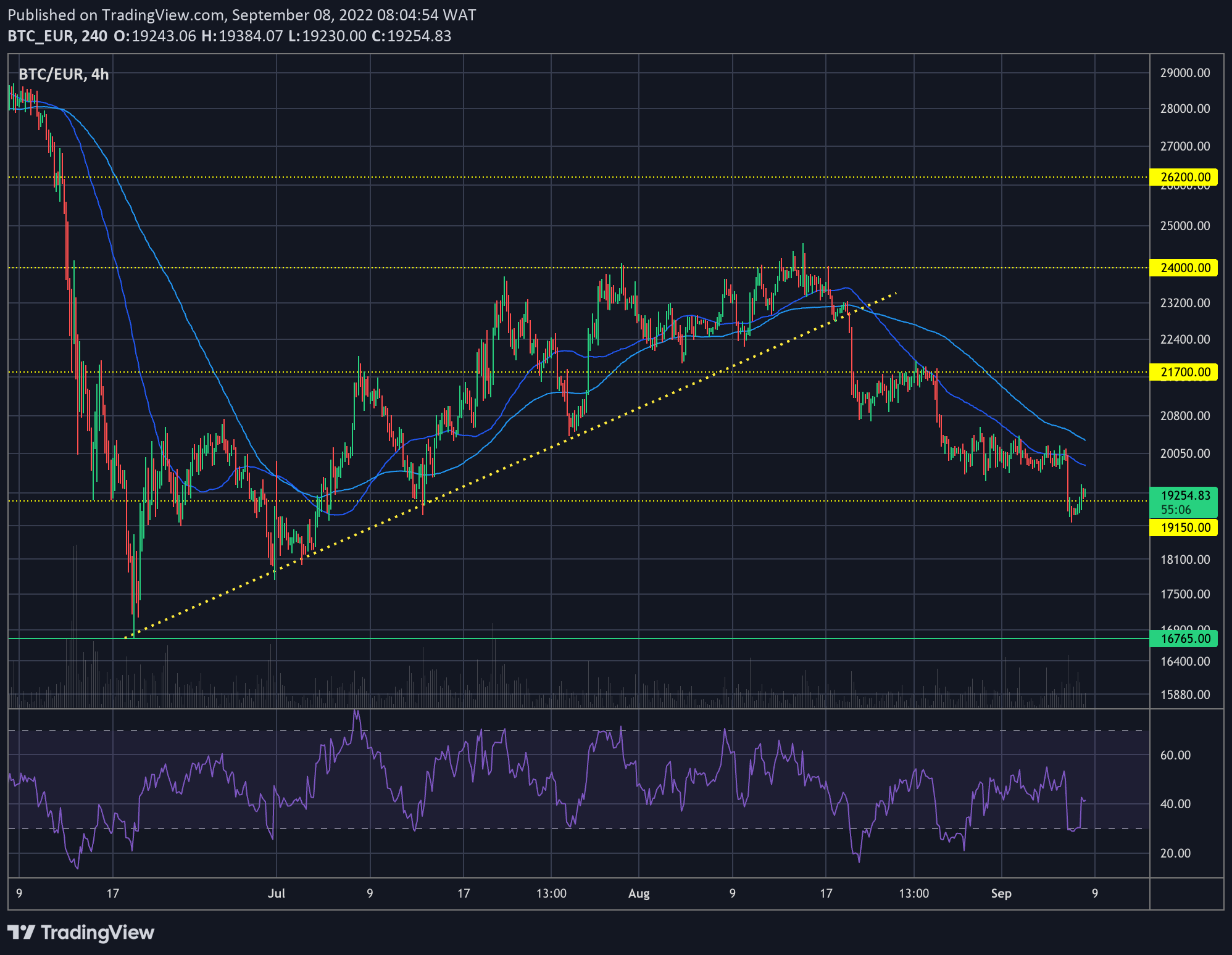 The daily and intraday charts give a more detailed outlook for the BTC price development and it seems that BTC will continue to move lower as it keeps breaking local support. Any time a sideways or correction pattern reveals itself, it meets a selling pressure followed by breakdowns.

The Fear and Greed index in the extreme fear zone

The Fear and Greed Index has dipped back to the 20 mark – “extreme fear” territory. This comes after the Index reached the 40 mark in August. The market sentiment has been moving into the fearful territory for the last five months, the longest fear streak since the index's creation in February 2018. Sentiment may offer insight into a potential contrarian trade, but the timing remains unclear. Most often, major trough reversals occur at the selling climax amid the most extreme fear conditions.

The ADA token price rose some 10% in September, after it was announced that the Cardano blockchain’s hard fork upgrade, Vasil, has been scheduled for mainnet on Sept. 22. The ADA price closed the week with a bullish weekly candle, suggesting more bullish movement could follow. The price is trading around the €0.5 level, the highest it has been in three weeks. 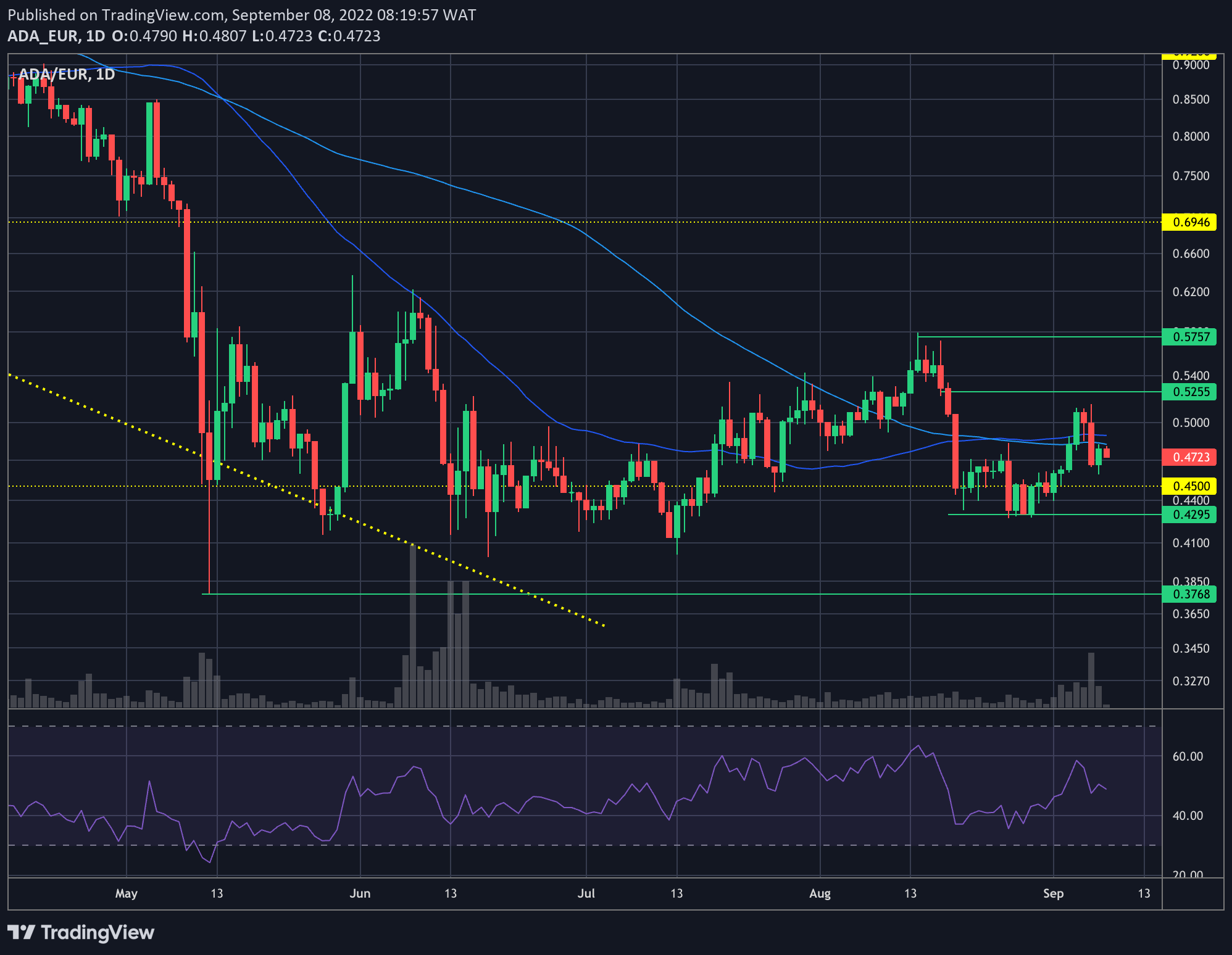 LINK outperformed most of the major cryptos in the last 10 days as the token registered a 10% gain. The price is trading near the major resistance zone of €7.7 and is approaching a descending trendline. Bulls need to push the price over the trendline in order to flip the trend. 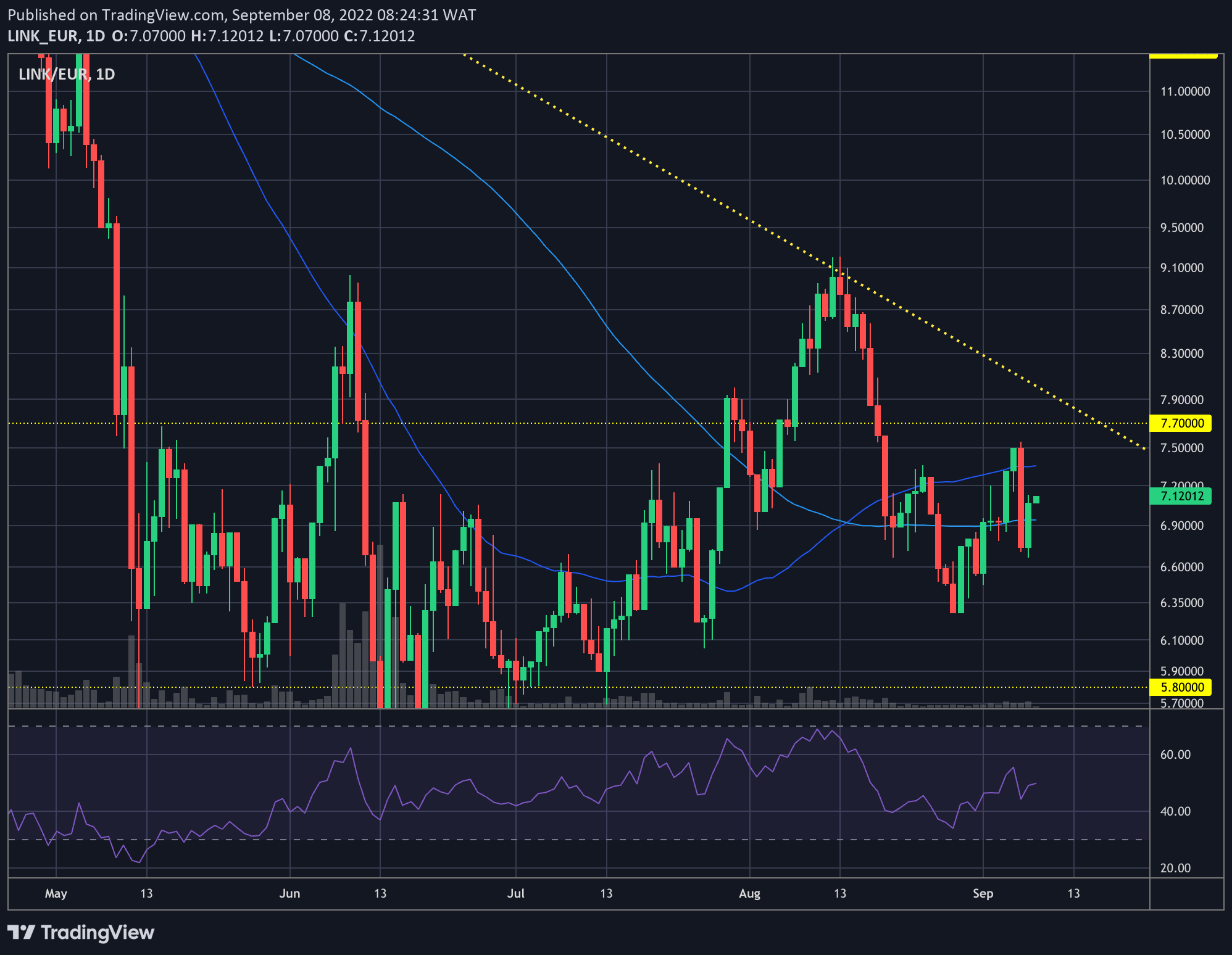 It’s likely that this price corresponds to the latest Chainlink developments: there were eleven integrations of three Chainlink services across five different chains, namely BNB, Ethereum, Phantom, Polygon, and Solana. Developments in an ecosystem are always a positive signal as they reflect the efforts of the developers to improve the network.