Though the week started off calm after a pretty bullish weekend, things took a turn after the release of a key August inflation report from the Federal Reserve (FED) on Tuesday. Bitcoin and all major cryptocurrencies lost ground as the August U.S. consumer price index, a key inflation indicator, came in higher than expected, driving down equity markets and pointing to more aggressive interest rate increases by the FED. The top 10 cryptocurrencies by market cap fell, driving down the total crypto market cap by some €100 billion to under €1 trillion.

Inflation of the U.S. consumer price index (CPI) rose by 0.1% for the month and 8.3% year over year. Higher inflation numbers are clearly hurting investor optimism and driving the FED to implement even more aggressive rate hikes. The most likely outcome for the September Federal Open Market Committee (FOMC) meeting next week is a 75bps rate hike, priced at a 86% probability. 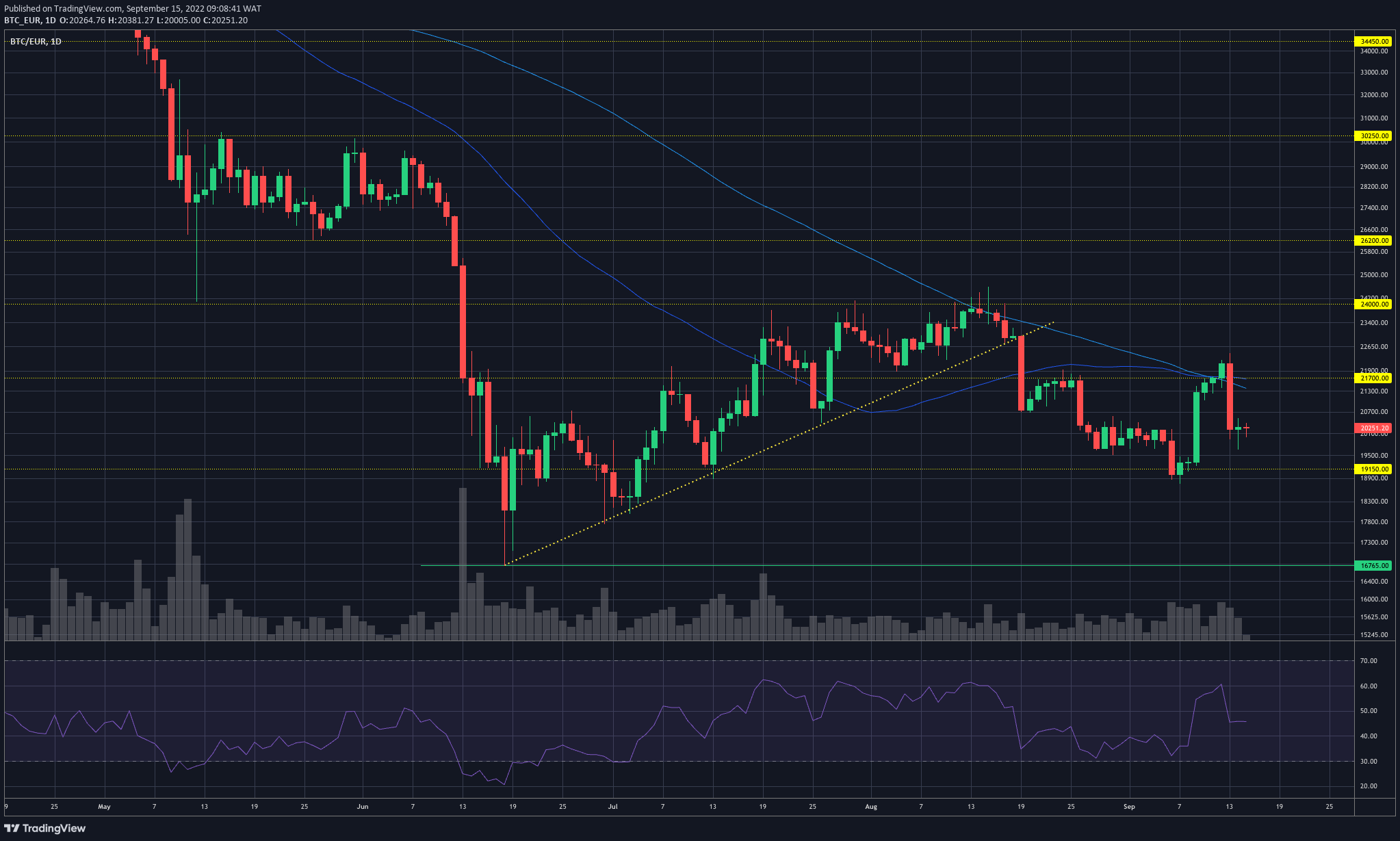 Sentiment is bearish across all markets and global economies have started to slow down, with several leading economic indicators starting to become sluggish. Sentiment in the crypto market dropped back to the “extreme fear” zone, with the Crypto Fear & Greed Index at sub 30 levels.

On Thursday morning, Ethereum completed its long-awaited Merge from the Mainnet to the Beacon Chain. With this upgrade, Ethereum switched from a Proof of Work consensus model to Proof of Stake. The price of ETH is hovering above trendline support and just under the resistance zone of €1,650. ETH bulls were very active in last weeks, placing strong bids above the dynamic trendline support. The next resistance level is at €1,785. 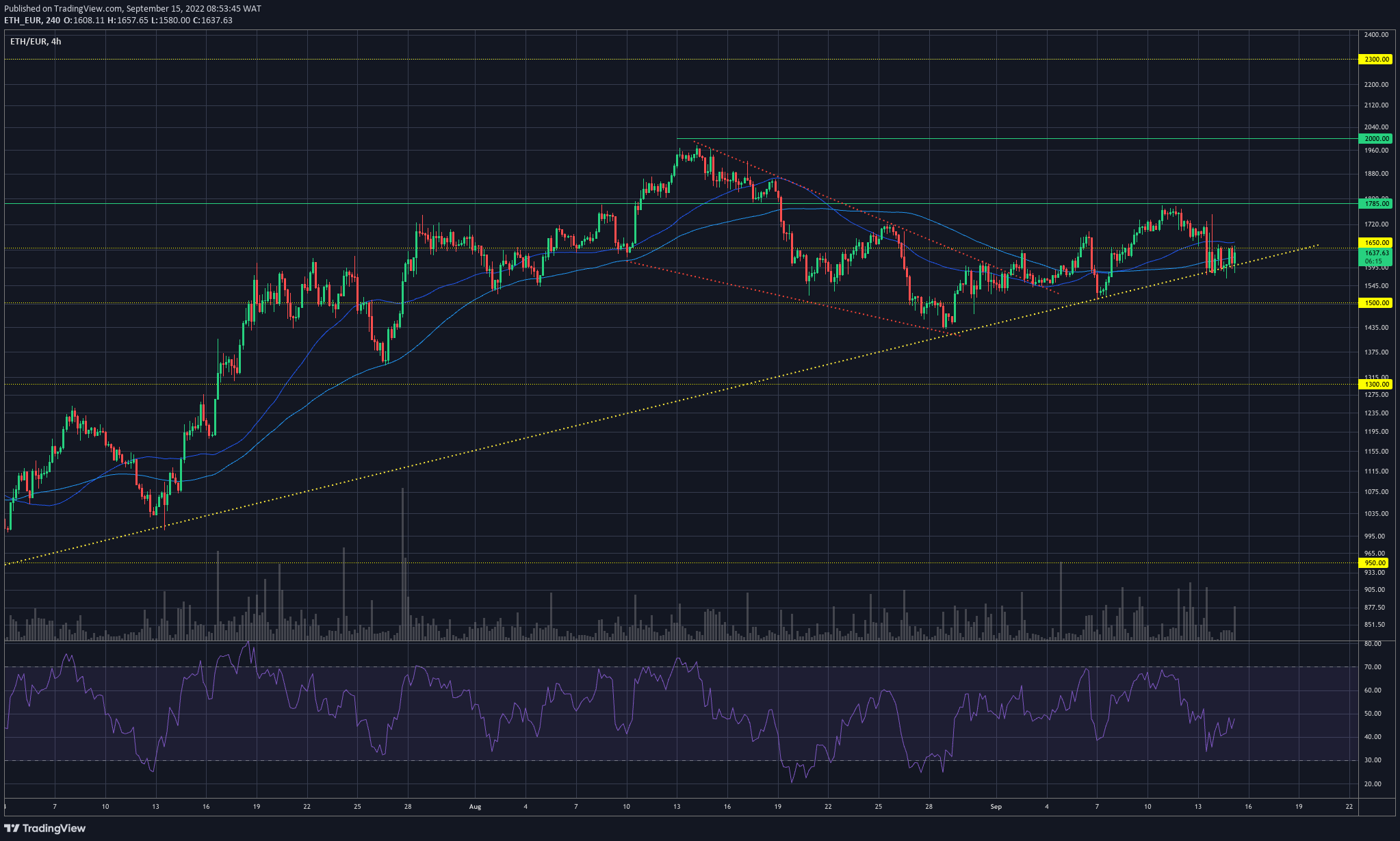 The upgrade has changed how new units of ETH are created and how transactions on the Ethereum network are validated. The switch to Proof of Stake is also set to have a huge impact on Ethereum’s rate of inflation, which will drop significantly. About 13,000 ETH were issued per day before the Merge – a number that will now drop to about 1,600 ETH per day. The transactions will be faster, more scalable, and over 99% more environmentally friendly.

Bitcoin started the week strong after reclaiming the €19,150 support zone andthe BTC price even passed the €22,000 mark as the crypto markets showed signs of momentum. However, the U.S. inflation report scared the market, causing the price of Bitcoin to drop more than 10% within the day. 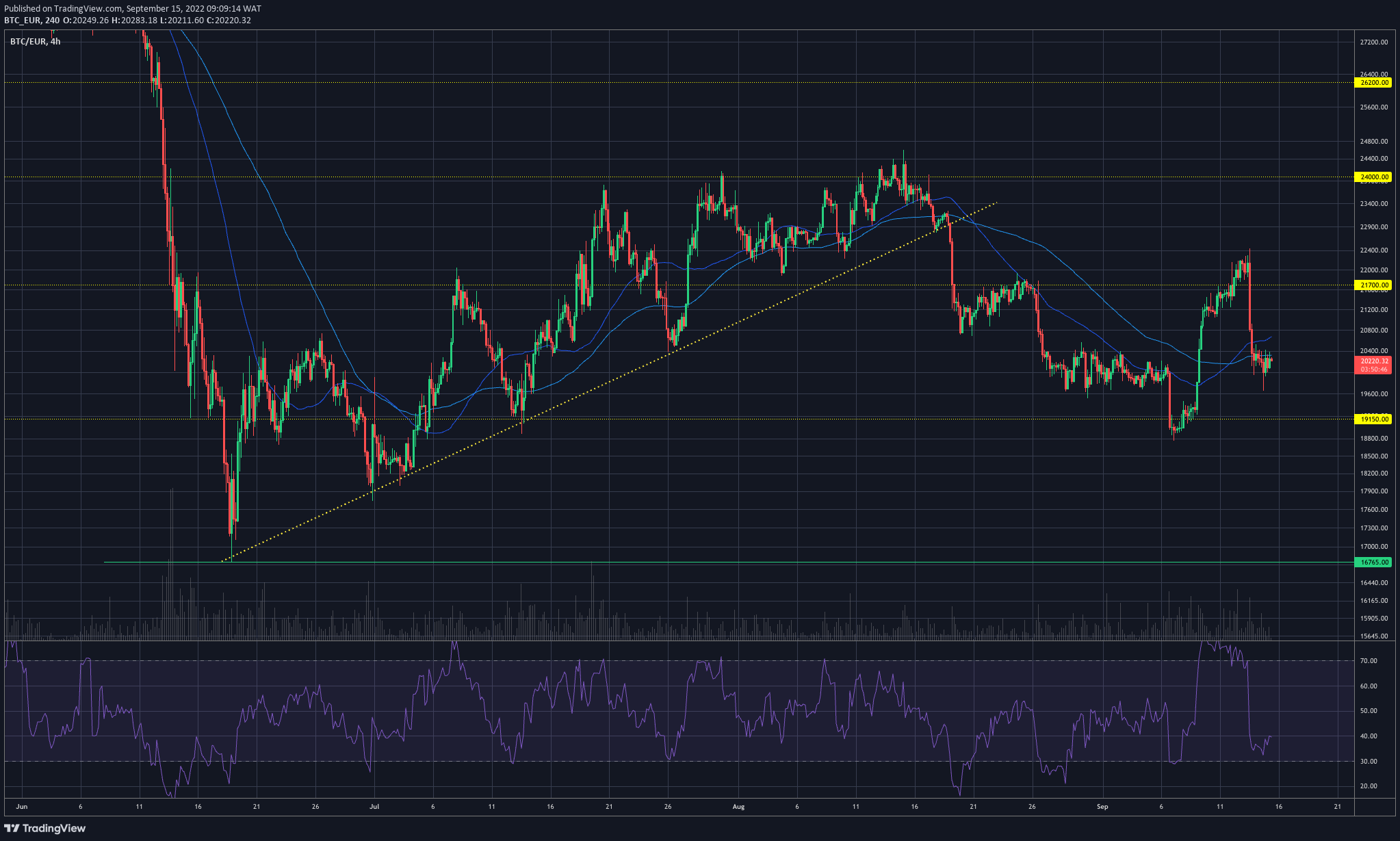 The BTC price remained volatile on the lower time frame chart, while the higher time frame chart showed a wide trading range. After a break over a horizontal resistance in mid-August, BTC is moving sideways in the medium-term direction, and downwards in sync with overall the bear market trend. The first support zone is at the €19,150 level, while the upside resistance stands at €21,700. However, history shows that September is usually the worst performing month for Bitcoin (-5.86% on average since 2013).

The ETH/BTC pair gained ground as investors were selling Bitcoin for Ethereum ahead of the Merge. The pair is trading back above the 0.08 level, after retesting the 0,075 support zone. 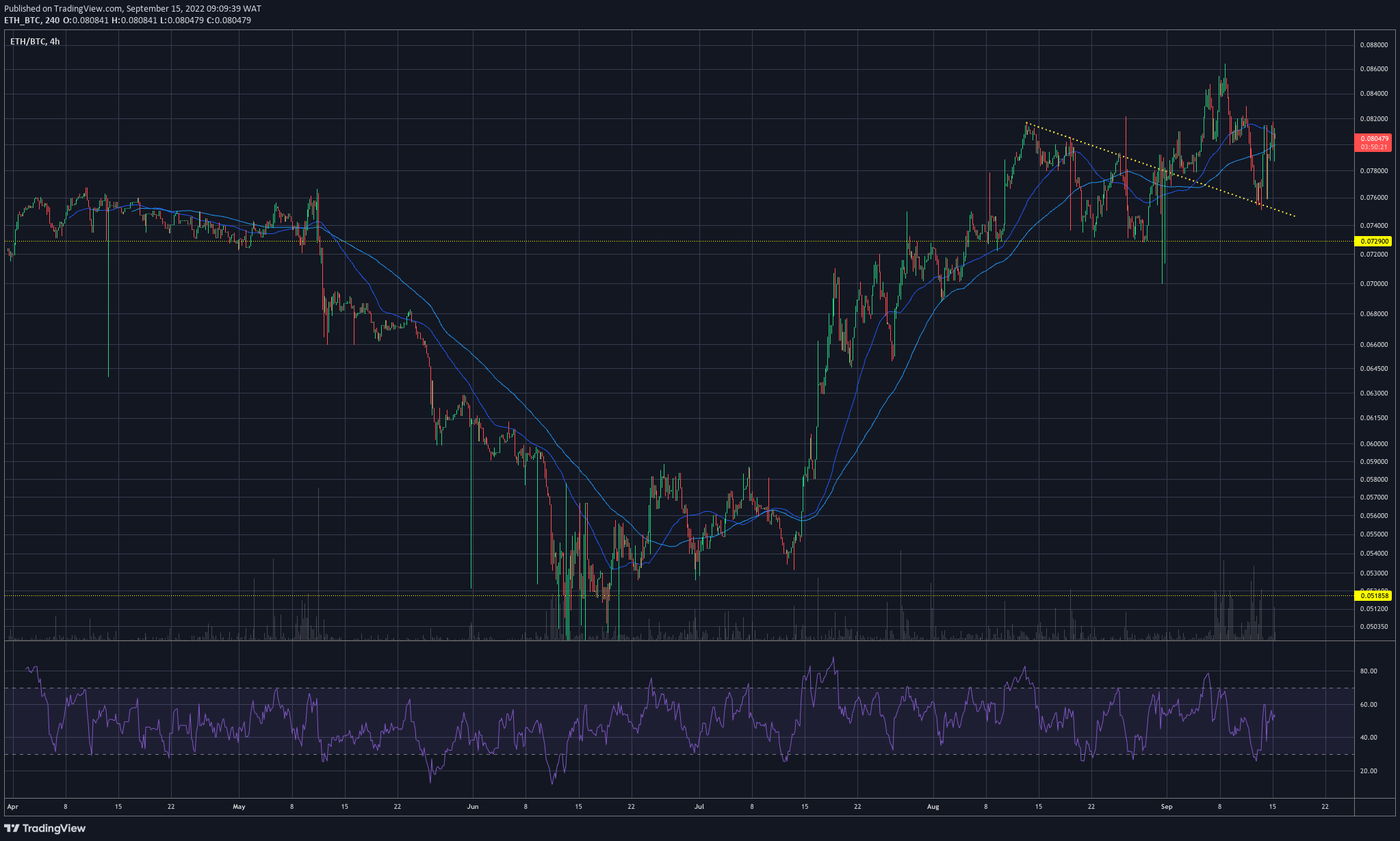 Many altcoins are trying to recover after Tuesday's correction. Solana was one of the best performing crypto assets until the overall market slump. The price dropped some 14% in a single day and found intermediate support at the €32.80 level. SOL is still trading above the 50-day MA, with the RSI momentum indicator at 50, showing that bullish sentiment is still in place. 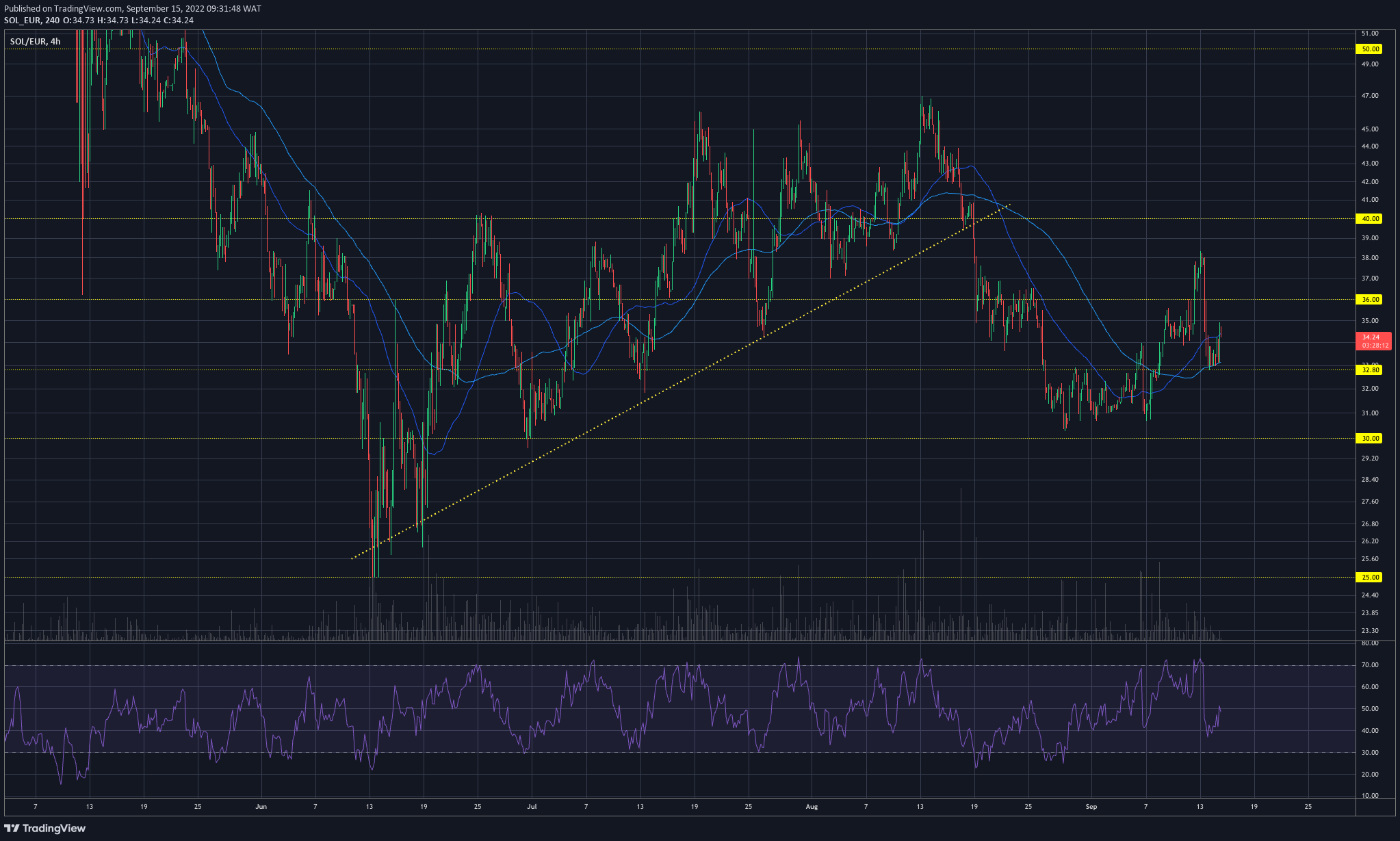 APE printed large bearish candles as bears showed strong hands at the €5.8 resistance zone. RSI is still in positive territory, suggesting bulls will try to push the price up and clear the €5.50 resistance. 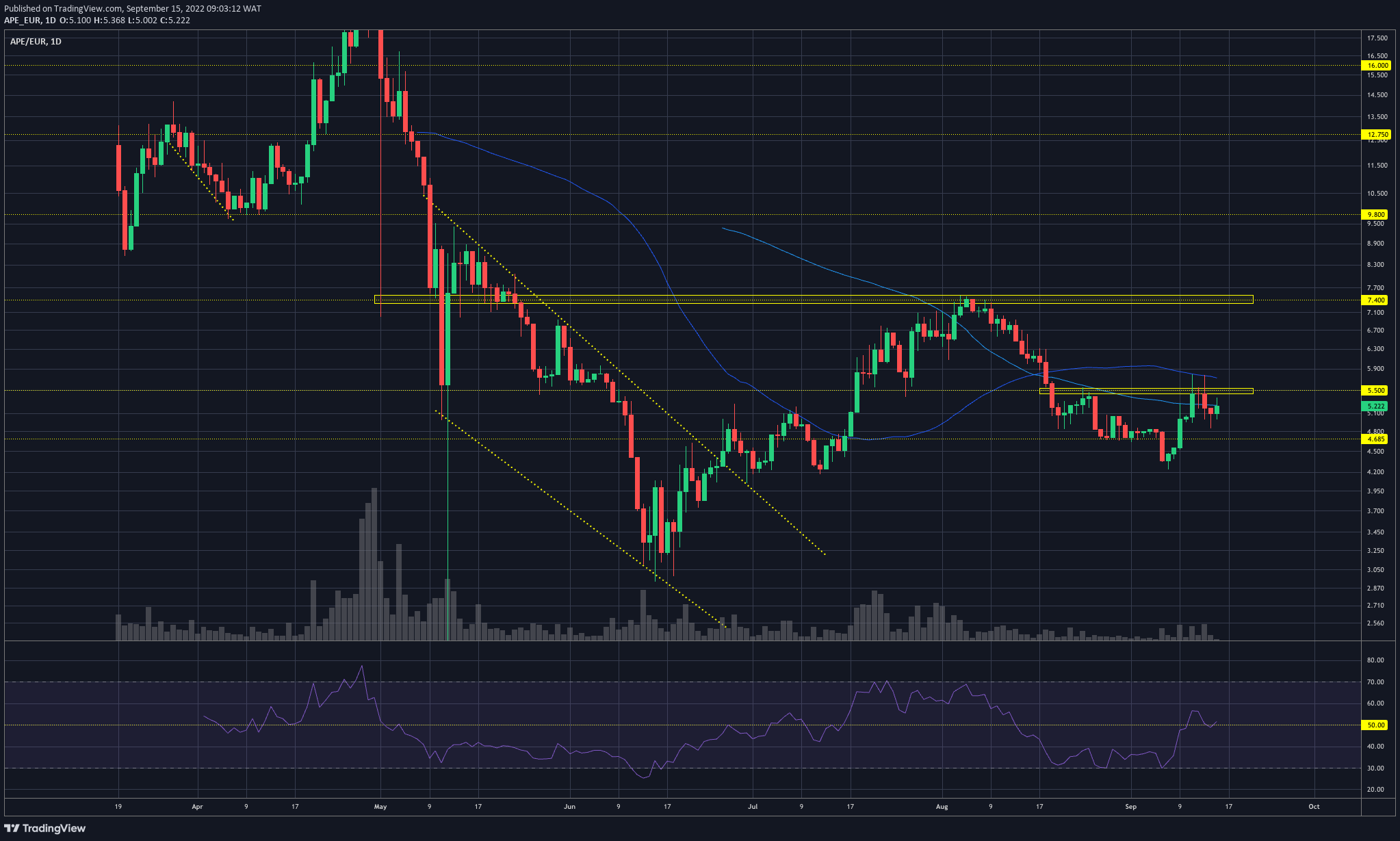 Polkadot led the losses among the top 10 cryptos during the past seven days, erasing all the gains from a week before. The price dropped back to the support level at €7. The chart is still bullish on the higher time frame charts, while the intraday chart is showing a high level of volatility. 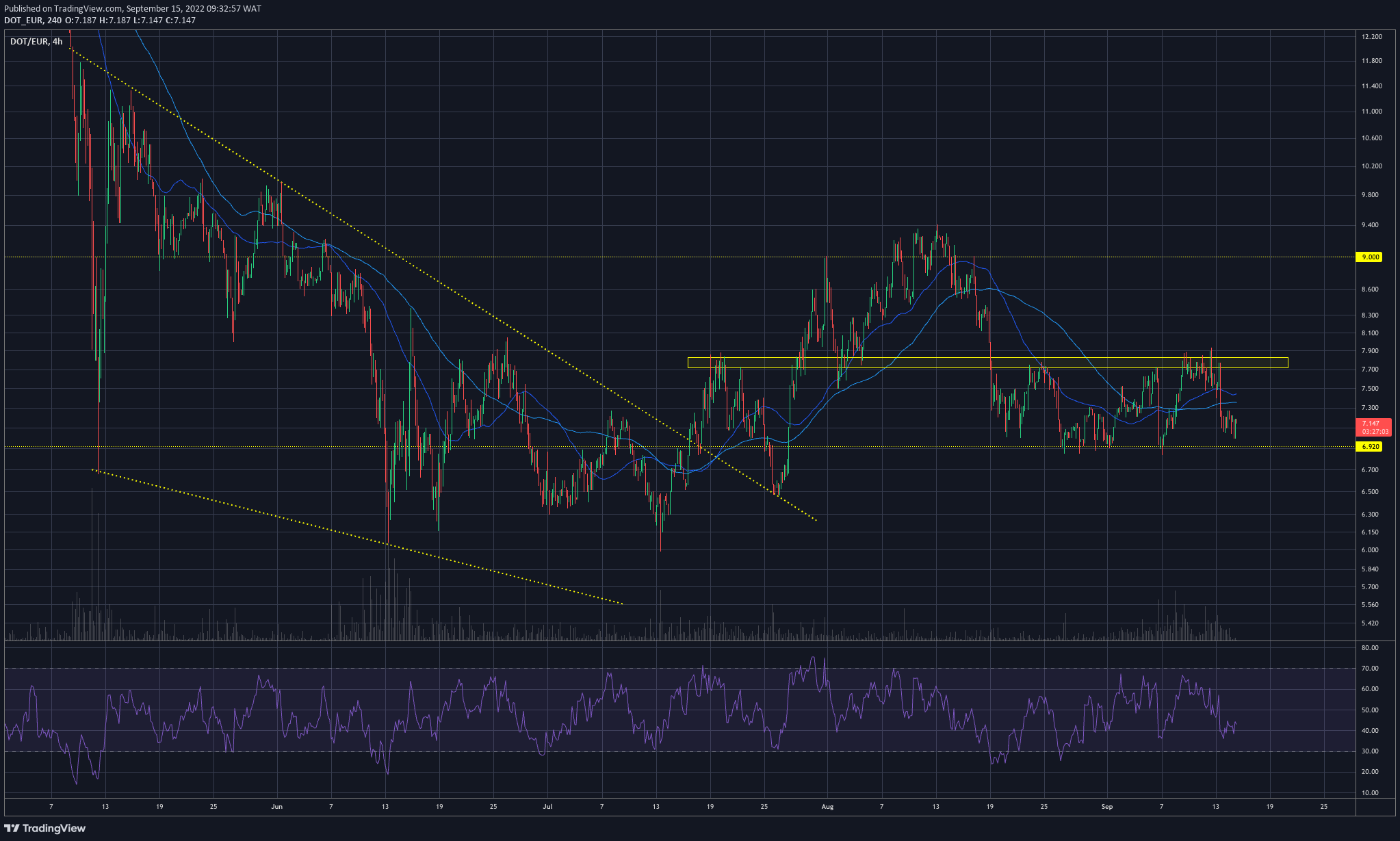 ADA bulls were not able to clear the €0.5 resistance level and the price moved back down again. There is a wide trading range forming with support above €0.425 and resistance of €0.5. 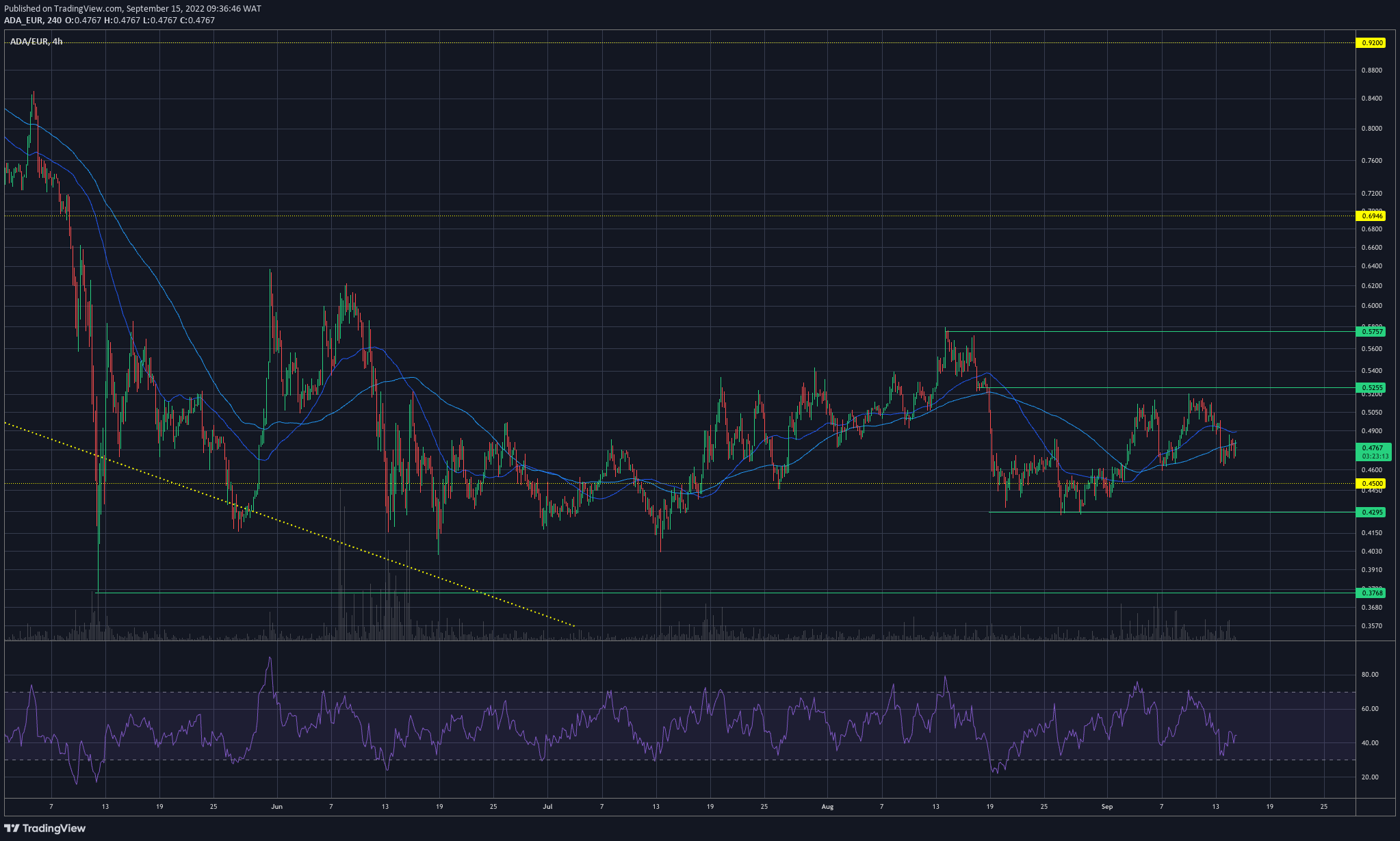 Disclaimer
This content is for informational purposes only and is not to be taken as financial advice. We highly recommend taking the time to do the necessary research before making any investment. Be aware that past performance is no indication of future results.