Ethereum and Litecoin all-time-highs, Dogecoin-rally and many more: the last was yet another busy week in the crypto-space.

-   Doge mania is not stopping

Ethereum is driving the market higher

Ethereum's rally is not stopping as the second biggest cryptocurrency surpassed the €3000 mark and printed 7 consecutive green monthly candles. Ethereum rose by another 20% over the weekend, which pushed the price over €3300. It skyrocketed 50% in May alone and extended its year-to-date return to 460%. Massive gains pushed the market cap to €370 billion, while its dominance increased to 20%, its highest since May 2018. 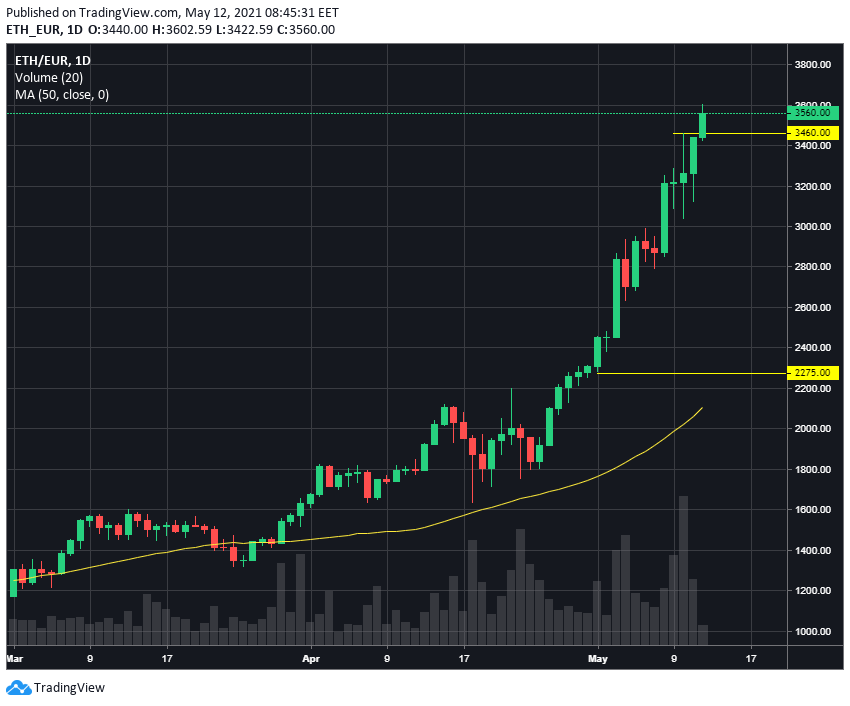 The price of ETH is driving upwards amid expectations that the network value might soar as even more investors warm to the potential of decentralised finance (DeFi) and other use cases like non-fungible tokens (NFTs), which run on the Ethereum blockchain. Interest is also growing from big institutional investors and Wall Street companies that are adding Ethereum to their portfolio. The latest big name stepping up in the crypto market is the company S&P Dow Jones Indices, which launched new cryptocurrency indices, bringing digital currencies including Bitcoin and Ethereum further into the mainstream via the trading floors of Wall Street. The new indices, the S&P Bitcoin Index, the S&P Ethereum Index and the S&P Crypto Mega Cap Index, will measure the performance of digital assets tied to them. The new financial products will enable the creation of customised indices and other benchmarking tools on cryptocurrencies.

Bitcoin is losing its dominance

Bitcoin is moving in Ethereum’s shadow and is trading below the technical hurdle of its 50-day average (MA) price on the daily chart at just under €48,000. The range trading under the MA is a bearish sign, but it's helping altcoins as they benefit from Bitcoin’s falling market cap. The altcoin markets have been in a bullish run since early March, also known as “Altcoin season” which dragged Bitcoin’s dominance down to 44%, its lowest since June 2018 and down from 72% at the beginning of the year. The lowest dominance ever recorded was in January 2018, when Bitcoin had a market share of just 35%. BTC is trading in a range between €39,000 and €54,000 and it's struggling to get back to the all-time-high recorded in the beginning of April. 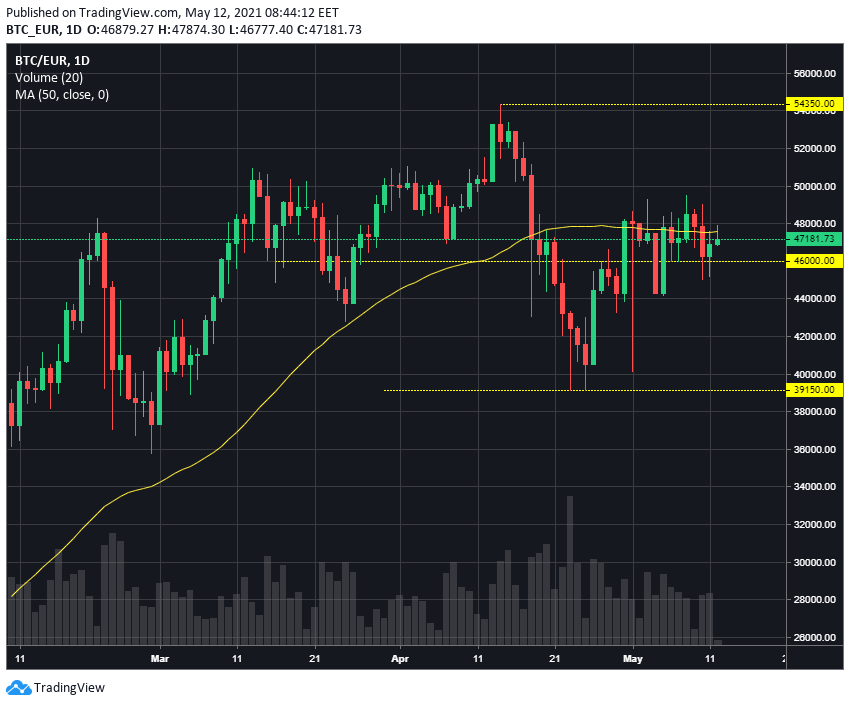 LINK flew past its previous all-time-highs with big green candles on a generally red day, after Upshot and Coinversation Protocol announced the integration of two of Chainlink’s products into their networks. LINK followed Ethereum in a bullish move and surged to €47 which is a new all-time-high. The price is now consolidating between its previous local high of €37 and all-time-high of €47. 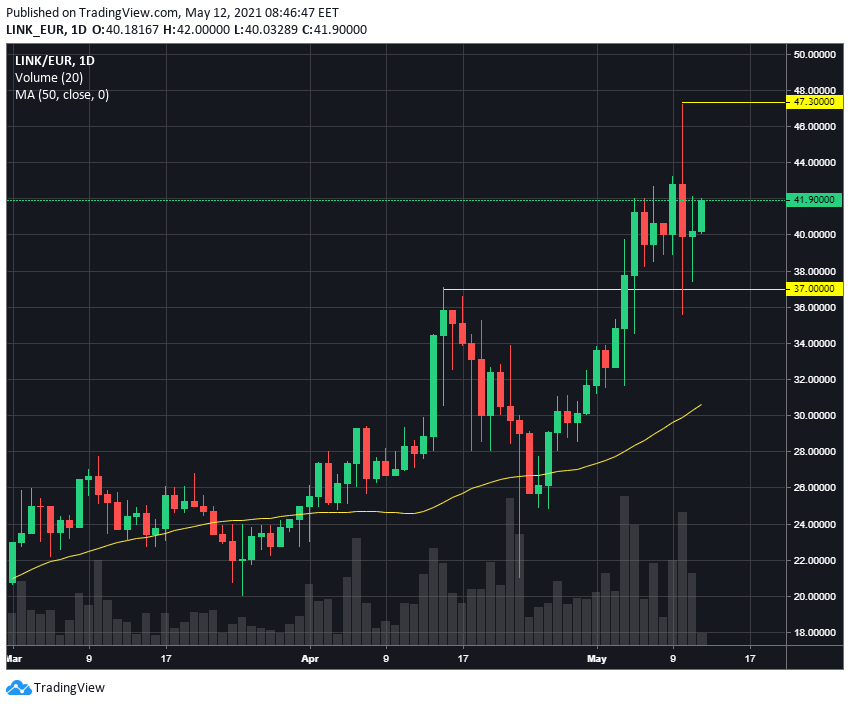 Litecoin is highly responsive to Bitcoin’s price movement but was lagging behind all the big cap names until recently. Last week was explosive for LTC as it blasted over its local high of €290 and peaked at €337. LTC was one of the rare big altcoins that finally surged over its 2017 high price and it is now in price discovery mode. 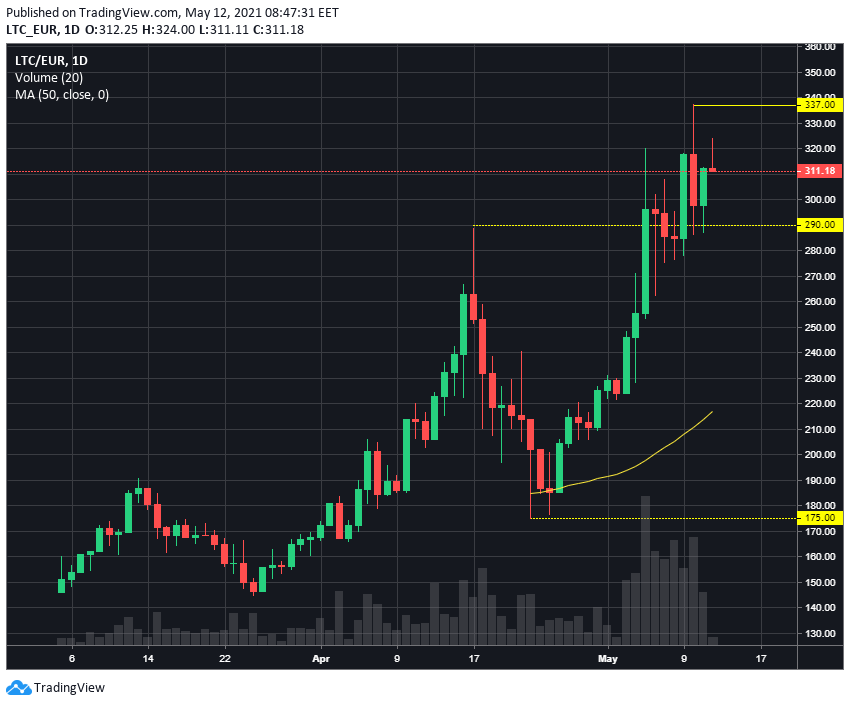 DOGE mania is not stopping

The mind-blowing ascent of the DOGE is not stopping. The meme token is now the fourth-most valuable crypto in the world, valued at around €60 billion. DOGE is now up 1,000% over a 30-day period. Elon Musk is fuelling the price with tweets and even started a Twitter poll asking whether Tesla should accept Dogecoin. Of course, most of the votes replied “Yes”. 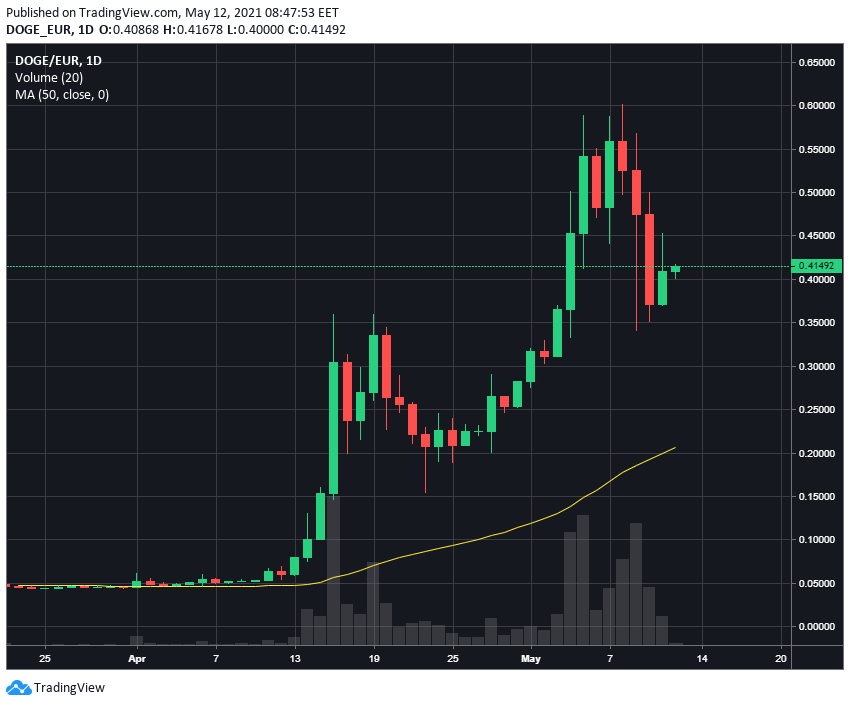 New token on our platform

Following our token expansion with CHZ and DOT, we also added ADA, the native token of the Cardano blockchain to our other popular fiat-to-crypto pairs. Cardano is a proof of stake blockchain platform: the first to be founded on peer-reviewed research and developed through evidence-based methods. Cardano's growing popularity pushed the token among the top 5 by market cap metrics and it is currently trading around €1.3.