What is a Bitcoin bull run?

You’ve probably heard the term Bitcoin bull run but might not be entirely sure what it means. Don’t worry, we’re here to break it down for you in simple, easy-to-understand terms.

What is a bull run?

No, we’re not talking about actual bulls running, we mean a metaphorical bull run. In simple terms, a bull run means there is an upward trend in the crypto (or stock, or precious metals) markets for an extended period of time. This can also be referred to as a bull or bullish market. Bull runs are exciting for investors who hold that particular asset because that means their return on investment is higher - AKA their asset is making money! This is the opposite of a bear or bearish market - which means the value of an asset decreases over an extended period of time, which is certainly not an exciting time for investors (unless you plan to buy more of the asset).

Where does the term “bull run” originate from? The term “bull” is thought to derive from the characteristics of the animal and how the animal attacks its opponents. To explain, a bull will thrust its horns up in the air when aggravated or fighting - this action is a metaphor for the bull pushing the prices up with its horns. On the other hand, a bear swipes its paws down when attacking - another metaphor for swiping the price of an asset down.

Why is it happening?

As we’ve stated above, a bull run happens when an asset rises in price - but why does the asset go up in the first place, you may ask? The reasons for this happening can be plentiful, particularly with Bitcoin, as there are a lot of different things at play. A bullish market for stocks can happen when the economy is in a state of growth or when technical innovation is presenting opportunities for investors. Since money is easier to spend when you have more of it, people invest more or continue to buy large quantities of an asset they already have when the economy is doing well and they have money, which then drives up the price due to supply and demand.

For this particular Bitcoin bull run, the reasons are varied. For example, well-known investors are showing positive sentiment towards Bitcoin, we are seeing a more mainstream adoption and increased institutional interest in Bitcoin, which is on its way to becoming more and more like digital gold.

How are Bitcoin Halvings connected to bull runs?

We can’t rely on history to determine the price of a digital asset since the market can be a volatile and unpredictable place. The value of an asset can crash as quickly as it rises, this is what makes investing a risk. However, we cannot deny that there have been certain patterns with bull runs in the past.

In the case of Bitcoin, there have consistently been upturns in the market after a Bitcoin Halving. Why? Because the Bitcoin Halving makes the asset more scarce, propelling investors to buy more in hopes that the price increases over the years due to its scarcity. You can read more about the Bitcoin Halving in our beginner’s article here before we take a look into past examples. 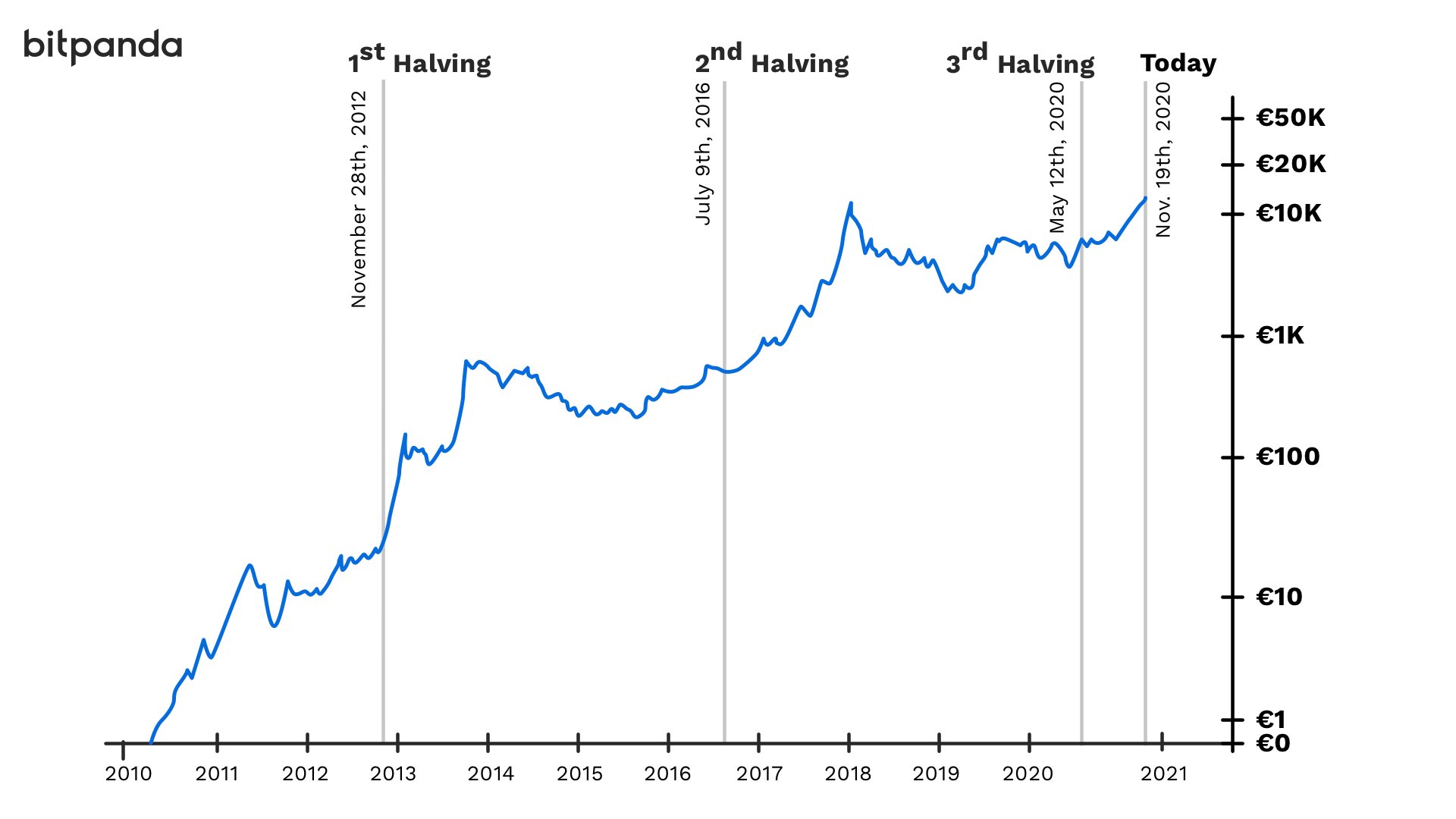 A year after the first Bitcoin Halving, which took place on the 29th of November in 2012, we saw an increase of more than 8069% where the Bitcoin price reached around $1,000 (USD).

As the price of Bitcoin started to slowly climb, those holding bitcoins couldn’t believe their luck. In 2012, investors could buy bitcoins at around $12 each, which then increased to approximately $1,124 during the bull run. You can imagine the celebration that followed for those who held onto their Bitcoin (and the frustration of those who sold too soon).

This first bull run was when Bitcoin started gaining popularity in the general public and people started to realise: Bitcoin was going places!

In October 2015, we saw a similar uptrend in the market which again we can assume was due to the upcoming Bitcoin Halving that took place on the 9th of July, 2016. Bitcoin had a (smaller) increase of 112% compared to the previous time, and the price of Bitcoin settled at about $650 (USD) per Bitcoin.

Investors were gaining confidence with Bitcoin now, and the asset entered a bull run in 2017 as it skyrocketed to $1,000 USD for the first time in three years!

We are now entering our third ever Bitcoin bull run at the end of 2020. If history tells us anything, this could be due to the Bitcoin Halving earlier this year in May 2020. But one thing is for sure: all the signs of a bullish market are there (see common traits of a bull market above) and as the price of Bitcoin continues to rise, I think we can safely assume that Bitcoin is about to enter its third bull run.

Head over to Bitpanda to start trading Bitcoin and over 50 other digital assets!

Disclaimer: The information contained in this article is for general purposes of information only and is not investment advice in any form.